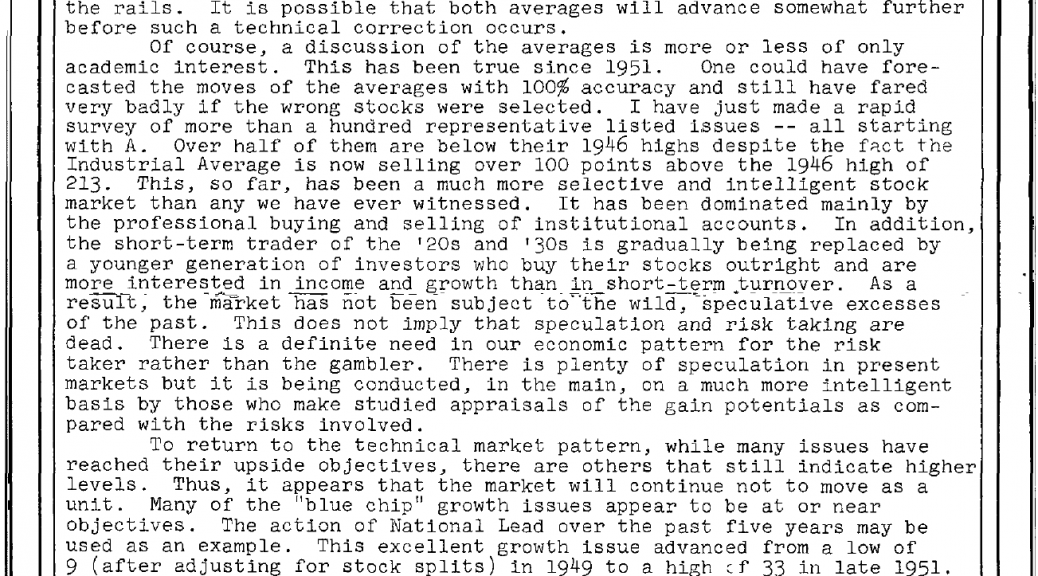 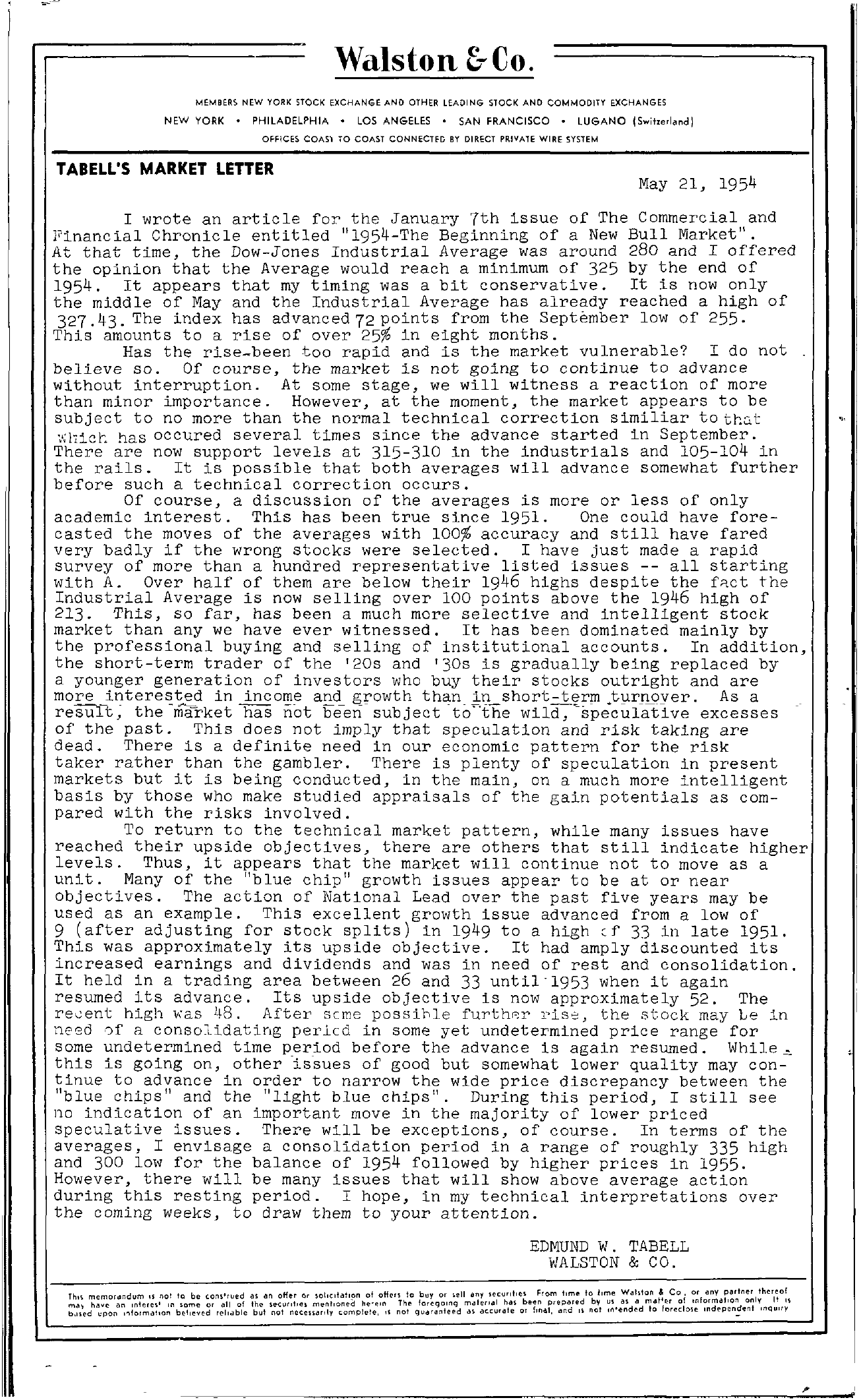 Walston &- Co. MEMBERS NEW YORK STOCK EXCHANGE AND OTHER LEADING STOCK AND COMMODITY EXCHANGES NEW YORK PHILADELPHIA LOS ANGELES SAN FRANCISCO LUGANO (Swiherland! OFFICES COAS) TO COAST CONNECHJ BY DIRECT PRlVATE WIRE SYSTEM TAB ELL'S MARKET LETTER May 21, 1954 I wrote an article for the January 7th issue of The Commercial and Financial Chronicle entitled 1954-The Beginning of a New Bull Market. At that time, the Dow-Jones Industrial Average was around 280 and I offered the opinion that the Average would reach a minimum of 325 by the end of 1954. It appears that my timing was a bit conservative. It is now only the middle of May and the Industrial Average has already reached a high of 327.43. The index has advanced 72 pOints from the September low of 255. This amounts to a rise of over 25 in eight months. Has the risebeen too rapid and is the market vulnerable I do not believe so. Of course, the market is not going to continue to advance without interruption. At some stage, we will witness a reaction of more than minor importance. However, at the moment, the market appears to be subject to no more than the normal technical correction similiar totht lict has occured several times since the advance started in September. There are now support levels at 315-310 in the industrials and 105-104 in the rails. It is possible that both averages will advance somewhat further before such a technical correction occurs. Of course, a discussion of the averages is more or less of only academic interest. This has been true since 1951. One could have fore- casted the moves of the averages with 100 accuracy and still have fared very badly if the wrong stocks were selected. I have just made a rapid survey of more than a hundred representative listed issues — all starting with A. Over half of them are below their 1946 highs despite the fct the Industrial Average is now selling over 100 points above the 1946 high of 213. ThiS, so far, has been a much more selective and intelligent stock market than any we have ever witnessed. It has been dominated mainly by the professional buying and selling of institutional accounts. In addition, the short-term trader of the '20s and '30s is gradually being replaced by a younger generation of investors who buy their stocks outright and are more interested in income and growth than in short-termurn9ver. As a resun; the -market has not be-en- subjectto'i;he Wild, -'speculative excesses of the past. This does not imply that speculation and risk taking are dead. There is a definite need in our economic pattern for the risk taker rather than the gambler. There is plenty of speculation in present markets but it is being conducted, in the main, on a much more intelligent basis by those who make studied appraisals of the gain potentials as compared with the risks involved. To return to the technical market pattern, while many issues have reached their upside objectives, there are others that still indicate higher levels. ThUS, it appears that the market will continue not to move as a unit. Many of the blue chip growth issues appear to be at or near objectives. The action of National Lead over the past five years may be used as an example. This excellent growth issue advanced from a low of 9 (after adjusting for stock splits) in 1949 to a high cf 33 in late 1951. This was approximately its upside objective. It had amply discounted its increased earnings and diVidends and was in need of rest and consolidation. It held in a trading area between 26 and 33 until '1953 when it again resumed its advance. Its upside objective is now approximately 52. The recent high was 48. After seme possihle furthRr rise, the stock may Le in need of a consolidating perlcd in some yet undetermined price range for some undetermined time period before the advance is again resumed. While this is going on, other 'issues of good but somewhat lower quality may con- tinue to advance in order to narrow the Wide price discrepancy between the blue chips and the light blue chips. During this period, I still see no indication of an important move in the majority of lower priced speculative issues. There will be exceptions, of course. In terms of the averages, I envisage a consolidation period in a range of roughly 335 high and 300 low for the balance of 1954 followed by higher prices in 1955. However, there will be many issues that will show above average action during this resting period. I hope, in my technical interpretations over the coming weekS, to draw them to your attention. EDMUND W. TABELL l-IALSTON & CO. ThIS rnemorilrldum .s no! la be (on'rlJed as an offer or sot,cllatlon 01 offers fo buy or sell any sccu.ill()S Flom time tOb tIme Wahlon Co i 0', any i'Hlne, lhefloS ma have an mlcres' In some or … 11 of bsed IIpon 1'110rmolhon b()lleved relIable the bul S!leocturnitcIeteslSmaerlnivtlonocmdplehlce,em's The not foregOIng guaranteed molSateariaulrahtaes been prepared or IlnCil, and IS If not us as /I mdo In'-ended to H 0 In foredole o.rnmdeapcIonneon 1'1 r I qUI l'