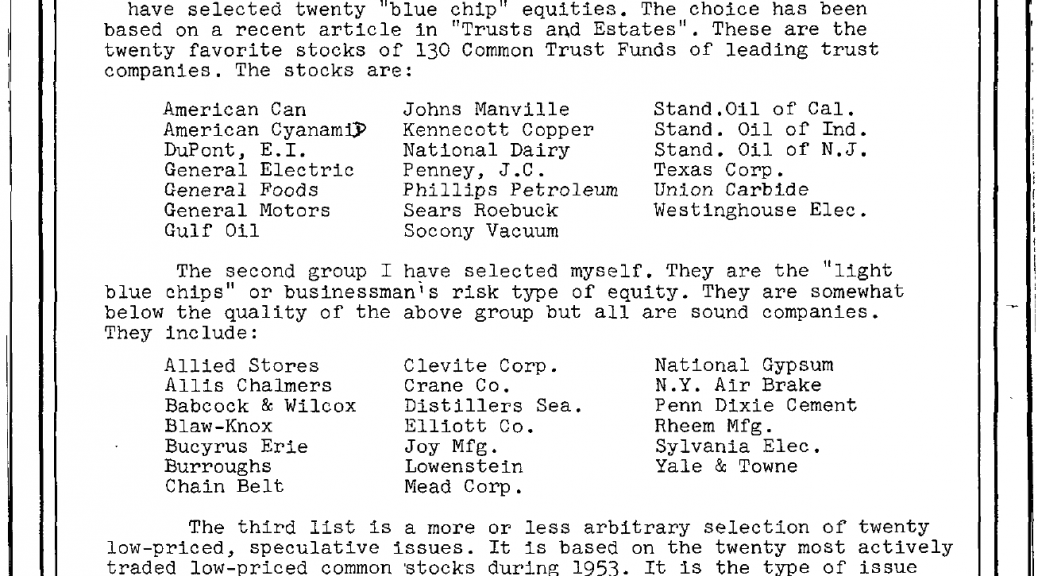 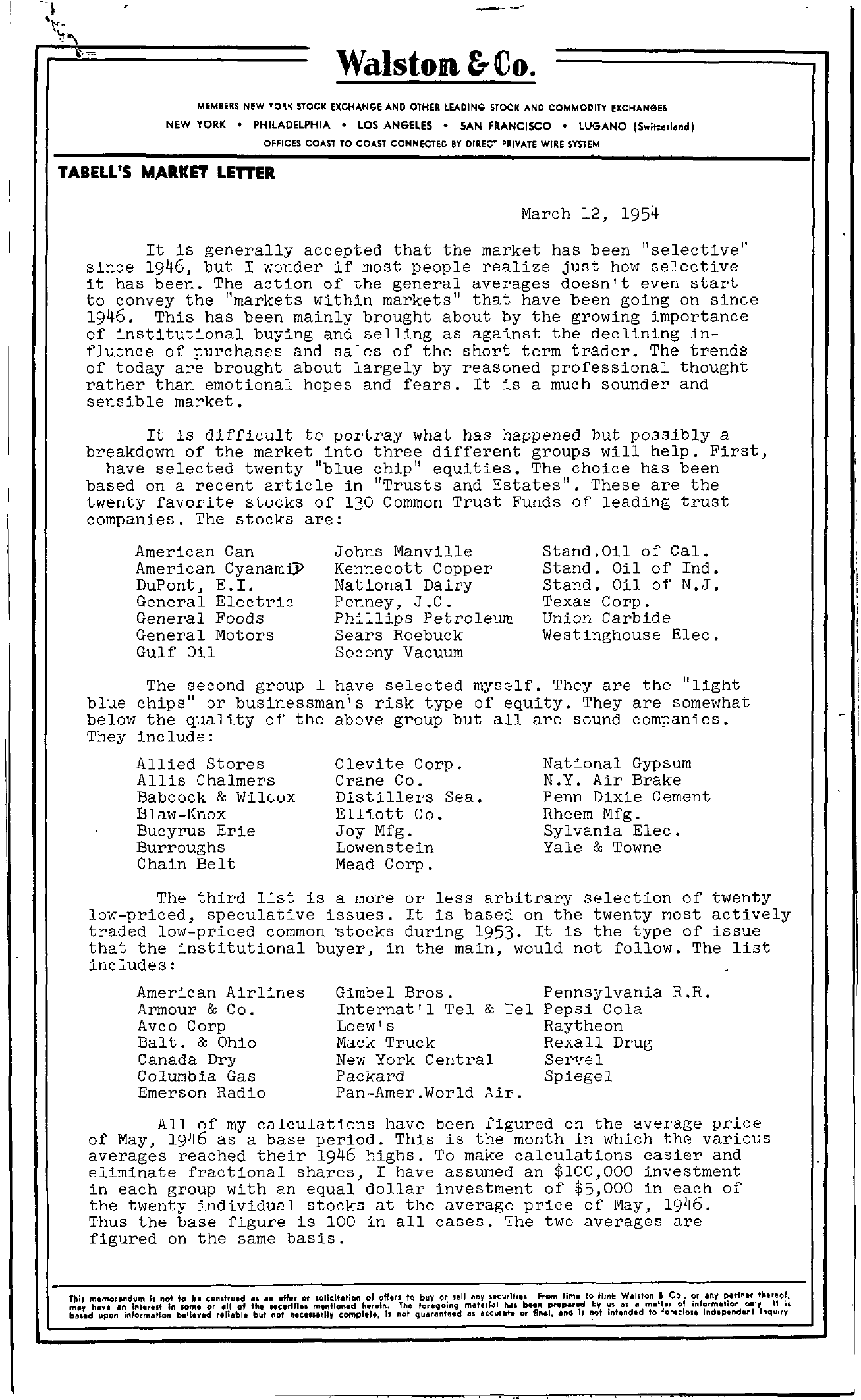 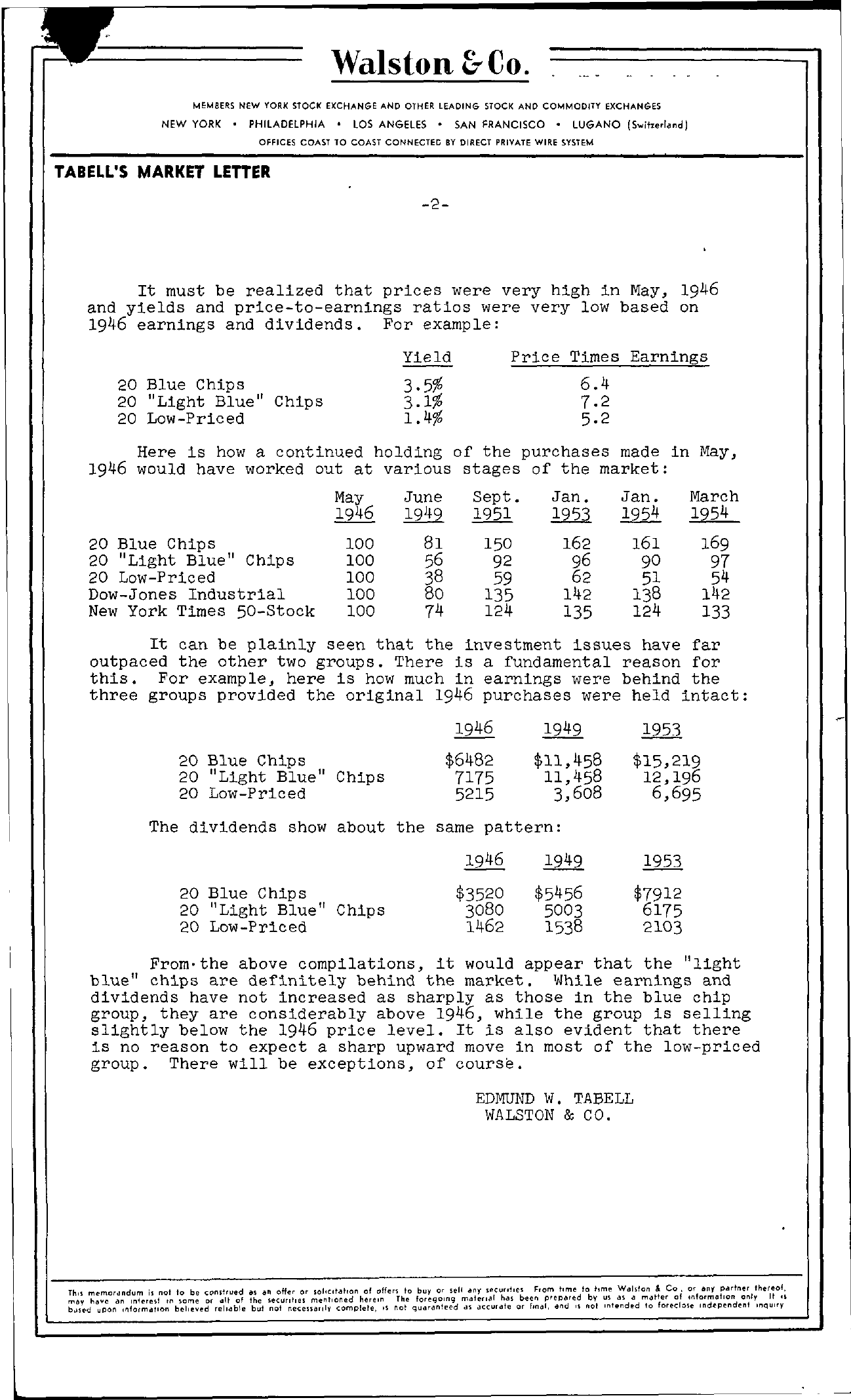 — Walston &Co. MEMBERS NEW YORK STOCK EXCHANGE AND OTHER LEADING STOCK AND COMMODITY EXCHANGES NEW YORK PHILADELPHIA LOS ANGELES SAN FRANCISCO LUGANO (Swit,l.nd) OFFICES COAST TO COAST CONNECTEC BY DIRECT PRIVATE WIRE SYSTEM TABELL'S MARKET LEnER March 12, 1954 It is generally accepted that the market has been selective since 1946, but I wonder if most people realize just how selective it has been. The action of the general averages doesn't even start to convey the markets within markets that have been going on since 1946. This has been mainly brought about by the growing importance of institutional buying and selling as against the declining in- fluence of purchases and sales of the short term trader. The trends of today are brought about largely by reasoned professional thought rather than emotional hopes and fears. It is a much sounder and sensible market. It is difficult to portray what has happened but possibly a breakdown of the market into three different groups will help. First, have selected twenty blue chip equities. The chOice has been based on a recent article in Trusts and Estates. These are the twenty favorite stocks of 130 Common Trust Funds of leading trust companies. The stocks are American Can American Cyanam DuPont, E. I. General Electric General Foods General Motors Gulf Oil Johns Manville Kennecott Copper National Dairy Penney, J.C. Phillips Petroleum Sears Roebuck Socony Vacuum Stand.Oil of Cal. Stand. Oil of Ind. Stand. Oil of N.J. Texas Corp. Union Carbide Westinghouse Elec. The second group I have selected myself. They are the light blue chips or businessman's risk type of eqUity. They are somewhat below the quality of the above group but all are sound companies. They include Allied Stores Allis Chalmers Babcock & Wilcox Blaw-Knox Bucyrus Erie Burroughs Chain Belt Clevite Corp. Crane Co. Distillers Sea. Elliott Co. Joy Mfg. Lowenstein Mead Corp. National Gypsum N.Y. Air Brake Penn Dixie Cement Rheem Mfg. Sylvania Elec. Yale & Towne The third list is a more or less arbitrary selection of twenty low-priced, speculative issues. It is based on the twenty most actively traded low-priced common 'stocks during 1953. It is the type of issue that the institutional buyer, in the main, would not follow. The list includes American Airlines Armour & Co. Avco Corp Balt. & Ohio Canada Dry Columbia Gas Emerson Radio Gimbel Bros. Pennsylvania R.R. Internat'l Tel & Tel Pepsi Cola Loew's Raytheon Mack Truck Rexall Drug New York Central Servel Packard Spiegel Pan-Amer.World Air. All of my calculations have been figured on the average price of May, 1946 as a base period. This is the month in which the various averages reached their 1946 highs. To make calculations easier and eliminate fractional shares, I have assumed an 100,000 investment in each group with an equal dollar investment of 5,000 in each of the twenty indiVidual stocks at the average price of May, 1946. Thus the base figure is 100 in all cases. The two averages are figured on the same basis. , .. Walston &Co. MEMBERS NEW YORK STOCK EXCHANGE AND OTHER LEADING STOCK AND COMMODITY EXCHANGES NEW YORK PHILADELPHIA LOS ANGELES SAN FRANCISCO LUGANO (Sw;t,.,Id) OFFICES COAST TO COAST CQNNECTEC. BY DIRECT PRIVATE WIRE SYSTEM TABELL'S MARKET LETTER -2- It must be realized that prices were very high in May, 1946 and yields and price-to-earnings ratios were very low based on 1946 earnings and dividends. For example 20 Blue Chips 20 Light Blue Chips 20 Low-Priced Yield 3.5 3.1 1.4 Price Times Earnings 6.4 7.2 5.2 Here is how a continued holding of the purchases made in May, 1946 would have worked out at various stages of the market May June Sept. Jan. Jan. March 1946 1949 1951 1953 1954 1954 20 Blue Chips 20 Light Blue Chips 20 Low-Priced Dow-Jones Industrial New York Times 50-Stock 100 100 100 100 100 81 150 56 92 38 59 80 135 74 124 162 161 169 96 90 97 62 51 54 142 138 142 135 124 133 It can be plainly seen that the investment issues have far outpaced the other two groups. There is a fundamental reason for this. For example, here is how much in earnings were behind the three groups provided the original 1946 purchases were held intact 1946 1949 1953 20 Blue Chips 20 Light Blue Chips 20 Low-Priced 6482 7175 5215 11,458 11,458 3,608 15,219 12,196 6,695 , The dividends show about the same pattern I 1946 1949 1953 20 Blue Chips 20 Light Blue Chips 20 Low-Priced 3520 3080 1462 5456 5003 1538 7912 6175 2103 Fromthe above compilations, it would appear that the light blue chips are definitely behind the market. While earnings and dividends have not increased as sharply as those in the blue chip group, they are considerably above 1946, while the group is selling slightly below the 1946 price level. It is also evident that there is no reason to expect a sharp upward move in most of the low-priced group. There will be exceptions, of course. EDMUND W. TABELL WALSTON & CO. ThIS mcl'nordndum is not to be construed as an offer or sol.eltaiton of offers to buy or sell (lny seCI,Jrot,(!s From t,me to t,me Walslon & Co. or any pilrtner thereof, mily have an Interest .n some or alt 01 the securd,e! mentioned here,n The foregOIng male,1 h(ls been prep'Ired by us as a matler 01 mfa.matlon only It IS bo.lsed upon ''Ormd/lon believed relldble but not necelscHlly comple!e, .1 no! qUiHdn1eed dl dccurd!e or flndl, dnd , not Intended to foreclole .ndependent InQUirY