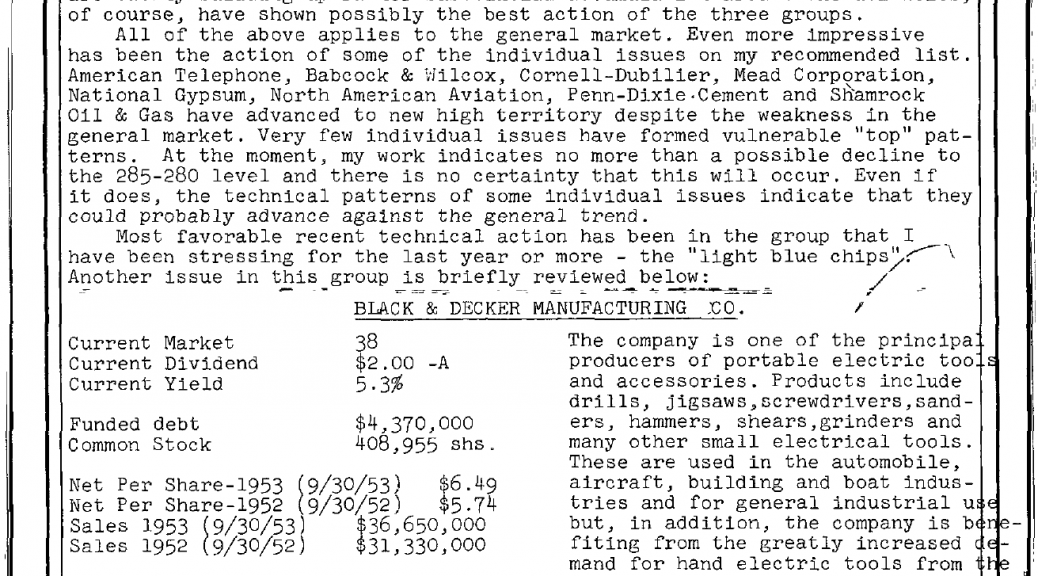 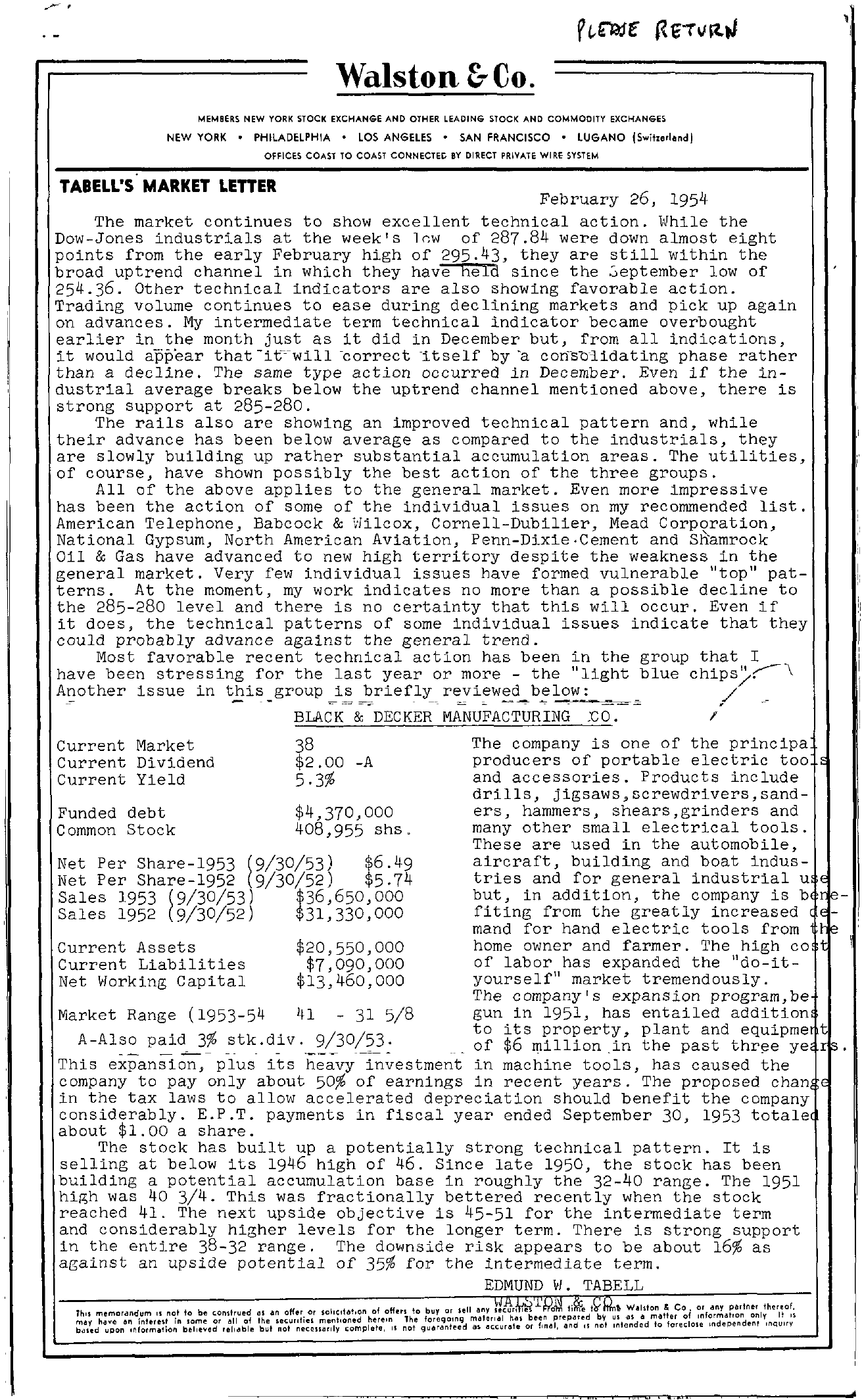 Walston &- Co. MEMBERS NEW YORI STOCK EXCHANGE AND OTHER LEADING STOCK AND COMMODITY EXCHANGES NEW YORK PHILADELPHIA LOS ANGELES SAN FRANCISCO LUGANO (Swlt,ldj OFFICES COAST TO COAST CONNECTEti BY DIRECT PRIVATE WIRE SYSTEM TABEll'S MARKET lETTER February 26, 1954 The market continues to show excellent technical action. While the Dow-Jones industrials at the week's lr.w of 287.84 were down almost eight pOints from the early February high of 295.43, they are still within the broad uptrend channel in which they have hela since the Jeptember low of 254.36. Other technical indicators are also showing favorable action. Trading volume continues to ease during declining markets and pick up again on advances. My intermediate term technical indicator became overbought earlier in the month just as it did in December but, from all indications, it would app'ear that -it-'will 'correct 'itself by 'a corfsoiidating phase rather than a decline. The same type action occurred in December. Even if the in- dustrial average breaks below the uptrend channel mentioned above, there is strong support at 285-280. The rails also are showing an improved technical pattern and, while their advance has been below average as compared to the industrials, they are slowly building up rather substantial accumulation areas. The utilities, of course, have shown possibly the best action of the three groups. All of the above applies to the general market. Even more impressive has been the action of some of the individual issues on my recommended list. American Telephone, Babcock & V1ilcox, Cornell-Dubilier, Mead Corporation, National Gypsum, North American AViation, Penn-DixieCement and Shamrock Oil & Gas have advanced to new high territory despite the weakness in the general market. Very few individual issues have formed vulnerable top pat- terns. At the moment, my work indicates no more than a possible decline to the 285-280 level and there is no certainty that this will occur. Even if it does, the technical patterns of some indiVidual issues indicate that they could probably advance against the general trend. Most favorable recent technical action has been in the group that I have been stressing for the last year or more – the light blue chiPs)r\ Another issue in t1is group J riefly reviwed blow ' / .. BLACK & DECKER MANUFACTURING O. I Current Market Current Dividend Current Yield 38 2.00 -A 5.3 Funded debt Common Stock 4,370,000 408,955 shs. Net Per Share-1953 (9/30/53) 6.49 Net Per Share-1952 (9/30/52) 5.74 Sales 1953 (9/30/53) 36,650,000 Sales 1952 (9/30/52) 31,330,000 Current Assets Current Liabilities Net Horking Capital 20,550,000 7,090,000 13,460,000 The company is one of the principa producers of portable electric too. and accessories. Products include drills, jigsaws,screwdrivers,sanders, hammers, shears,grinders and many other small electrical tools. These are used in the automobile, aircraft, building and boat industries and for general industrial U;E but, in addition, the company is b 'r fiting from the greatly increased ciE- mand for hand electric tools from ;rr home owner and farmer. The high co;t of labor has expanded the do-ityourself market tremendously. The company's expansion program,be Market Range (1953-54 41 – 31 5/8 gun in 1951, has entailed addition A-Al paicJ .stk .dv .30/53.. to of its property, 6 million.in plant and equipme t the past three ye'fI s This expansion, plus its heavy investment in machine tools, has caused the company to pay only about 50 of earnings in recent years. The proposed chanlE in the tax laws to allow accelerated depreciation should benefit the company considerably. E.P.T. payments in fiscal year ended September 30, 1953 totale about 1.00 a share. The stock has built up a potentially strong technical pattern. It is selling at below its 1946 high of 46. Since late 1950, the stock has been building a potential accumulation base in roughly the 32-40 range. The 1951 high was 40 3/4. This was fractionally bettered recently when the stock reached 41, The next upside objective is 45-51 for the intermediate term and considerably higher levels for the longer term. There is strong support in the enti.re 38-32 range. The downside risk appears to be about 16 as against an upside potential of 35 for the intermediate term. EDMUND vI. TABELL ,