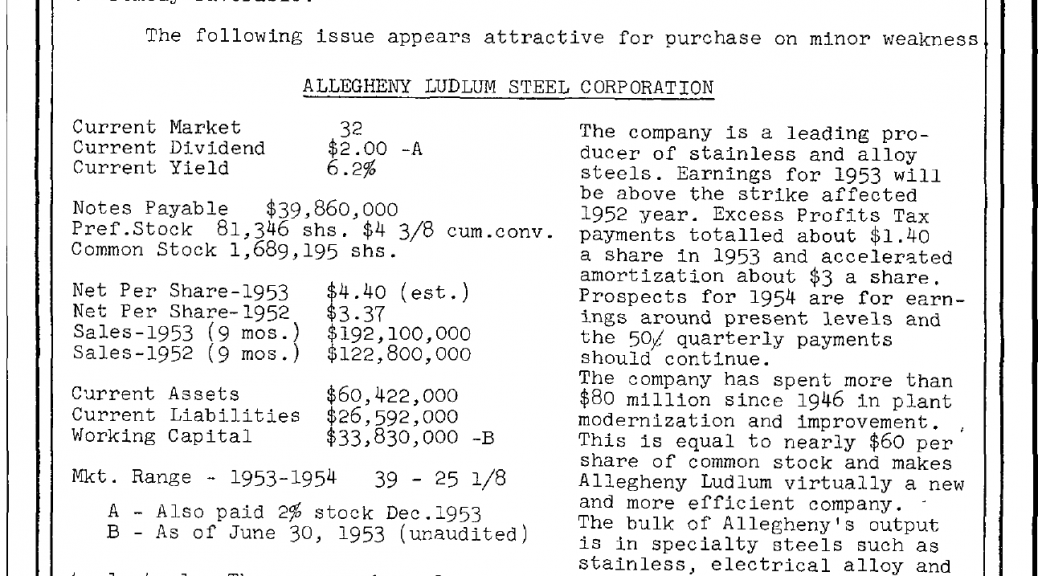 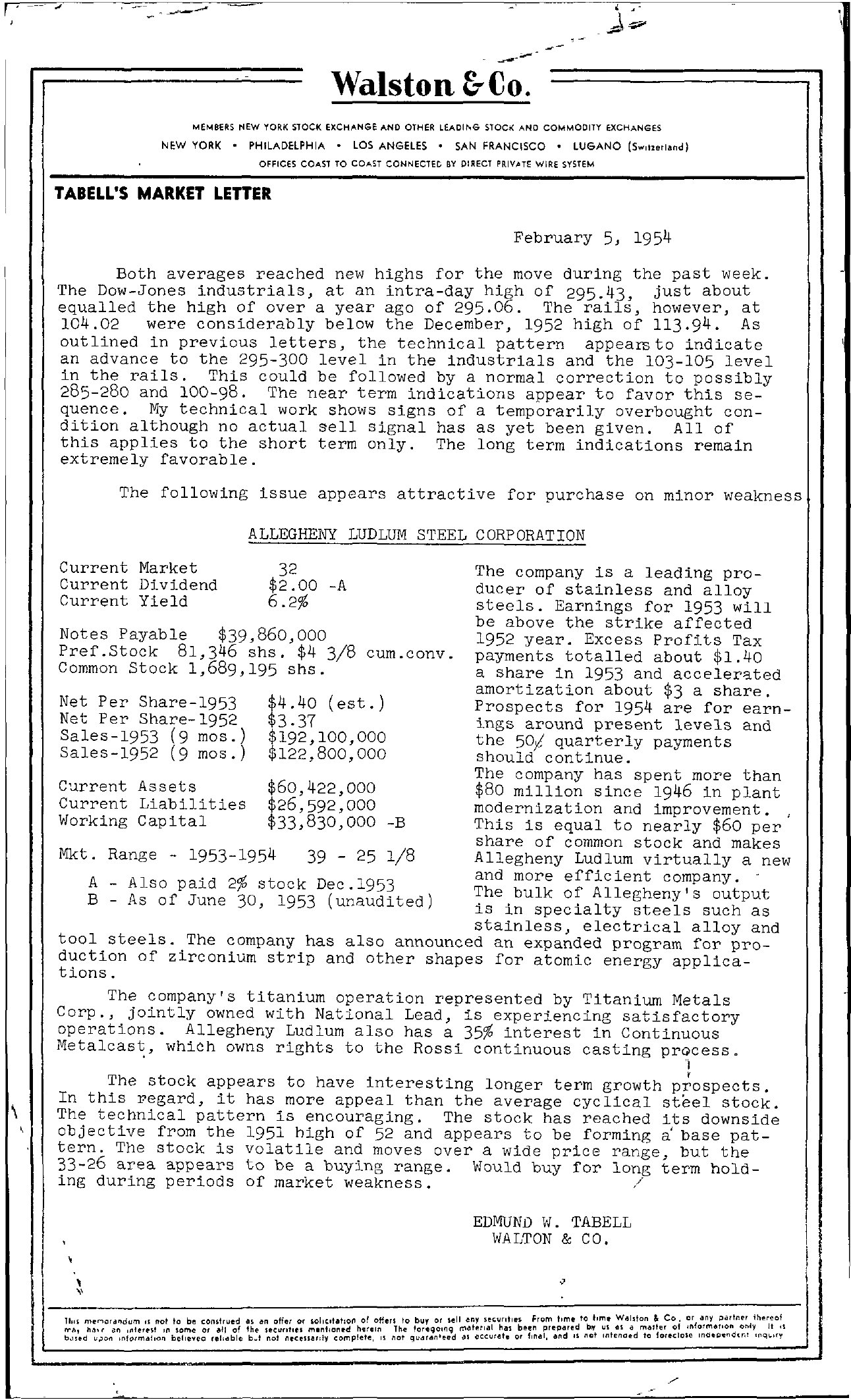 — Walston &Co. i MEMBERS NEW YORK STOCK EXCHANGE AND OTHER LEAOIr..G SlOCK AND COMMODITY EXCHANGES NEW YORK PHILADELPHIA LOS ANGELES SAN FRANCISCO LUGANO (Sw,,,,,,,,d) OFFICES COAST TO COAST CONNECTEC BY DIRECT PRIV,6TE WIRE SYSTEM TABELL'S MARKET LETTER February 5, 1954 Both averages reached new highs for the move during the past week. The Dow-Jones industrials, at an intra-day high of 295.43, just about equalled the high of over a year ago of 295.06. The rails, however, at 104.02 were considerably below the December, 1952 high of 113.94. As outlined in previous letters, the technical pattern appearsto indicate an advance to the 295-300 level in the industrials and the 103-105 level in the rails. This could be followed by a normal correction to possibly 285-280 and 100-98. The near term indications appear to favor this sequence. My technical work shows signs of a temporarily overbought condition although no actual sell signal has as yet been given. All of this applies to the short term only. The long term indications remain extremely favorable. The following issue appears attractive for purchase on minor weakness ALLEGHENY LUDLUM STEEL CORPORATION Current Market Current Dividend Current Yield 32 2.00 -A 6.2 The company is a leading pro- ducer of stainless and alloy steels. Earnings for 1953 will Notes Payable 39,860,000 Pref.Stock 81,346 shs. 4 3/8 cum.conv. Common Stock 1,689,195 shs. be above the strike affected 1952 year. Excess Profits Tax payments totalled about 1.40 a share in 1953 and accelerted Net Per Share-1953 Net Per Share-1952 Sales-1953 (9 mos.) Sales-1952 (9 mos.) 4.40 (est.) 3.37 192,100,000 122,800,000 amortization about 3 a share. Prospects for 1954 are for earnings around present levels and the 50/ quarterly payments should continue. Current Assets 60,422,000 Current Liabilities 26,592,000 Horking Capital 33,830,000 -B The company has spent more than 80 million since 1946 in plant modernization and improvement. , This is equal to nearly 60 per Mkt. Range – 1953-1954 39 – 25 1/8 share of common stock and makes Allegheny Ludlum virtually a new A – Also paid 2 stock Dec.1953 B – As of June 30, 1953 (unaudited) and more efficient company. The bulk of Allegheny's output is in specialty steels such as stainless, electrical alloy and tool steels. The company has also announced an expanded program for pro- duction of zirconium strip and other shapes for atomic energy applications. The company's titanium operation represented by Titanium Metals Corp., jointly owned with National Lead, is experiencing satisfactory operations. Allegheny Ludlum also has a 35 interest in Continuous Metalcast, which owns rights to the Rossi continuous casting process. ,, 'I The stock appears to have interesting longer term growth prospects. In this regard, it has more appeal than the average cyclical steel stock. \ The technical pattern is encouraging. The stock has reached its downside objective from the 1951 high of 52 and appears to be forming a' base pat- tern. The stock is volatile and moves over a wide price range, but the 33-26 area appears to be a buying range. WOUld buy for long term hold- ing during periods of market weakness. / EDMUND W. TABELL , HALTON & CO. , \' 11, meMordl'ldum ,I not tbr.iBl,edhllu,on,HI,nf,loIriemraesll!ollIn to be cOlulrued some or 'll of b(lllll'v(lO rel,able CIS an offer or sol,e,tatton tbhet UCLlflt.U mlntloned not neceulItlly comp 0 f 0ff ers 10 h1!reln The fbourye9orlngsedII111r\cc' a(l!rceuhtanseobsreefinFnraolpmreilptniadmreeIdS lete, IS not gll,Hilll e(l')1 II II , tobh nelt mUIe IWn/llatomnat&lerCoof. o.nrfoarnmy lllpiaornlnoerlllytherIeI ofII Inte-nded to foreclo(l lndepO!nd(r,! 'q …. ry