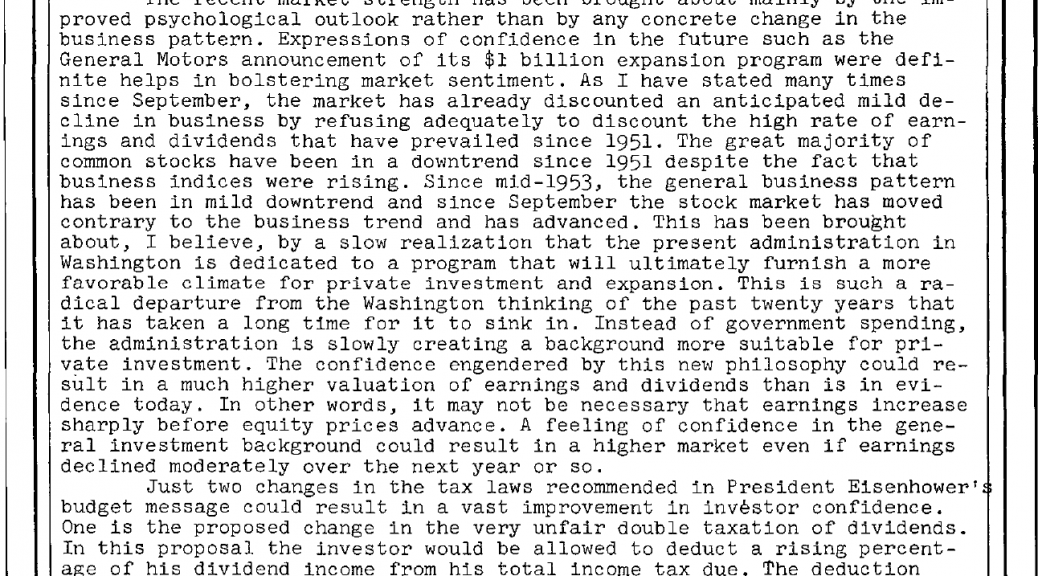 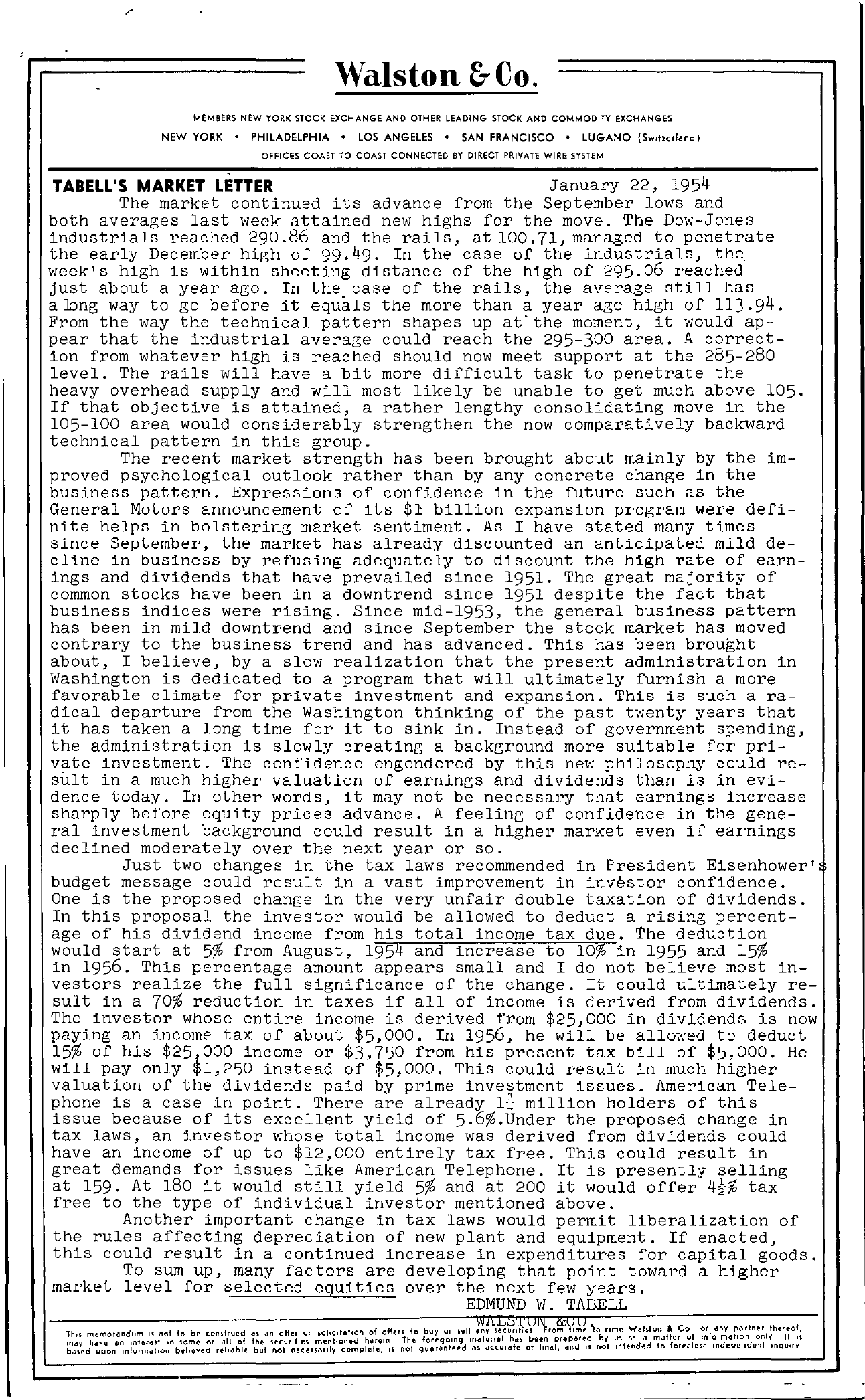 -r. Walston &- Co. MEMBERS NEW YORK STOCK EXCHANGE AND OTHER LEADING STOCK AND COMMODITY EXCHANGES NEW YORK PHILADELPHIA LOS ANGELES SAN FRANCISCO LUGANO (Sw,h,dd) OFFICES COAST TO COAST CONNECTEC BY DIRECT PRIVATE WIRE SYSTEM TAB Ell'S MARKET lETTER January 22, 1954 The market continued its advance from the September lows and both averages last week attained new highs for the move. The Dow-Jones industrials reached 290.86 and the rails, at 100.71, managed to penetrate the early December high of 99.49. In the case of the industrials, the week's high is within shooting distance of the high of 295.06 reached just about a year ago. In the case of the rails, the average still has ang way to go before it equals the more than a year ago high of 113.94. From the way the technical pattern shapes up at the moment, it would ap- pear that the industrial average could reach the 295-300 area. A correct- ion from whatever high is reached should now meet support at the 285-280 level. The rails will have a bit more difficult task to penetrate the heavy overhead supply and will most likely be unable to get much above 105. If that objective is attained, a rather lengthy consolidating move in the 105-100 area would considerably strengthen the now comparatively backward technical pattern in this group. The recent market strength has been brought about mainly by the im- proved psychological outlook rather than by any concrete change in the business pattern. Expressions of confidence in the future such as the General Motors announcement of its 1 billion expansion program were defi- nite helps in bolstering market sentiment. As I have stated many times since September, the market has already discounted an anticipated mild de- cline in business by refusing adequately to discount the high rate of earn- ings and dividends that have prevailed since 1951. The great majority of common stocks have been in a downtrend since 1951 despite the fact that business indices were rising. Since mid-1953, the general business pattern has been in mild downtrend and since September the stock market has moved contrary to the business trend and has advanced. This has been brought about, I believe, by a slow realization that the present administration in Washington is dedicated to a program that will ultimately furnish a more favorable climate for private investment and expansion. This is such a ra- dical departure from the Washington thinking of the past twenty years that it has taken a long time for it to sink in. Instead of government spending, the administration is slowly creating a background more suitable for pri- vate investment. The confidence engendered by this new philosophy could re- sult in a much higher valuation of earnings and dividends than is in eVi- dence today. In other words, it may not be necessary that earnings increase sharply before equity prices advance. A feeling of confidence in the gene- ral investment background could result in a higher market even if earnings declined moderately over the next year or so. Just two changes in the tax laws recommended in President Eisenhower' budget message could result in a vast improvement in investor confidence. One is the proposed change in the very unfair double taxation of dividends. In this proposal the investor would be allowed to deduct a rising percent- age of his dividend income from his total income tax due. The deduction would start at 5 from August, 1954 and increase to 10 in 1955 and 15 in 1956. This percentage amount appears small and I do not believe most in- vestors realize the full significance of the change. It could ultimately re- sult in a 70 reduction in taxes if all of income is derived from dividends. The investor whose entire income is derived from 25,000 in dividends is now paying an income tax of about 5,000. In 1956, he will be allowed to deduct 15 of his 25,000 income or 3,750 from his present tax bill of 5,000. He will pay only 1,250 instead of 5,000. This could result in much higher valuation of the dividends paid by prime investment issues. American Tele- phone is a case in point. There are already l million holders of this issue because of its excellent yield of 5.6.Under the proposed change in tax laws, an investor whose total income was derived from dividends could have an income of up to 12,000 entirely tax free. This could result in great demands for issues like American Telephone. It is presently selling at 159. At 180 it would still yield 5 and at 200 it would offer 4 tax free to the type of individual investor mentioned above. Another important change in tax laws would permit liberalization of the rules affecting depreciation of new plant and equipment. If enacted, this could result in a continued increase in expenditures for capital goods. To sum up, many factors are developing that point toward a higher market level for selected equities over the next few years. EDMUND vi. TABELL