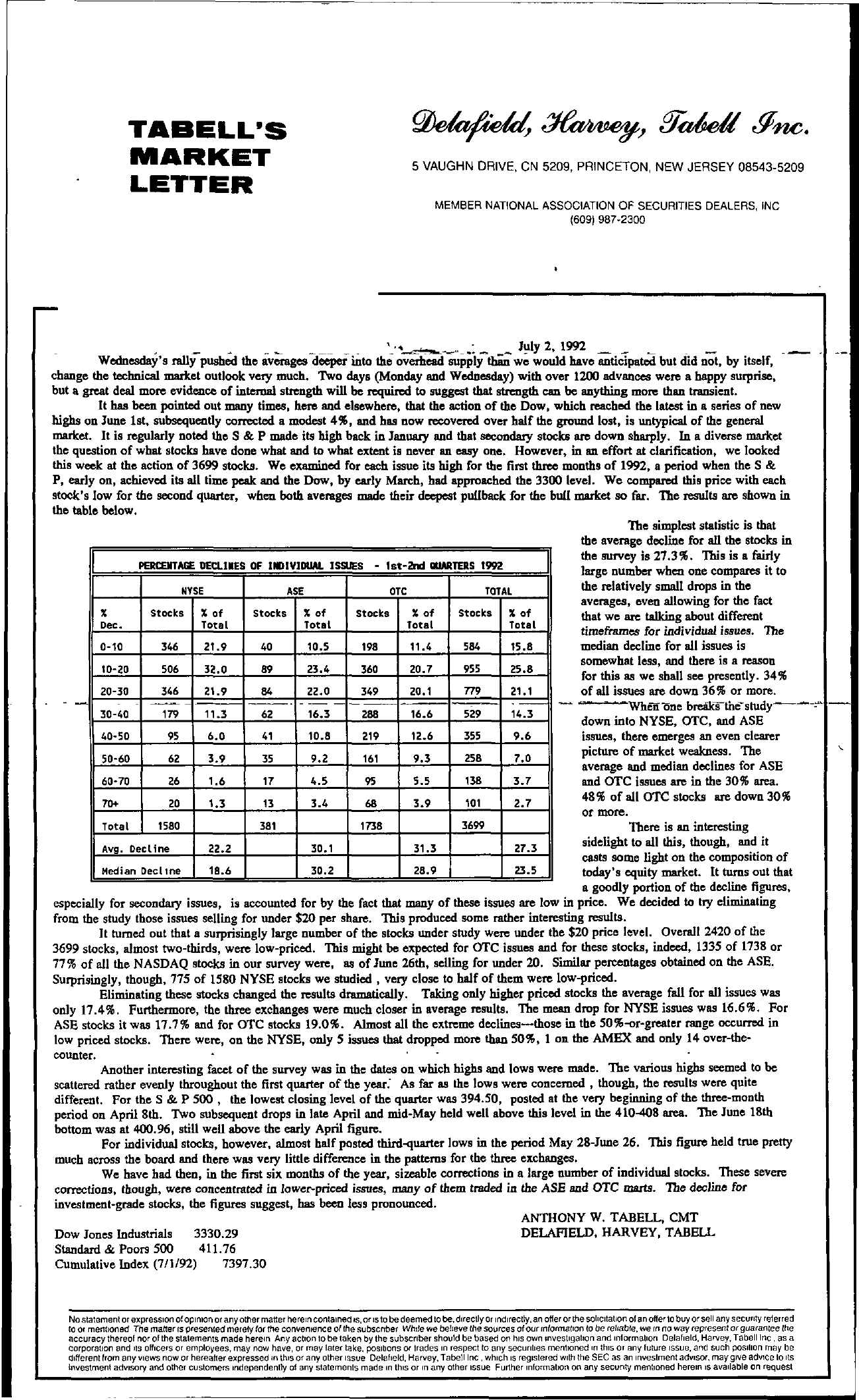 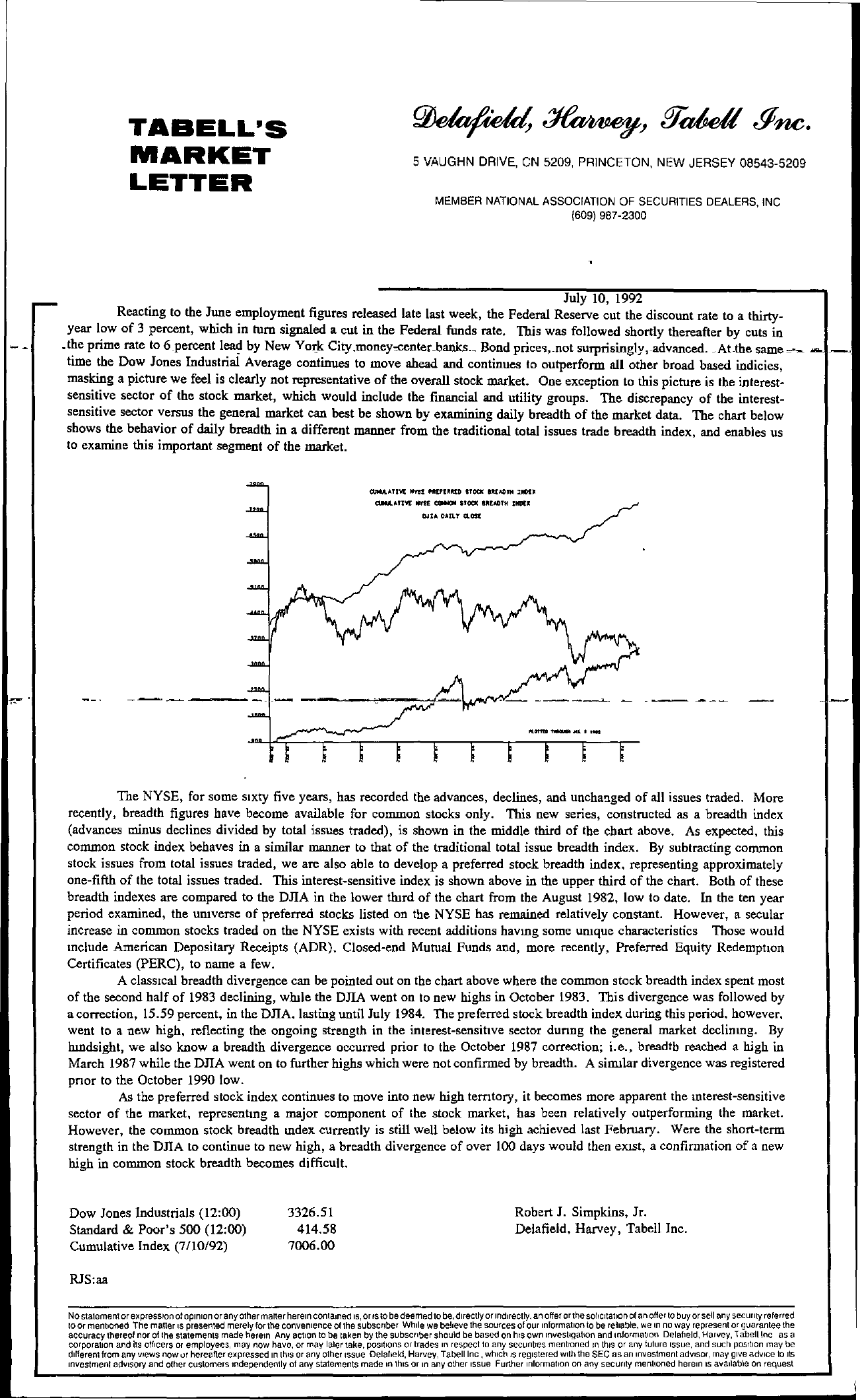 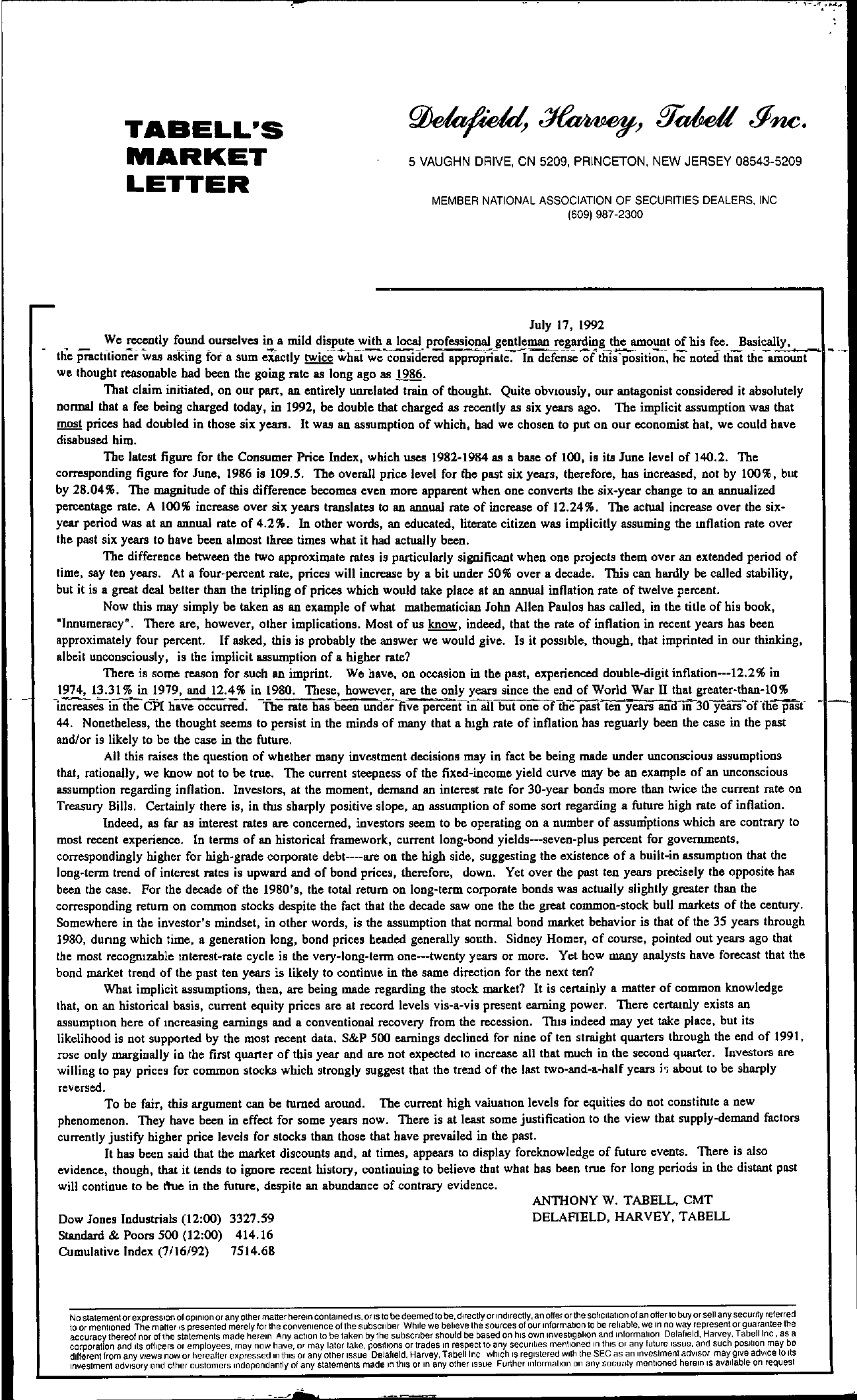 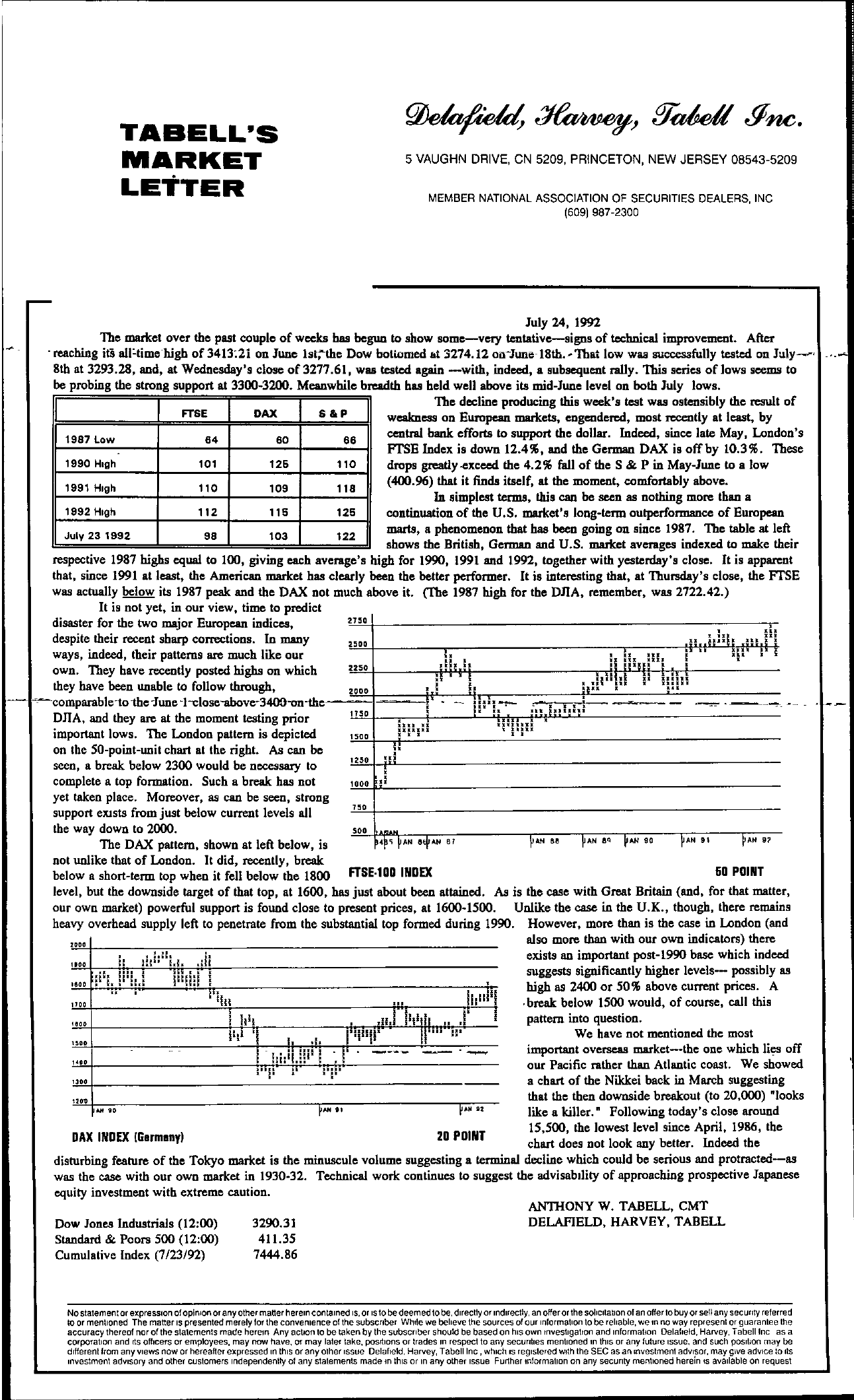 TABELL9 S MARKET LETTER 5 VAUGHN DRIVE, CN 5209, PRINCETON, NEW JERSEY 08543-5209 MEMBER NATIONAL ASSOCIATION OF SECURITIES DEALERS, INC (609) 987-2300 July 24, 1992 The DIIIrlet over the past couple of weeks has begun to show some-very tentative-signs of technical improvement. After – reacbing itS all'time-high of 3413;21 on June lsI;-the Dow bouomed at 3274.12 on-June-18th.-That low was successfully tested on July-' ,,- 8th at 3293.28, and, at Wednesday's close of 3277.61 , was tested again -with, indeed, a subsequent rally. This series oflows seems to be probing the strong support at 3300-3200. Meanwhile breadth has held well above its mid-June level on both July lows. I I I I IFTSE The decline producing this week's test was ostensibly the result of DAX SloP weakness on European DIIIrlets, engendered, most recently at least, by 1987 Low 64 60 66 central bank efforts to support the dollar. Indeed, since late May, London's FrSE Index is down 12.4, and the German DAX is off by 10.3. These 1990 HIgh 101 125 110 drops greatly -exceed the 4.2 fall of the S & P in May-June to a low 1991 HIgh 110 109 1t 8 (400.96) that it finds itself, at the moment, comfortsbly above. In simplest terms, this can be seen as nothing more than a 1992 HIgh 1 t2 115 125 continuation of the U.S. DIIIrlet's long-term outperformance of European July 23 1992 98 103 marts, a phenomenon that has been going on since 1987. The table at left 122 shows the British, German and U.S. DIIIrlet averages indexed to make their respecltve 1987 highs equal to 100, giving each average's high for 1990, 1991 and 1992, together with yesterday's close. It is apparent that, since 1991 at least, the American market has clearly been the better performer. It is interesting that, at Thursday's close, the FrSE was actually below its 1987 peak and the DAX not much above it. (The 1987 high for the DnA, remember, was 2722.42.) It is not yet, in our view. time to predict disaster for the two major European indices, 2750 …despite their recent sharp corrections. In many r ..ways, indeed, their patterns are much like our ii.own. They have recently posted highs on which .. ..they have been unable to follow through, – -comparable-to -tbe -June -I—close-above-3400'on-the ……. …..DJIA, and tbey are at th. moment testing prior …..important lows. The London pattern is depicted Z500 2250 2000 1150 1500 ' I,I. I ,' … u , XI Jhh lUJI h ,I II III g B!!;u i ;. I ! i,'–,- hlI ,,I I. ' hu.i ,;.. h hh, . – , , I …. ..on the 50-point-unit cbart at the right. As can be ..seen, a break below 2300 would be necessary to ..complete a top formation. Such a break has not 12.50 ,, ,, 1000 yet taken place. Moreover, as can be seen, strong support eXlsts from just below current levels all ' the way down to 2000. The DAX pattern, shown at left below, is SO. 14p AN etfAN B1 4N 8e PAN 11'1 PAN 90 AN 91 AN 9 not unlike that of London. It did, recently, break below a short-term top wben it fell below tbe 1800 FTSEl00 INDEX 50 POINT level, but tbe downside target of that top, at 1600, bas just about been attained. As is the case witb Great Britain (and, for that matter, our own market) powerful support is found close to present prices, at 1600-1500. Unlike the case in the U.K., though, tbere remains heavy overhead supply left to penetrate from the substantial top formed during 1990. However, more than is the case in London (and .lOOO m'. .iinoD II , I, 1&00 ii !i! ,1.1I 110D 1800 ISOO 1'00 III!ii! I , I'ihl Ihllll! ….,.. – – .r– ! hll pl 'I I ''1I.,'1,.,10I .n.!'' I'lillii' 1IIIHIh…. ,I' . …. -.- II' ! p p I;' UOO also more than with our own indicators) there exists an important post-1990 base which indeed suggests significantly higher levels– possibly as high as 2400 or 50 above current prices. A .break below 1500 would, of course, call this pattern into question. We have not mentioned the most important overseas market–the one which li off our Pacific rather than Atlantic coast. We sbowed a chart of the Nikkei back in March suggesting that the then downside breakout (to 20,000) 'looks .AN .N 82 like a killer.' Following today's close around OAX INDEX (Garmany) 20 POINT 15,500, the lowest level since April, 1986, tbe chart does not look any better. Indeed the disturbing feature of the TokYO DIIIrlet is the minuscule volume suggesting a terminal decline whicb could be serious and protracted-as was tbe case with our own market in 1930-32. Technical work continues to suggest the advisability of approacbing prospective Japanese equity investment with extreme caution. ANTIIONY W. TABELL, CMT Dow Jones Industrials (1200) 3290.31 DELAAELD,HARVEY,TABELL Standard & Poors 500 (1200) 411.35 Cumulative Index (7123/92) 7444.86 No statement or expression of oplnlon or any other matter herein contained IS, or IS to be deemed to be, directly or indirectly, an offeror the soliCitation of an offerlo buy or sell any secuflty referred to or mentioned The matter IS presented merely for the convenience of the subscrtber Whtle we beheve the sources of our Information to be rehable, we In no way represent or guarantee the accuracy thereof nor of the statements made herem Any acllOn to be taken by the subsCriber should be based on hiS own Invesllgahon and Information Delafield, Harvey, Tabellinc as a corporation and lis officers or employees, may now have, or may later take, positions or trades In respect to any securl!les mentioned In thiS or any future Issue, and such pOSItion may be different from any views now or hereafter expressed In thiS or any other Issue Delafield, Harvey, Tabellinc , whICh IS registered With the SEC as an Investment adVisor, may give adVice to Its Investment adVISOry and other customers Independently of any statements made in thiS or In any other Issue Further Informallon on any secuflty menlloned herein IS available on request 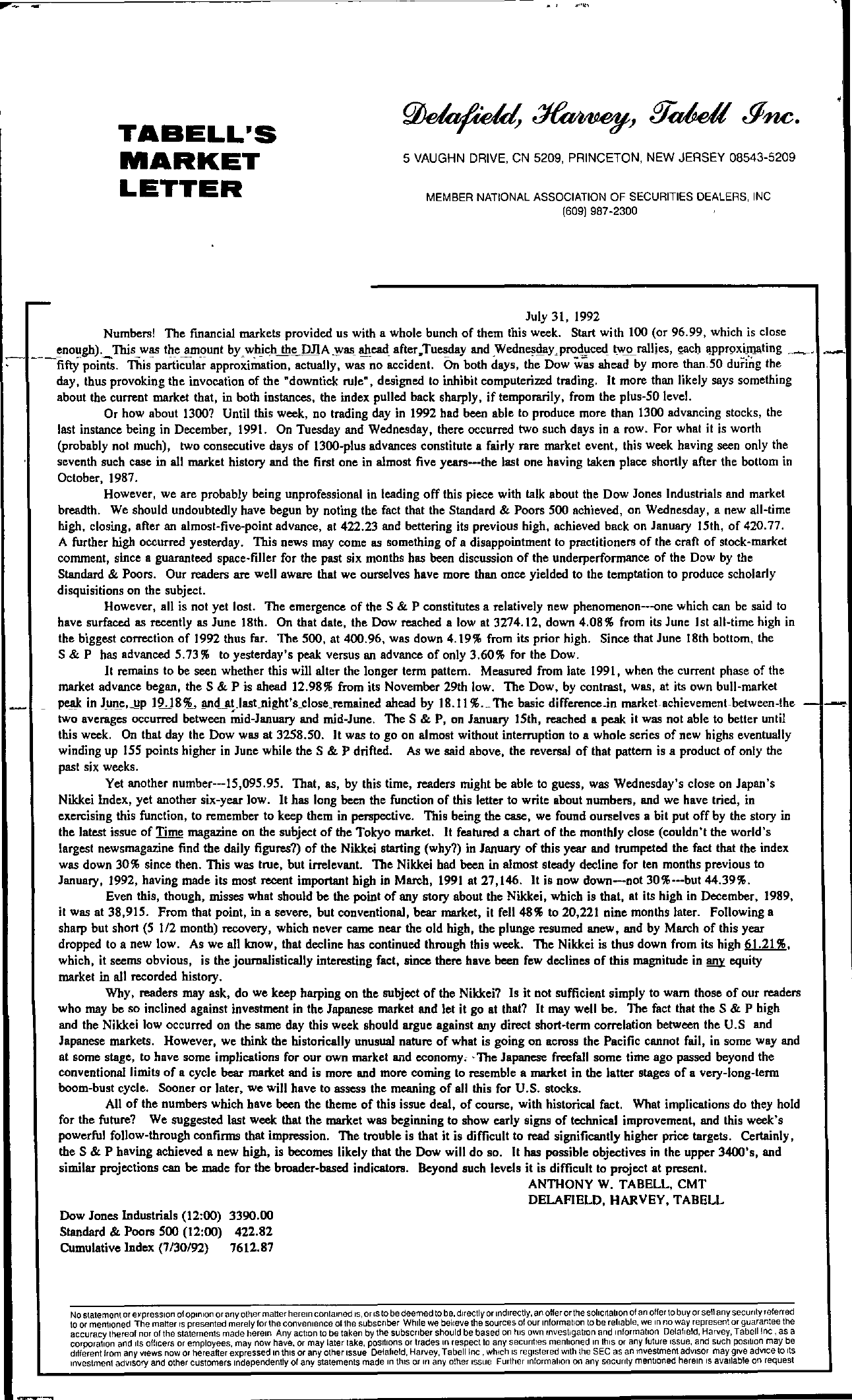