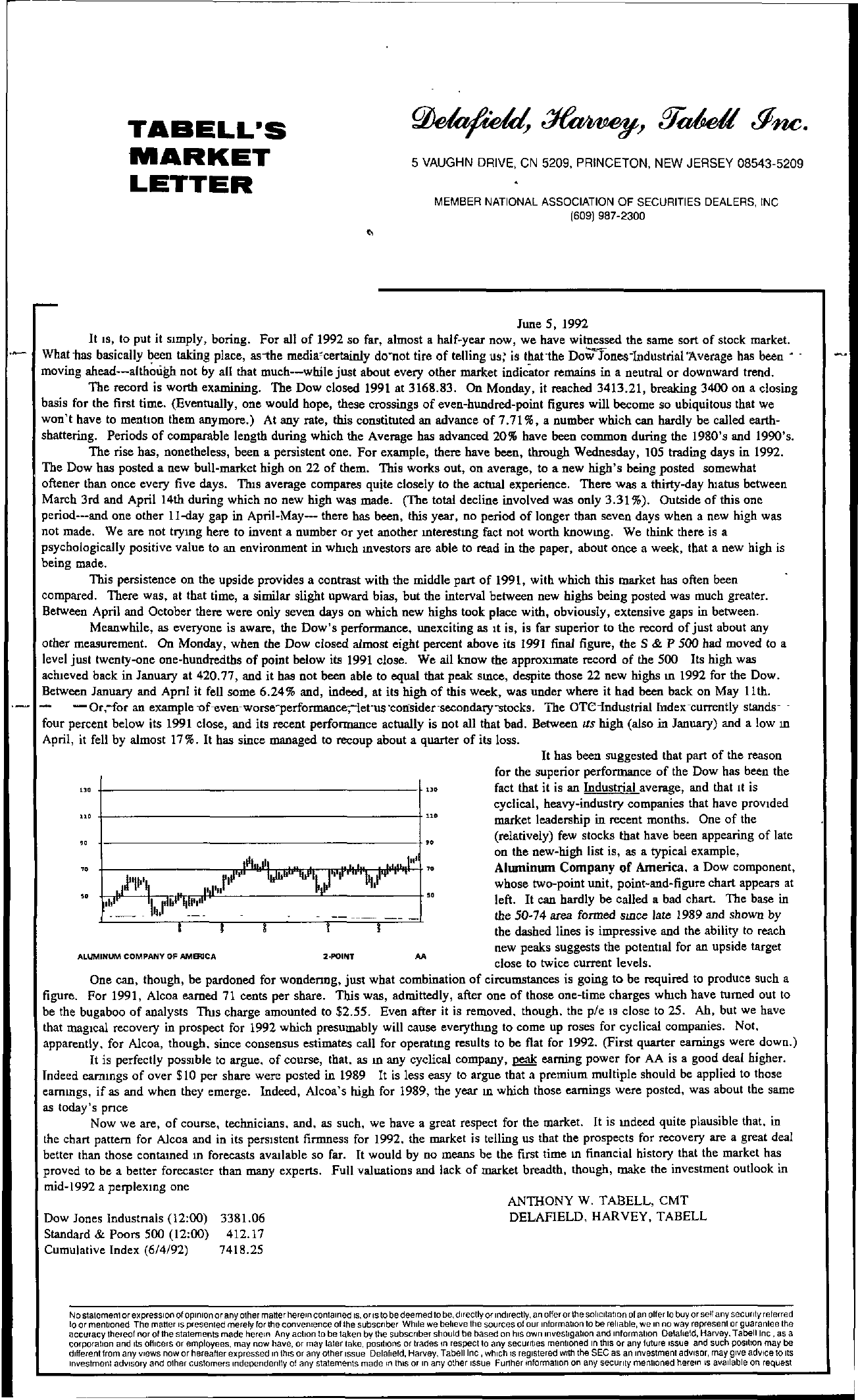 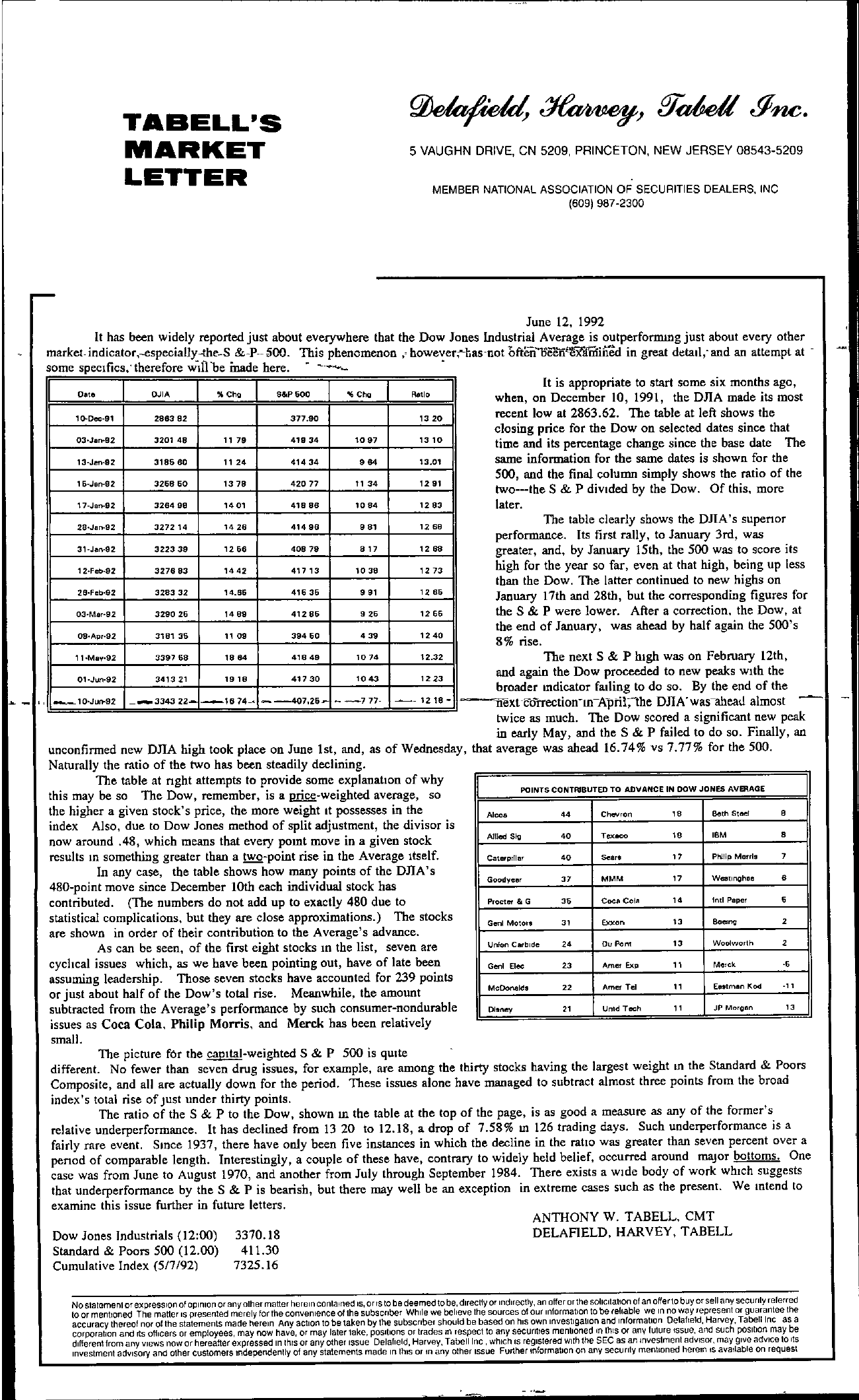 TABELL'S MARKET LETTER 5 VAUGHN DRIVE, CN 5209, PRINCETON. NEW JERSEY 08543-5209 MEMBER NATIONAL ASSOCIATION OF SECURITIES DEALERS. INC (609) 9872300 June 12. 1992 It has been widely reported just about everywhere that the Dow Jones Industrial Average is outperfonrung just about every other market-indicator,especiallheS &P- 500. This phenomenon ,0 howerer.;-has-not oftertbeeri'-e'Xaninied in great detall,Land an attempt at – some specrfics.' therefore wIlI'be made here —- I Date I OJI. I I I I I eng S8tP600 fIE, Chg Retlo It is appropriate to start some six months ago. When, on December 10, 1991, the DnA made its most lG-Occ-91 03Jan-92 2863 82 320148 11 79 377.90 41934 1097 1320 1310 recent low at 2863.62. The table at left shows the closing price for the Dow on selected dates since that time and its percentage change since the base date The 13-Jen-92 , 6-J8n-92 318660 326860 11 24 1378 41434 42077 984 11 34 1l.01 1291 same information for the same dates is shown for the S00, and the final column simply shows the ratio of the two–the S & P diVided by the Dow. Of this. more 17-J8n-92 28J8n-92 326498 3272 14 1401 1428 41886 41498 1084 98' 1283 1268 later. The table clearly shows the DnA's supenor performance. Its first rally, to January 3rd, was 31-Jfl1'I-92 322339 1256 40879 8 88 greater, and. by January ISth. the SOO was to score its 12-Feb-92 28-Feb-92 03-Mar-92 08-Apr-92 l1-Ma'f-92 327683 328332 329026 3181 36 339768 1442 1486 1499 1109 1864 41713 41636 41286 39460 41849 1038 99' 926 43. 1074 1273 1266 1266 1240 12.32 high for the year so far, even at that high, being up less than the Dow. The latter continued to new highs on January 17th and 28th, but the corresponding figures for the S & P were lower. After a correction. the Dow, at the end of January, was ahead by half again the 500's 8 rise. The next S & P high was on February 12th, 01-Jun-92 1O-Jun-92 341321 1918 -334322.- 1674. 41730 407,21),. '043 777- 1223 1218 and again the Dow proceeded to new peaks With the braader mdicator fading to do so. By the end of the -next correction-m-Aptil;-the DnA' was-ahead almost twice as much. The Dow scored a significant new peak in early May, and the S & P failed to do so. Finally, an unconfirmed new DnA high took place on June 1st, and, as of Wednesday, that average was ahead 16.74 vs 7.77 for the 500. Naturally the ratio of the two has been steadily declining. The table at nght attempts to provide some explanalton of why this may be so The Dow, remember, is a price-weighted average, so POINT6 CONTRIBUTED TO ADVANCE tN DOW JONES AVERAGE the higher a given stock's price, the more weight It possesses in the index Also, due to Dow Jones method of split adjustment, the divisor is now around .48, which means that every pomt move in a given stock results 1fl something greater than a two-point rise in the Average ltself. In any case, the table shows how many points of the DnA's 480-point move since December 10th each individual stock has contributed. (The numbers do not add up to exactly 480 due to Alcoa 44 Chevron Allied Si1l Caterpillar …..40 Texaco 40 Goodyellr 37 MMM Procter &. G 3' COClI Cola '8 Beth SleeI 8 '8 IBM 8 17 Philip Morris 7 17 Westlnghee 8 '4 Inti Paper , statistical complications, but they are close approximations) The stocks are shown in order of their contribution to the Average's advance. As can be seen, of the first eight stocks In the list, seven are cyclical issues which, as we have been pointing out, have of late been assuming leadership. Those seven stocks have accounted for 239 points or just about half of the Dow's total rise. Meanwhile, the amount Gent MOlars Union Carbide Genl Elec McDonalds 3' 24 23 22 'on Ou Pont Arner Exp Arne! Tel '3 Bo…. 2 13 Woolworth 2 Me.ek ., .EMtman Koct subtracted from the Average's performance by such consumer-nondurable issues as Coca Cola. Philip Morris. and Merck has been relatively Disney Untd Tech JP Morglln '3 smalJ. The picture for the capital-weighted S & P 500 is qUite different No fewer than seven drug issues, for example, are among the thirty stocks having the largest weight an the Standard & Poors Composite, and all are actually down for the period. These issues alone have managed to subtract almost three points from the broad index's total rise of Just under thirty points. The ratio of the S & P to the Dow, shown ill the table at the top of the page, is as good a measure as any of the former's relative underperformance. It has declined from 13 20 to 12.18, a drop of 7.S8 m 126 trading days. Such underperformance is a fairly rare event. Since 1937, there have only been five instances in which the decline in the ralto was greater than seven percent over a penod of comparable length. Interestingly, a couple of these have, contrary to widely held belief, occurred around major bottoms. One case was from June to August 1970, and another from July through September 1984. There exists a Wide body of work which suggests that underperfonnance by the S & P is bearish, but there may well be an exception in extreme cases such as the present. We Intend to examine this issue further in future letters. ANTIIONY W. TABELL. CMT Dow Jones Industrials (1200) 3370.18 DELAAELD,HARVEY,TABELL Standard & Poors SOO (12.00) 411.30 Cumulative Index (517/92) 7325.16 No slalamenl or expression of opInion or any other matter herein contained IS, or IS to be deemed to be. dlrectty Of indirectly, an offer or the soliCitation of an offerlo buy or sell any security referred to or mentioned The matter IS presented merely for the convenience of the subscnber While we beheve the sources 01 our information to be rehable we In no way represent or guarantee the accuracy thereof nor of the statements made herein Any action to be taken by the subscriber should be based on hiS own Investigation and Informallon Delafield. Harvey, Tabell Inc as a corporation and lis officers or employees, may now have, or may later lake, pOSllions or trades In respect to any seCUrities mentioned In thiS or any fu1Ure ISSUe, and such pOSItion may be different from any views nowor hereafter expressed In thiS or any other Issue Delafield, Harvey, Tabell Inc. which IS registered With the SEC as an Investment adVisor, may give adVice to ItS Investment adVISOry and other customers Independently of any statements made In thiS or In any other Issue Further InformatIOn on any securrty menlloned herein IS avallabte on request 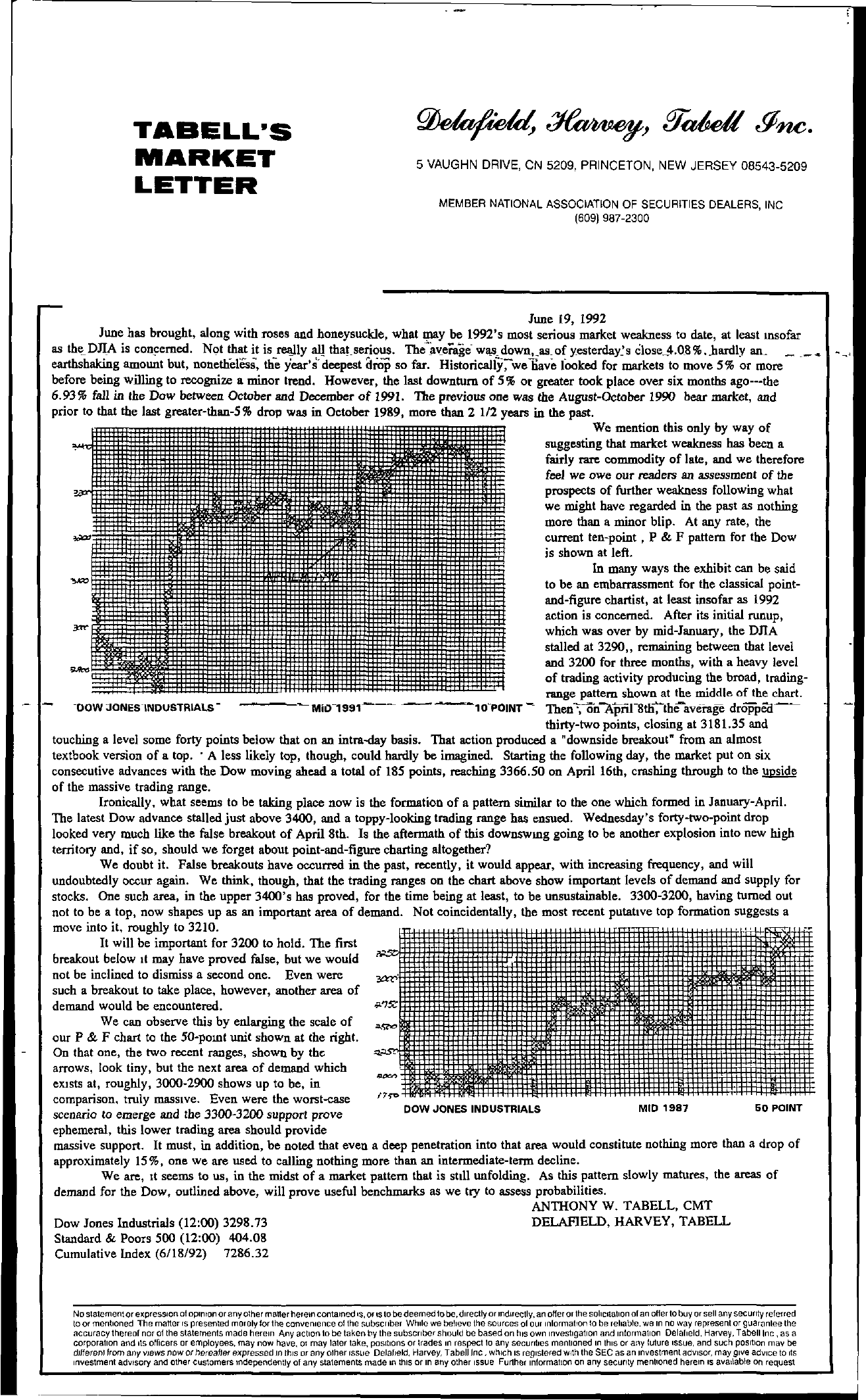 TABELL'S MARKET LETTER 5 VAUGHN DRIVE, CN 5209, PRINCETON, NEW JERSEY 08543-5209 MEMBER NATIONAL ASSOCIATION OF SECURITIES DEALERS, INC (6091987-2300 June 19, 1992 June has brought, along with roses and boneysuckle, what may be 1992's most serious market weakness to date, at least msofar as theDJIA is conpemed. Not that it is Iy aJj that. serious. The-'a..erage wasdown,asof ,esterdaycs CIose4.08 ..hardly an 4 earthshaking amount but, nonethelesS, the Year- deepest drop so far. Historicaliy;-weIlave looked for markets to move 5 or more before being willing to recognize a minor trend. However, the last downturn of 5 or greater took place over six months ago—the 6.93 fall in the Dow between October and Deeember of 1991. The previous one was the August-October 1990 bear market, and prior to that the last greater-than-5 drop was in October 1989, more than 2 112 years in the past. We mention this only by way of suggesting that market weakness has been a fairly rare commodity of late, and we therefore feeJ we owe our readers an assessment of the prospects of further weakness following what we might have regarded in the past as nothing more than a minor blip. At any rate, the current ten-point , P & F pattern for the Dow is shown at left. In many ways the exhibit can be said to be an embarrassment for the classical point- and-figure chartist, at least insofar as 1992 action is concerned. After its initial runup, which was over by mid-Januaty, the DnA stalled at 3290 remaining between that level and 3200 for three months, with a heavy level -DOW JONES-INDUSTRIALS – of trading activity producing the broad, tradingrange pattern shown at the middle of the chart. thirty-two points, closing at 3181.35 and touching a level some forty points below that on an intra-day basis. That action produced a downside breakout from an almost textbook version of a top. . A less likely top, though, could hardly be imagined. Starting the following day, the market put on six consecutive advances with the Dow moving ahead a total of 185 points, reaching 3366.50 on April 16th, crashing through to the upside of the massive trading range. Ironically, what seems to be taking place now is the formation of a pattern similar to the one which formed in Januaty-April. The latest Dow advance stalled just above 3400, and a toppy-looking trading range has ensued. Wednesday's forty-two-point drop looked very much like the false breakout of April 8th. Is the aftermath of this downswmg going to be another explosion into new high territory and, if so, should we forget about point-and-figure charting altogether We doubt it. False breakouts have occurred in the past, recently, it would appear, with increasing frequency, and will undoubtedly occur again. We think, though, that the trading ranges on the chart above show important levels of denumd and supply for stocks. One such area, in the upper 34OO's has proved, for the time being at least, to be unsustainable. 3300-3200, having turned out not to be a top, now shapes up as an important area of demand. Not coincidentally, the most recent putattve top formation suggests a move into it, roughly to 3210. It will be important for 3200 to hold. The first breakout below It may have proved false, but we would not be inclined to dismiss a second one. Even were such a breakout to take place, however, another area of demand would be encountered. We can observe this by enlarging the scale of our P & F chart to the 50-pomt unit shown at the right. On that one, the two recent ranges, shown by the arroWS, look tiny t but the next area of demand which eXlsts at, roughly, 3000-2900 shows up to be, in comparison. truly masSIve. Even Were the worst-case scenario to emerge and the 3300-3200 support prove ,, DOW JONES INDUSTRIALS MID 1987 50 POINT ephemeral, this lower trading area should provide massive support. It must, in addition, be DOted that even a deep penetration into that area would constitute nothing more than a drop of approximately 15, one we are used to calling nothing more than an intermediate-term decline. We are, It seems to us, in the midst of a market pattern that is stIll unfolding. As this pattern slowly matures, the areas of demand for the Dow, outlined above, will prove useful benchmarks as we try to assess probabilities. AN1HONYW. TABELL, CMT Dow Jones Industrials (1200) 3298.73 DELD,HARVEY,TABELL Standard & Poors 500 (1200) 404.08 Cumulative Index (6/18/92) 7286.32 No statement or expression of oplnton or any other matter herein contained IS, or IS to be deemed to be,dlrectly or Indirectly, an offer or the solicitation of an offer to buy or sell any secunty referred to or mentioned The matter IS presented merely for the convenience of the subscriber Whllo we believe the sources of our information to be reliable, we In no way represent or guarantee the accuracy thereof nor of the statements made herein Any acllon to be taken by the subSCriber should be based on hiS own investigatIOn and information Delafield, Harvey, Tabellinc , as a corporation and lIs officers or employees, may now have, 01 may later take, poSitions or trades In respect 10 any secunbes menlloned In thiS or any future Issue, and such POSition may be dlfferen! from any views now Of hereafter expressed m !hJS or any o!her Issue OeJafJeJd, Harvey, TabeJJ Jnc, which IS registered With the SEC as an Investment adVisor, may give adVice to lIs Investment adVISOry and other customers Independently of any statements made In thiS or In any other Issue Further Informal!on on any security mentioned herein IS available on request 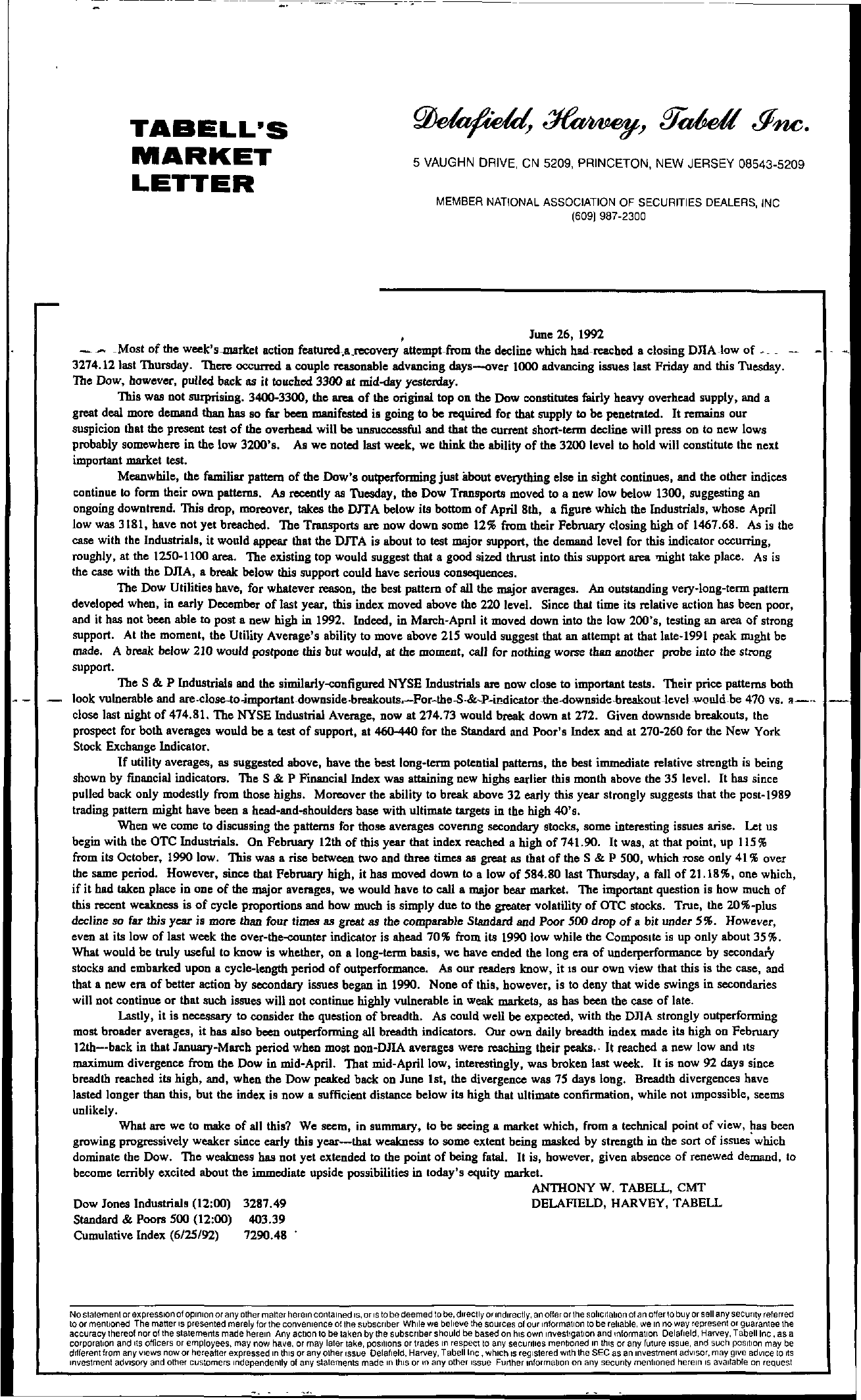