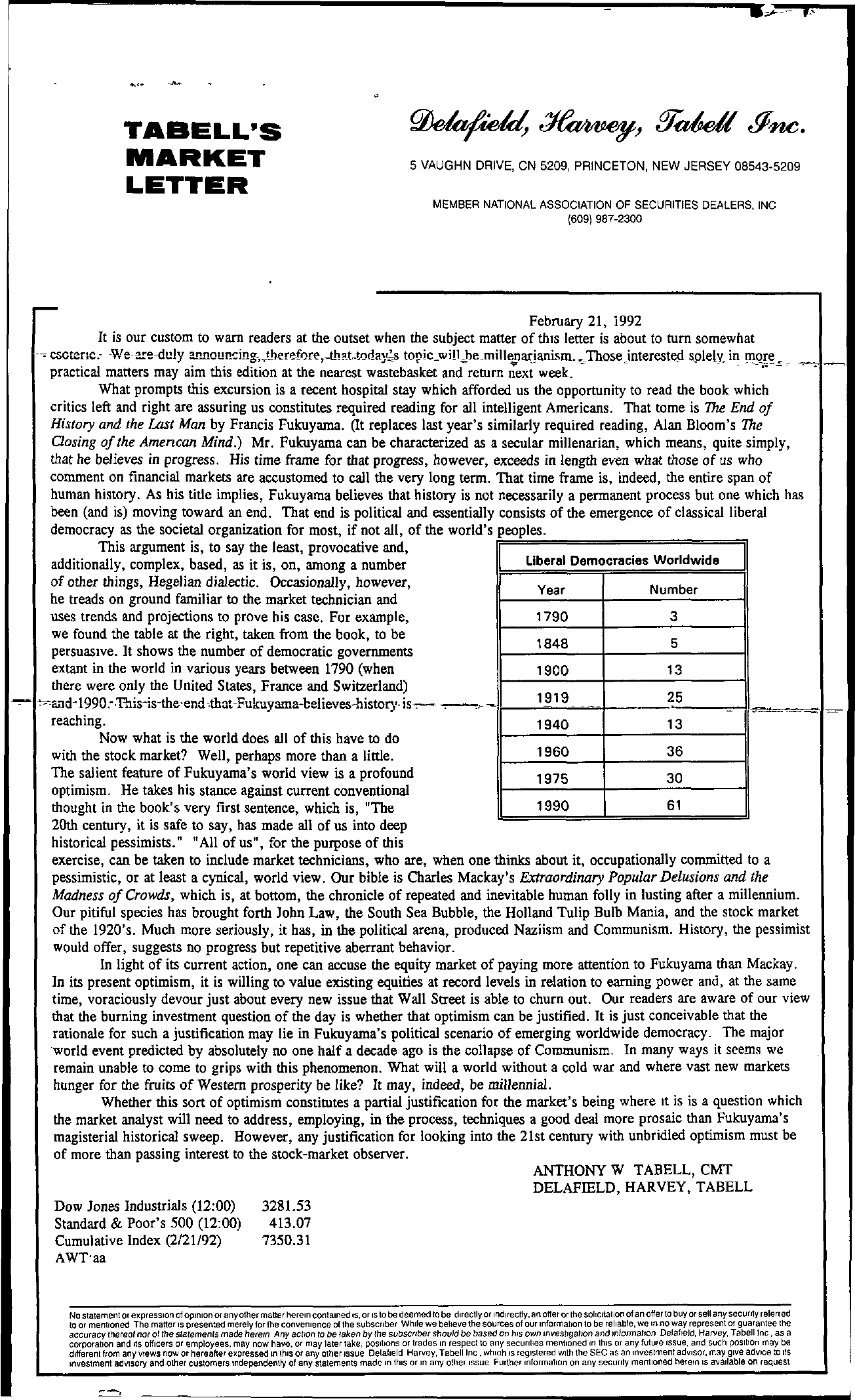 TABELL'S MARKET LETTER 5 VAUGHN DRIVE, CN 5209, PRINCETON, NEW JERSEY OB5435209 MEMBER NATIONAL ASSOCIATION OF SECURITIES DEALERS, INC (609) 9872300 February 21, 1992 It is our custom to warn readers at the outset when the subject matter of thIS letter is about to turn somewhat —– csctenc.- ,V/e-are-duly a!..nouI!.ing-.-.-therefore,thttoday topicwill.;;,.bemil1t;tlrujanism. Those jntereste!i splely in 9! .. .- practical matters may aim this edition at the nearest wastebasket and return next week. . – . What prompts this excursion is a recent hospital stay which afforded us the opportunity to read the book which critics left and right are assuring us constitutes required reading for all intelligent Americans. That tome is The End of History and the lAst Man by Francis Fukuyama. (It replaces last year's similarly required reading, Alan Bloom's The Qosing of the Amencan Mind.) Mr. Fukuyama can be characterized as a secular millenarian, which means, quite simply, that he believes in progress. His time frame for that progress, however, exceeds in length even what those of us who comment on financial markets are accustomed to call the very long term. That time frame is, indeed, the entire span of human history. As his title implies, Fukuyama believes that history is not necessarily a permanent process but one which has been (and is) moving toward an end. That end is political and essentially consists of the emergence of classical liberal democracy as the societal organization for most, if not all, of the world's peoples. This argument is, to say the least, provocative and, rrl911 additionally, complex, based, as it is, on, among a number liberal Democracies Worldwide of other things, Hegelian dialectic. Occasionally, however, he treads on ground familiar to the market technician and Year Number uses trends and projections to prove his case. For example, 1790 3 we found the table at the right, taken from the book, to be persuasIve. It shows the number of democratic governments 1848 5 extant in the world in various years between 1790 (when 1900 13 there were only the United States, France and Switzerland) Oa;)d 1990This1s-the'end.that-FuJc.yamabelieves-history is-.- .1f-…1-'9…1.. ..9….,f-.2,-'5—lI''I' reaching. Now what is the world does all of this have to do with the stock market Well, perhaps more than a little. 1940 1960 13 36 The salient feature of Fukuyama's world view is a profound optimism. He takes his stance against current conventional thought in the book's very first sentence, which is, The 1975 1990 30 61 20th century, it is safe to say, has made all of us into deep historical pessimists. All of us, for the purpose of this exercise, can be taken to include market technicians, who are, when one thinks about it, occupationally committed to a pessimistic, or at least a cynical, world view. Our bible is Charles Mackay's Extraordinary Popular Delusions and the Madness of Crowds, which is, at bottom, the chronicle of repeated and inevitable human folly in lusting after a millennium. Our pitiful species has brought forth John Law, the South Sea Bubble, the Holland Tulip Bulb Mania, and the stock market of the 1920's. Much more seriously, it has, in the political arena, produced Naziism and Communism. History, the pessimist would offer, suggests no progress but repetitive aberrant behavior. In light of its current action, one can accuse the equity market of paying more attention to Fukuyama than Mackay. In its present optimism, it is willing to value existing equities at record levels in relation to earning power and, at the same time, voraciously devour just about every new issue that Wall Street is able to churn out. Our readers are aware of our view that the burning investment question of the day is whether that optimism can be justified. It is just conceivable that the rationale for such a justification may lie in Fukuyama's political scenario of emerging worldwide democracy. The major 'world event predicted by absolutely no one half a decade ago is the collapse of Communism. In many ways it seems we remain unable to come to grips with this phenomenon. What will a world without a cold war and where vast new markets hunger for the fruits of Western prosperity be like It may, indeed, be millennial. Whether this sort of optimism constitutes a partial justification for the market's being where It is is a question which the market analyst will need to address, employing, in the process, techniques a good deal more prosaic than Fukuyama's magisterial historical sweep. However, any justification for looking into the 21st century with unbridled optimism must be of more than passing interest to the stockmarket observer. ANTHONY W TABELL, CMT DELAFffiLD,HARVEY,TABELL Dow Jones Industrials (1200) 3281.53 Standard & Poor's 500 (1200) 413.07 Cumulative Index (2/21/92) 7350.31 AWT'aa No statement or expression of opinion or any other matter herein contained is, or is to be deemed to be, directly or indirectly, an offer or the solicitation of an offer to buy or sell any security referred to or mentioned. The matter is presented merely for the convenience of the subscriber. While we believe the sources of our information to be reliable, we in no way represent or guarantee the accuracy thereof nor of the statements made herein. Any action to be taken by the subscriber should be based on his own investigation and information. Delafield, Harvey, Tabell Inc. as a corporation and its officers or employees, may now have, or may later take, positions or trades in respect to any securities mentioned in this or any future issue, and such position may be different from any views now or hereafter expressed in this or any other issue. Delafield, Harvey, Tabell Inc., which is registered with the SEC as an investment advisor, may give advice to its investment advisory and other customers independently of any statements made in this or in any other issue. Further information on any security mentioned herein is available on request.