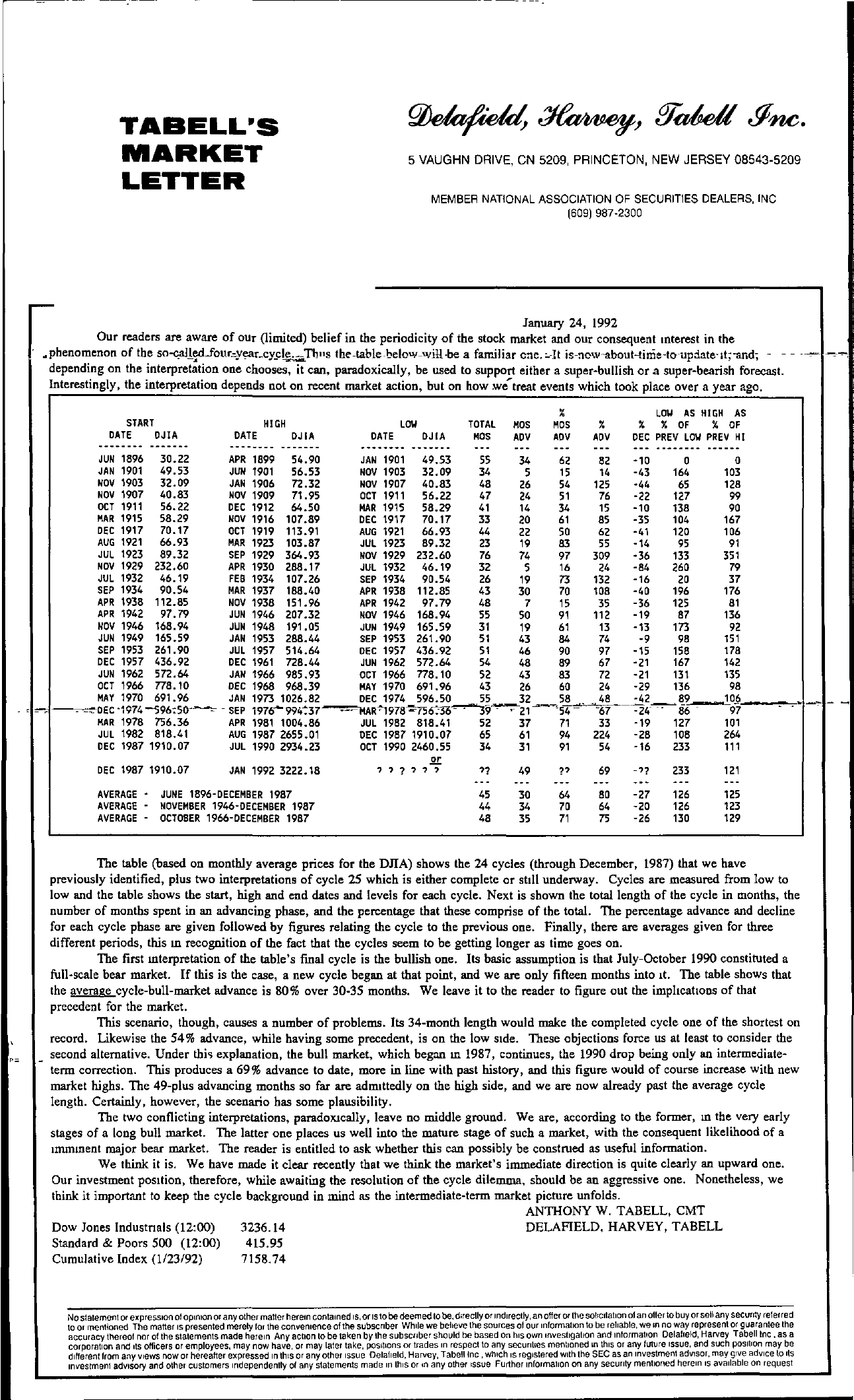 TABELL'S MARKET LETTER 5 VAUGHN DRIVE, eN 5209, PRINCETON, NEW JERSEY 085435209 MEMBER NATIONAL ASSOCIATION OF SECURITIES DEALERS, INC (609) 9872300 January 24, 1992 Our readers are aware of our (limited) belief in the periodicity of the stock market and our consequent interest in the phenomenon of the so-called four-year cycle. Thus the table below will be a familiar one. It is now about time to update it, and, depending on the interpretation one chooses, it can, paradoxically, be used to support either a super-bullish or a super-bearish forecast. Interestingly, the interpretation depends not on recent market action, but on how we treat events which took place over a year ago. The table (based on monthly average prices for the DJIA shows the 24 cycles (through December, 1987) that we have previously identified, plus two interpretations of cycle 25 which is either complete or still underway. Cycles are measured from low to low and the table shows the start, high and end dates and levels for each cycle. Next is shown the total length of the cycle in months, the number of months spent in an advancing phase, and the percentage that these comprise of the total. The percentage advance and decline for each cycle phase are given followed by figures relating the cycle to the previous one. Finally, there are averages given for three different periods, this In recognition of the fact that the cycles seem to be getting longer as time goes on. The first Interpretation of the table's final cycle is the bullish one. Its basic assumption is that July-October 1990 constituted a full-scale bear market. If this is the case, a new cycle began at that point, and we are only fifteen months into It. The table shows that the average cycle-bullmarket advance is 80 over 30-35 months. We leave it to the reader to figure out the implications of that precedent for the market. This scenario, though, causes a number of problems. Its 34-month length would make the completed cycle one of the shortest on record. Likewise the 54 advance, while baving some precedent. is on the low Side. These objections force us at least to consider the second alternative. Under thi'i explanation. the bull market. which began. m 1987, continues, the 1990 drop being only an intermediate term correction. This produces a 69 advance to date, more in line with past history, and this figure would of course increase with new market highs. The 49plus advancing months so far are admittedly on the high side, and we are now already past the average cycle length. Certainly, however, the scenario has some plausibility. The two conflicting interpretations. paradoxically, leave no middle ground. We are, according to the former, m the very early stages of a long bull market. The latter one places us well into the mature stage of such a market. with the consequent likelihood of a imminent major bear market. The reader is entitled. to ask whether this can possibly be construed as useful information. We think it is, We have made it clear recently that we think the market's immediate direction is quite clearly an upward one. Our investment position, therefore, while awaiting the resolution of the cycle dilemma. should be an aggressive one. Nonetheless, we think it important to keep the cycle background in mind as the intermediate-term market picture unfolds. ANTHONY W. TABELL, CMT Dow Jones Industrials (1200) 3236.14 DELAAELD,HARVEY,TABELL Standard & Poors 500 (1200) 415.95 Cumulative Index (1123/92) 7158.74 No statement or expression of opinion or any other matter herein contained is, or is to be deemed to be, directly or indirectly, an offer or the solicitation of an offer to buy or sell any security referred to or mentioned. The matter is presented merely for the convenience of the subscriber. While we believe the sources of our information to be reliable, we in no way represent or guarantee the accuracy thereof nor of the statements made herein. Any action to be taken by the subscriber should be based on his own investigation and information. Delafield, Harvey, Tabell Inc. as a corporation and its officers or employees, may now have, or may later take, positions or trades in respect to any securities mentioned in this or any future issue, and such position may be different from any views now or hereafter expressed in this or any other issue. Delafield, Harvey, Tabell Inc., which is registered with the SEC as an investment advisor, may give advice to its investment advisory and other customers independently of any statements made in this or in any other issue. Further information on any security mentioned herein is available on request.