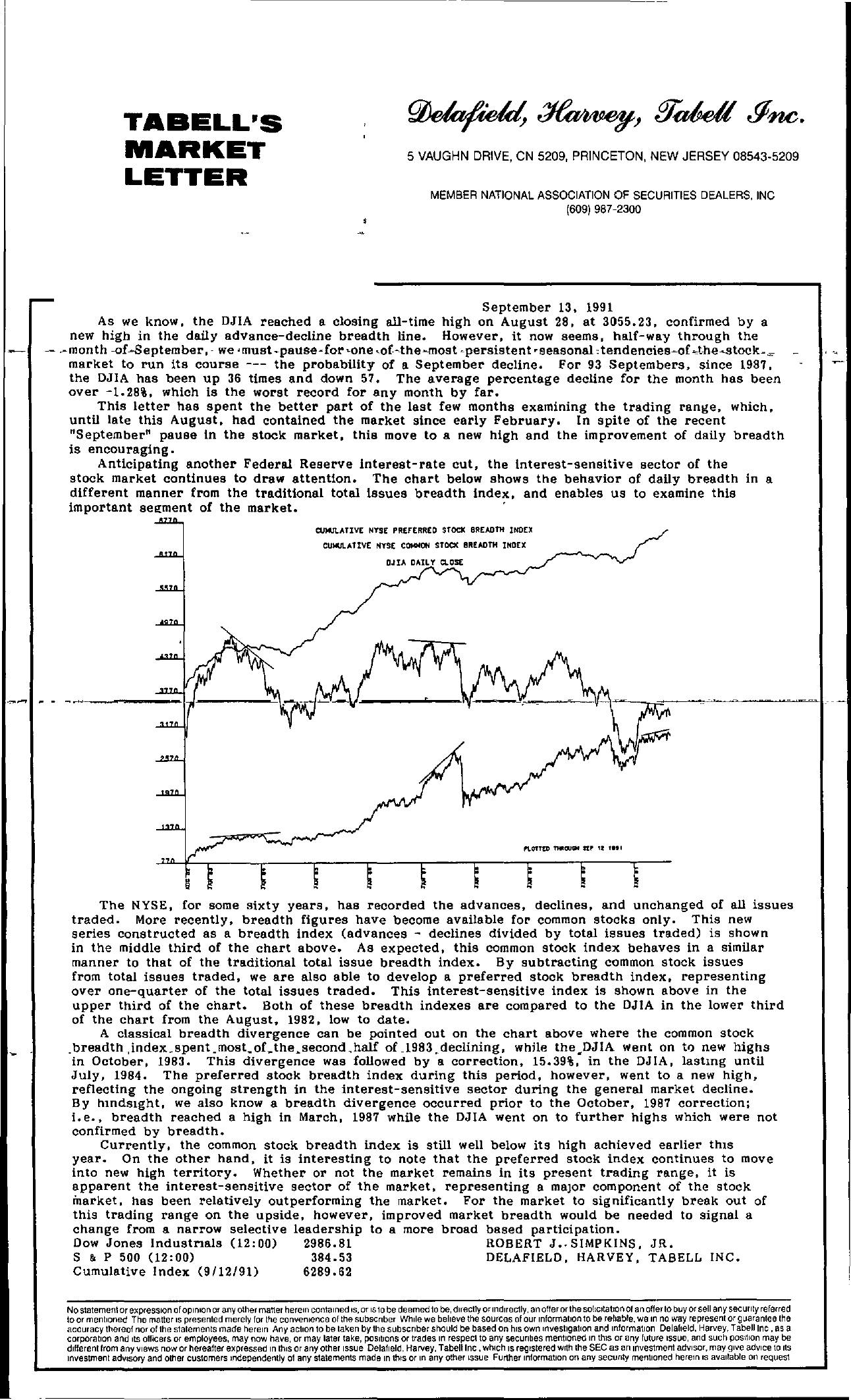 r i TABELL'S MARKET LETTER 5 VAUGHN DRIVE, CN 5209, PRINCETON, NEW JERSEY 08543-5209 MEMBER NATIONAL ASSOCIATION OF SECURITIES DEALERS, INC (609) 987-2300 September 13. 1991 As we know. the DJIA reached a closing ail-time high on August 28. at 3055.23. confirmed by a new high in the daily advance-decline breadth line. However. It now seems. half-way through the month -of-September. we must.pause-for-one ,ofAhemost -persistent seasonal.tendencies–of .t.h!stock market to run its course — the probability of a September decline. For 93 Septembers, since 1987, the DJIA has been up 36 times and down 57. The average percentage decline for the month has been over -1.28, which is the worst record for any month by far, This letter has spent the better part of the last few montha examining the trading range, which, until late this August. had contained the market since early February, In spite of the recent September pause In the stock market, thia move to a new high and the improvement of daily breadth is encouraglng Anticipating another Federal Reserve Interest-rate cut, the Interest-sensitive sector of the stock market continues to draw attention. The chart below shows the behavior of daily breadth in a different manner from the traditional total Issues breadth Index, and enables us to examine this Important seEment of the market. CUMJt.ATIVE NYS PRff'ERRED STOCK BREADTH IKDEX CUIILATIVE NYS( COMMOH SToex BREADTH INDEX OJlA CAllY Clost – – – – – – – – – h l – – – \ ; The NYSE, for some Sixty years. has recorded the advances. declines, and unchanged of all issues traded. More recently, breadth figures have become available for common stocks only, This new series constructed as a breadth index (advances – declines divided by total issues traded) is shown in the middle third of the chart above. As expected, this common stock index behaves in a similar manner to that of the traditional total issue breadth index. By subtracting common stock issues from total issues traded, we are also able to develop a preferred stock breadth index. representing over one-quarter of the total issues traded. This interest-sensitive index is shown above in the upper third of the chart. Both of these breadth indexes are compared to the DJIA in the lower third of the chart from the August, 1982. low to date. A classical breadth divergence can be pointed out on the chart above where the common stock ,breadth ,indexspentmost.oCthe.secondhalf of 1983declining, while the.DJIA went on to new highs in October. 1983. This divergence was followed by a correction, 15.39. in the DJIA. lastmg until July, 1984. The preferred stock breadth index during this period, however, went to a new high, reflecting the ongoing strength in the interest-sensitive sector during the general market decline. By hIndSIght, we also know a breadth divergence occurred prior to the October, 1987 correction; i.e. breadth reached a high in March. 1987 while the DJIA went on to further highs which were not confirmed by breadth. Currently, the common stock breadth index is still well below its high achieved earlier thIS year. On the other hand. it is interesting to note that the preferred stock index continues to move into new high territory. Whether or not the market remains in its present trading range. it is apparent the interest-sensitive sector of the market. representing a major component of the stock inarket, has been relatively outperforming the market. For the market to significantly break out of this trading range on the upside, however, improved market breadth would be needed to signal a change from a narrow selective leadership to a more broad based participation. Dow Jones IndustMals (1200) 2986.81 ROBERT J . SIMPKINS, JR. S & P 500 (1200) 38453 DELAFIELD, HARVEY. TABELL INC. Cumulative Index (9/12/91) 6289.62 No statement or expression of opinion or any other matter herein contained IS, or IS 10 be deemedl0 be, directly or Indirectly. an offer orthe so\tcltatlOn of an offer to buy or sell any security referred to or mentioned The matter IS presented merely for the convenience of the subscriber While we beheve the sources of our Information to be reliable, we In no way represent or guarantee the accuracy thereof nor of the statements made herein Any action to be taken by the subscriber should be based on hiS own Investlgallon and InformatIOn Delafield, Harvey, Tabellinc ,as a corporation and Its officers or employees, may now have, or may later take, posItions or trades 11'1 respect to any securilies mentIOned In thiS or any future Issue, and such pOSition may be different from any views now or hereafter expressed In thiS or any other Issue Delafield, Harvey, Tabelllnc, which IS registered wrth the SEC as an Investment advisor, may give adVice to rts Investment adVISOry and other customers Independently of any statements made In thiS or In any erther ISsue Further InformatIOn on any security menlloned herein IS avallabte on request