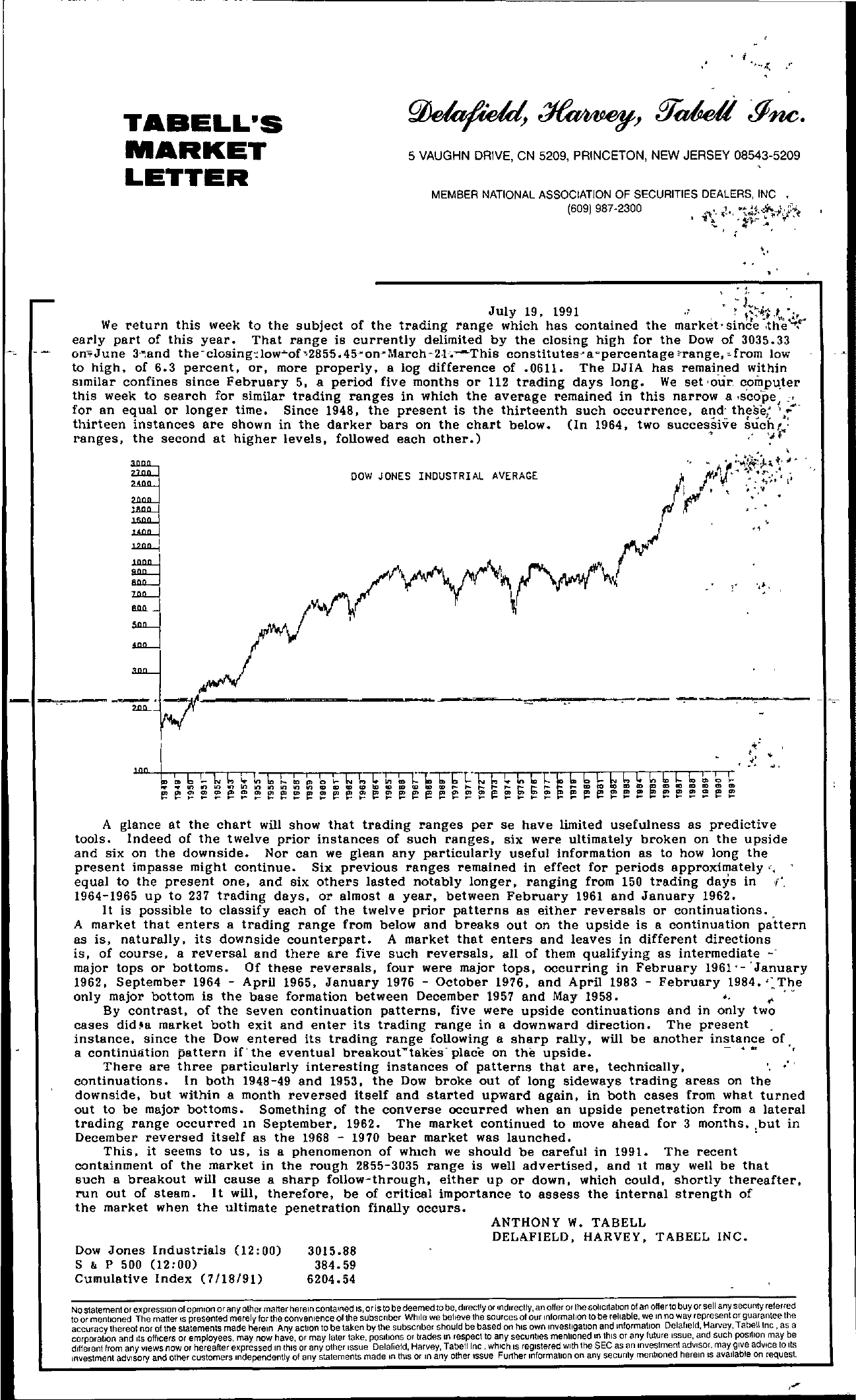 TABELL-S MARKET LETTER 5 VAUGHN DRIVE, CN 5209, PRINCETON, NEW JERSEY 08543-5209 MEMBER NATIONAL ASSOCIATION OF SECURITIES DEALERS, INC (609) 9872300 ,'nf' t' i'f';;;t . – , ' '.' J uly 19. 1991 -, – L. – ,; , f'''1 ,'. . ., , We return this week to the subject of the trading range which has contained the market-sinde ,the…… early part of this year, That range is currently delimited by the closing high for the Dow of 3035.33 on'rJune 3-;and the -closing-low'of'2855. 45-on- March-2-1.—This constitutes-a percentage -range, c. from low to high, of 6.3 percent. or. more properly. a log difference of .0611. The DJIA has remained within SImilar confines since February 5. a period five months or 112 trading days long. We set 'our, cpinpu.ter this week to search for similar trading ranges in which the average remained in this narrow a ,Scope ,. for an equal or longer time. Since 1948, the present is the thirteenth such occurrence, and- these. ff … – suc'h ,thirteen instances are shown in the darker bars on the chart below. (In 1964, two successive ranges. the second at higher levels. followed each other.) , .. 'J/ DOW JONES INDUSTRIAL AVERAGE , 6Sk kb6 kb-6 bb- E-r-r-r-r-r'-'-r-r-r-r E e eeeeee eeeeee ee e eee A glance at the chart will show that trading ranges per se have limited usefulness as predictive tools. Indeed of the twelve prior instances of such ranges. six were ultimately broken on the upside and six on the downside. Nor can we glean any particularly useful information as to how long the present impasse might continue. Six previous ranges remained in effect for periods approximately.,. equal to the present one. and six others lasted notably longer. ranging from 150 trading days in of', 1964-1965 up to 237 trading days. or almost a year, between February 1961 and January 1962. It is possible to classify each of the twelve prior patterns as either reversals or continuations. A market that enters a trading range from below and breaks out on the upside is a continuation pa'ttern as is. naturally. its downside counterpart. A market that enters and leaves in different directions is, of course, a reversal and there are five such reversals t all of them qualifying as intermediate -major tops or bottoms. Of these reversals, four were major tops, oocurring in February 1961'- 'January 1962. September 1964 – April 1965. January 1976 – October 1976. and April 1983 – February 1984. ' The only major bottom is the base formation between December 1957 and May 1958. . .. By contrast, of the Seven continuation patterns, five were upside continuations and in only two cases did a market both exit and enter its trading range in a downward direction. The present . instance. since the Dow entered its trading range following a sharp rally, will be another instance of a continuation pattern if'the eventual breakout''''takes- place on the upside. – 4' There are three particularly interesting instances of patterns that are, technically. /' continuations. In both 1948-49 and 1953. the Dow broke out of long sideways trading areas on the downside. but within a month reversed itself and started upward again. in both cases from what turned out to be major bottoms. Something of the converse occurred when an upside penetration from a lateral trading range occurred In September, 1962. The market continued to move ahead for 3 months. ,but in December reversed itself as the 1968 – 1970 bear market was launched. . This. it seems to us, is a phenomenon of which we should be careful in 1991. The recent containment of the market in the rough 2855-3035 range is well advertised. and It may well be that such a breakout will caUSe a sharp follow-through. either up or down, which could. shortly thereafter, run out of steam. It will, therefore, be of critical importance to assess the internal strength of the market when the Ultimate penetration finally occurs. ANTHONY W. TABELL DELAFIELD. HARVEY, TABECL INC. Dow Jones Industrials (12 00) 3015.88 S & P 500 (1200) 384.59 Cumulative Index (7/18/91) 6204.54 No statement or expression of oplmon or any other maner herein contained IS, or Is to be deemed to be, drrectly or Indirectly, an offer or the solicltalion of an offer to buy or sell any secunty referred to or mentioned The matter IS presented merely for the convemence 01 the subSCriber While we beheve the sources of our Informalion to be reliable, we In no way represent or guarantee the accuracy thereof nor of the statements made herein Any aclron to be taken by the subscrrber should be based on hiS own mvestlgatlon and Information Delafield, Harvey, Tabell Inc, as a corporation and lis offICers or employees, may now have, or may later take, poSItrons or trades In respect to any secuntles mentioned In thiS or any Mure Issue, and such posilion may be different from any views now or hereafter expressed In thiS or any other Issue Delafield, Harvey, Tabetllnc, which IS registered With the SEC as an Investment adVisor, may give advice to Its Investment adVISOry and other customers Independently of any statements made In thiS or In any other Issue Further Information on any securlly mentioned herein IS available on request