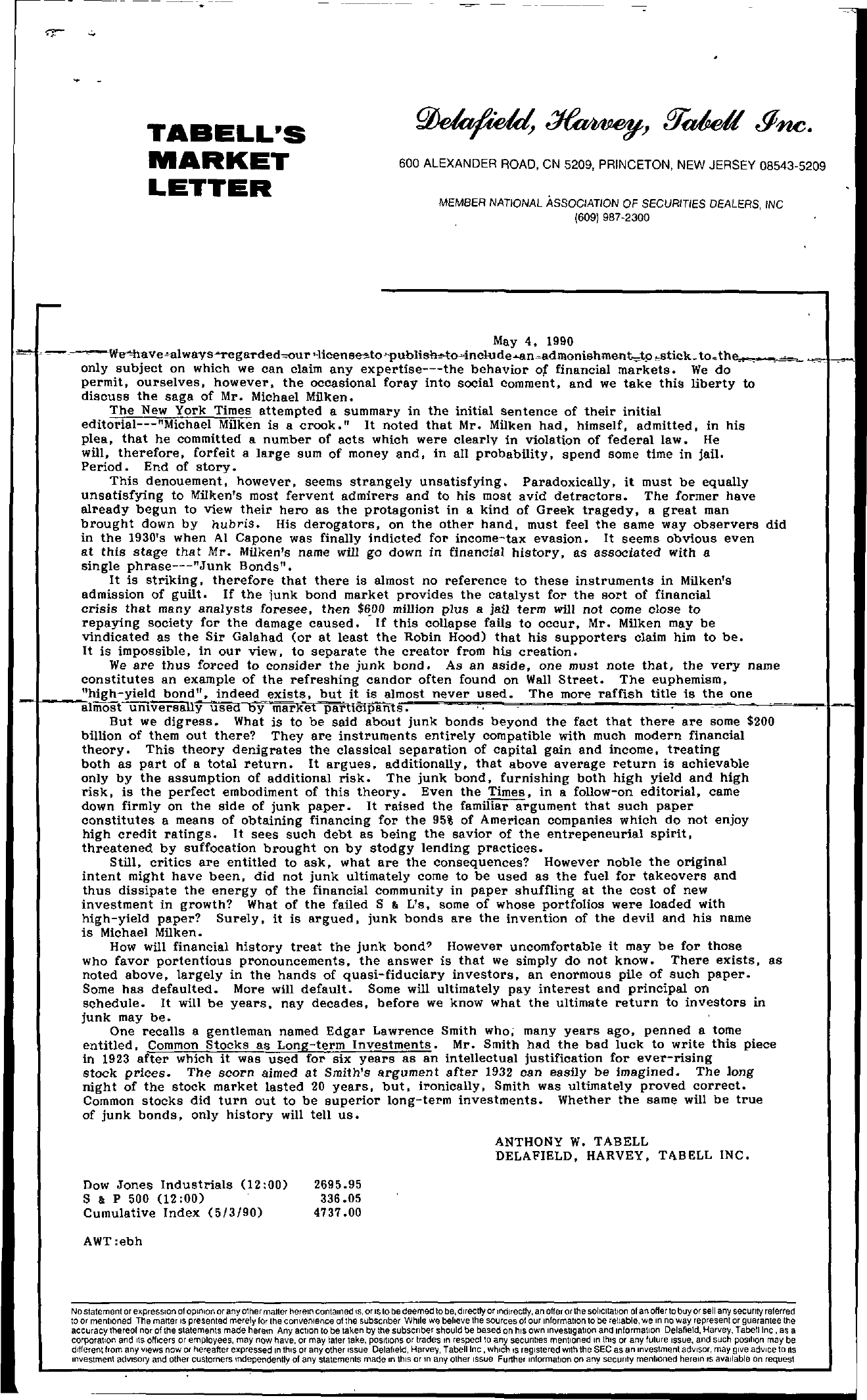 , – – – – – — TABELL'S MARKET LETTER 600 ALEXANDER ROAD, CN 5209, PRINCETON, NEW JERSEY 08543-5209 MEMBER NAT/ONAl ASSOCIATION OF SECURITIES DEALERS, INC (609) 987-2300 May 4. 1990 …. —–'-Wehave'alwaysgatdedour 'licenseto -publish..tinclude ….nadmonishment,t9 .,stick to.thee…..,.'''…,.,., ….,…, only subject on which we can claim any expertise—the behavior of financial markets. We do permit, ourselves, however. the occasional foray into social comment, and we take this liberty to discuss the saga of Mr. Michael Milken. The New York Times attempted a summary in the initial sentence of their initial editorial—Michael Milken is a crook. It noted that Mr. Milken had. himself. admitted. in his plea, that he committed a number of acts which were clearly in violation of federal law. He will. therefore. forfeit a large sum of money and. in all probability. spend some time in jail. Period. End of story. This denouement, however, seems strangely unsatisfying. Paradoxically, it must be equally unsatisfying to Milken's most fervent admirers and to his most avid detractors. The former have already begun to view their hero as the protagonist In a kind of Greek tragedy. a great man brought down by hubris. His derogators. on the other hand. must feel the same way observers did in the 1930's when Al Capone was finally indicted for income-tax evasion. It seems obvious even at this stage that Mr. Milken's name will go down in financial histol'Y. as associated with a single phrase—Junk Bonds. It is striking, therefore that there is almost no reference to these instruments in Milken's admission of guilt. If the junk bond market provides the catalyst for the sort of financial crisis that many analysts foresee. then 6.00 million plus a jail term will not come close to repaying society for the damage caused. If this collapse fails to occur. Mr. Milken may be vindicated as the Sir Galahad (or at least the Robin Hood) that his supporters claim him to be. lt is impossible, in our view, to separate the creator from his creation. We are thus forced to consider the junk bond. As an aside, one must note that, the very name – constitutes an example of the refreshing candor often found on Wall Street. The euphemism. ,,high-yield bond. indeed exists. but it is almost never used. The more raffish title is the one alofust unIversally used by market participants. But we digress. What is to be said about junk bonds beyond the fact that there are some 200 billion of them out there They are instruments entirely compatible with much modern financial theory. This theory denigrates the classical separation of capital gain and income. treating both as part of a total return. It argues. additionally. that above average return is achievable only by the assumption of additional risk. The junk bond. furnishing both high yield and high risk. is the perfect embodiment of this theory. Even the Times. in a follow-on editorial. came down firmly on the side of junk paper. It raised the familiar argument that such paper constitutes a means of obtaining financing for the 95 of American companies which do not enjoy high credit ratings. It sees such debt as being the savior of the entrepeneurial spirit. threatened by suffocation brought on by stodgy lending practices. Still, critics are entitled to ask, what are the consequences However noble the original intent might have been. did not junk ultimately come to be used as the fuel for takeovers and thus dissipate the energy of the financial community in paper shuffling at the cost of new investment in growth What of the failed S & Us. some of whose portfolios were loaded with high-yield paper Surely. it is argued. junk bonds are the invention of the devil and his name is Michael Milken. How will financial history treat the junk bond However uncomfortable it may be for those who favor portentious pronouncements, the answer is that we simply do not know. There exists, as noted above, largely in the hands of quasi-fiduciary investors, an enormous pile of such paper. Some has defaulted. More will default. Some will ultimately pay interest and principal on schedule. It will be years, nay decades, before we know What the ultimate return to investors in junk may be. One recalls a gentleman named Edgar Lawrence Smith Who; many years ago, penned a tome entitled. Common Stocks as Long-term Investments. Mr. Smith had the bad luck to write this piece in 1923 after which it was used for six years as an intellectual justification for ever-rising stock prices. The seol'n aimed at Smith's 81'gument after 1932 can easily be imagined. The long night of the stock market lasted 20 years. but. ironically. Smith was ultimately proved correct. Common stocks did turn out to be superior long-term investments. Whether the same will be true of junk bonds. only history will tell us. ANTHONY W. TAB ELL DELAFIELD. HARVEY. TAB ELL INC. Dow Jones Industrials (12 00) S & P 500 (12 00) Cumulative Index (5/3/90) 2695.95 336.05 4737.00 AWTebh No statement or expression of opinion or any other maner herein contained IS, or 1 to be deemed to be, directly or IndIrectly, an offer or the sollCltal!on of an offer to buy or sell any security referred to or mentIOned The matter IS presented merely fOr the convenience of the subscnber While we beheve the sources at our Information to be rehable, we In no way represent or guarantee the accuracy thereof nor clthe statements made herem Any action to be taken by the subSCriber should be based on hiS own Investigation and Information Delafield, Harvey, Tabell Inc, as a corporation and liS officers or employees, may now have, or may later take, poSitIons or trades In respeCI\O any seCUrltles mentioned In thts or any future Issue, and such pOSItion may be different /rom any Views now or hereafter expressed In thiS or any other Issue Dela/leld, Harvey, Tabellinc , whdt tS registered With the SEC as an Investment adVisor, may give adVice 10 lis Investment adVISOry and other customers Independently of any statements made In thiS or In any other ISSue Further in/ormation on any security mentioned herein IS available on request