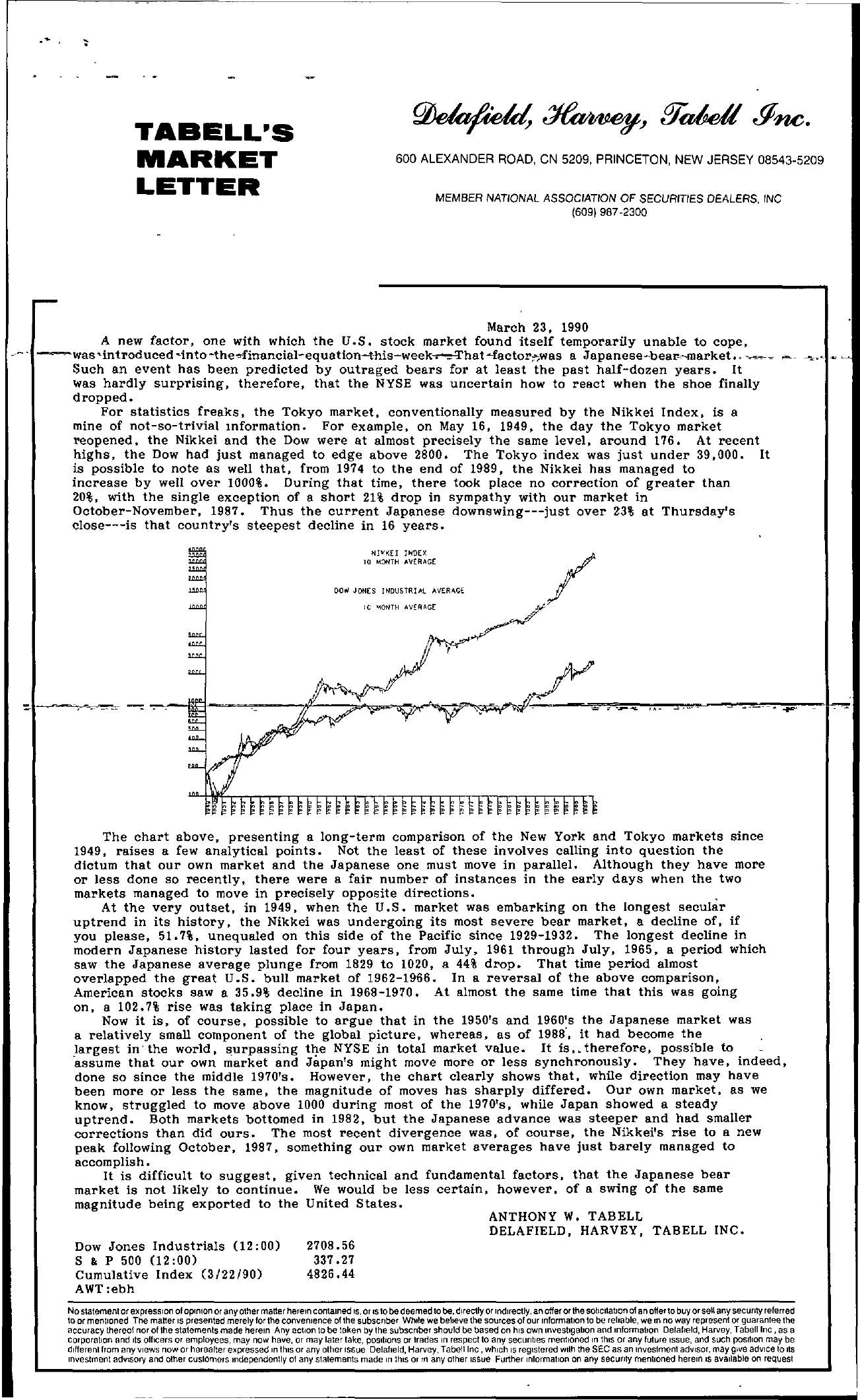 TABELL'S MARKET LETTER 600 ALEXANDER RDAD, CN 5209, PRINCETON, NEW JERSEY 085435209 MEMBER NATIONAL ASSOCIATION OF SECURITIES DEALERS, INC (609) 987 2300 March 23, 1990 A new factor, one with which the U.S. stock market found itself temporarily unable to cope, –. – w a s -introduced '-into -thefinancial-equation-t-his-weekhat –factor;w8s a J apanesebear-o'-market. — . Such an event has been predicted by outraged bears for at least the past half-dozen years. It was hardly surprising, therefore, that the NYSE was uncertain how to react when the shoe finally dropped. For statistics freaks, the Tokyo market, conventionally measured by the Nikkei Index, is a mine of not-so-trivial mformation. For example, on May 16, 1949, the day the Tokyo market reopened, the Nikkei and the Dow were at almost precisely the same level, around 176. At recent highs, the Dow had just managed to edge above 2800, The Tokyo index was just under 39,000. It is possible to note as well that, from 1974 to the end of 1989, the Nikkei has managed to increase by well over 1000. During that time, there took place no correction of greater than 20, with the single exception of a short 21 drop in sympathy with our market in October-November, 1987. Thus the current Japanese downswing—just over 23 at Thursday's elose—is that country's steepest decline in 16 years N!VKEI INDO( 10 ,)NTH .AVERAGE DOw JONES INDUSTRIAL AVERAGE Ie '10NTH AVERAGE The chart above, presenting a long-term comparison of the New York and Tokyo markets since 1949. raises a few analytical points. Not the least of these involves calling into question the dictum that our own market and the Japanese one must move in parallel. Although they have more or less done so recently. there were a fair number of instances in the early days when the two markets managed to move in precisely opposite directions. . At the very outset, in 1949, when the U.S. market was embarking on the longest secular uptrend in its history. the Nikkei was undergoing its most severe bear market, a decline of, if you please, 51.7, unequaled on this side of the Pacific since 1929-1932, The longest decline in modern Japanese history lasted for four years, from July, 1961 through July, 1965, a period which saw the Japanese average plunge from 1829 to 1020, a 44 drop. That time period almost overlapped the great U.S. bull market of 1962-1966. In a reversal of the above comparison, American stocks saw a 35.9 decline in 1968-1970. At almost the same time that this was going on, a 102.7 rise was taking place in Japan. Now it is, of course, possible to argue that in the 1950's and 1960's the Japanese market was a relatively small component of the global picture, whereas, as of 1988', it had become the largest in'the world, surpassing the NYSE in total market value. It is,. therefore, possible to 'assume that our own market and Japan's might move more or less synchronously. They have, indeed, done so since the middle 1970's. However, the chart clearly shows that, while direction may have been more or less the same, the magnitude of moves has sharply differed. Our own market, as we know, struggled to move above 1000 during most of the 1970's, while Japan showed a steady uptrend. Both markets bottomed in 1982, but the Japanese advance was steeper and had smaller corrections than did ours. The most recent divergence was, of course, the Nikkei's rise to a new peak following October, 1987, something our own market averages have just barely managed to accomplish. It is difficult to suggest, given technical and fundamental factors, that the Japanese bear market is not likely to continue. We would be less certain, however. of a swing of the same magnitude being exported to the United States. ANTHONY W. TABELL DELAFIELD, HARVEY, TAB ELL INC. Dow Jones Industrials 02 00) 2708.56 S & P 500 0200) 337.27 Cumulative Index (3/22/90) 4826.44 AWTebh No statement or expression of opInion or anyolher matter herein contained IS, or Islo bedeemed 10 be, directly or Indirectly, an offer orthe sohcrtatlon of an offer to buy orsel! any securrty referred to or mentioned The matter IS presented merely for the convenience 01 the subscflber While we bebeve the SOurces of our informatIOn to be rehable, we In no way represent or guarantee the accuracy thereof nor of the statements made herein Any action to be taken by the subSCriber should be based on hiS own Investigation and Informabon Delafield, Harvey, Taben Inc, as a Corporation and Its officers or employees, may now have, or may later take, pOSl\lons or trades In respect to any securities mentIOned In thiS or any future Issue, and such poSllion may be dlHerent from any views now or hereafter expressed In thiS or any other Issue Delafield, Harvey, Tabelllnc, which IS registered With the SEC as an Investment adVisor, may give adVice to Its Investment adVISOry and other cuslomers Independently of any statements made In thiS or 11'1 any other Issue Further information on any secuflty mentioned herem IS available on request