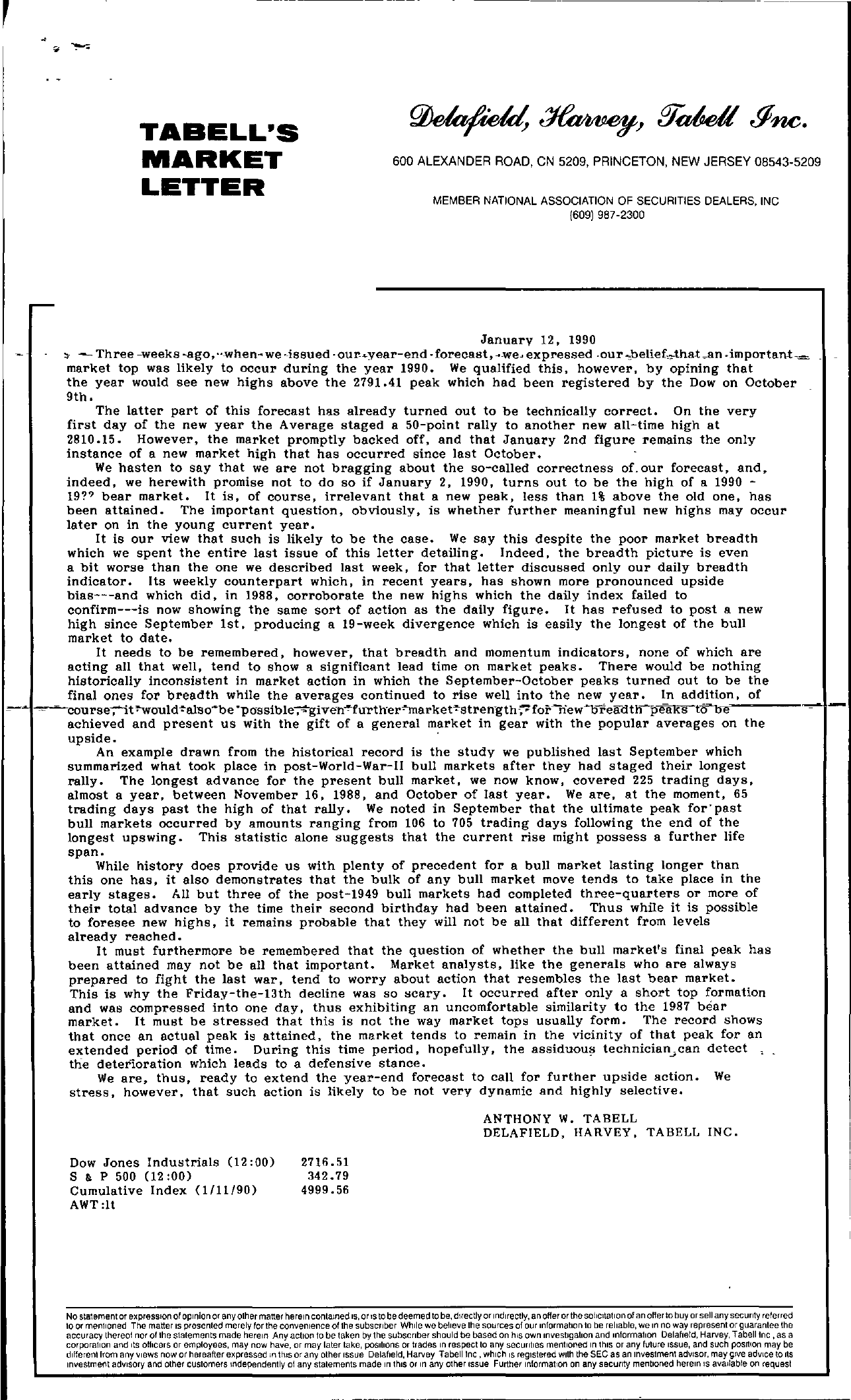 — ————- TABELL'S MARKET LETTER 600 ALEXANDER ROAD, CN 5209, PRINCETON, NEW JERSEY 08543-5209 MEMBER NATIONAL ASSOCIATION OF SECURITIES DEALERS, INC (609) 987-2300 January 12, 1990 -…. Three -weeks -ago, -when.. we ,-isBued our-year-end foreca8t ….-we expressed .ourbeliefthatan important- market top was likely to occur during the year 1990. We qualified this, however, by opining that the year would see new highs above the 2791.41 peak which had been registered by the Dow on October 9th. The latter part of this forecast has already turned out to be technically correct. On the very first day of the new year the Average staged a 50-point rally to another newall-time high at 2810.15. However, the market promptly backed off, and that January 2nd figure remains the only instance of a new market high that has occurred since last October. We hasten to say that we are not bragging about the so-called correctness of. our forecast, and, indeed, we herewith promise not to do so if January 2, 1990, turns out to be the high of a 1990 – 19 bear market. It is. of course, irrelevant that a new peak. less than 1 above the old one, has been attained. The important question. obviously. is whether further meaningful new highs may occur later on in the young current year. It is our view that such is likely to be the case. We say this despite the poor market breadth which we spent the entire last issue of this letter detailing. Indeed, the breadth picture is even a bit worse than the one we described last week, for that letter discussed only our daily breadth indicator. Its weekly counterpart which, in recent years. has shown more pronounced upside bias—and which did, in 1988, corroborate the new highs which the daily index failed to confirm—is now showing the same sort of action as the daily figure. It has refused to post a new high since September 1st, producing a 19-week divergence which is easily the longest of the bull market to date. It needs to be remembered. however, that breadth and momentum indicators. none of which are acting all that well, tend to show a significant lead time on market peaks. There would be nothing historically inconsistent in market action in which the September-October peaks turned out to be the final ones for breadth while the averages continued to rise well into the new year. In addition. of …. coul'se-;-it ould–alBo-be possiblegivEm-!-furtlrer–market'!-strength -for-riewbreadth-p–eEik-slobeC—–'- – achieved and present us with the gift of a general market in gear with the popular averages on the upside. ' An example drawn from the historical record is the study we published last September which summarized what took place in post-World-War-II bull markets after they had staged their longest rally. The longest advance for the present bull market. we now know, covered 225 trading days. almost a year, between November 16, 1988, and October of last year. We are, at the moment, 65 trading days past the high of that rally. We noted in September that the ultimate peak for'past bull markets occurred by amounts ranging from 106 to 705 trading days following the end of the longest upswing. This statistic alone suggests that the current rise might possess a further life span. While history does provide us with plenty of precedent for a bull market lasting longer than this one has, it also demonstrates that the bulk of any bull market move tends to take place in the early stages. All but three of the post-1949 bull markets had completed three-quarters or more of their total advance by the time their second birthday had been attained. Thus while it is possible to foresee new highs, it remains probable that they will not be all that different from levels already reached. It must furthermore be remembered that the question of whether the bull market's final peak has been attained may not be all that important. Market analysts, like the generals who are always prepared to fight the last war, tend to worry about action that resembles the last bear market. This is why the Friday-the-13th decline was so scary. It occurred after only a short top formation and was compressed into one day. thus exhibiting an uncomfortable similarity to the 1987 bear market. It must be stressed that this is not the way market tops usually form. The record shows that once an actual peak is attained. the market tends to remain in the vicinity of that peak for an extended period of time. During this time period. hopefully. the assiduou technician….. can detect the deterioration which leads to a defensive stance. We are, thus, ready to extend the year-end forecast to call for further upside action. We stress. however. that such action is likely to be not very dynamic and highly selective. ANTHONY W. TABELL DELAFIELD, HARVEY, TABELL INC. Dow Jones Industrials (12 00) S & P 500 (1200) Cumulative Index (1/11/90) AWT It 2716.51 342.79 4999.56 No statement or epresslon of opinion or any other matter herein contained IS, or IS to be deemed to be, directly or Indirectly, an oHer orthe soliCitatIOn of an oHer to buy or sell any security referred 10 or mentioned The matter IS presented merely for the convenience of the subscflber While we beheve the sources 01 our information to be reliable, we In no way represent or guarantee the accuracy thereof nor of the statements made herein Any action to be taken by the subscriber should be based on hiS own Investigation and Information Delafield, Harvey, Tabelllnc, as a corporation and Its officers or employees, may now have, or may later take, poSitions or trades In respect to any securities mentioned In thiS or any future Issue, and such position may be dlHerent from any views now or hereafter epressed 1(\ thiS or any other Issue Delafield, Harvey Tabell Inc, which IS reg1stered With the SEC as an Investment adVISor, may gIVe adVice to ItS Investment adVisory and other customers Independently 01 any statements made In thiS or In any other Issue Further informatIOn on any security mentioned herein IS available on request