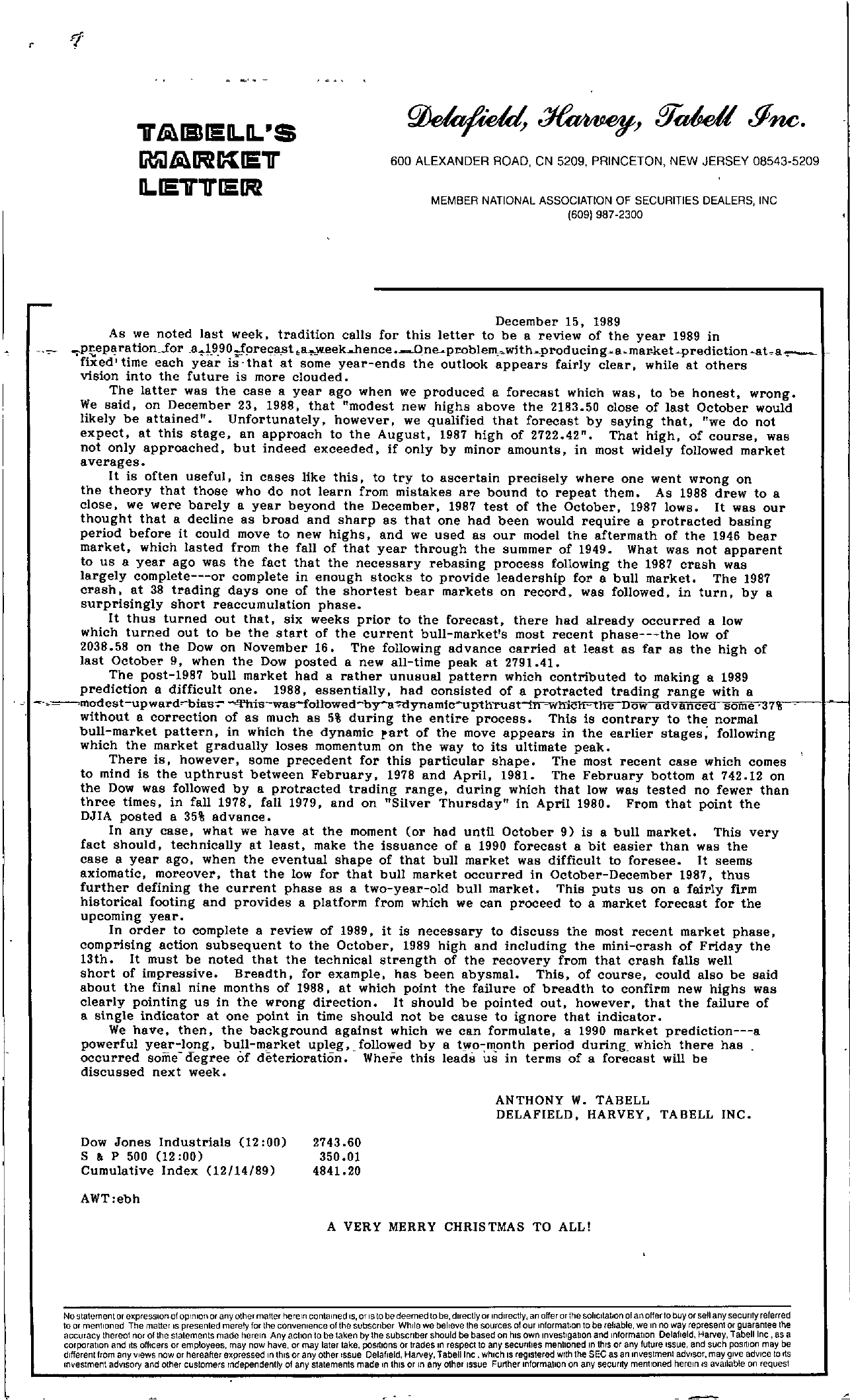 'U'IBUELL' S IRlIE'U' LIE'U''U'ERl 600 ALEXANDER ROAD, CN 5209, PRINCETON, NEW JERSEY 08543-5209 MEMBER NATIONAL ASSOCIATION OF SECURITIES DEALERS, INC (609) 987-2300 December 15, 1989 As we noted last week, tradition calls for this letter to be a review of the year 1989 in -;-Pteprationfor Q-t9.90;…fpre9BSt !-aYleek..ahence .-..Qne…..problewith…..producing-,,-a .. mar-ket …prediction ata fixed l time each year is-that at some year-ends the outlook appears fairly clear, while at others vision into the future is more clouded. The latter was the case a year ago when we produced a forecast which was, to be honest, wrong. We said, on December 23, 1988, that modest new highs above the 2183.50 close of last October would likely be attained It Unfortunately, however, we qualified that forecast by saying that, we do not expect, at this stage, an approach to the August, 1987 high of 2722.42. That high, of course, was not only approached, but indeed exceeded, if only by minor amounts, in most widely followed market averages. It is often useful, in cases like this, to try to ascertain precisely where one went wrong on the theory that those who do not learn from mistakes are bound to repeat them. As 1988 drew to a close, we were barely a year beyond the December, 1987 test of the October, 1987 lows. It was our thought that a decline as broad and sharp as that one had been would require a protracted basing period before it could move to new highs, and we used as our model the aftermath of the 1946 bear market, which lasted from the fall of that year through the summer of 1949. What was not apparent to us a year ago was the fact that the necessary rebasing process following the 1987 crash was largely complete—or complete in enough stocks to provide leadership for a bull market. The 1987 crash. at 38 trading days one of the shortest bear markets on record, was fOllowed. in turn, by a surprisingly short reaccumulation phase. It thus turned out that, six weeks prior to the forecast, there had already occurred a low which turned out to be the start of the current bull-market's most recent phase—the low of 2038.58 on the Dow on November 16. The following advance carried at least as far as the high of last October 9, when the Dow posted a newall-time peak at 2791.41. The post-1987 bull market had a rather unusual pattern which contributed to making a 1989 prediction a difficult one. 1988, essentially, had consisted of a protracted trading range with a -modest-upward-bias-, -This-was.-followed….by-alynamic…..uptl'i'rust4n-whlDow—aavanced some 37,.-1–' without a correction of as much as 5 during the entire process. This is contrary to the normal bull-market pattern, in which the dynamic rart of the move appears in the earlier stages; following which the market gradually loses momentum on the way to its ultimate peak. There is, however, some precedent for this particular shape. The most recent case which comes to mind is the upthrust between February, 1978 and April, 1981. The February bottom at 742.12 on the Dow was followed by a protracted trading range, during which that low was tested no fewer than three times, in fall 1978, fall 1979, and on Silver Thursday in April 1980. From that point the DJIA posted a 35 advance. In any case, what we have at the moment (or had until October 9) is a bull market. This very fact should, technically at least, make the issuance of a 1990 forecast a bit easier than was the case a year ago, when the eventual shape of that bull market was difficult to foresee. It seems axiomatic, moreover, that the low for that bull market occurred in October-December 1987, thus further defining the current phase as a two-year-old bull market. This puts us on a fairly firm historical footing and provides a platform from which we can proceed to a market forecast for the upcoming year. In order to complete a review of 1989, it is necessary to discuss the most recent market phase, comprising action subsequent to the October, 1989 high and including the mini-crash of Friday the 13th. It must be noted that the technical strength of the recovery from that crash falls well short of impressive. Breadth, for example, has been abysmal. This, of course, could also be said about the final nine months of 1988, at which point the failure of breadth to confirm new highs was clearly pointing us in the wrong direction. It should be pointed out, however, that the failure of a single indicator at one point in time should not be cause to ignore that indicator. We have, then, the background against which we can formulate, a 1990 market prediction—a powerful year-long, bull-market upleg, followed by a t!Vo,-onth period during. which there has occurred some-degree of deterioration. Where this leads us in terms of a forecast will be discussed next week. ANTHONY W. TAB ELL DELAFIELD, HARVEY, TABELL INC. Dow Jones Industrials (12 00) S & P 500 (1200) Cumulative Index (12114189) 2743.60 350.01 4841.20 AWTebh A VERY MERRY CHRISTMAS TO ALL! No statement or expression of opinion or any other mailer herern contarned IS, or IS to be deemed to be, dlrecUy or Indirectly, an offer or the soliCitatIOn of an offer to buy or sen any security referred to or mentioned The matter IS presented merely for the convemence of the subSCriber While we believe the sources of our Informallon to be reliable, we rn no way represent or guarantee the accuracy thereot nor of the statements made herein Any action to be laken by the subSCriber should be based on hiS own Investigation and rnformatlon Delafield, Harvey, Tabelllnc, as a corporation and lis officers or employees, may now have, or may later take, pos!tlons or trades rn respect to any secunltes mentioned In thiS or any future Issue, and such posilion may be different from any views now or hereafter expressed In thiS or any other Issue Delafield, Harvey, Tabelllnc, which IS registered with the SEC as an rnvestment adVisor, may give adVice to Its Investment adVISOry and other cuslomers Independently of any statements made In thiS or In any other Issue Further Information on any security mentioned herein IS avallable on request