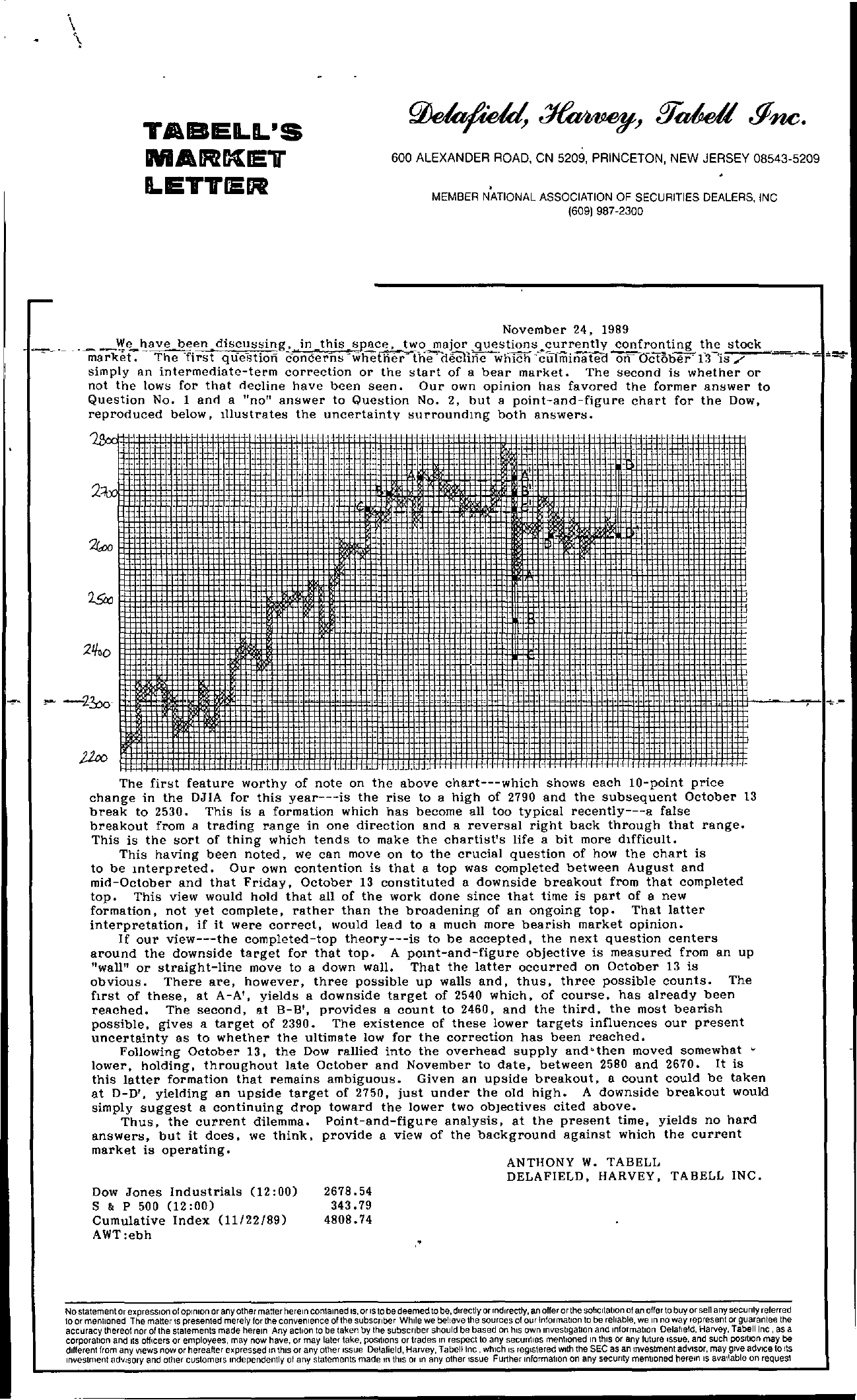 \ \ TABEo..o..'S MARKET LETTER 600 ALEXANDER ROAD, CN 5209, PRINCETON, NEW JERSEY 08543-5209 MEMBER NATIONAL ASSOCIATION OF SECURITIES DEALERS, INC (609) 987-2300 November 24, 1989 – – — ma rkpet,.h Thee-fnirs t discussi questio n n g. c in onc this erns – space, whetlie rt-wtohmdaejocrnquwehsiticohn s..currently cufminatea confronting the stock on- octOber f3-'is'/ .,,; I simply An intermediate-term correction or the start of a bear market. The second is whether or not the lows for that rtecline have been seen. Our own opinion has favored the former answer to Question No.1 and a no answer to Question No.2, but a point-and-figure chart for the Dow, reproduced below. lllustrates the uncertainty surroundmg both answer!i. 00 .-I I21foo .- -lY.o Uroli H The first feature worthy of note on the above chart—which shows each lO-point price change in the DJIA for this year—is the rise to a high of 2790 and the subsequent October 13 break to 2530, This is a formation which has become all too typical recently—a false breakout from a trading range in one direction and a reversal right back through that range. This is the sort of thing which tends to make the chartist's life a bit more dIfficult. This having been noted. we can move on to the crucial question of how the chart is to be lnterpreted. Our own contention is that a top was completed between August and mid-October and that Friday, October 13 constituted a downside breakout from that completed top. This view would hold that all of the work done since that time is part of a new formation, not yet complete, rather than the broadening of an ongoing top. That latter interpretation, if it were correct. would lead to a much more bearish market opinion. If our view—the completed-top theory—is to be accepted, the next question centers around the downside target for that top. A polOt-and-figure objective is measured from an up wall or straight-line move to a down wall. That the latter occurred on October 13 is obvious. There are, however, three possible up walls and, thus, three possible counts. The fIrst of these, at A-A', yields a downside target of 2540 which, of course, has already been reAched. The second. at B-B', provides a count to 2460, and the third, the most bearish possible. gives a target of 2390. The existence of these lower targets influences our present uncertainty as to whether the ultimate low for the correction has been reached. Following October 13, the Dow rallied into the overhead supply and then moved somewhat … lower, holding, throughout late October and November to date, between 2580 and 2670. It is this latter formation that remains ambiguous. Given an upside breakout. a count could be taken at 0-0', yielding an upside target of 2750, just under the old high. A downside breakout would simply suggest a continuing drop toward the lower two objectives cited above. Thus, the current dilemma. Point-and-figure analysis, at the present time, yields no hard answers, but it does. we think. provide a view of the background against Which the current market is operating. ANTHONY W. TABELL DELAFIELD, HARVEY, TABELL INC. Dow Jones Industrials (12 00) 2678.54 S & P 500 (12 00) 343.79 Cumulative Index (11/22/89) 4808.74 AWTebh No statement Or expression of oplnton or any other matter herem contained IS, or IS to be deemed to be, directly or Indirectly, an offer or the soliCitation of an offer to buy or sell any secunty referred 10 or menlloned The matter IS presented merely for the convenience of the subSCriber While we behave the sources of our Information to be reliable, we In no way represent or guarantee the accuracy thereof nor althe statements made herein Any achon to be taken by the subscriber should be based on hiS own InvestigatIOn and Information Delafield, Harvey, labelllnc, as a corporal1On and lIs ofhcers or employees, may now have, or may laler lake, poS!ltOns or trades In respect to any securities mentioned In thiS or any future Issue, and such posrtlOn may be different from any views now or hereafter expressed In thiS or any other Issue Delafield, Harvey, Taben Inc, which IS registered wIth the SEC as an Investment adVisor, may give adVice to Its Investment adVisory and other customers Independently of any statements made ,n thiS or In any other Issue Further informatIOn on any security mentioned herein IS available on request