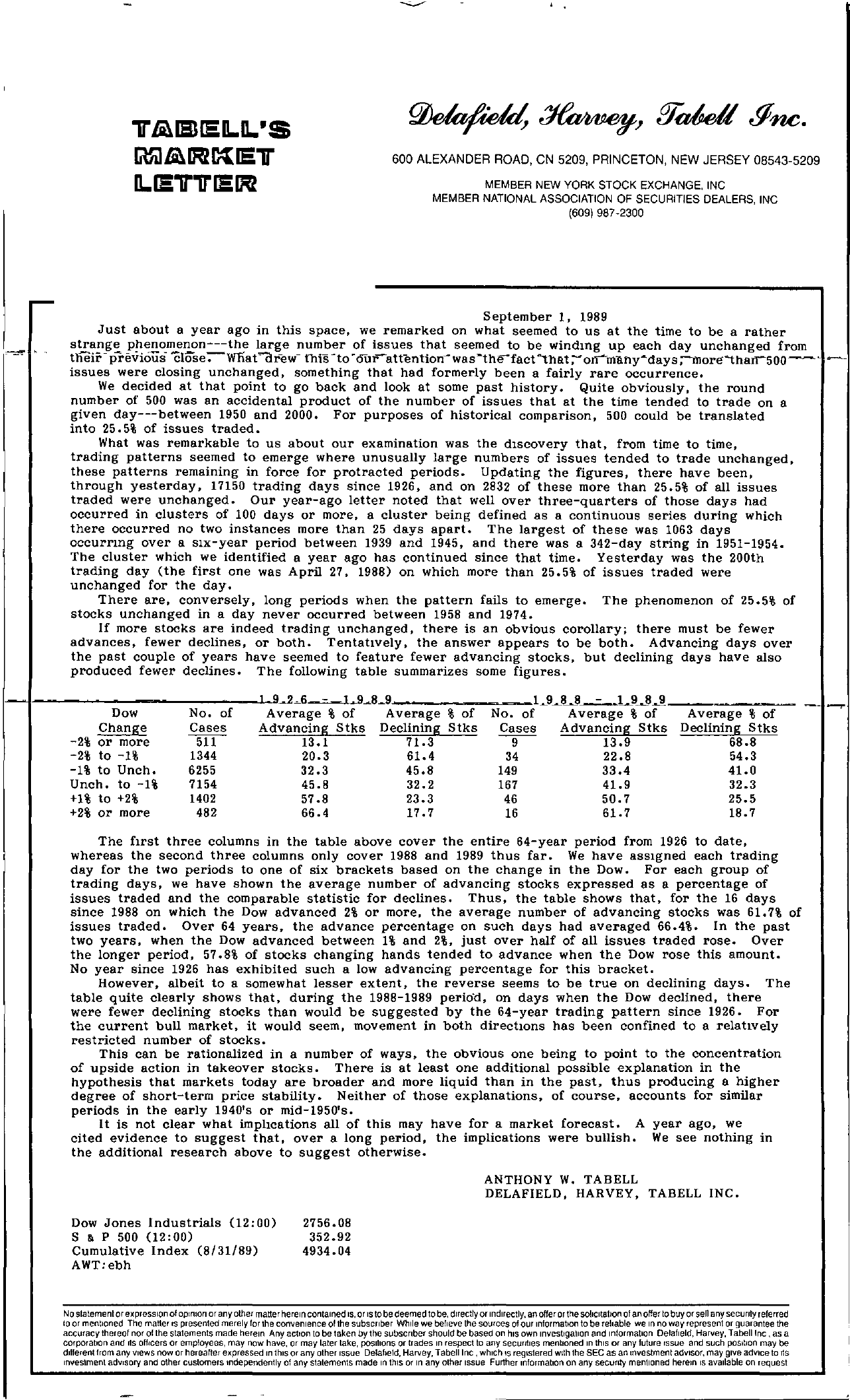 1Li\ (lUE IL.IL.' S Li\IRlIE1 1L.lE11lEIRl 600 ALEXANDER ROAD, CN 5209, PRINCETON, NEW JERSEY 08543-5209 MEMBER NEW YORK STOCK EXCHANGE, INC MEMBER NATIONAL ASSOCIATION OF SECURITIES DEALERS, INC (609) 987 -2300 September 1. 1989 Just about a year ago in this space. we remarked on what seemed to us at the time to be a rather strange phenomenon—the large number of issues that seemed to be windlng up each day unchanged from tnei!, – previous cIose-.-WIlat(\rew- this -toQurattention- was-the-fact that- 0I1mll.ny-days ;-mor,,'thaI1500– – issues were closing unchanged. something that had formerly been a fairly rare occurrence. We decided at that point to go back and look at some past history. Quite obviously, the round number of 500 was an accidental product of the number of issues that at the time tended to trade on a given day—between 1950 and 2000. For purposes of historiCal comparison, 500 could be translated into 25.5 of issues traded. What was remarkable to us about our examination was the dlscovery that. from time to time. trading patterns seemed to emerge where unusually large numbers of issues tended to trade unchanged. these patterns remaining in force for protracted periods. Updating the figures, there have been, through yesterday, 17150 trading days since 1926, and on 2832 of these more than 25.5 of all issues traded were unchanged. Our year-ago letter noted that well over three-quarters of those days had occurred in clusters of 100 days or more. a cluster being defined as a continuous series during which there occurred no two instances more than 25 days apart. The largest of these was 1063 days occurrmg over a SIx-year period between 1939 and 1945, and there was a 342-day string in 1951-1954. The cluster which we identified a year ago has continued since that time. Yesterday was the 200th trading day (the first one was April 27, 1988) on which more than 25.5 of issues traded were unchanged for the day. There are, conversely, long periods when the pattern fails to emerge. The phenomenon of 25.5 of stocks unchanged in a day never occurred between 1958 and 1974. If more stocks are indeed trading unchanged. there is an obvious corollary; there must be fewer advances, fewer declines, or both. TentatIvely, the answer appears to be both. Advancing days over the past couple of years have seemed to feature fewer advancing stocks. but declining days have also produced fewer declines. The following table summarizes some figures. Dow Change -2 or more -2 to -1 -1 to Unch. Unch. to -1 1 to 2 2 or more No. of Cases 1344 6255 7154 1402 482 1 9-.1L6 9-.89 Average of Average of Advancing Stks Declining Stks 13.1 71.3 20.3 61.4 32.3 45.8 45.8 32.2 57.8 23.3 66.4 17.7 L9IUt.L9–1lJ. No. of Average of Cases Advancing Stks -9- 13.9 34 22.8 149 33.4 167 41.9 46 50.7 16 61.7 Average of Declining Stks 68.8 54.3 41.0 32.3 25.5 18.7 — -. The fIrst three columns in the table above cover the entire 64-year period from 1926 to date, whereas the second three columns only cover 1988 and 1989 thus far. We have assIgned each trading day for the two periods to one of six brackets based on the change in the Dow. For each group of trading days, we have shown the average number of advancing stocks expressed 8S a percentage of issues traded and the comparable statistic for declines. Thus, the table shows that, for the 16 days since 1988 on which the Dow advanced 2 or more, the average number of advancing stocks was 61.7 of issues traded. Over 64 years, the advance percentage on such days had averaged 66.4. In the past two years, when the Dow advanced between 1 and 2, just oVer half of all issues traded rose. Over the longer period, 57.8 of stocks changing hands tended to advance when the Dow rose this amount. No year since 1926 has exhibited such a low advancing percentage for this bracket. However, albeit to a somewhat lesser extent, the reverse seems to be true on declining daysw The table quite clearly shows that, during the 1988-1989 period, on days when the Dow declined, there were fewer declining stocks than would be suggested by the 64-year trading pattern since 1926. For the current bull market, it would seem, movement in both directIons has been confined to 8 relatively restricted number of stocks. This can be rationalized in a number of ways, the obvious one being to point to the concentration of upside action in takeover stocks. There is at least one additional possible explanation in the hypothesis that markets today are broader and more liquid than in the past, thus producing a higher degree of short-term price stability. Neither of those explanations, of course, accounts for similar periods in the early 1940's or mid-1950's. It is not clear what implIcations all of this may have for a market forecast. A year ago, we cited evidence to suggest that. over a long period, the implications were bullish. We see nothing in the additional research above to suggest otherwise. ANTHONY W. TABELL DELAFIELD, HARVEY, TABELL INC. Dow Jones Industrials (1200) S & P 500 (1200) Cumulative Index (8/31/89) AWTebh 2756.08 352.92 4934.04 No statement or e)(presslQn of opInion or any other matter herein contained IS, or IS to bedeemed to be, dlrectty or indirectly, an offer or the soliCitation of an offer to buy or sen any security referred to or menhoned The matter IS presented merety for the convenience of the subSCriber While we beheve the sources of our information to be reliable we In no way represent or guarantee the accuracy thereof nor of the statements made herein Any action to be taken by the subSCriber should be based on hiS own Invesllgatlon and InformatIOn Delafield, Harvey, Tabelltnc , as a corporation and lIS oH!cers or employees, may now have, or may later take, poSitions or trades In respect to any seCUrities mentIOned In thiS or any future Issue and such poSItion may be different from any views now or hereafter expressed In thiS or any other Issue Delafield, Harvey, Tabellinc , which IS registered WIth the SEC as an Investment adVisor, may give adVice to lis Investment adVISOry and other customers Independently of any statements made In thiS or In any other Issue Further information on any security mentioned hereIn IS available on request