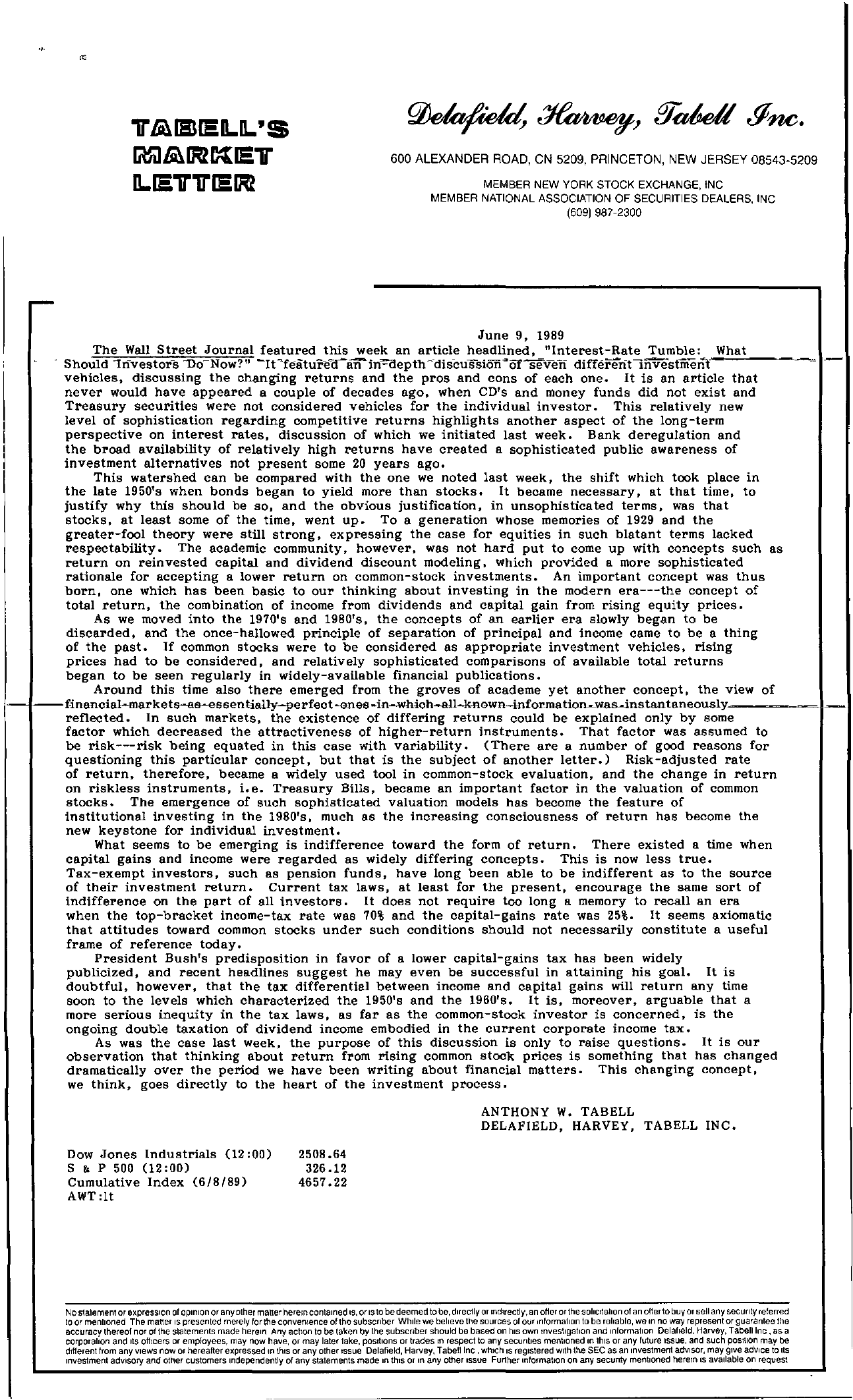 VLinlmrEn.n.-s LinIRlIEV LrEVV(E1Rl 600 ALEXANDER ROAD, CN 5209, PRINCETON, NEW JERSEY 08543-5209 MEMBER NEW YORK STOCK EXCHANGE, INC MEMBER NATIONAL ASSOCIATION OF SECURITIES DEALERS, INC (609) 987-2300 June 9, 1989 The Wall Street Journal Should 'nvestors 10 Now -f1eta'tfuerieidtutrheids-awnienekdaenptahrtdiicsl ecuhsseiaodnli nOfe d,seveInnt edriefsfte-rRenatt elhvTeusmtmbelre1 tW;;hat ''- vehicles, discussing the changing returns and the pros and cons of each one. It is an article that never would have appeared a couple of decades ago, when CD's and money funds did not exist and Treasury securities were not considered vehicles for the individual investor. This relatively new level of sophistication regarding competitive returns highlights another aspect of the long-term perspective on interest rates, discussion of which we initiated last week. Bank deregulation and the broad availability of relatively high returns have created a sophisticated public awareness of investment alternatives not present some 20 years ago. This watershed can be compared with the one we noted last week, the shift which took place in the late 1950's when bonds began to yield more than stocks. It became necessary. at that time, to justify why this should be so, and the obvious justification, in unsophisticated terms, was that stocks, at least some of the time, went up. To a generation whose memories of 1929 and the greater-fool theory were still strong, expressing the case for equities in such blatant terms lacked respectability The academic community, however. was not hard put to come up with concepts such as return on reinvested capital and dividend discount modeling. Which provided a more sophisticated rationale for accepting a lower return on common-stock investments. An important concept was thus born, one which has been basic to our thinking about investing in the modern era—the concept of total return, the combination of income from dividends and capital gain from rising equity prices. As we moved into the 1970's and 1980's, the concepts of an earlier era slowly began to be discarded, and the once-hallowed principle of separation of principal and income came to be a thing of the past. If common stocks were to be considered as appropriate investment vehicles, rising prices had to be considered. and relatively sophisticated comparisons of available total returns began to be seen regularly in widely-available financial publications. Around this time also there emerged from the groves of academe yet another concept, the view of –financial–markets-e.-s–essenHaUy–perfectGnes …in.-.whioh-an-k-nG-wn-i-nfor-mation-'.-was.-instantaneously 1 reflected. In such markets, the existence of differing returns could be explained only by some factor which decreased the attractiveness of higher-return instruments. That factor was assumed to be risk—risk being equated in this case with variability. (There are a number of good reasons for questioning this particular concept, but that is the subject of another letter.) Risk-adjusted rate of return. therefore, became a widely used tool in common-stock evaluation, and the change in return on riskless instruments. i.e. Treasury Bills, became an important factor in the valuation of common stocks. The emergence of such sophisticated valuation models has become the feature of institutional investing in the 1980's, much as the increasing consciousness of return has become the new keystone for individual investment. What seems to be emerging is indifference toward the form of return. There existed a time when capital gains and income were regarded as widely differing concepts. This is now less true. Tax-exempt investors. such as pension funds, have long been able to be indifferent as to the source of their investment return. Current tax laws, at least for the present, encourage the same sort of indifference on the part of all investors. It does not require too long a memory to recall an era when the top-bracket income-tax rate was 70 and the capital-gains rate was 25. It seems axiomatic that attitudes toward common stocks under such conditions should not necessarily constitute a useful frame of reference today. President Bush's predisposition in favor of a lower capital-gains tax has been widely publicized, and recent headlines suggest he may even be successful in attaining his goal. It is doubtful, however, that the tax differential between income and capital gains will return any time soon to the levels which characterized the 1950's and the 1960's. It is, moreover, arguable that a more serious inequity in the tax laws, as far as the common-stock investor is concerned, is the ongoing double taxation of dividend income embodied in the current corporate income tax. As was the case last week, the purpose of this discussion is only to raise questions. It is our observation that thinking about return from rising common stock prices is something that has changed dramatically over the period we have been writing about financial matters. This changing concept, we think, goes directly to the heart of the investment process. ANTHONY W. TABELL DELAFIELD, HARVEY, TABELL INC. Dow Jones Industrials (12 00) S & P 500 (1200) Cumulative Index (618189) AWTlt 2508.64 326.12 4657.22 No statement or expression 01 opinion or any other matter herein contained IS, or IS to be deemed to be, directly or Indirectly, an otler or the sohcltatlon of an oHer to buy or sell any secUrity referred to or mentioned The matter IS presented mereJy for the convemence of the subscnber While we beheve the sources of our information to be rehable, we In no way represent or guarantee the accuracy thereof nor of the statements made herein Any action to be taken by the subscriber should be based on his own investigation and information Delafield, Harvey, Tabelllnc, as a corporallon and Its oHlcers or employees, may now have, or may later take, posItIOns or trades In respect to any securities mentIOned In thiS or any future Issue, and such position may be different from any views now or hereafter expressed In thiS or any other Issue Delafield, Harvey, Tabellinc ,which IS registered With the SEC as an Investment advisor, may give adVice to ItS Investment adVISOry and other customers Independently of any statements made In thiS or In any other Issue Further informatIOn on any secunty mentioned herem IS available on request