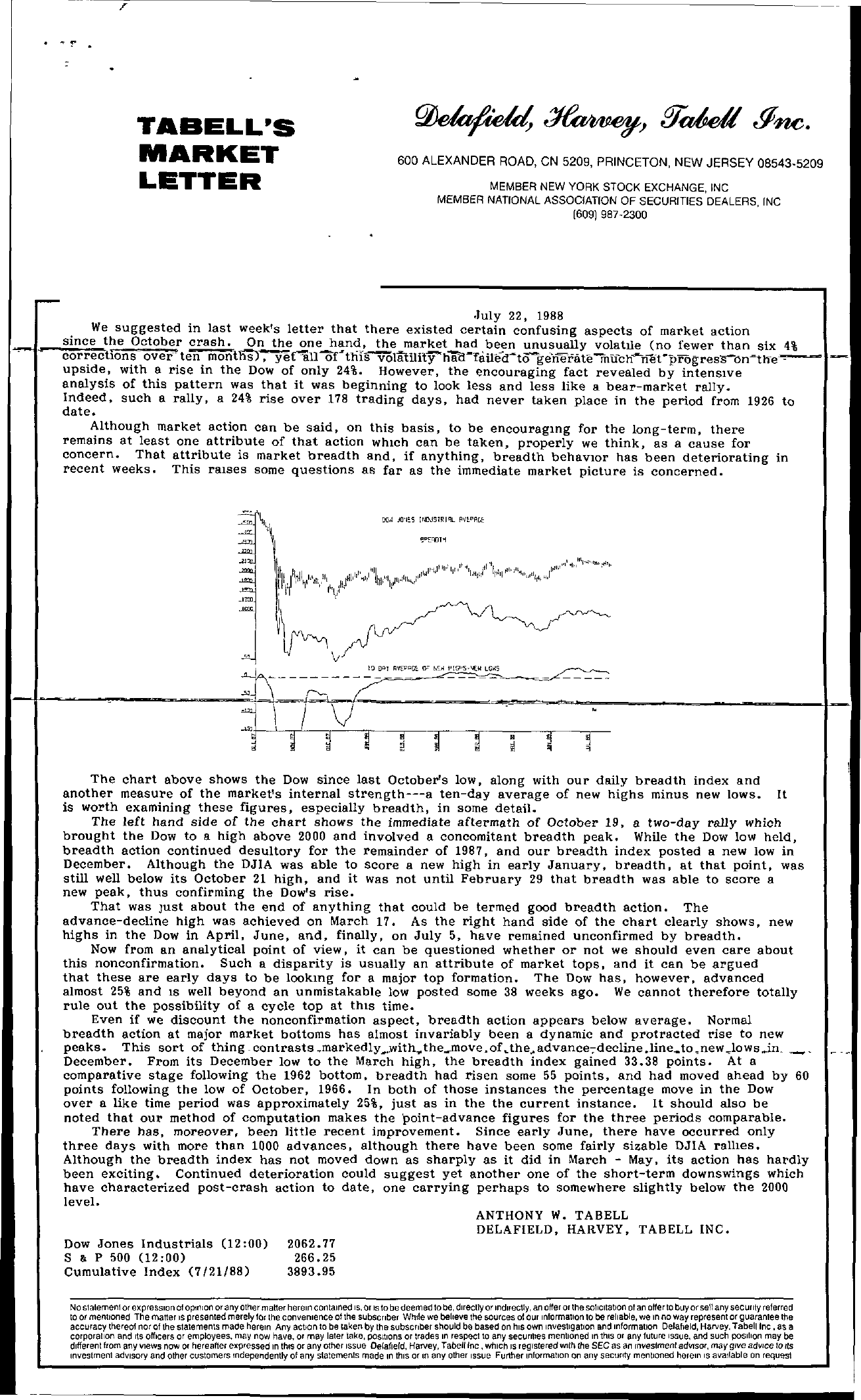 … '! TABELL'S MARKET LETTER 600 ALEXANDER ROAD, CN 5209, PRINCETON, NEW JERSEY 08543-5209 MEMBER NEW YORK STOCK EXCHANGE, INC MEMBER NATIONAL ASSOCIATION OF SECURITIES DEALERS, INC 1609) 987-2300 ,July 22, 1988 We suggested in last week's letter that there existed certain confusing aspects of market action since the October crash. On the one hand, the market had been unusually volatIle (no fewer than six 4 corrections over ten montllSJ, yetiillOr't1irSVoratilityhiilJ-raileatoge-neratem(ichnetprogresg–on'tl1e'—- –upside, with a rise in the Dow of only 24. However, the encouraging fact revealed by intensIve analysis of this pattern was that it was beginning to look less and less like a bear-market rally. Indeed, such a rally, a 24 rise over 178 trading days, had never taken place in the period from 1926 to date. Although market action can be said, on this basis, to be encouragIng for the long-term, there remains at least one attribute of that action WhICh can be taken, properly we think, as a cause for concern. That attribute is market breadth and, if anything, breadth behavIor has been deteriorating in recent weeks. This raIses some questions as far as the immediate market picture is concerned. – – Ij 5 \ I, ; V The chart above shows the Dow since last October's low, along with our daily breadth index and another measure of the market's internal strength—a ten-day average of new highs minus new lows. It is worth examining these figures, especially breadth, in some detail. The left hand side of the chart shows the immediate aftermath of October 19, a two-day rally which brought the Dow to a high above 2000 and involved a concomitant breadth peak. While the Dow low held, breadth action continued desultory for the remainder of 1987, and our breadth index posted a new low in December. Although the DJIA was able to Score a new high in early January, breadth, at that point, was still well below its October 21 high, and it Was not until February 29 that breadth was able to score a new peak, thus confirming the Dow's rise. That was Just about the end of anything that could be termed good breadth action. The advance-decline high was achieved on March 17. As the right hand side of the chart clearly shows, new highs in the Dow in April, June, and, finally, on July 5, have remained unconfirmed by breadth. Now from an analytical pOint of view, it can be questioned whether or not we should even care about this nonconfirmation. Such a disparity is usually an attribute of market tops, and it can be argued that these are early days to be lookmg for a major top formation. The Dow has, however, advanced almost 25 and IS well beyond an unmistakable low posted Some 38 weeks ago. We cannot therefore totally rule out the possibility of a cycle top at thIS time. Even if we discount the nonconfirmation aspect, breadth action appears below average. Normal breadth action at major market bottoms has almost invariably been a dynamic and protracted rise to new peaks. This sort of thing contrasts markedlywith.,. themoveof .. the.. advance-;decline lineto new ..-lows …in December. From its December low to the March high, the breadth index gained 33.38 pOints. At a comparative stage following the 1962 bottom, breadth had risen some 55 pOints, and had moved ahead by 60 points following the low of October, 1966. In both of those instances the percentage move in the Dow over a like time period was approximately 25, just as in the the current instance. It should also be noted that our method of computation makes the 'point-advance figures for the three periods comparable. There has, moreover, been little recent improvement. Since early June, there have occurred only three days with more than 1000 advances, although there have been some fairly sizable DJIA rallIes. Although the breadth index has not moved down as sharply as it did in March – May, its action has hardly been exciting Continued deterioration could suggest yet another one of the short-term downswings which have characterized post-crash action to date, one carrying perhaps to somewhere slightly below the 2000 level. ANTHONY W. TABELL DELAFIELD, HARVEY, TAB ELL INC. Dow Jones Industrials (12 00) 2062.77 S & P 500 (1200) 266.25 Cumulative Index (7121188) 3893.95 No statement or expression of opinion or any other matter herein contained IS, or IS 10 be deemed to be, directly or Indirectly, an offer or the solicitation of an offerlc buy or sell any security referred to or mentioned The matter IS presented merely for the convenience 01 the subsCriber While we beheve the sources oj our information to be reliable, we In no way represent or guarantee the accuracy thereof nor Qf the statements made herein Any acllon to be taken by the subsCriber should be based on hiS own Investigation and information Delafleld, Harvey, Tabelllnc, as a corporation and ItS officers or employees, may now have, or may later lake, pOSlllOns or trades In respactto any securlhes mentioned In thiS or any future Issue, and such position may be different from any views now or hereafter expressed In this or any other Issue Delafield, Harvey, Tabellinc , which IS registered With the SEC as an Investment adVIsor, may grve adVIce to lIS Investment adVISOry and other customers Independently of any statements made In thiS or In any other Issue Further Information on any security mentioned herein IS available on request \