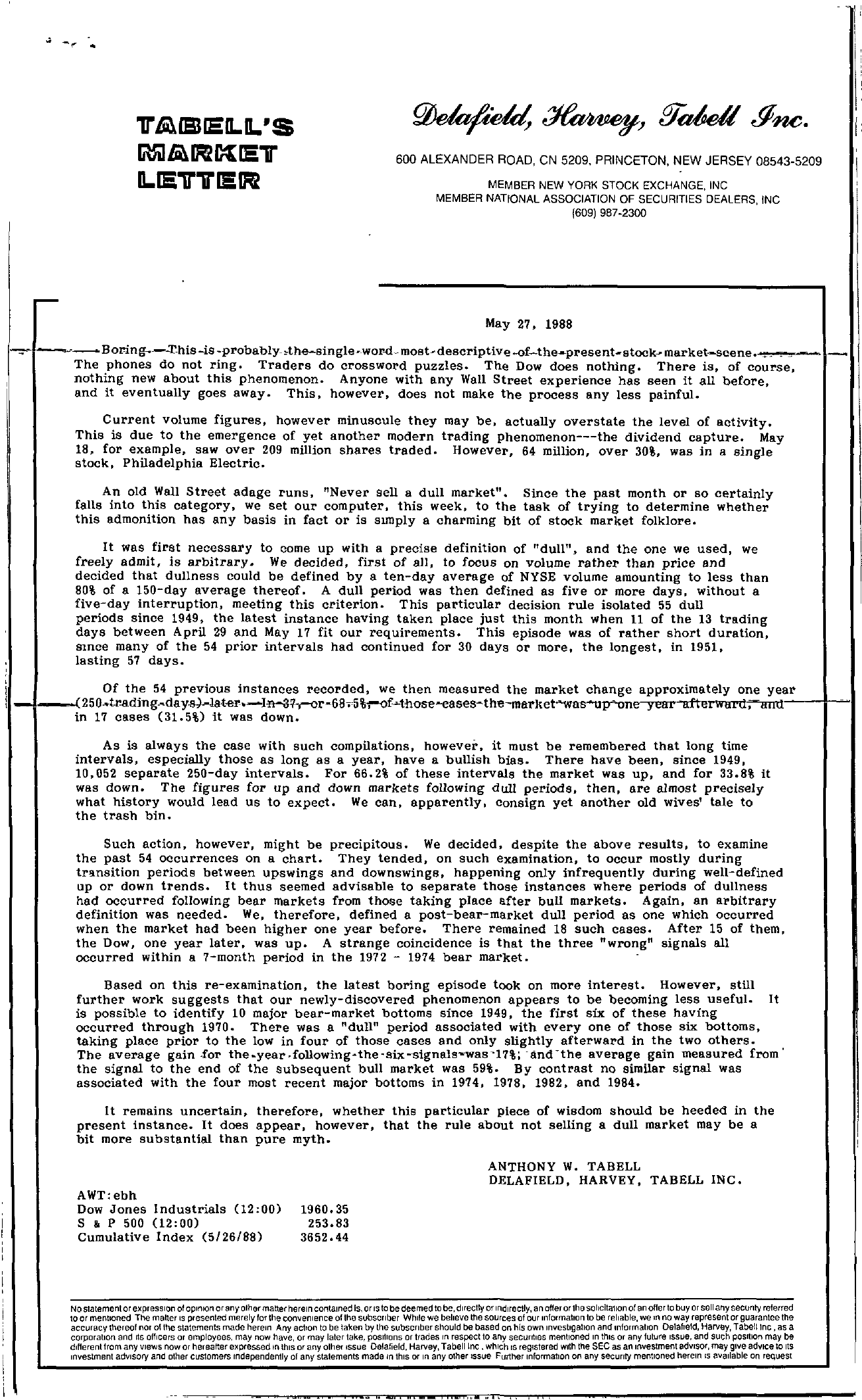 ,- -I.! I '11liil i J lEO. 0 . ' S Iil1lI& lE'1I D..IEV'1IlER 600 ALEXANDER ROAD, CN 5209, PRINCETON, NEW JERSEY 08543-5209 MEMBER NEW YORK STOCK EXCHANGE, INC MEMBER NATIONAL ASSOCIATION OF SECURITIES DEALERS, INC 1609) 987-2300 May 27, 1988 – – . . . . -Borin g…–T-his -is -probably- th-e-.singleJ-wor-d most.. descriptive ….()fthe—prese nt… s tock-' market-scene .',, I The phones do not ring. Traders do crossword puzzles. The Dow does nothing. There is, of course, nothing new about this phenomenon. Anyone with any Wall Street experience has seen it all before, and it eventually goes away. This, however, does not make the process any less painful. Current volume figures, however minuscule they may be. actually overstate the level of activity. This is due to the emergence of yet another modern trading phenomenon–the dividend capture. May 18, for example, saw over 209 milHon shares traded. However, 64 million. over 30, was in a single stock, Philadelphia Electric. An old Wall Street adage runs, Never sell a dull market Since the past month or so certainly falls into this category, we set our computer, this week, to the task of trying to determine whether this admonition has any basis in fact or is sImply a charming bit of stock market folklore. It was first necessary to come up with a precise definition of dull, and the one we used, we freely admit, is arbitrary.. We decided, first of all, to focus on volume rather than price and decided that dullness could be defined by a tenday average of NYSE volume amounting to less than 80 of a 150day average thereof. A dull period was then defined as five or more days, without a fiveday interruption, meeting this criterion. This particular decision rule isolated 55 dull periods since 1949, the latest instance having taken place just this month when 11 of the 13 trading days between April 29 and May 17 fit our requirements. This episode was of rather short duration, SInce many of the 54 prior intervals had continued for 30 days or more, the longest, in 1951. lasting 57 days. Of the 54 previous instances recorded, we then measured the market change approximately one year -(250tadingday,,,at'''.-I'fI-3.,-Jr-6S,5k-ofAhose–cases-the-market-was-up'(me–year–..fterwartl-;-mrd—I-I in 17 cases (31.5) it was down. As is always the case with such compilations. however, it must be remembered that long time intervals, especially those as long as a year, have a bullish bias. There have been. since 1949, 10,052 separate 250-day intervals. For 66.2 of these intervals the market was up, and for 33.8 it was down. The figures for up and down markets following dull periods, then, are almost precisely what history would lead us to expect. We can, apparently, consign yet another old wives' tale to the trash bin. Such action, however, might be precipitous. We decided, despite the above results, to examine the past 54 occurrences on a chart. They tended, on such examination, to occur mostly during transition periods between upswings and downswings, happening only infrequently during welldefined up or down trends It thus seemed advisable to separate those instances where periods of dullness had occurred following bear markets from those taking place after bull markets. Again, an arbitrary definition was needed. We, therefore, defined a post-bear-market dull period as one which occurred when the market had been higher one year before. There remained 18 such cases. After 15 of them, the Dow, one year later. was up. A strange coincidence is that the three wrong signals all occurred within a 7-month period in the 1972 – 1974 bear market. Based on this re-examination, the latest boring episode took on more interest. However, still further work suggests that our newlydiscovered phenomenon appears to be becoming less useful. It is possible to identify 10 major bear-market bottoms since 1949, the first six of these having occurred through 1970. There was a dull period associated with everyone of those six bottoms. taking place prior to the low in four of those cases and only slightly afterward in the two others. The average gain -for the ..year.following&thesix-signals'was-17 andthe average gain measured from the signal to the end of the subsequent bull market was 59. By contrast no similar signal was associated with the four most recent major bottoms in 1974, 1978, 1982, and 1984. It remains uncertain, therefore, whether this particular piece of wisdom should be heeded in the present instance. It does appear, however, that the rule about not selling a dull market may be a bit more substantial than pure myth. AWTebh Dow Jones Industrials (1200) S & P 500 (1200) Cumulative Index (5/26/88) 1960.35 253.83 3652.44 ANTHONY W. TABELL DELAFIELD, HARVEY, TABELL INC. No statement or expression 01 oplf'llon or any other matter herein contained Is, or IS to be deemed to be, directly or Indirectly, an offer orlhe solicitation of an offer to buy or sell any security relerred to or menlloned The matter IS presented merely for the convef'llence ollhe subscriber White we beheve the sources of our information to be rehable, we In no way represent or guarantee the accuracy thereof nor of the statements made herein Any achon to be taken by the subsCriber should be based on hts own Investigation and mformatlon Delafield, Harvey, Tabel! Inc, as a corporation and Its officers or employees. may now have, or may later take, positions or trades tn respect to any securTltes mentioned In thl or any future ISUe, and such position may be different from any views now or hereafter expressed In thiS or any other Issue Delafield, Harvey, Tabellinc , which IS registered With the SEC as an Investment adVisor, may give adVICe to Its Investment adVISOry and other cuS10mers Independently of any statements made In thiS or In any other Issue Further Information on any secUrity menllOned herein IS available on request '.,11. I',. .l I.