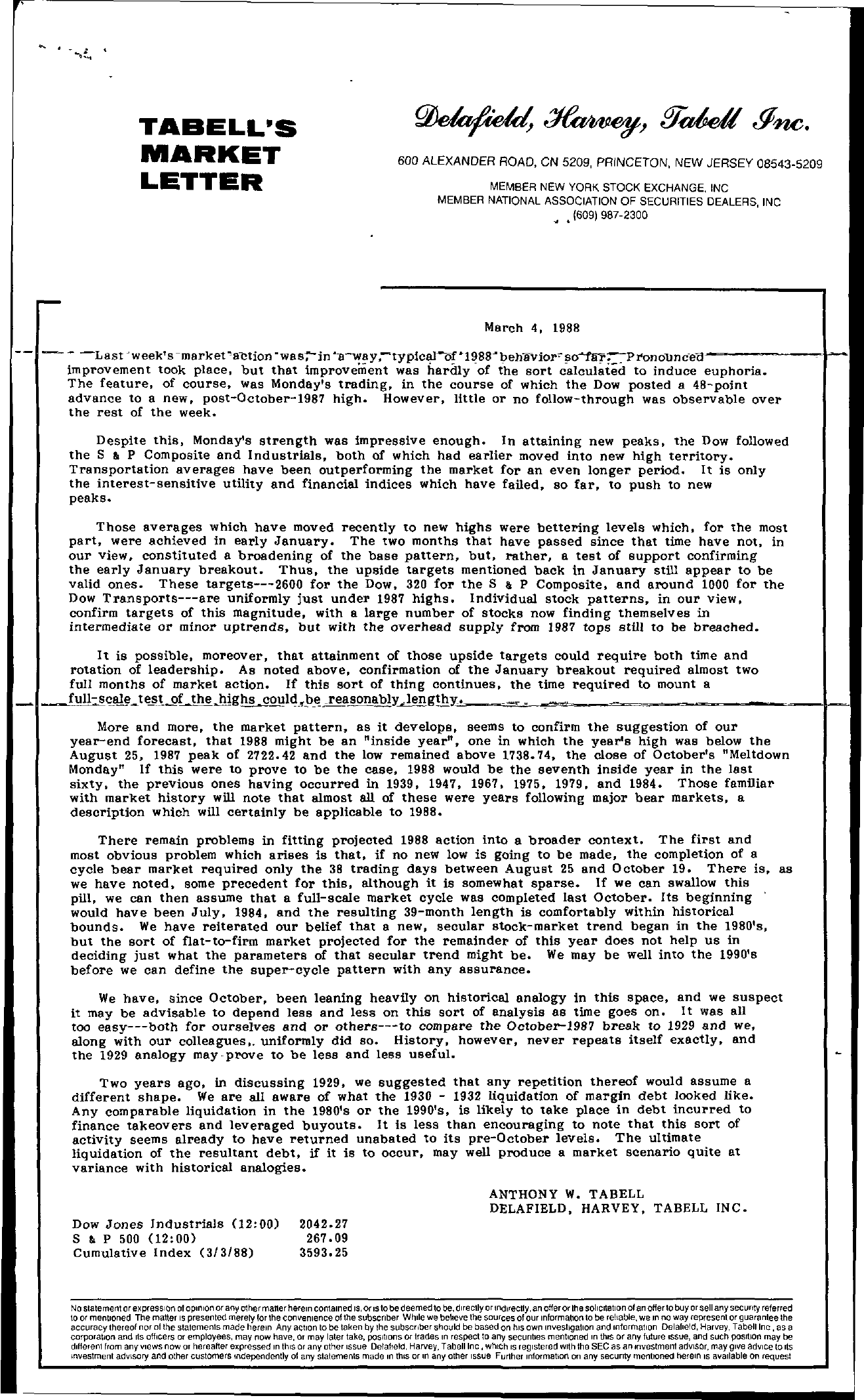 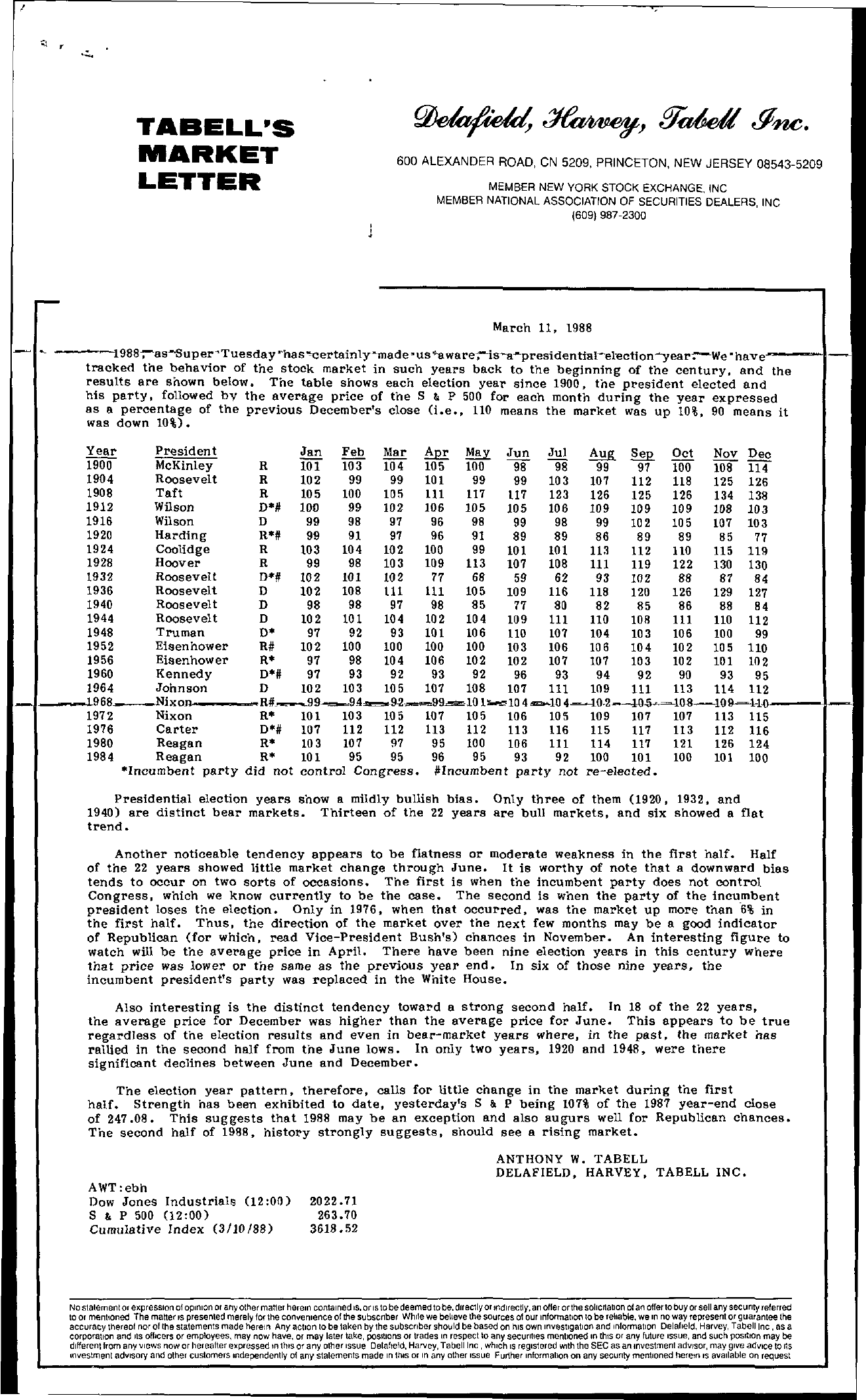 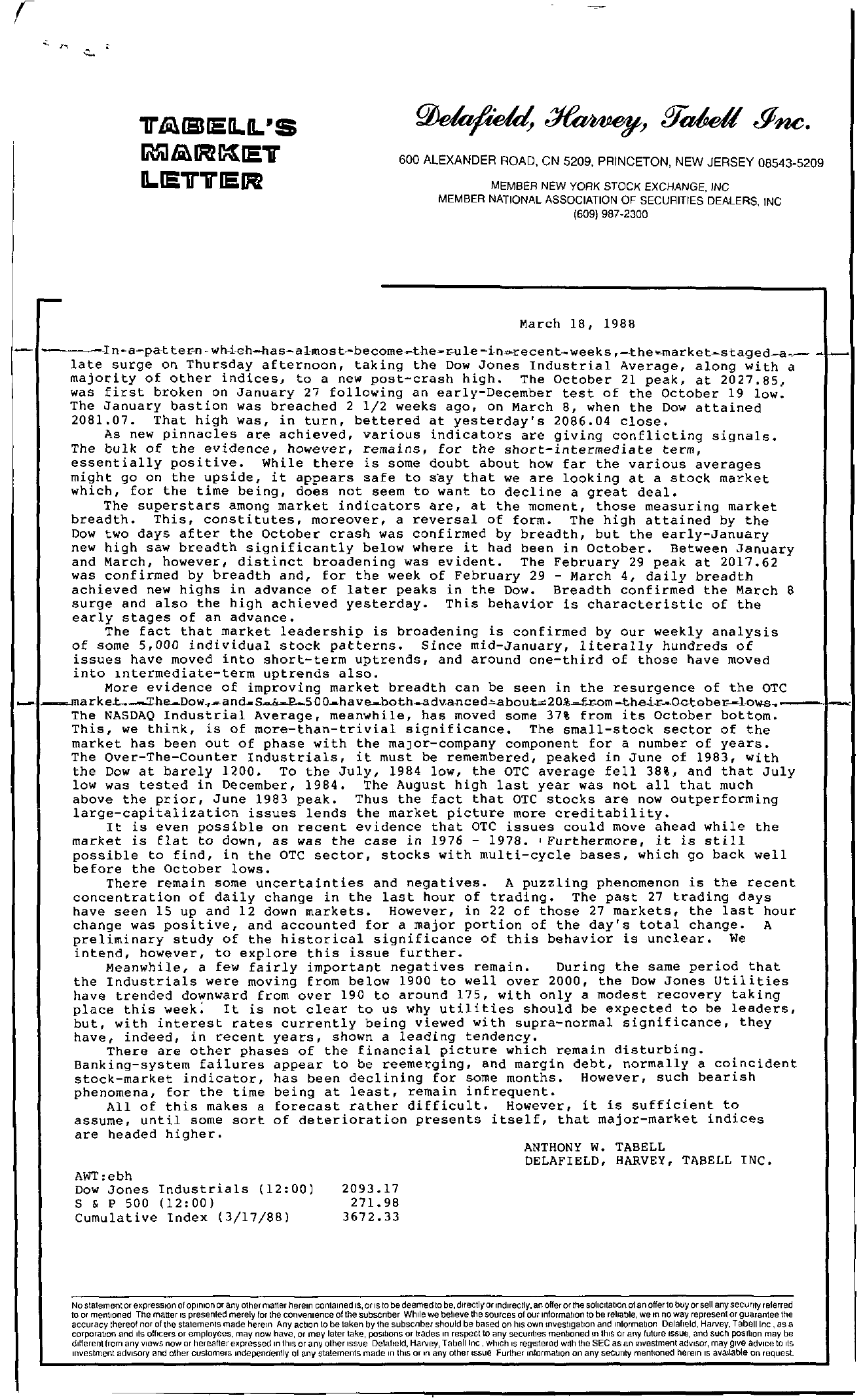 r '11'lii.\BUEn..n..' s 1il1lJlii.\ Ii,m rEV LrEYYIER 600 ALEXANDER ROAD, CN 5209, PRINCETON, NEW JERSEY 08543-5209 MEMBER NEW YORK STOCK EXCHANGE, INC MEMBER NATIONAL ASSOCIATION OF SECURITIES DEALERS, INC (609) 987-2300 March 18, 1988 ——-….–1 n .. a-pa-t te n – wh-i-Gh-has- a l-mos t-…becomether.-u I.e -i-n–rece nt…. weeks, -t he ..-marke t—s taged-a …- -t–I late surge on Thursday afternoon, taking the Dow Jones Industrial Average, along with a majority of other indices, to a new post-crash high. The October 21 peak, at 2027.85, was first broken on January 27 following an early-December test of the October 19 low. The January bastion was breached 2 1/2 weeks ago, on March 8, when the Dow attained 2081.07. That high was, in turn, bettered at yesterday's 2086.04 close. As new pinnacles are achieved, various indicators are giving conflicting signals. The bulk of the evidence, however, remains, for the short-intermediate term, essentially positive. While there is some doubt about how far the various averages might go on the upside, it appears safe to s'ay that we are looking at a stock market which, for the time being, does not seem to want to decline a great deal. The superstars among market indicators are, at the moment, those measuring market breadth. This, constitutes, moreover, a reversal of form. The high attained by the Dow two days after the October crash was confirmed by breadth, but the early-January new high saw breadth significantly below where it had been in October. Between January and March, however, distinct broadening was evident. The February 29 peak at 2017.62 was confirmed by breadth and, for the week of February 29 – March 4, daily breadth achieved new highs in advance of later peaks in the Dow. Breadth confirmed the March 8 surge and also the high achieved yesterday. This behavior is characteristic of the early stages of an advance. The fact that market leadership is broadening is confirmed by Our weekly analysis of some 5,000 individual stock patterns. Since mid-January, literally hundreds of issues have moved into short-term uptrends, and around one-third of those have moved into intermediate-term uptrends also. More evidence of improving market breadth can be seen in the resurgence of the OTe -.marke.t…–1'heDow.,andS&….E-500have-both-adv.a.ncedbout'20.f.l-.om-the-i-r-October–l.ows,—t-I The NASDAQ Industrial Average, meanwhile, has moved some 37 from its October bottom. This, we think, is of more-than-trivial significance. The small-stock sector of the market has been out of phase with the maJor-company component for a number of years. The Over-The-Counter Industrials, it must be remembered, peaked in June of 1983, with the Dow at barely 1200. To the July, 1984 low, the OTC average fell 38, and that July low was tested in December, 1984. The August high last year was not all that much above the prior, June 1983 peak. Thus the fact that OTC stocks are now outperforming large-capitalization issues lends the market picture more creditability. It is even possible on recent evidence that OTC issues could move ahead while the market is flat to down, as was the case in 1976 – 1978. 'Furthermore, it is still possible to find, in the OTe sector, stocks with mUlti-cycle bases, which go back well before the October lows. There remain some uncertainties and negatives. A puzzling phenomenon is the recent concentration of daily change in the last hour of trading. The past 27 trading days have seen 15 up and 12 down markets. However, in 22 of those 27 markets, the last hour change was positive, and accounted for a major portion of the day's total change. A preliminary study of the historical significance of this behavior is unclear. We intend, however, to explore this issue further. Meanwhile, a few fairly important negatives remain. During the same period that the Industrials were moving from below 1900 to well over 2000, the Dow Jones utilities have trended downward from over 190 to around 175, with only a modest recovery taking place this week It is not clear to us why utilities should be expected to be leaders, but, with interest rates currently being viewed with supra-normal significance, they have, indeed, in recent years, shown a leading tendency. There are other phases of the financial picture which remain disturbing. Banking-system failures appear to be reemerging, and margin debt, normally a coincident stock-market indicator, has been declining for some months. However, such bearish phenomena, for the time being at least, remain infrequent. All of this makes a forecast rather difficult. However, it is sufficient to assume, until some sort of deterioration presents itself, that major-market indices are headed higher. ANTHONY W. TABELL DELAFIELD, HARVEY, TABELL INC. AWTebh Dow Jones Industrials (1200) 2093.17 S & P 500 (1200) Cumulative Index (3/17/88) 271.98 3672.33 No statement or expression of opInion or any other ma11er herein contained IS, or IS to be deemed to be, directly or Indirectly, an offer or the soliCitation of an offerlc buy or sell any security referred to or mentioned The matter IS presented merely for Ihe convemence of the subscnber While we believe the sources of our Information to be reliable, we In no way represent or guarantee the accuracy thereof nor of the statements made herein Any action 10 be taken by the subscnber should be based on his own mvestlgallOn and information Delafield, Harvey, Tabelllnc, as a corporation and Its officers or employees, may now have, or may later take, POSItionS or trades In respect to any securrtJes men\loned In thiS Or any future ISSue, and such poSition may be different from any views now or hereafter eKpressed In thiS or any other Issue Delalleld, Harvey, Tabellinc , which IS registered with the SEC as an Investment adVisor, may give adVice to Its Investment adVISOry and other customers Independently 01 any statements made In thiS or In any other Issue Further Information on any secUTIty menlloned herein IS available on request 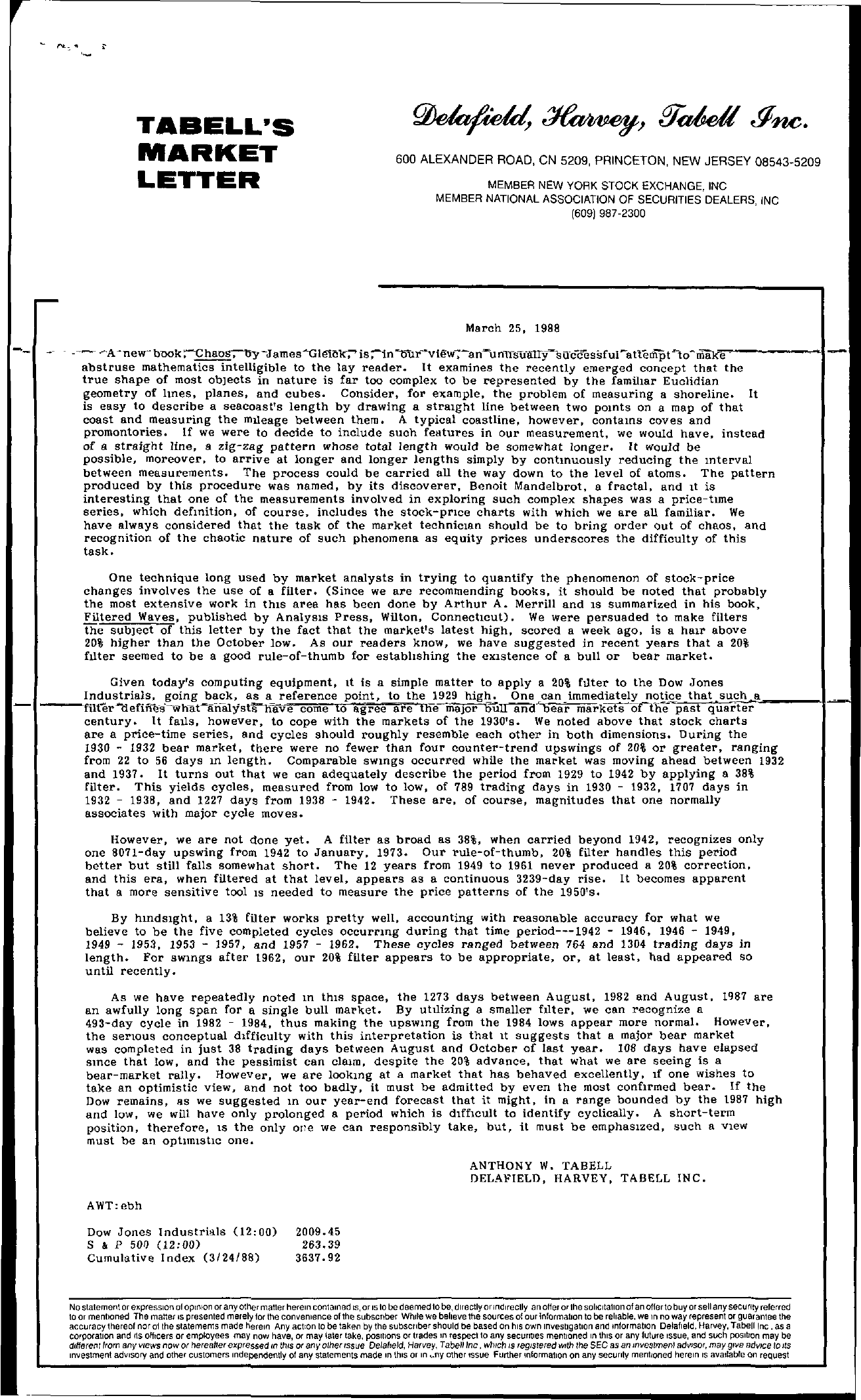 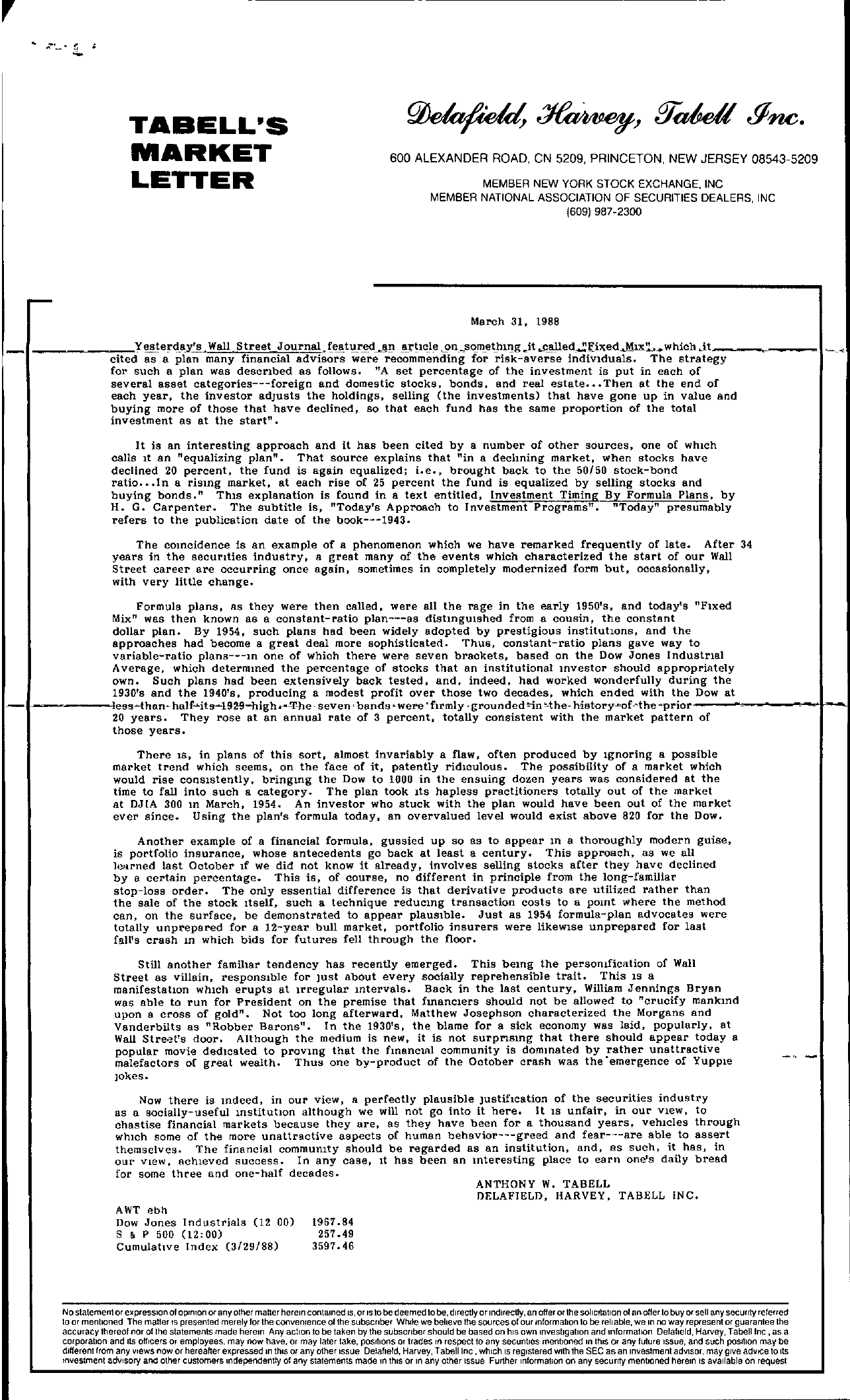