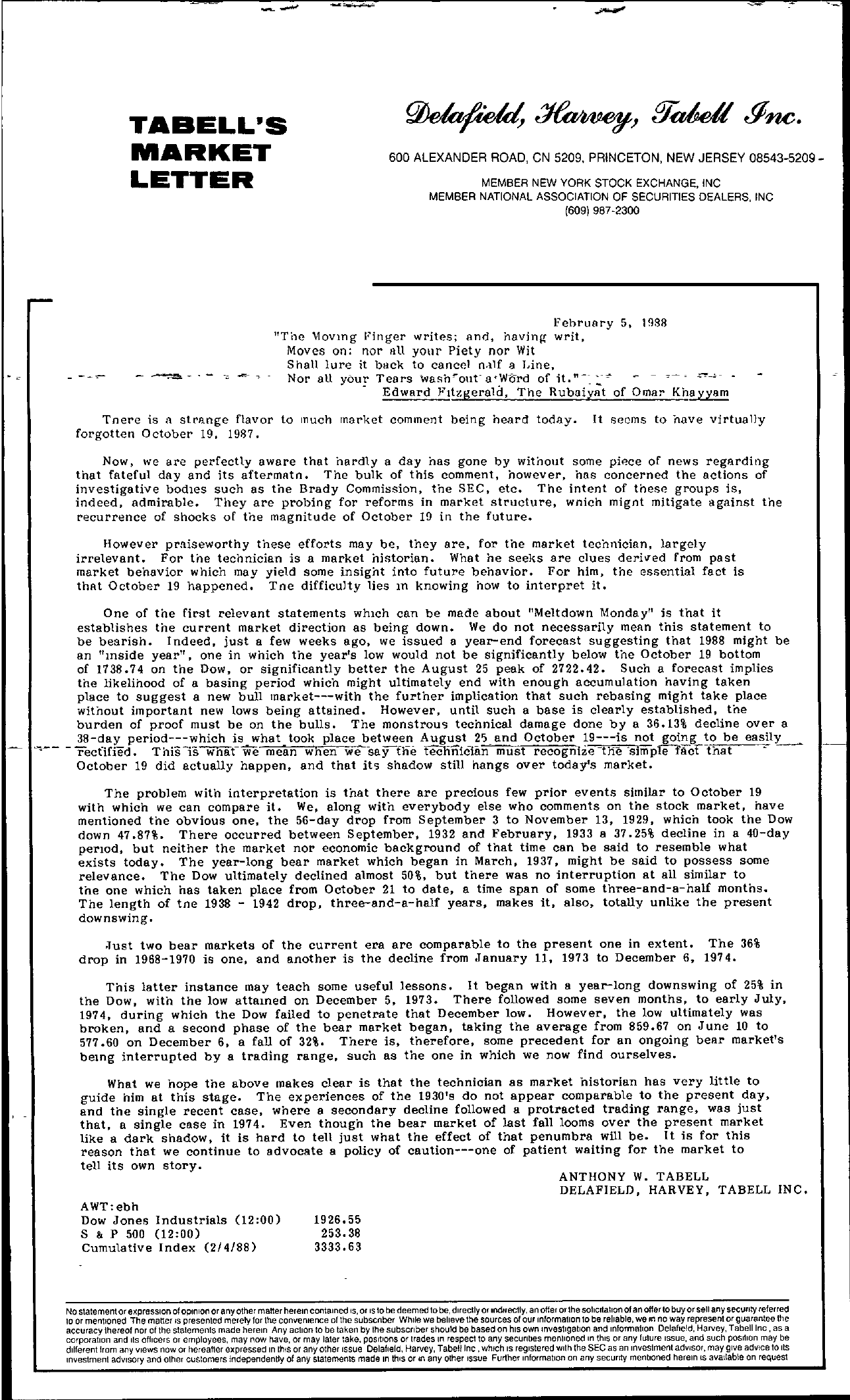 — TABELL'S MARKET LETTER 600 ALEXANDER ROAD, CN 5209, PRINCETON, NEW JERSEY 08543-5209- MEMBER NEW YORK STOCK EXCHANGE, INC MEMBER NATIONAL ASSOCIATION OF SECURITIES DEALERS, INC (609) 987,2300 February 5. 1988 liThe vtovmg Finger writes; and. having writ. Moves on nor aU your Piety nor Wit Shall lure it back to cancel n,llf a Line, Nor aU you!' Tears w8!lh!'0l1t aWord of it.– .– – — 0 —- Edward FItzgerald, The Rubaiy';-t of Omar Kh Tnere is 1 strange flavor to much market comment being heard today It seems to nave virtually forgotten October 19. 1987. Now, we are perfectly aware that hardly a day has gone by without some piece of news regarding that fateful day and its aftermatn. The bulk of this comment, however. has concerned the actions of investigative bodles such 85 the Brady Commission, the SEC, etc. The intent of these groups is. indeed, admirable. They are probing for reforms in market structure, wnich migot mitigate against the recurrence of shocks of the magnitude of October 19 in the future. However prfliseworthy these efforts may be, they are, for the market technician, largely irrelevant. For the technician is a market historian. What he seeks are clues derilTed from past market behavior which may yield some insight into future behavior. For him, the essential fact is thAt October 19 happened. Toe difficulty lies In knowing how to interpret it. One of the first relevant statements WhICh can be made about Meltdown Monday is that it establishes the current market direction as being down. We do not necessarily mean this statement to be bearish. Indeed, just a few weeks ago, we issued a year-end forecast suggesting that 1988 might be an Inside yeaI'll. one in which the year's low would not be significantly below the October 19 bottom of 1738.74 on the Dow. or significantly better the August 25 peak of 2722.42. Such a forecast implies the likelihood of a basing period which might ultimately end with enough accumulation having taken place to suggest a new bull market—with the further implication that such rebasing might take place without important new lows being attained. However, until such a base is clearly established. the burden of proof must be on the bulls. The monstrouc;; technical damage done by a 36.13 decline over a 3S-day period—which is what took place between August 25and October 19—is not going to be easily – recfified. Thisis wnat–we mean when we sayfne tecnnician must recognize -tne -simpre-facflhat – — October 19 did actually happen, and that ite; shadow still hangs over today's market. 1- The problem with interpretation is that there are precious few prior events similar to October 19 with which we can compare it. We, along with everybody else who comments on the stock market, have mentioned the obvious one, the 56-day drop from September 3 to November 13, 1929. which took the Dow down 47.87. There occurred between September. 1932 and February. 1933 a 37.25 decline in a 40-day perIod, but neither the market nor economic background of that time can be said to resemble what exists today. The year-long bear market which began in March, 1937. might be said to possess some relevance. The Dow ultimately declined almost 50. but there was no interruption at all similar to tne one which has taken place from October 21 to date a time span of some three-and-a-half months. The length of tne 1938 – 1942 drop, three-and-a-half years, makes it, also, totally unlike the present downswing .1ust two bear markets of the current era are comparable to the present one in extent. The 36 drop in 1968-1970 is one. and anotber is the decline from January 11. 1973 to December 6. 1974. This latter instance may teach some useful lessons. It began with a year-long downswing of 25 in the Dow, with the low attaIned on December 5. 1973. There followed some seven months, to early July, 1974. during which the Dow failed to penetrate that December low. However. the low ultimately was broken, and a second phase of the bear market began, taking the average from 859.67 on June 10 to 577.60 on December 6, a fall of 32. There is. therefore, some precedent for an ongoing bear market's beIng interrupted by a trading range. such as the one in which we now find ourselves. What we hope the above makes clear is that the technician as market historian has very little to guide him at this stage. The experiences of the 1930's do not appear comparable to the present day, and the single recent case, where a secondary decline followed a protracted trading range, was just that. a single case in 1974. Even though the bear market of last fall looms over the present market like a dark shadow, it is hard to tell just what the effect of that penumbra will be. It is for this reason that we continue to advocate a policy of caution—one of patient waiting for the market to tell its own story. ANTHONY W. TABELL DELAFIELD, HARVEY, TABELL INC. AWTebh Dow Jones Industrials (1200) S & P 500 (1200) Cumulative Index (2/4/88) 1926.55 253.38 3333.63 No statement or expression of opInion or any other matter herein contained IS, or IS to be deemed to be, directly or Indirectly, an offer or Ihe sollcrtatlon of an offer 10 buy or sell any security referred to or menllOned The matter IS presented merely for the convenience of Ihe subscnber While we believe the sources of our Informallon to be reliable, we In no way represent or guarantee the accuracy thereof nor althe statements made herein Any action to be taken by the subSCriber should be based on hiS own investigation and Informabon Delafteld, Harvey, Tabelllnc, as a corporation and ItS officers or employees, may now have, or may later take, pOSitions or trades In respect to any secUrities mentioned In thiS or any future Issue, and such poSition may be different Irom any views now or hereafter expressed In thiS or any other Issue Delafield, Harvey, TabeU Inc, which IS registered With the SEC as an Investment adVisor, may give adVice to Its Investment adVISOry and other customers Independently of any statements made In thiS or In any other Issue Further information on any security mentioned herein IS available on request