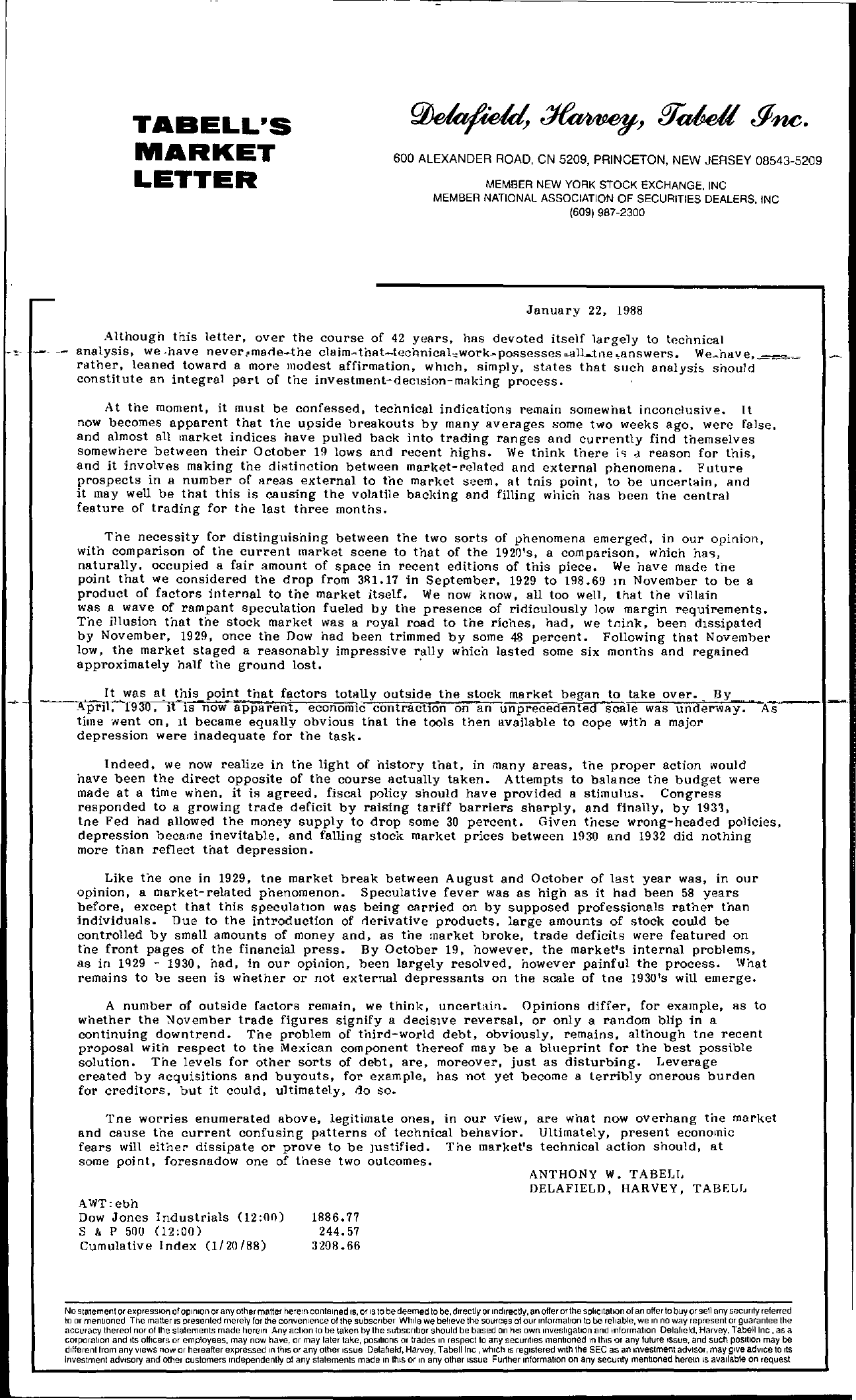 TABELL'S MARKET LETTER 600 ALEXANDER ROAD, CN 5209, PRINCETON, NEW JERSEY 08543-5209 MEMBER NEW YORK STOCK EXCHANGE, INC MEMBER NATIONAL ASSOCIATION OF SECURITIES DEALERS, INC (6091987-2300 January 22, 1988 A.1thougil this letter, over the course of 42 years. has devoted itself largely to technical -'!- analysis, we -have never marle–th-e claim.. that-.technicRl-work-po.c;sesses ….aUtne .,answers. Wehay e. ather, leaned toward a more modest affirmation, WhICh. simply, states that sHch 8nalysb shouJd constitute an integral part of the investment-decIsion-making process. At the moment, it must be confessed, technical indications remain somewhat inconclusive. It now becomes apparent that tile upside breakouts by many averages some two weeks ago. were ralse. and Rlmost all market indices have pulled back into trading ranges and currently find themselves somewhCIe between their October 19 lows and recent highs. We think there ic;; d reason for this, and it involves making the diHtinction between market-related and external phenomena. Future prospects in a number of areas external to the market seem, at tnis point, to be uncp.rtain, and it may well be that this is causing the volatile backing and filling which has been the centra) feature of trading for the last three months. The necessity for distinguishing between the two sorts of phenomena emerged, in our oplnJon, with comparison of the current market scene to that of the 1920's, a comparison, which hac;;, naturally, occupied a fair amount of space in recent editions of this piece. We have made the point that we considered the drop from 3RL17 in September, 1929 to 198.69 m November to be 8 product of factors internal to the market itself. We now know. all too well. that the villain was a wave of rampant speculation fueled by the presence of ridiculously low margin requirements. The illusion that the stock market was a royal road to the riches, had, we tnink. been dlssipateil by November, 1929, once the Dow had been trimmed by some 4B percent. Following that November low, the market staged a reasonably impressive rally whicn lasted some six months and regained approximately half the ground lost. ' –Arpr';iIlt;-wr9a3s0 at this point that factors totally outside the stock market began -It is now apparent, economic contraction on an unprecedented to take over. By scale was undEfrway. time went on. It became equally obvious that the tools then available to cope with a major depression were inadequate for tile task. As Indeed. we now realize in the light of history that, in many areas, the proper action would have been the direct opposite of the course actually taken. Attempts to balance the budget were made at a time when, it is agreed. fiscal policy should have provided a stimulus. Congress responded to a growing trade deficit by raising tariff barriers sharply, and finally, by 1931, tne Fed had allowed the money supply to drop some 30 percent. Given these wrong-headed policies, depression became inevitable. and falling stock market prices between 1930 and 1932 did nothing more than reflect that depression. Like the one in 1929, tne market break between August and October of last year was, in our opinion, a market-related phenomenon. Speculative fever was as high as it had been 58 years before. except that this speculatIon was being carried on by supposed professionals rather than individuals. Due to the introduction of rl.erivative products. large amounts of stock could be controlled by small amounts of money and, as the market broke, trade deficits were featured on the front pages of the financial press. By October 19, however, the market's internal problems, as in 1q29 – 1930. had, in our OpiJlion, been largely resolved, however painful the process. What remains to be seen is whether or not external depressants on the scale of toe 1930's will emerge. A number of outside factors remain. we think, uncertain. Opinions differ, for example, as to whether the ovember trade figures signify a deciSIve reversal, or only a random blip in a continuing downtrend. The problem of third-world debt, obviously. remains. although tne recent proposal witil respect to the Mexican component thereof may be a blueprint for the best possible solution. The levels for other sorts of debt, are, moreover, just as disturbing. Leverage created by acquisitions and buyouts, for example, has not yet become a terribly onerous burden for creditors. but it could, ultimately, do so. Tne worries enumerated above, legitimate ones, in our View, are what now overhang tne market and cause the current confusing patterns of technical behavior. Ultimately. present economic fears will eitiler dissipate or prove to be Justified. The market's technical action should, at some point. foresnudow one of these two outcomes. ANTHONY W. TABELL DELAFIELD, HARVEY, TABELf, AWTebh Dow Jones Industrials 0200) 1886.77 S & P 500 0200) 244.57 Cumulative Index (1/20/88) 3208.66 No statement or epresslon of opinion or any other matter herein contained IS, or IS to be deemed to be, directly or indirectly, an offer orthe soliCitation of an offer to buy or sell any security referred to or mentioned The matter IS presented merely for the convemence of the subSCriber While we believe Ihe sources of our information to be reliable, we In no way represent or guarantee the aCCuracy thereof nOf of the statements made herein Any action to be taken by the subscriber should be based on hiS own Investigation and InformallOn Delafield, Harvey, Tabelllnc, as a corporation and Its officers or employees, may now have, or may later take, positions or trades In respect to any seCUrities mentioned In thiS or any future Issue, and such position may be different from any views now or hereafter expressed In thiS or any other Issue Delafield, Harvey, Tabelllnc, which IS registered WIth the SEC as an Investment adVISor, may give adVice to liS Investment adVISOry and other customers Independently of any statements made In thiS or In any other Issue Further Informa\lon on any securtty menlloned herem IS available on request