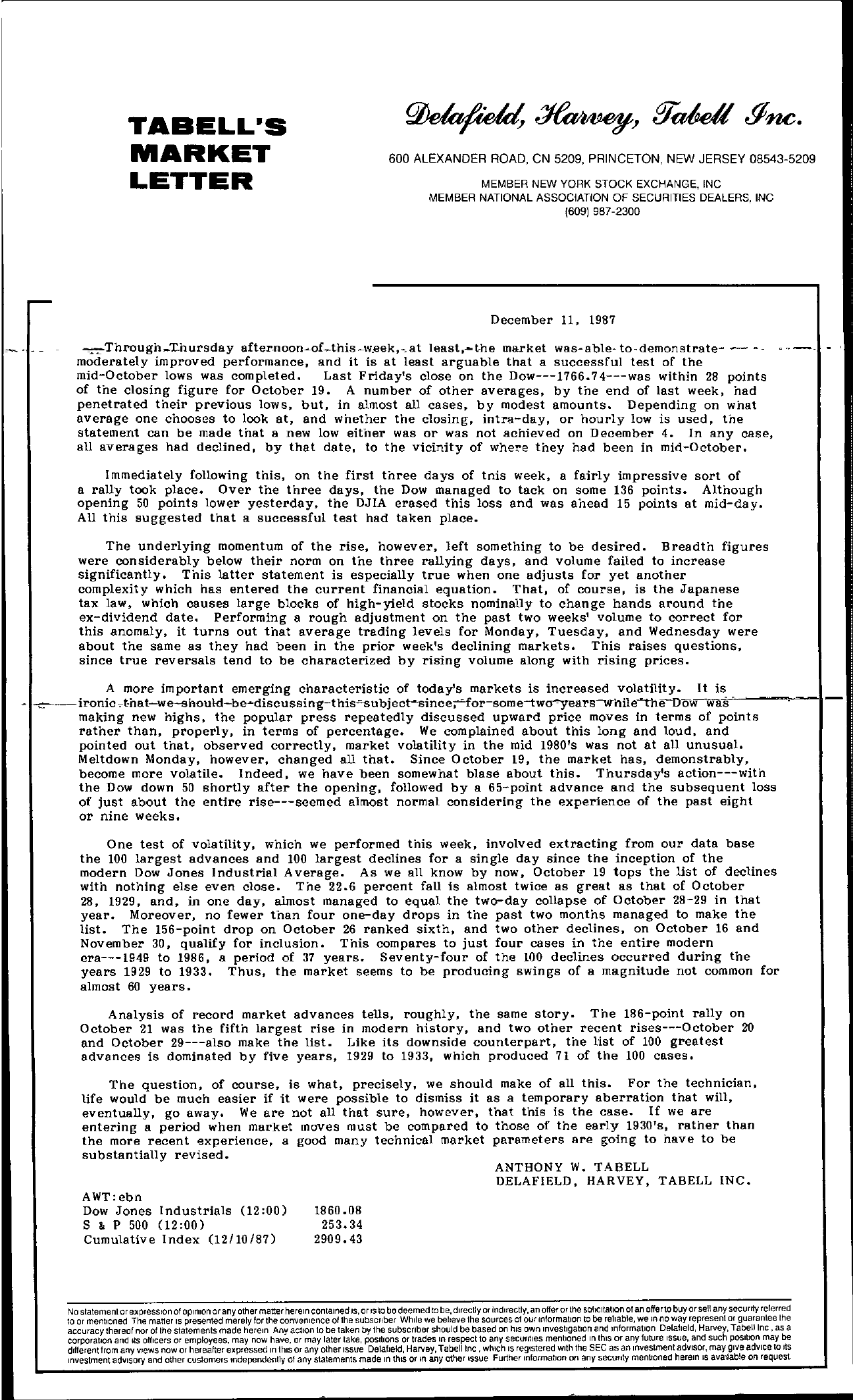 TABELL-S MARKET LETTER 600 ALEXANDER ROAD, CN 5209, PRINCETON, NEW JERSEY 08543-5209 MEMBER NEW YORK STOCK EXCHANGE, INC MEMBER NATIONAL ASSOCIATION OF SECURITIES DEALERS, INC (6091 987-2300 December 11, 1987 ThroughT..hursday 8fternoon—ofthisweek. at least.–t-he market was-able to-demonstrate – -mOderately improved performance. and it is at least arguable that a successful test of the mid-October lows was completed, Last Friday's close on the Dow—1766.74—was within 28 points of tile closing figure for October 19. A number of other averages, by the end of last week, had penetrated their previous lows, but. in almost all cases, by modest amounts. Depending on what average one chooses to look at, and whether the closing. intra-day, or hourly low is used, the statement can be made that a new low either was or was not achieved on December 4. In any case, all averages had declined, by that date, to the Vicinity of where they had been in mid-October. Immediately following this, on the first three days of tnis week, a fairly impressive sort of a rally took place. Over the three days, the Dow managed to tack on some 136 points. Although opening 50 points lower yesterday, the DJIA erased this loss and was ahead 15 points at mid-day. All this suggested that a successful test had taken place. The underlying momentum of the rise, however, left something to be desired. Breadth figures were considerably below their norm on the three rallying days, and volume failed to increase significantly. This latter statement is especially true when one adjusts for yet another complexity which has entered the current financial equation. That, of course, is the Japanese tax Jaw, which causes large blocks of high-yield stocks nominally to change hands around the ex-dividend date. Performing a rough adjustment on the past two weeks' volume to correct for this anomaly, it turns out that average trading levels for Monday, Tuesday, and Wednesday were about the same as they had been in the prior week's declining markets. This raises questions, since true reversals tend to be characterized by rising volume along with rising prices. A more important emerging characteristic of teday's markets is increased volatility. It is —–ironic that-we–shoul-d-bediscussing-thissubject-'sincej'for-some–twoars–whileheDowwa,;s,;—–1 making new highs, the popular press repeatedly discussed upward price moves in terms of points rather than, properly, in terms of percentage. We complained about this long and loud, and pointed out that, observed correctly, market volatility in the mid 1980's was not at all unusual. Meltdown Monday, however, changed all that. Since October 19, the market has, demonstrably become more volatile. Indeed. we have been somewhat blase about this. Thursday's action—with the Dow down 50 shortly after the opening, followed by a 65-point advance and the subsequent loss of just about the entire rise—seemed almost normal considering the experience of the past eight or nine weeks. One test of volatility, which we performed this week, involved extracting from our data base the 100 largest advances and 100 largest declines for a single day since the inception of the modern Dow Jones Industrial Average. As we all know by now, October 19 tops the list of declines with nothing else even close. The 22.6 percent fall is almost twice as great as that of October 28, 1929, and, in one day, almost managed to equal the two-day collapse of October 28-29 in that year. Moreover. no fewer than four one-day drops in the past two months managed to make the list. The 156-point drop on October 26 ranked sixth, and two other declines, on October 16 and November 30, qualify for inclusion. This compares to just four cases in the entire modern era—1949 to 1986, a period of 37 years, Seventy-four of the 100 declines occurred during the years 1929 to 1933. Thus, the market seems to be producing swings of a magnitude not common for almost 60 years. Analysis of record market advances tells, roughly. the same story. The 186-point rally on October 21 was the fifth largest rise in modern history, and two other recent rises—October 20 and October 29—a1so make the list. Like its downside counterpart, the list of 100 greatest advances is dominated by five years, 1929 to 1933, which produced 71 of the 100 cases. The question, of course, is what, precisely, we should make of all this. For the technician, life would be much easier if it were possible to dismiss it as a temporary aberration that will, eventually, go away. We are not all that sure, however, that this is the case. If we are entering a period when market moves must be compared to those of the early 1930's, rather than the more recent experience, a good many technical market parameters are going to have to be substantially revised. ANTHONY W. TABELL DELAFIELD, HARVEY, TAB ELL INC. AWTebn Dow Jones Industrials (1200) 1860.08 S & P 500 (1200) 253.34 Cumulative Index (12/10/87) 2909.43 No statement or expression of opinion or any other matter herein contained IS, or IS to be deemed to be, directly or Indirectly, an offer or the sohcltatlon of an offerto buy or sell any security referred to or mentioned The matter IS presented merely for the convenience at the subsCriber While we believe the sources of our information to be rehable, we In no way represent or guarantee the accuracythereo! nor of the statements made herein Any action 10 be taken by the subSCriber should be based on hiS own Investigation and mformaliOn Delafield, Harvey, Tabel! Inc, as a corporatIOn and Its officers or employees, may now have, or may later take, posrtlons or trades In respect to any secuntles mentioned In thiS or any future Issue, and such pOSlbon may be different from any views now or hereafter expressed In thiS or any other Issue Delafield, Harvey, Tabellinc ,which IS registered With the SEC as an Investment adVisor, may give adVice to Its Investment adVISOry and other customers Independently of any statements made In thIS or In any other Issue Further InformabOn on any secunty mentioned herein IS available on request