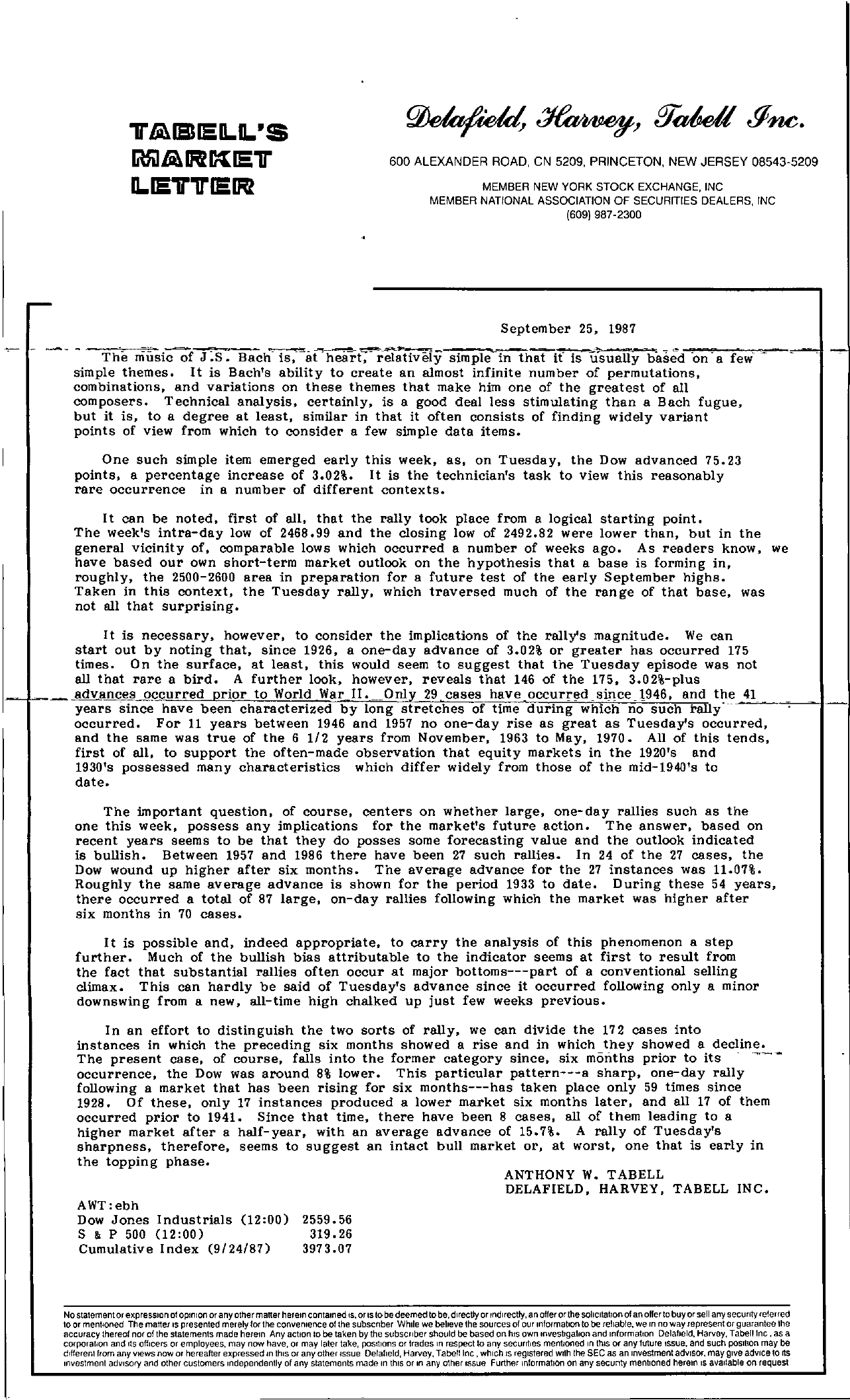 III.ii.\1mIED..D..' S Ia1lII.ii.\iii IEII D..1EIIVIEIiI 600 ALEXANDER ROAD, CN 5209, PRINCETON, NEW JERSEY 08543-5209 MEMBER NEW YORK STOCK EXCHANGE, INC MEMBER NATIONAL ASSOCIATION OF SECURITIES DEALERS, INC (609) 987-2300 September 25, 1987 The rrisi JS. Bachatlif;'!'rr;tively simple—hi th-aTif is ti'sually based -on a few- simple themes. It is Bach's ability to create an almost infinite number of permutations, combinations, and variations on these themes that make him one of the greatest of all composers. Technical analysis, certainly, is a good deal less stimulating than a Bach fugue, but it is, to a degree at least, similar in that it often consists of finding widely variant points of view from which to consider a few simple data items. One such simple item emerged early this week, as, on Tuesday, the Dow advanced 75.23 points, a percentage increase of 3.02. It is the technician's task to view this reasonably rare occurrence in a number of different contexts. It can be noted, first of all, that the rally took place from a logical starting point. The week's intra-day low of 2468.99 and the closing low of 2492.82 were lower than, but in the general vicinity of, comparable lows which occurred a number of weeks ago. As readers know, we have based our own short-term market outlook on the hypothesis that a base is forming in, roughly, the 2500-2600 area in preparation for a future test of the early September highs. Taken in this context, the Tuesday rally, which traversed much of the range of that base, was not all that surprising. It is necessary, however, to consider the implications of the rally's magnitude. We can start out by noting that, since 1926, a one-day advance of 3.02 or greater has occurred 175 times. On the surface, at least, this would seem to suggest that the Tuesday episode was not all that rare a bird. A further look, however, reveals that 146 of the 175, 3.02-plus 1- advances-.9pcurred prior to World War II. Only 29 cases have occurred since 1946, and the-41'c—–II years since have been characterized by long stretches of time during which no such rally occurred. For 11 years between 1946 and 1957 no one-day rise as great as Tuesday's occurred, and the same was true of the 6 1/2 years from November, 1963 to May, 1970. All of this tends, first of all, to support the often-made observation that equity markets in the 1920's and 1930's possessed many characteristics which differ widely from those of the mid-1940's to date. The important question, of course, centers on whether large, one-day rallies such as the one this week. possess any implications for the market's future action. The answer, based on recent years seems to be that they do posses some forecasting value and the outlook indicated is bullish. Between 1957 and 1986 there have been 27 such rallies. In 24 of the 27 cases, the Dow wound up higher after six months. The average advance for the 27 instances was 11.07. Roughly the same average advance is shown for the period 1933 to date. During these 54 years, there occurred a total of 87 large, on-day rallies following which the market was higher after six months in 70 cases. It is possible and, indeed appropriate, to carry the analysis of this phenomenon a step further. Much of the bullish bias attributable to the indicator seems at first to result from the fact that SUbstantial rallies often occur at major bottoms—part of a conventional selling climax. This can hardly be said of Tuesday's advance since it occurred following only a minor downswing from a new, all-time high chalked up just few weeks previous. In an effort to distinguish the two sorts of rally, we can divide the 172 cases into instances in which the preceding six months showed a rise and in which they showed a decline. The present case, of course, falls into the former category since. six months prior to its occurrence, the Dow was around 8 lower. This particular pattern—a sharp, one-day rally following a market that has been rising for six months— has taken place only 59 times since 1928. Of these, only 17 instances produced a lower market six months later, and all 17 of them occurred prior to 1941. Since that time, there have been 8 cases, all of them leading to a higher market after a half-year, with an average advance of 15.7. A rally of Tuesday's sharpness, therefore, seems to suggest an intact bull market or, at worst, one that is early in the topping phase. ANTHONY W. TAB ELL DELAFIELD, HARVEY, TABELL INC. AWTebh Dow Jones Industrials (1200) 2559.56 S & P 500 (1200) 319.26 Cumulative Index (9/24/87) 3973.07 No statement or expression of opInion or any other matter herein contained IS, Of IS to be deemed to be, directly or Indirectly, an offer or the soliCitation of an offer 10 buy or sell any securrty referred 10 or mentioned The matter IS presented merely lor the convenience of the subsCriber While we believe the sources of our Information to be rehable, we In no way represent or guarantee the accuracy thereof nor of the statements made herem Any actIOn to be taken by the subscriber should be based on hiS own tnvesbgallon and Intormatlon Delafield, Harvey, Tabell Inc, as a corporation and Its officers or employees. may now have, or may later take, poSitions or trades In respect to any securrtl8S mentioned In thiS or any future Issue, and such poSl\!on may be different from any vIews now or hereafter expressed In thiS or any other Issue Delafield, Harvey, Tabe!! Inc, which IS registered wrth the SEC as an Investment adVISor, may give adVice to rts Investment adVISOry and other customers Independenlly of any statements made In thiS or In any other Issue Further mformatlon on any secunty mentioned herein IS available on request