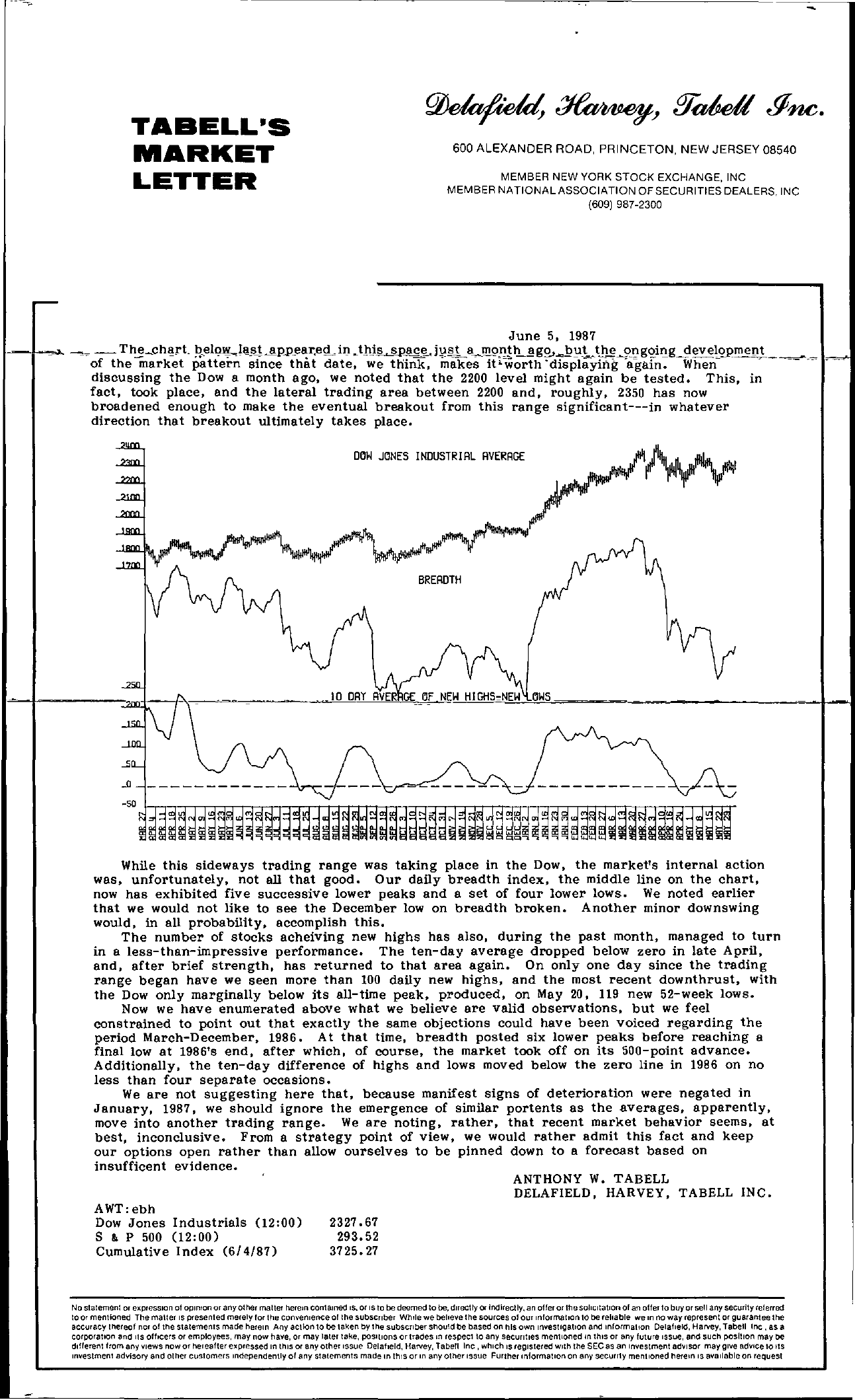 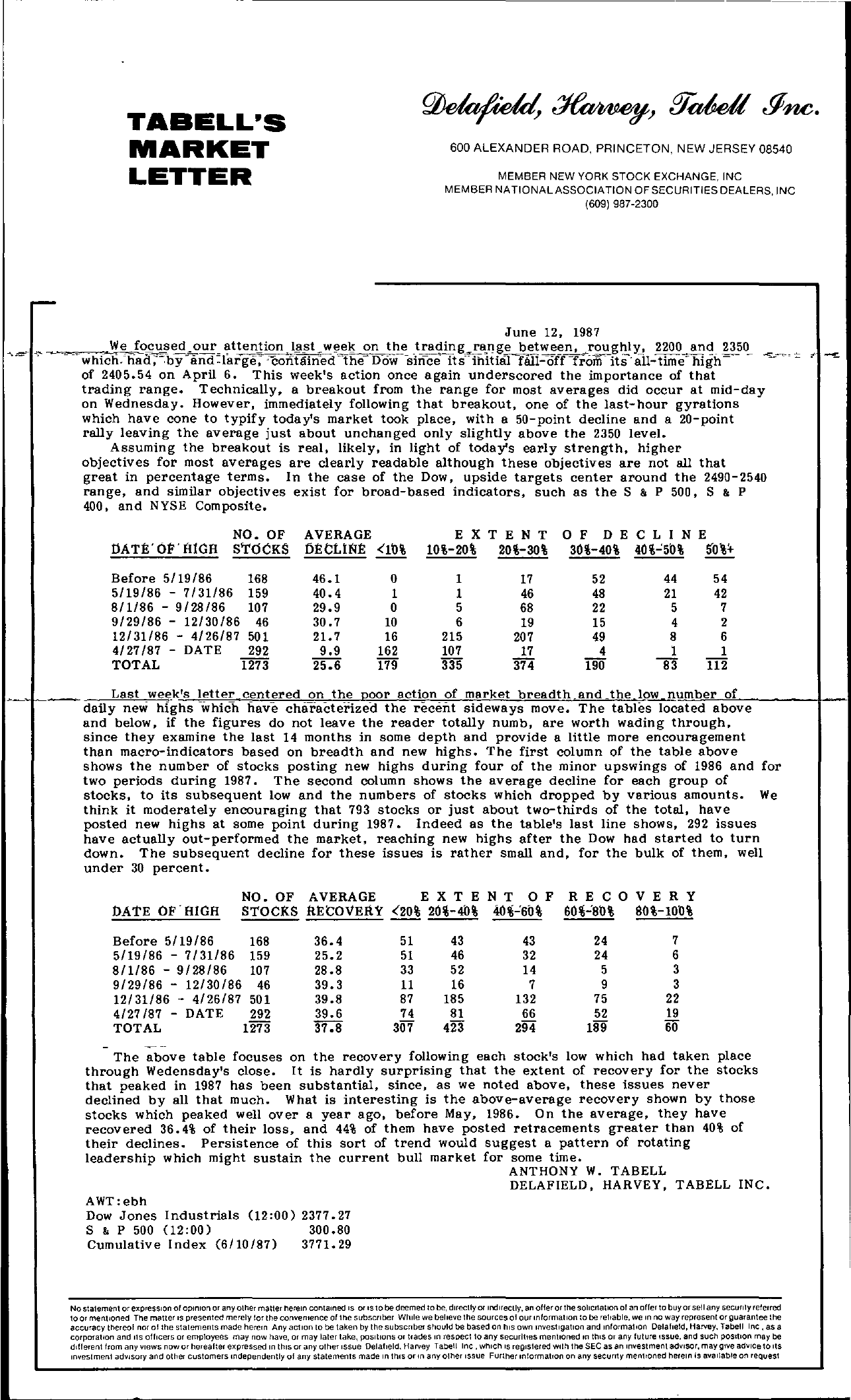 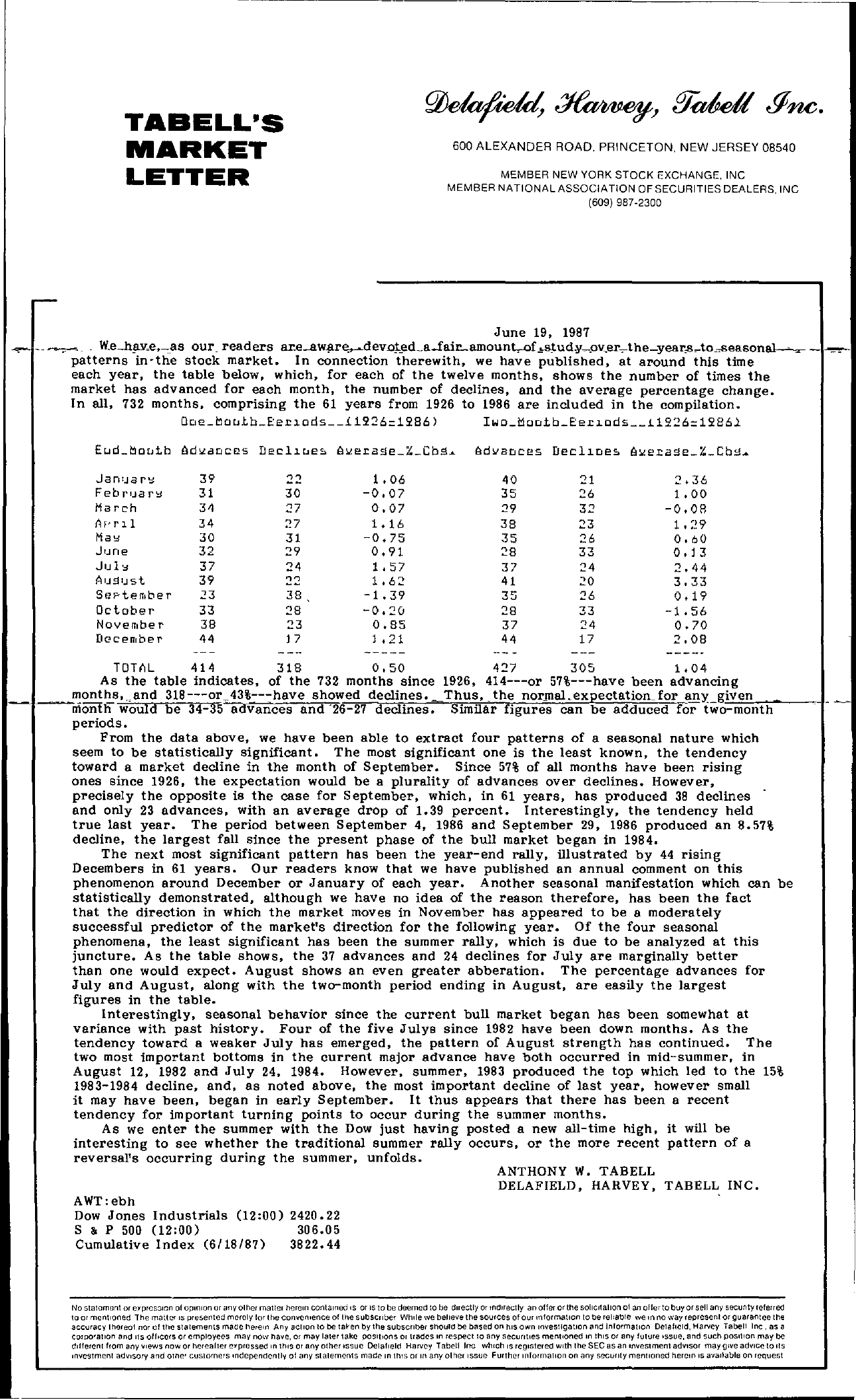 TABELL'S MARKET LETTER 600 ALEXANDER ROAD, PRINCETON, NEW JERSEY 08540 MEMBER NEW YORK STOCK EXCHANGE, INC MEMBER NATIONAL ASSOCIATION OF SECURITIES DEALERS, INC (609) 987-2300 June 19, 1987 W.e-hye. .as our readers ar..e.-awrdevDted.a….fairamount,….of.!-stud.yover–theyears,….to-seasonal— patterns inthe stock market. In connection therewith, we have published, at around this time each year, the table below, which, for each of the twelve months, shows the number of times the market has advanced for each month, the number of declines, and the average percentage change. In all, 732 months, comprising the 61 years from 1926 to 1986 are included in the compilation. Ooebac1be,ad5 i1261286) IwoMaotbe,od5 L12612861 EcdbolJtb ad!.ldClCS DecltJes BeagelCbs edllaoces DeclDe!l. A!.lerasEkCbg …. Jan!.Jar Februar!d March AF'rll Ma June July AIJS1.Jst Sfptelliber October November lecember 39 31 31 34 30 32 37 39 23 33 38 44 22 1.06 30 -0.07 27 0.07 7 1.16 31 -0.75 29 0.91 4 1.57 22 1.62 38 -1. 39 28 -0.20 3 0.85 J 7 1 t 21 40 1 35 26 29 32 38 23 35 26 28 33 37 4 41 20 35 26 28 33 37 4 44 17 2.36 1. 00 -0.08 1 t !9 0.60 O. J 3 .44 3.33 0.19 -1.56 0.70 2.08 TOTL 414 318 0.50 47 305 1.04 As the table indiestes, of the 732 months since 1926, 414—or 57—have been advancing months, and – —month ';;'uld 318—or 43—have showed declines. be 34-35- advances and '26-27 declines. Thus the normal. expectation for 1anygiv,en Similar figures esn be adduced for two-month periods. From the data above, we have been able to extract four patterns of a seasonal nature which seem to be statistically signifiesnt, The most signifiesnt one is the least known, the tendency toward a market decline in the month of September. Since 57 of all months have been rising ones since 1926, the expectation would be a plurality of advances over declines. However, precisely the opposite is the esse for September, which, in 61 years, has produced 38 declines and only 23 advances, with an average drop of 1.39 percent. Interestingly, the tendency held true last year. The period between September 4, 1986 and September 29, 1986 produced an 8.57 decline, the largest fall since the present phase of the bull market began in 1984. The next most signifiesnt pattern has been the year-end rally, illustrated by 44 rising Decembers in 61 years. Our readers know that we have published an annual comment on this phenomenon around December or January of each year. Another seasonal manifestation which esn be statistically demonstrated, although we have no idea of the reason therefore, has been the fact that the direction in which the market mOVes in November has appeared to be a moderately successful predictor of the market's direction for the following year. Of the four seasonal phenomena, the least significant has been the summer rally, which is due to be analyzed at this juncture. As the table shows, the 37 advances and 24 declines for July are marginally better than one would expect. August shows an even greater abberation. The percentage advances for July and August, along with the two-month period ending in August, are easily the largest figures in the table. interestingly, seasonal behavior since the current bull market began has been somewhat at variance with past history. Four of the five Julys since 1982 have been down months. As the tendency toward a weaker July has emerged, the pattern of August strength has continued. The two most important bottoms in the current major advance have both occurred in mid-summer. in August 12, 1982 and July 24, 1984. However, summer, 1983 produced the top which led to the 15 1983-1984 decline, and. as noted above, the most important decline of last year, however small it may have been, began in early September. It thus appears that there has been a recent tendency for important turning points to occur during the summer months. As we enter the summer with the Dow just having posted a newall-time high, it will be interesting to see whether the traditional summer rally occurs, or the more recent pattern of a reversal's occurring during the Bummer, unfolds. ANTHONY W. TABELL DELAFIELD, HARVEY, TABELL INC. AWTebh Dow Jones Industrials 0200) 2420.22 S & P 500 (1200) 306.05 Cumulative Index (6/18/87) 3822.44 NO sta1Cment or eJfprCS310n 01 opInion or any other matter herDln contalfHhllS 01 IS to be deemed to be directly or mdlrec1ly an offer or the soliCitation 01 an oller to buy or sell any secunty referred 1001 mentioned The matter IS presented mcmly lor the convenience of the subSCriber While we believe the sources of our mfOrmatlon lobe reliable we In no way represent or guarantee the accuracy thereol nO! 01 the statements made herein Any aCllon 10 be taen by the subSCriber Sllould be based on hiS own InvestigatIOn and InlOfmatlon Delalleld, Harvey Tabell Inc, as a corDO'allon and liS olhcers or employees may now have, or may later take poslhons or trades tn respect to any secuntles mentioned In thiS or any luture ISSUe, and such position may be dllfcronllfom any views now or he/ealter epH!ssed In thiS or any other Issue Delafield Harvey Tabel! Inc whiCh IS registered With the SEC as an Investment adVisor may give adlce to ItS mestment adVisory and othe' customers mdependently 01 any statements made In Ihls or III any other Issue Further Inlormatlon on any security mentioned herem IS aallabte on request 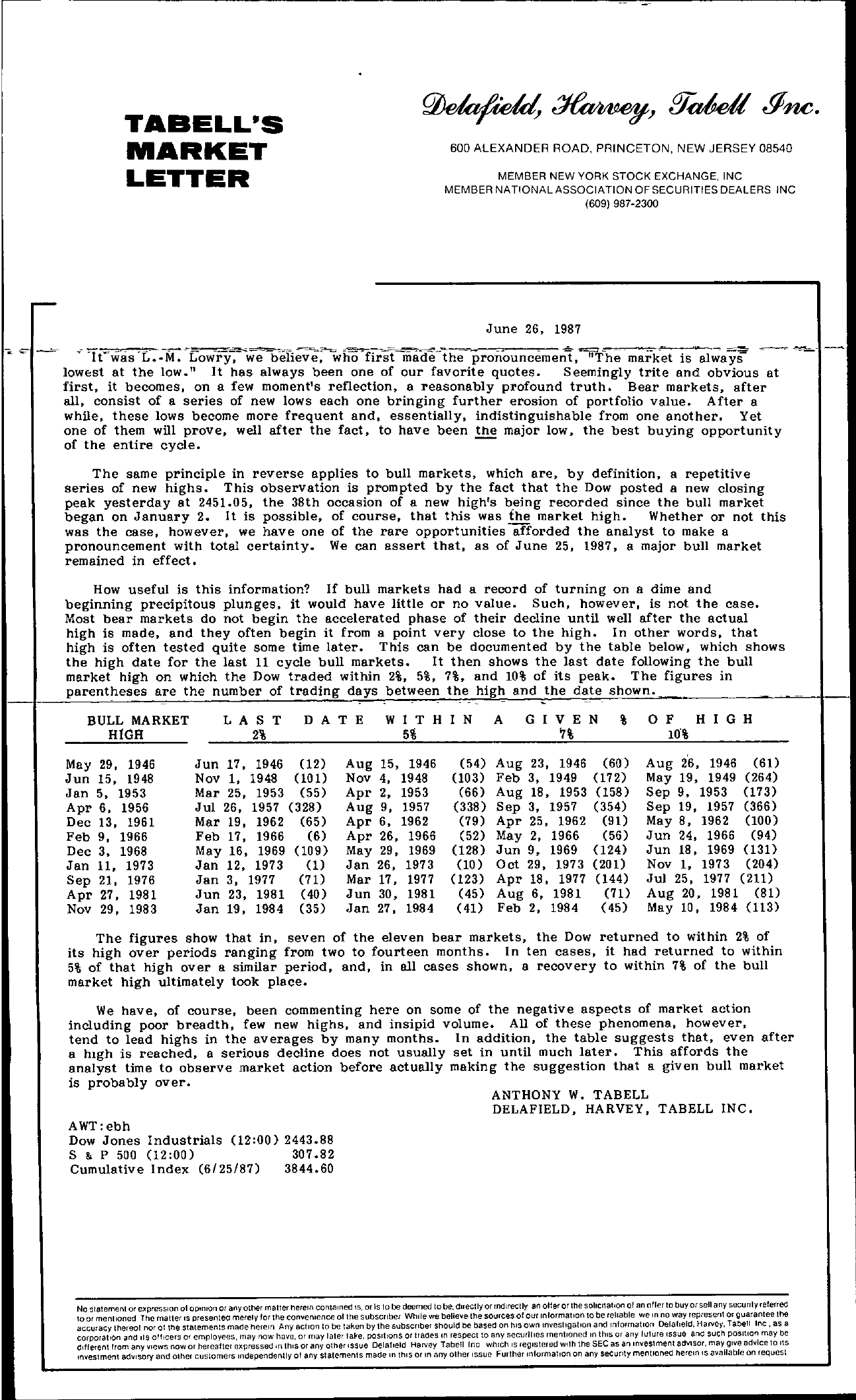