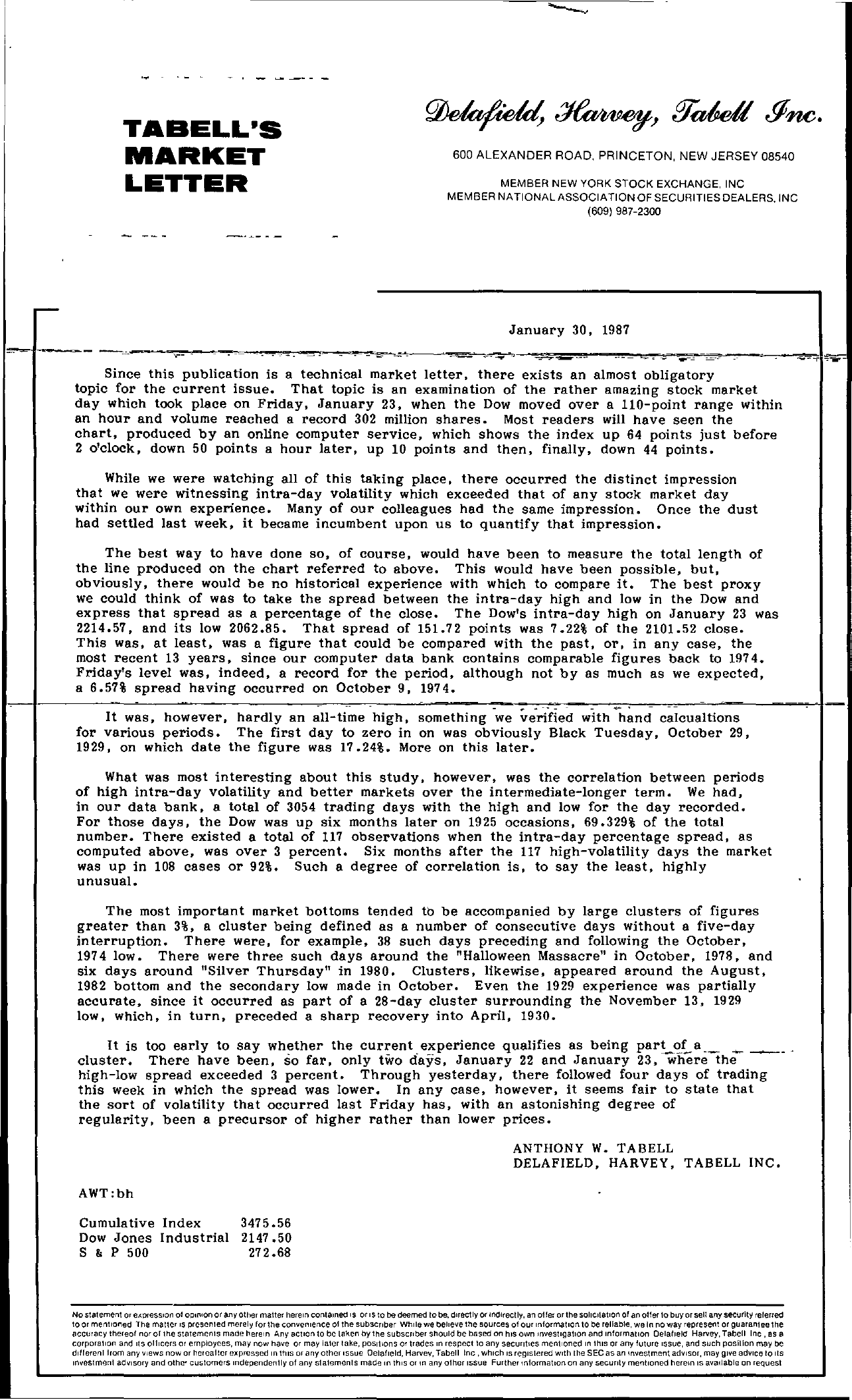 TABELL'S MARKET LETTER 600 ALEXANDER ROAD, PRINCETON, NEW JERSEY 08540 MEMBER NEW YORK STOCK EXCHANGE, INC MEMBER NATIONAL ASSOCIATION OF SECURITIES DEALERS, INC (6091987-2300 January 30, 1987 Since this publication is a technical market letter, there exists an almost obligatory topic for the current issue. That topic is an examination of the rather amazing stock market day which took place on Friday, January 23, when the Dow moved over a 1l0-point range within an hour and volume reached a record 302 million shares. Most readers will have seen the chart, produced by an online computer service, which shows the index up 64 points just before 2 o'clock, down 50 points a hour later, up 10 points and then, finally, down 44 points. While we were watching all of this taking place, there occurred the distinct impression that we were witnessing intra-day volatility which exceeded that of any stock market day within our own experience. Many of our colleagues had the same impression. Once the dust had settled last week, it became incumbent upon us to quantify that impression. The best way to have done so, of course, would have been to measure the total length of the line produced on the chart referred to above. This would have been possible, but, obviously, there would be no historical experience with which to compare it. The best proxy we could think of was to take the spread between the intra-day high and low in the Dow and express that spread as a percentage of the close. The Dow's intra-day high on January 23 was 2214.57, and its low 2062.85. That spread of 151.72 points was 7.22 of the 2101.52 close. This was, at least, was a figure that could be compared with the past, or, in any case, the most recent 13 years, since our computer data bank contains comparable figures back to 1974. Friday's level was, indeed, a record for the period, although not by as much as we expected, a 6.57 spread having occurred on October 9, 1974. It was, however, hardly an all-time high, something we ve-rirled with hand calcualtions for various periods. The first day to zero in on was obviously Black Tuesday, October 29, 1929, on which date the figure was 17.24. More on this later. What was most interesting about this study, however, was the correlation between periods of high intra-day volatility and better markets over the intermediate-longer term. We had, in our data bank, a total of 3054 trading days with the high and low for the day recorded. For those days, the Dow was up six months later on 1925 occasions, 69.329 of the total number. There existed a total of 117 observations when the intra-day percentage spread, as computed above, was oVer 3 percent. Six months after the 117 high-volatility days the market was up in 108 cases or 92. Such a degree of correlation is, to say the least, highly unusual. The most important market bottoms tended tb be accompanied by large clusters of figures greater than 3, a cluster being defined as a number of consecutive days without a five-day interruption. There were, for example, 38 such days preceding and following the October, 1974 low. There were three such days around the Halloween Massacre in October, 1978, and six days around Silver Thursday in 1980. Clusters, likewise, appeared around the August, 1982 bottom and the secondary low made in October. Even the 1929 experience was partially accurate, since it occurred as part of a 28-day cluster surrounding the November 13, 1929 low, which, in turn, preceded a sharp recovery into April, 1930. It is too early to say whether the current experience qualifies as being par!.-(E.a cluster. There have been, so far, only two days, January 22 and January 23, where the high-low spread exceeded 3 percent. Through yesterday, there followed four days of trading this week in which the spread was lower. In any case, however, it seems fair to state that the sort of volatility that occurred last Friday has, with an astonishing degree of regularity, been a precursor of higher rather than lower prices. ANTHONY W. TABELL DELAFIELD, HARVEY, TABELL INC. AWTbh Cumulative Index 3475.56 Dow Jones Industrial 2147.50 S & P 500 272.68 No statement or e..presslOn of oplfllon or any other matter herem contained IS or IS 10 be deemed to be, directly or indirectly. an oller or the soliCitation of an offer 10 buy or sel! any security referred loor mentIOned The matler IS presented merely forthe convenience 01 the subSCriber While we behevethc sources 01 our mlormallon 10 be reliable, we In noway represent or guarantee the accuracy thereof norol the statements made herem Any action to bc laken by the subScriber should be based on hiS own mvestlgatlon and Information Delafield Harvey, Tabell Inc, as a corporation and liS ottlcers or employces, may now have Of may later take, positions or trades In respect to any securlhes mentioned In thiS or any luture Issue, and such position may be dlfferenltrom any views now or helcal1cr Q)(pressed mthls or anyothor Issue Delafield, Harvev, Tabell Inc, which IS registered With the SEC as an Investment adVisor, may give adVICe to Its Investment adlsory and othc' customQrs Independently of any statements made In thiS or In any other Issue Further Inlorma\lon on any security mentioned herein IS available on reQuest