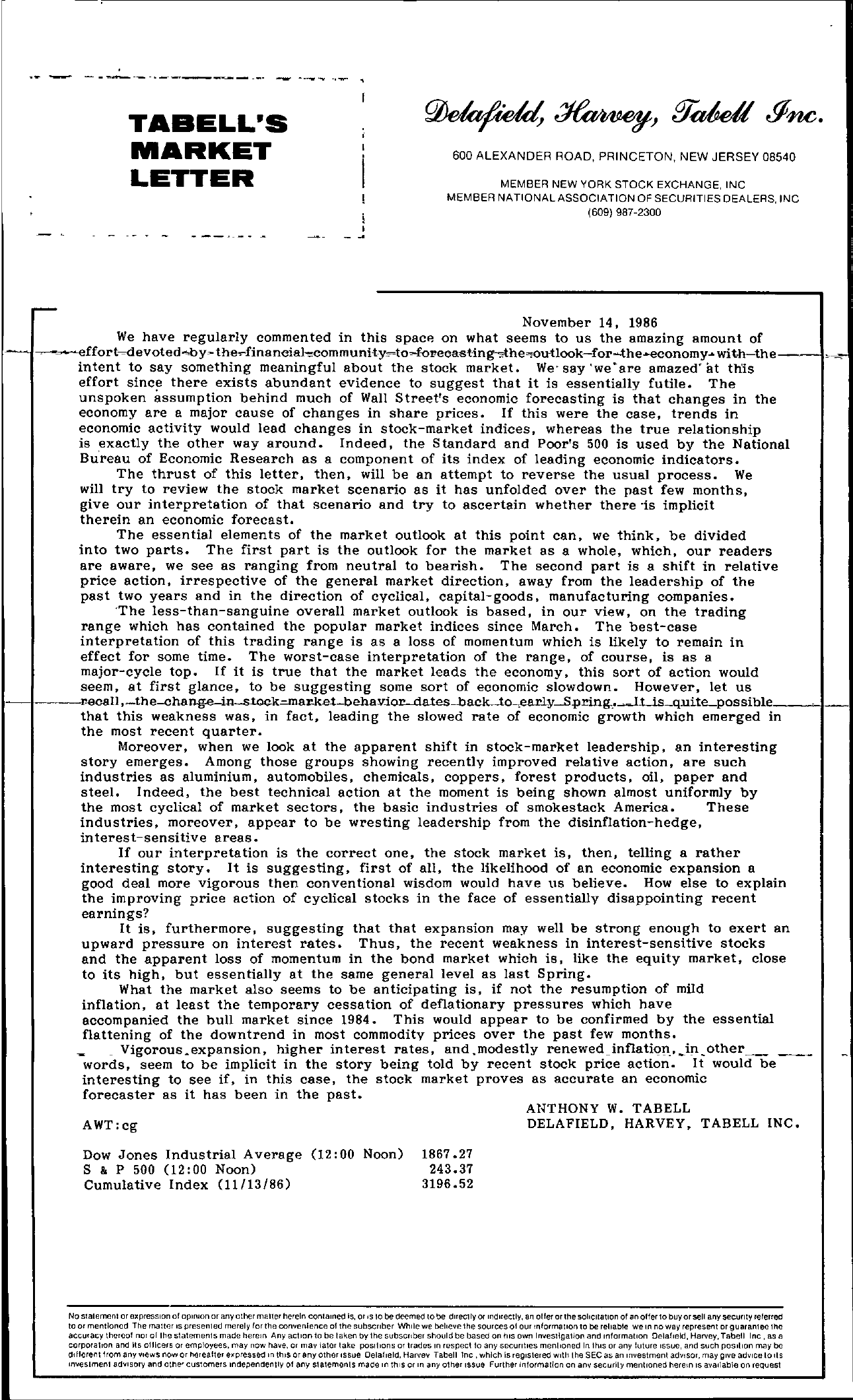 — -.——.—— …. -, TABELL'S MARKET LETTER i I i ! — ,i – 600 ALEXANDER ROAD, PRINCETON, NEW JERSEY 08540 MEMBER NEW YORK STOCK EXCHANGE, INC MEMBER NATIONAL ASSOCIATION OF SECURITIES DEALERS, INC (609) 987-2300 November 14, 1986 We have regularly commented in this space on what seems to us the amazing amount of – effortdevotedby-thefinancia.communi-tyto.fl'ecasHngo,the,outlook-for-the-economywith-the— . intent to say something meaningful about the stock market. We' say 'we'are amazed' at this effort sinc there exists abundant evidence to suggest that it is essentially futile. The unspoken assumption behind much of Wall Street's economic forecasting is that changes in the economy are a major cause of changes in share prices. If this were the case, trends in economic activity would lead changes in stock-market indices, whereas the true relationship is exactly the other way around. Indeed, the Standard and Poor's 500 is used by the National Bu'reau of Economic Research as a component of its index of leading economic indicators. The thrust of this letter, then, will be an attempt to reverse the usual process. We will try to review the stock market scenario as it has unfolded over the past few months, give our interpretation of that scenario and try to ascertain whether there -is implicit therein an economic forecast. The essential elements of the market outlook at this point can, we think, be divided into two parts. The first part is the outlook for the market as a whole, which, our readers are aware, we see as ranging from neutral to bearish. The second part is a shift in relative price action, irrespective of the general market direction, away from the leadership of the past two years and in the direction of cyclical, capital-goods, manufacturing companies. -The less-than-sanguine overall market outlook is based, in our view, on the trading range which has contained the popular market indices since March. The best-case interpretation of this trading range is as a loss of momentum which is likely to remain in effect for some time, The worst-case interpretation of the range, of course, is as a major-cycle top. If it is true that the market leads the economy, this sort of action would seem, at first glance, to be suggesting some sort of economic slowdown. However, let us 1–I—–rrecaU ,-the-change.-in-s1ockmal'kelbehavjor d. tes-back…to-,earLy–SptinK….JLliLq.uitp-possible -J that this weakness was, in fact, leading the slowed rate of economic growth which emerged in the most recent quarter. Moreover, when we look at the apparent shift in stock-market leadership, an interesting story emerges. Among those groups showing recently improved relative action, are such industries as aluminium, automobiles, chemicals, coppers, forest products, oil, paper and steel. Indeed, the best technical action at the moment is being shown almost uniformly by the most cyclical of market sectors, the basic industries of smokestack America. These industries, moreover, appear to be wresting leadership from the disinflation-hedge, interest-sensitive areas. If our interpretation is the correct one, the stock market is, then, telling a rather interesting story. It is suggesting, first of all, the likelihood of an economic expansion a good deal more vigorous then conventional wisdom would have tiS believe. How else to explain the improving price action of cyclical stocks in the face of essentially disappointing recent earnings It is, furthermore, suggesting that that expansion may well be strong enough to exert an upward pressure on interest rates. Thus, the recent weakness in interest-sensitive stocks and the apparent loss of momentum in the bond market which is, like the equity market, close to its high, but essentially at the same general level as last Spring. What the market also seems to be anticipating is, if not the resumption of mild inflation, at least the temporary cessation of deflationary pressures which have accompanied the bull market since 1984. This would appear to be confirmed by the essential flattening of the downtrend in most commodity prices over the past few months. Vigorous ,expansion, higher interest rates, and.modestly renewedinflation.,in,other words, seem to be implicit in the story being told by recent stock price action. It would be interesting to see if, in this case, the stock market proves as accurate an economic forecaster as it has been in the past. ANTHONY W. TAB ELL AWTcg DELAFIELD, HARVEY, TABELL INC. Dow Jones Industrial Average (12 00 Noon) 1867.27 S & P 500 (12 00 Noon) 243.37 Cumulative Index (11113/86) 3196.52 NO statement or expression of opinion or any other maHer herein contamed 15. or IS 10 be deemed to be dlreClty or Indirectly, an offer or the soliCitation of an offer to buyor sell any security referred to or mentioned The maum IS presented merely forthe convenience 01 the subSCriber While we belieyethe sourcesot our information to be reliable we In no way represent or guarantee the accuracy thereof nor oi the statements made herein Any action to be taken by lhe subscnber should be base! on hiS own Invest!gallon and information Delafield, Harvey, Tabell Inc, as a corporation and Its otllcers or employees, may now haye, or may later take POSitions or trades In respect to any securities menlloned In thiS or any luture ISSue, and such POSition may be dlflerent from any Ylews now or herealler expressed In thiS or any other Issue Delafield, Harvey Tabell Inc, which is registered With the SEC as an Inyestment adYlsor, may glye adYlce to Its Investment adVisory and othe' customers Independenlly of any statements made In thiS or In ;Iny other Issue Further Inlormal/on on any security mentioned herem IS ayallable on request