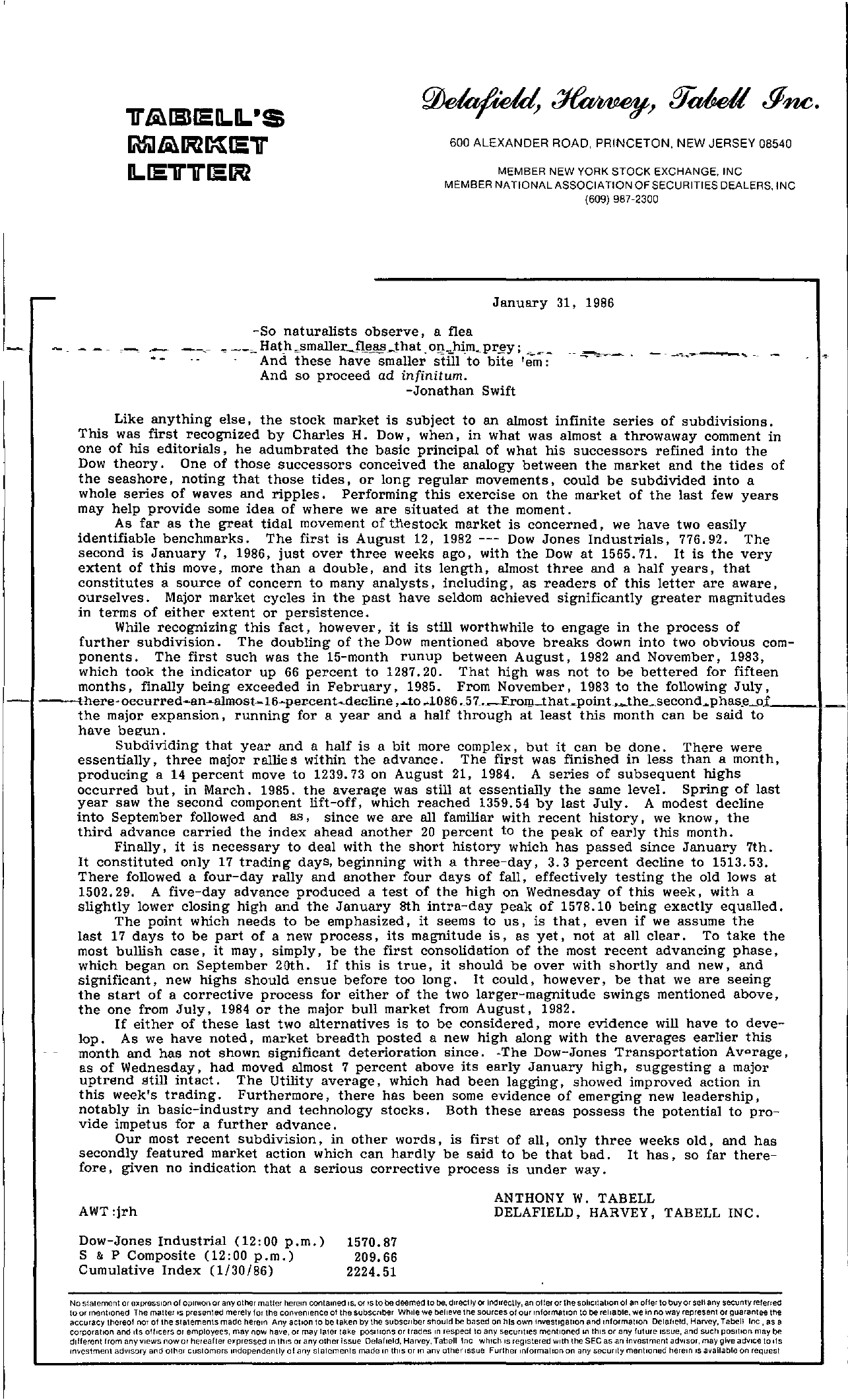 'U'&umrEn..n..' s IiUil IR2IXUEU' n..rEU'''U'rElR2 600 ALEXANDER ROAD, PRINCETON, NEW JERSEY 08540 MEMBER NEW YORK STOCK EXCHANGE, INC MEMBER NATIONAL ASSOCIATION OF SECURITIES DEALERS, INC (609) 987-2300 January 31, 1986 — -So naturalists observe, a flea '. HathsmallerflE!l!SJhat0!l.,.himpr.l'y; – And these have smaller still to bite 'em .– —- And so proceed ad infinitum. -Jonathan Swift Like anything else, the stock market is subject to an almost infinite series of subdivisions. This was first recognized by Charles H. Dow, when, in what was almost a throwaway comment in one of his editorials, he adumbrated the basic principal of what his successors refined into the Dow theory. One of those successors conceived the analogy between the market and the tides of the seashore, noting that those tides, or long regular movements, could be subdivided into a whole series of waves and ripples. Performing this exercise on the market of the last few years may help provide some idea of where we are situated at the moment. As far as the great tidal movement of tl\estock market is concerned, we have two easily identifiable benchmarks. The first is August 12, 1982 — Dow Jones Industrials, 776.92. The second is January 7, 1986, just over three weeks ago, with the Dow at 1565.71. It is the very extent of this move, more than a double, and its length, almost three and a half years, that constitutes a source of concern to many analysts, including, as readers of this letter are aware, ourselves. Major market cycles in the past have seldom achieved significantly greater magnitudes in terms of either extent or persistence. While recognizing this fact, however, it is still worthwhile to engage in the process of further subdivision. The doubling of the Dow mentioned above breaks down into two obvious components. The first such was the 15-month runup between August, 1982 and November, 1983, which took the indicator up 66 percent to 1287.20. That high was not to be bettered for fifteen months, finally being exceeded in February, 1985. From November, 1983 to the following July, –t-here-oecurred-an-almost16–pevcentdecline ,to .1086 .57.-F.rol!lthatpoint.thesecondphasLoJ'- 1 the major expansion, running for a year and a half through at least this month can be said to have beg-un. Subdividing that year and a half is a bit more complex, but it can be done. There were essentially, three major rallies within the advance. The first was finished in less than a month, producing a 14 percent move to 1239.73 on August 21, 1984. A series of subsequent highs occurred but, in March. 1985. the average was still at essentially the same level. Spring of last year saw the second component lift-off, which reached 1359.54 by last July. A modest decline into September followed and as, since we are all familiar with recent history, we know, the third advance carried the index ahead another 20 percent to the peak of early this month. Finally, it is necessary to deal with the short history which has passed since January 7th. It constituted only 17 trading dayS, beginning with a three-day, 3.3 percent decline to 1513.53. There followed a four-day rally and another four days of fall, effectively testing the old lows at 1502.29. A five-day advance produced a test of the high on Wednesday of this week, with a slightly lower closing high and the January 8th intra-day peak of 1578.10 being exactly equalJed. The point which needs to be emphasized, it seems to us, is that, even if we assume the last 17 days to be part of a new process, its magnitude is, as yet, not at all clear. To take the most bullish case, it may, simply, be the first consolidation of the most recent advancing phase, which began on September 20th. If this is true, it should be over with shortly and new, and significant, new highs should ensue before too long. It could, however, be that we are seeing the start of a corrective process for either of the two larger-magnitude swings mentioned above, the one from July, 1984 or the major bull market from August, 1982. If either of these last two alternatives is to be considered, more evidence will have to develop. As we have noted, market breadth posted a new high along with the averages earlier this month and has not shown significant deterioration since. -The Dow-Jones Transportation Avorage, as of Wednesday, had moved almost 7 percent above its early January high, suggesting a major uptrend still intact. The Utility average, which had been lagging, showed improved action in this week's trading. Furthermore, there has been some evidence of emerging new leadership, notably in basic-industry and technology stocks. Both these areas possess the potential to provide impetus for a further advance. Our most recent subdivision, in other words, is first of all, only three weeks old, and has secondly featured market action which can hardly be said to be that bad. It has, so far therefore, given no indication that a serious corrective process is under way. AWTjrh ANTHONY W. TABELL DELAFIELD, HARVEY, TAB ELL INC. Dow-Jones Industrial (1200 p.m.) S & P Composite (1200 p.m.) Cumulative Index (1/30/86) 1570.87 209.66 2224.51 NO statement or epresslon of Opinion or any other matter herem contained IS. or IS to be deemed 10 be, directly or IJldlfectly, an 01lel ollhe solicltatlOlI ot an ofler 10 buyor sell any secunty lelened toor mentioned The mattellS presented merely for the convenience 01 the subSCriber While we believe the sources of our tnformatlOn to be rei table, we In no way represent or guarantee the accuracy Iht!reof nor of the slatements made hemin Any acllon to be laken by the subSCliber should be based on his own Investigation aild tnformatlon Delaheld, Harvey, Tabel! Inc, as a corporation and tts o!ttcers 01 employees, may now have, or may later take poSlllons or trades In respect to any seCUrities mentioned In thiS or any future Issue, and such pOStlton may be dlHerent from any views nower hereafter erpressed In thiS or any other Issue Delafield, Harvey, Tabell Inc which IS registered With the SEC as an Investment adVisor, may give adVice tOils investment adVISOry and other customers Independently 01 any slatements made In thiS or In any other Issue Further Informallon on any security mentioned herein IS aallabte on request