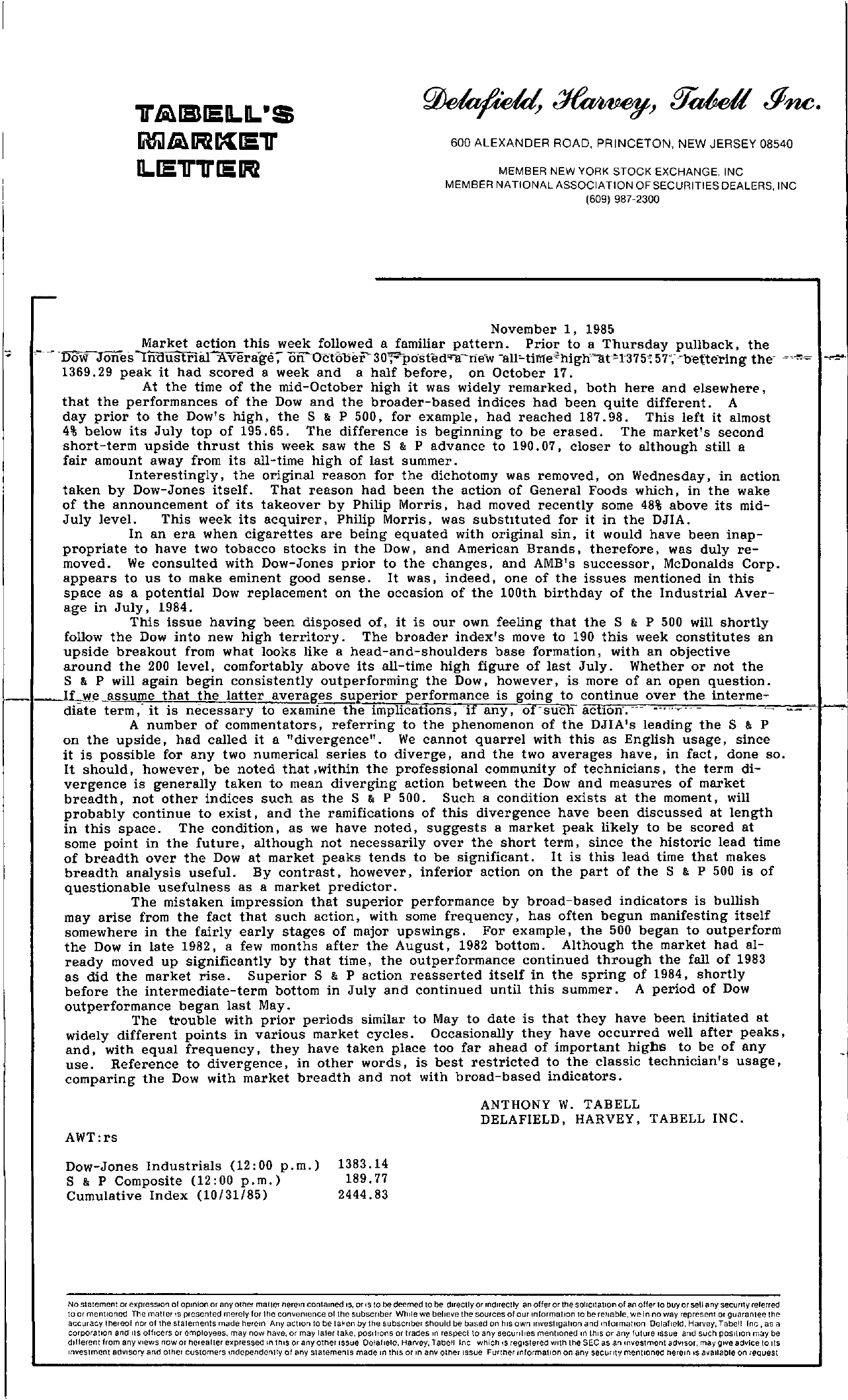 V Lii.\1m1ED..D..'S Ia1iI Lii.\ IRl lEV Il.IEVVIEIRl 600 ALEXANDER ROAD, PRINCETON, NEW JERSEY 08540 MEMBER NEW YORK STOCK EXCHANGE, INC MEMBER NATIONAL ASSOCIATION OF SECURITIES DEALERS, INC (609) 987-2300 November 1, 198, Market action this week followed a familiar pattern. Prior to a Thursday pullback, the . – Dow Jones lnaustrliJ.l1Verage- on o-ctooer- 30posfeda-ne-w -alltifijehlgWll.t137''; '7, -b-e(trlng the- – – 1369.29 peak it had scored a week and a half before, on October 17. At the time of the midOctober high it was widely remarked, both here and elsewhere, that the performances of the Dow and the broaderbased indices had been quite different. A day prior to the Dow's high, the S & P 500, for example, had reached 187.98. This left it almost 4 below its July top of 195.65. The difference is beginning to be erased. The market's second short-term upside thrust this week saw the S & P advance to 190.07, closer to although still a fair amount away from its all-time high of last summer. Interestingly, the original reason for the dichotomy was removed, on Wednesday, in action taken by Dow-Jones itself. That reason had been the action of General Foods which, in the wake of the announcement of its takeover by Philip Morris, had moved recently some 48 above its mid- July level. This week its acquirer, Philip Morris, was substItuted for it in the DJIA. In an era when cigarettes are being equated with original sin, it would have been inap- propriate to have two tobacco stocks in the Dow, and American Brands, therefore, was duly re- moved. We consulted with Dow-Jones prior to the changes, and AMB's successor, McDonalds Corp. appears to us to make eminent good sense. It was I indeed, one of the issues mentioned in this space as a potential Dow replacement on the occasion of the 100th birthday of the Industrial Aver- age in July, 1984. This issue having been disposed of, it is our own feeling that the S & P 500 will shortly follow the Dow into new high territory. The broader index's move to 190 this week constitutes an upside breakout from what looks like a head-and-shoulders base formation, with an objective around the 200 level, comfortably above its all-time high figure of last July. Whether or not the S & P will again begin consistently outperforming the Dow, however, is more of an open question. -IL…we assume that the latter averagl'erior performance is going to continue over the interme- diate term, it is necessary to examine the implicationS, -if any, of suclf actlon-. — ………. — – – – -.- i A number of commentators, referring to the phenomenon of the DJIA's leading the S & P on the upside, had called it a divergence. We cannot quarrel with this as English usage, since it is possible for any two numerical series to diverge, and the two averages have, in fact, done so. It should, however, be noted that ,within the professional community of technicians, the term di- vergence is generally taken to mean diverging action between the Dow and measures of market breadth, not other indices such as the S & P 500. Such a condition exists at the moment, will probably continue to exist, and the ramifications of this divergence have been discussed at length in this space. The condition, as we have noted, suggests a market peak likely to be scored at some point in the future, although not necessarily over the short term, since the historic lead time of breadth over the Dow at market peaks tends to be significant. It is this lead time that makes breadth analysis useful. By contrast, however, inferior action on the part of the S & P 500 is of questionable usefulness as a market predictor. The mistaken impression that superior performance by broad-based indicators is bullish may arise from the fact that such action, with some frequency, has often begun manifesting itself somewhere in the fairly early stages of major upswings. For example, the 500 began to outperform the Dow in late 1982, a few months after the August, 1982 bottom. Although the market had al- ready moved up significantly by that time, the outperformance continued through the fall of 1983 as did the market rise. Superior S & P action reasserted itself in the spring of 1984, shortly before the intermediate-term bottom in July and continued until this summer. A period of Dow outperformance began last May. The trouble with prior periods similar to May to date is that they have been initiated at widely different points in various market cycles. Occasionally they have occurred well after peaks, and, with equal frequency, they have taken place too far ahead of important higbs to be of any use. Reference to divergence. in other words, is best restricted to the classic technician's usage, comparing the Dow with market breadth and not with broad-based indicators. AWTrs ANTHONY W. TABELL DELAFIELD, HARVEY, TABELL INC. Dow-Jones Industrials (1200 p.m.) 1383.14 S & P Composite (1200 p.m.) 189.77 Cumulative Index (10/31/8,) 2444.83 No statement Of epresslon of opinion or any other matter herem contained IS, or IS 10 be deemed to be directly or mdlrectly an offer or the sollcllatlon of an offer to buy or seli any secuflly referred toor mentioned The mailer IS presented merely for tho convenience at the subSCriber While we believe the sources of our Information to be reliable, weln no way represent or guarantee the accuracy thereof nor of the statements made herem Any action to be laen by the subSCriber should be based on hiS own investigation and mformatlon Delafield, Harvey, Tabell Inc, as a corporation and ItS officers or employees, may now have, or may later tae, POSitions or trades In respect to any secufilies mentIOned In thiS or any future Issue and such pOSition may be dlilemnt from any views nower hcreafler expressed In thiS or anyothel Issue Delafield, Harvey, Tabell Inc which IS registered With the SEC as an Investment adVisor, may glV!! advfce to Its Investment adVISOry and other customers mdcpcndcnHy of any statemenls made In thiS or In any other Issue Further informatIOn on any security mentIoned herem IS avaIlable on request