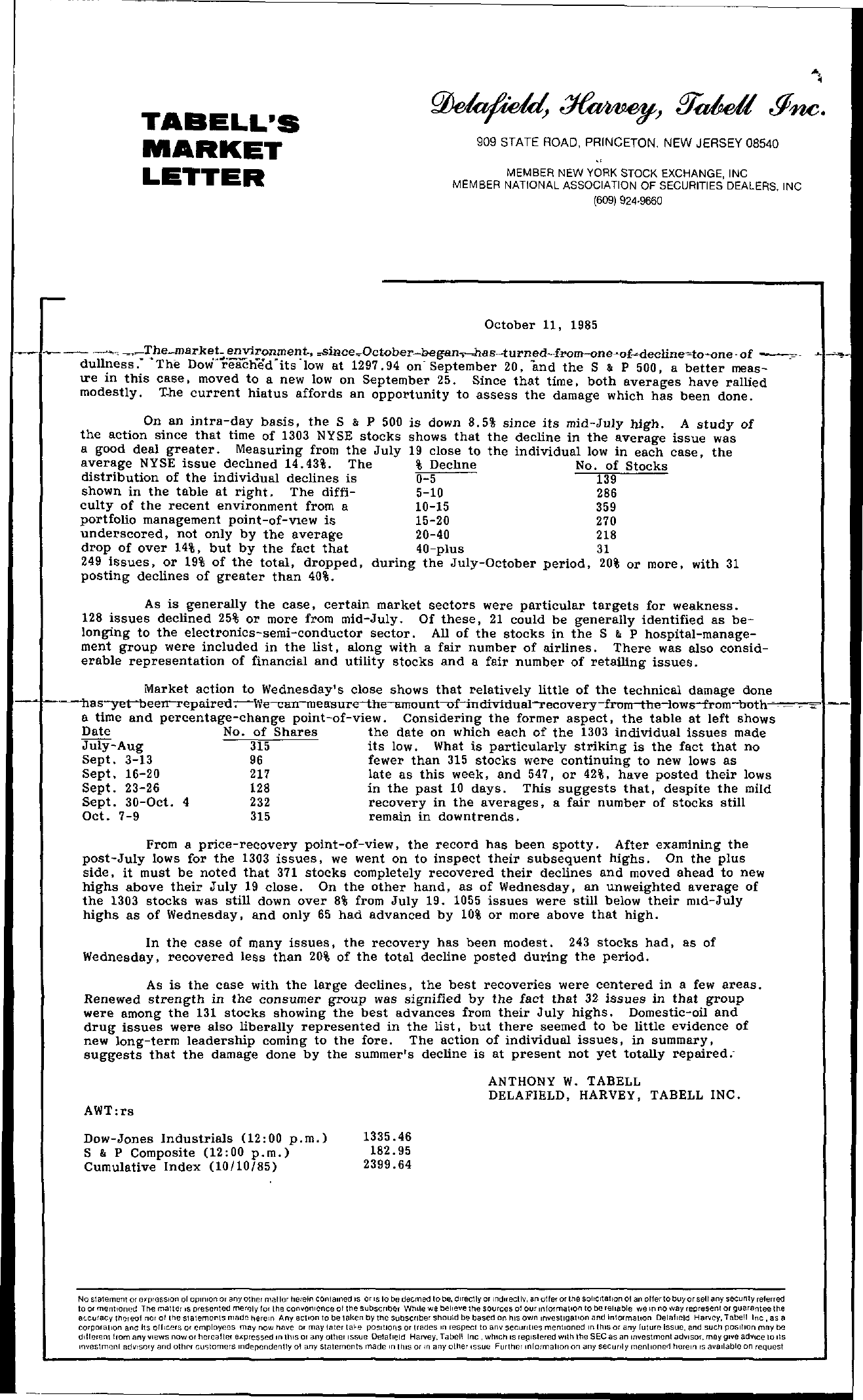 TABELL'S MARKET LETTER 909 STATE ROAD, PRINCETON. NEW JERSEY 08540 MEMBER NEW YORK STOCK EXCHANGE, INC MEMBER NATIONAL ASSOCIATION OF SECURITIES DEALERS, INC (609) 9249660 October 11, 1985 – – c ThemarkeL environment-. sinceOctober-beganas-turned.f-rom-oneof……decline–toone- of —-c-dullness The Dow'';'eachedi!s 'low at 1297.94 on September 20, imd the S & P 500, a better measlI'e in this case, moved to a new low on September 25. Since that time, both averages have rallied modestly. T.he current hiatus affords an opportunity to assess the damage which has been done. –'-' On an intra-day basis, the S & P 500 is down 8.5 since its mid-July high. A study of the action since that time of 1303 NYSE stocks shows that the decline in the average issue was a good deal greater. Measuring from the July 19 close to the individual low in each case, the average NYSE issue decilned 14.43. The Decilne No. of Stocks distribution of the individual declines is 0-5 139 shown in the table at right. The diffi- 5-10 286 culty of the recent environment from a 10-15 359 portfolio management point-of-Vlew is 15-20 270 underscored, not only by the average 20-40 218 drop of over 14, but by the fact that 40-plus 31 249 issues, or 19 of the total, dropped, during the July-October period, 20 or more, with 31 posting declines of greater than 40. As is generally the case, certain market sectors were particular targets for weakness. 128 issues declined 25 or more from mid-July. Of these, 21 could be generally identified as belonging to the electronics-semi-conductor sector. All of the stocks in the S & P hospital-management group were included in the list, along with a fair number of airlines. There was also considerable representation of financial and utility stocks and a fair number of retailing issues. Market action to Wednesday's close shows that relatively little of the technical damage done – – – h a s – y e t 4 e e n – r e p a i r e u – .-Wlffi-measure-tJre-amount-uf-indiv1uualecovery-fronrthe-jows-irom-both'''—,-,,,-1 a time and percentage-change point-of-view. Considering the former aspect, the table at left shows Date No. of Shares the date on which each of the 1303 individual issues made July-Aug 315 its low. What is particularly striking is the fact that no Sept. 3-13 96 fewer than 315 stocks were continuing to new lows as Sept. 16-20 217 late as this week, and 547, or 42, have posted their lows Sept. 23-26 128 in the past 10 days. This suggests that, despite the mild Sept. 30-0ct. 4 232 recovery in the averages, a fair number of stocks still Oct. 7-9 315 remain in downtrends . From a price-recovery point-of-view, the record has been spotty. After examining the post-July lows for the 1303 issues, we went on to inspect their subsequent highs. On the plus side, it must be noted that 371 stocks completely recovered their declines and moved ahead to new highs above their July 19 close. On the other hand, as of Wednesday, an un weighted average of the 1303 stocks was still down over 8 from July 19. 1055 issues were still below their mld-July highs as of Wednesday, and only 65 had advanced by 10 or more above that high. In the case of many issues, the recovery has been modest. 243 stocks had. as of Wednesday, recovered less than 20 of the total decline posted during the period. As is the case with the large declines, the best recoveries were centered in a few areas. Renewed strength in the consumer group was signified by the fact that 32 issues in that group were among the 131 stocks showing the best advances from their July highs. Domestic-oil and drug issues were also liberally represented in the list, but there seemed to be little evidence of new long-term leadership coming to the fore. The action of individual issues, in summary, suggests that the damage done by the summer's decline is at present not yet totally repaired; AWTrs Dow-Jones Industrials (12 00 p. m.) S & P Composite (1200 p.m.) Cumulative Index (10/10/85) 1335.46 182.95 2399.64 ANTHONY W. TABELL DELAFIELD, HARVEY, TAB ELL INC. No statemlJnl or eplcSSlon 01 opinion or any other maIler hereIn COntained IS or IS 10 be deemed 10 be, drrec11y or IndirectlY, an oHer or the sollCI\atlon 01 an offer to buyor sell any secunty referred to or mentioned The matter IS presented meralyfor the convonlonce of the Subscriber White we behevethe sources 01 our mlorma\lon to be reliable we In no way represent or guarantee the at.culacy thereof nor of the statements made herem Any actlCn to be taken by the SUbscriber should be based on hiS own Investigalton and Inlormatron Delafield Harvey, Tabel1 Inc, as a corporal Ion and Its oilicers or employees may now have or may later tae POSitiOnS or trades In respect to any securities mentioned m thiS or any luture Issue, and such position may be ddlerent tram anyvlcws nOwor hereafter e.(prcssed In Ihlsor any other Issue Delafield Harvey, Taben Inc, whIch IS registered With the SECasBn Investment adVisor, mByglve adVice 10115 mvestm(!nl advlsmy and othN customers Indepondentty 01 any statements made In thiS 01 In any othel Issue Further Inlormatlon on any securll y montlonerl herein IS available on requast