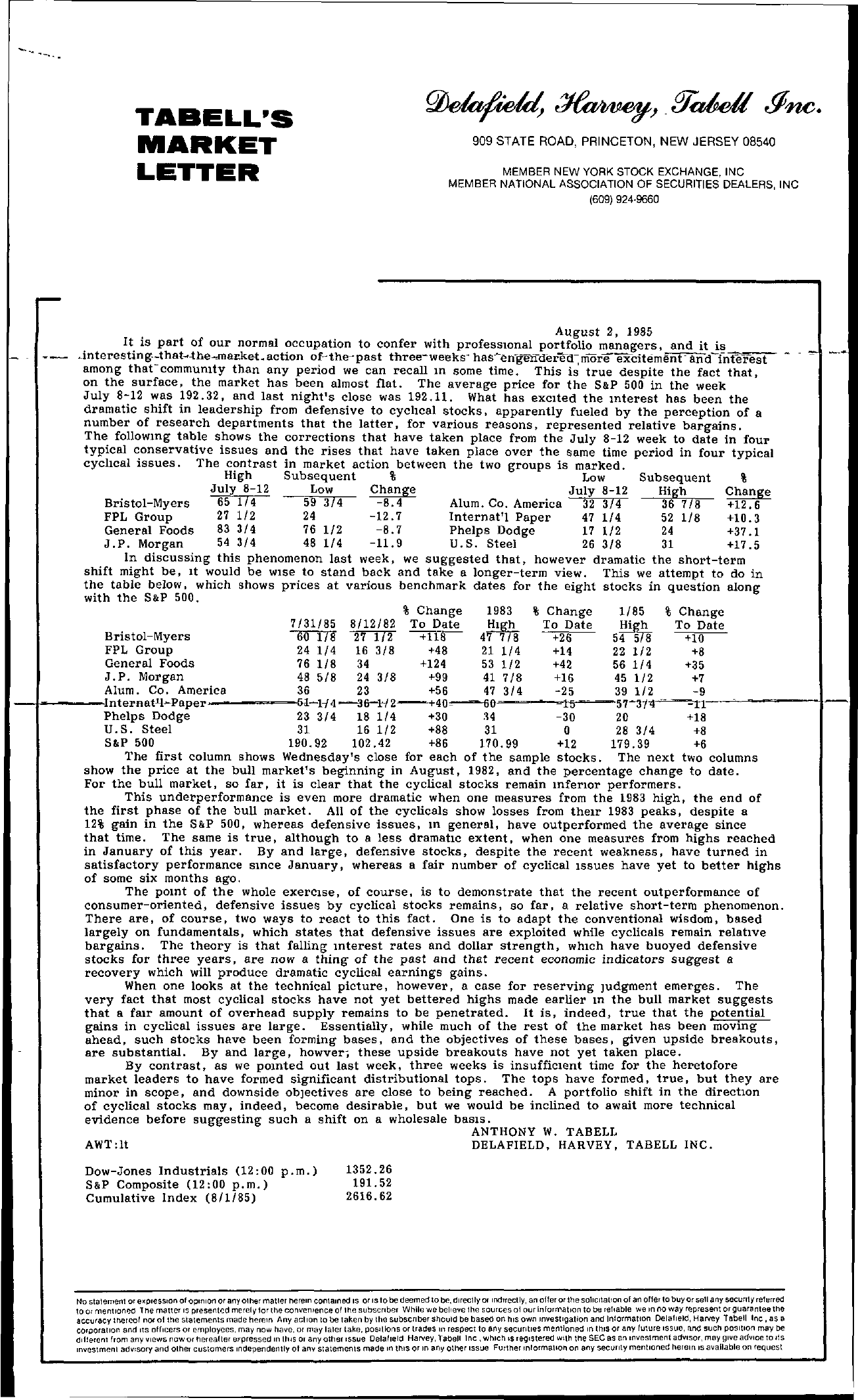 -. –, TABELL'S MARKET LETTER 909 STATE ROAD, PRINCETON, NEW JERSEY 08540 MEMBER NEW YORK STOCK EXCHANGE, INC MEMBER NATIONAL ASSOCIATION OF SECURITIES DEALERS, INC (609) 9249660 August 2, 1985 It is part of our normal occupation to confer with professlOnal portfolio managers, and it is – – interestingthat…-the-.o;maket action ofthe-past three-weeks has–engenderedmoreexcitement- and-fiiter-est among that comrnumty than any period we can recall In some time. This is true despite the fact that, on the surface, the market has been almost flat. The average price for the S&P 500 in the week July 8-12 was 192.32. and last night's close was 192.11. What has excIted the Interest has been the dramatic shift in leadership from defensive to cychcal stocks. apparently fueled by the perception of a number of research departments that the latter, for various reasons, represented relative bargains. The followlng table shows the corrections that have taken place from the July 8-12 week to date in four typical conservative issues and the rises that have taken place over the same time period in four typical cyclIcal issues. The contrast in market action between the two groups is marked. High Subsequent Low Subsequent July 8-12 Low Change July 8-12 High Change Bristol-Myers 65 1/4 59 3/4 8.4 Alum. Co. America 32 374 36 7/8 12.6 FPL Group 271/2 24 -12.7 Internat'l Paper 471/4 521/8 10.3 General Foods 833/4 761/2 -8.7 Phelps Dodge 17 1/2 24 37.1 J.P. Morgan 543/4 481/4 -11.9 U.S. Steel 263/8 31 17.5 In discussing this phenomenon last week, we suggested that. however dramatic the short-term shift might be, It would be WIse to stand back and take a longer-term view. This we attempt to do in the table below. which shows prices at various benchmark dates for the eight stocks in question along with the S&P 500. Bristol-Myers Change 1983 Change 7/31/85 8/12/82 To Date Hlh To Date 60 1/8 27 1/2 -;-IIS- 47 7 8 26 1/85 Change To Date 54578 10 FPL Group 24 1/4 16 3/8 48 21 1/4 14 22 1/2 8 General Foods 76 1/8 34 124 53 1/2 42 56 1/4 35 J.P. Morgan 485/8 24 3/8 99 417/8 16 45 1/2 7 Alum. Co. America –/.—–lnteratlPaper 36 23 56 47 3/4 I);!-I-I4—l6-I-I2-40—UO -25 39 1/2 -9 15 57–31-4 -111——- Phelps Dodge 23 3/4 18 1/4 30 4 -30 20 18 U. S. Steel 31 16 1/2 88 31 0 28 3/4 8 S&P 500 190.92 102.42 86 170.99 12 179.39 6 The first column shows Wednesday's close for each of the sample stocks. The next two columns show the price at the bull market's beginning in August, 1982, and the percentage change to date. For the bull market. so far, it is clear that the cyclical stocks remain lnferior performers. This underperformance is even more dramatic when one measures from the 1983 high. the end of the first phase of the bull market. All of the cyclicals show losses from theIr 1983 peaks, despite a 12 gain in the SliP 500, whereas defensive issues. In general, have outperformed the average since that time. The same is true. although to a less dramatic extent. when one measures from highs reached in January of this year. By and large. defensive stocks, despite the recent weakness, have turned in satisfactory performance Slnce January, whereas a fair number of cyclical lssues have yet to better highs of some six months ago. The pOlnt of the whole exerClse, of course. is to demonstrate that the recent outperformance of consumer-oriented, defensive issues by cyclical stocks remains, so far, a relative short-term phenomenon. There are. of course. two ways to react to this fact. One is to adapt the conventional wisdom, based largely on fundamentals. which states that defensive issues are exploited while cyclicals remain relative bargains. The theory is that falling Interest rates and dollar strength, WhICh have buoyed defensive stocks for three years, are now a thing of the past and that recent economic indicators suggest 8 recovery which will produce dramatic cyclical earnings gains. When one looks at the technical picture, however, a case for reserving Judgment emerges. The very fact that most cyclical stocks have not yet bettered highs made earlier In the bull market suggests that a fror amount of overhead supply remains to be penetrated. It is, indeed, true that the potential gains in cyclical issues are large. Essentially, while much of the rest of the market has been mOVIng ahead. such stocks have been forming bases, and the objectives of these bases, given upside breakouts, are substantial. By and large, howver, these upside breakouts have not yet taken place. By contrast, as we pOlnted out last week, three weeks is insufficlent time for the heretofore market leaders to have formed significant distributional tops. The tops have formed, true. but they are minor in scope. and downside objectives are close to being reached. A portfolio shift in the direction of cyclical stocks may. indeed, become desirable, but we would be inclined to await more technical evidence before suggesting such a shift on a wholesale basls. ANTHONY W. TAB ELL AWTlt DELAFIELD, HARVEY, TABELL INC. Dow-Jones Industrials (12 00 p. m.) S&P Composite (12 00 p.m.) Cumulative Index (8/1/85) 1352.26 191. 52 2616.62 No statement 01 eKpresslon of opInion or any other matter herein contained IS or IS 10 be deemed 10 be. directly or IndIrectly, an olfer or the soliCitation of an orler to buyor sell any security relerred to 01 mentioned The matter IS presented merely lor the convemence ollhe subscriber While we believe Ihe sourcesol our Information to be reflable we In no way represent or guarantee the accuracy thereof nor ot the statements made herem Any acllon to be taken by the subscnber snould be base! on hiS own mvestlgatlon and Informat1On Delalleld. Harvey labeH Inc, as a corporation and Its officers 01 employees, may now have, or may laler take, pOSItions or trades In respect to any securities mentioned in thiS or any future Issue, and SUCh POSition may be dilierent Irom any views nowor hereafter crpressed In thiS or any other Issue Delafield Harvey, 'rabell Inc, which IS reglsterecl With the SEC as an Inveslment adVisor, may give adVice to 115 Investment adVISOry and other customers rndependenlly of anv statements made In thiS or In any other Issue Further mlormahon on any security mentioned herein IS available on reQuest