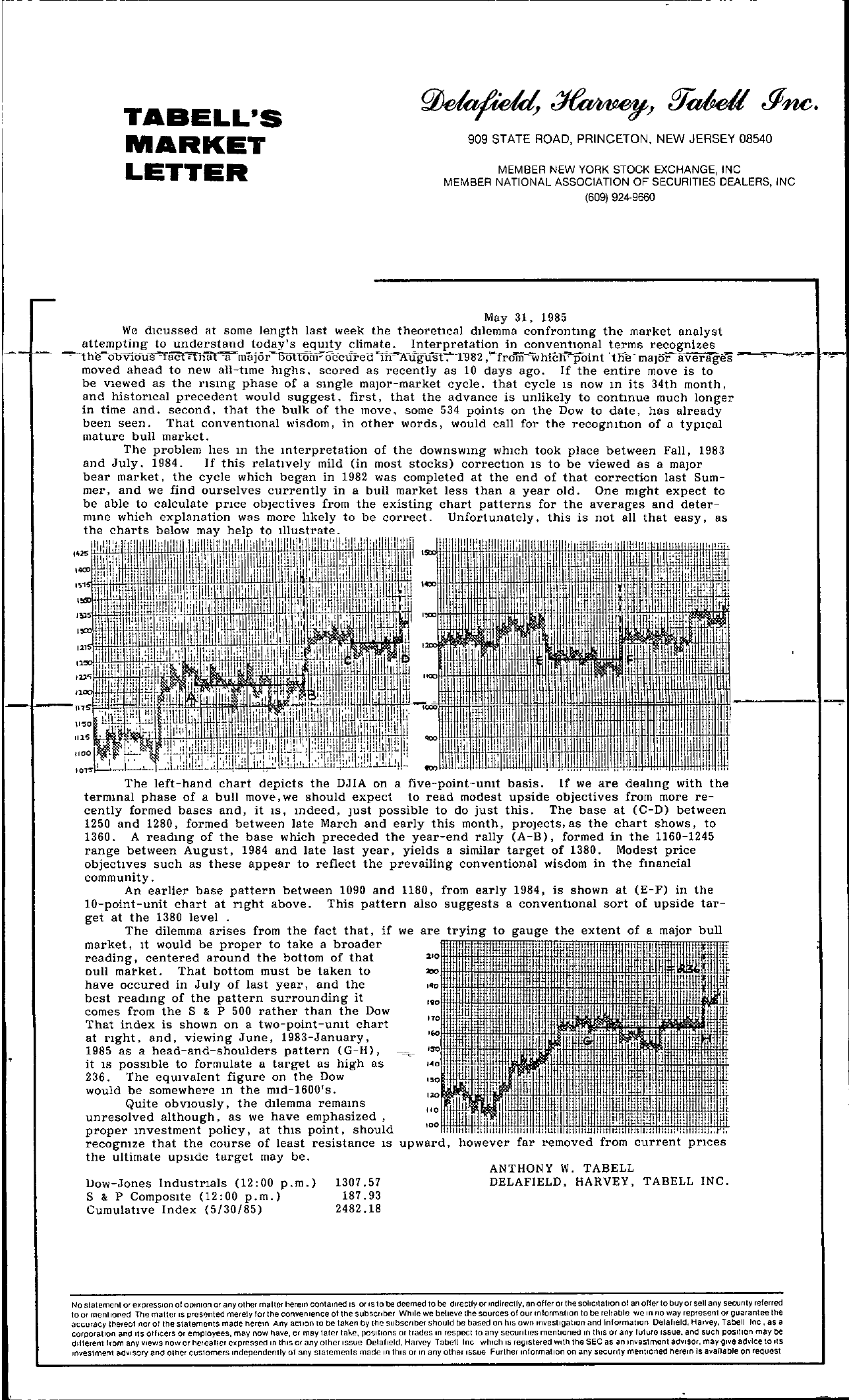 – – ——— —————————— TABELL'S MARKET LETTER 909 STATE ROAD, PRINCETON, NEW JERSEY 08540 MEMBER NEW YORK STOCK EXCHANGE, INC MEMBER NATIONAL ASSOCIATION OF SECURITIES DEALERS, INC (609) 924-9660 May 31, 1985 We dlcussed at some length last week the theoretIcal dIlemma confrontmg the market analyst attempting to understand today's eqUIty climate. Interpretation in conventlOnal terms recognizes …'!-lhe—6oViousTact .tllatTmaj6rlJ5tlom-;-oc'curetllnKuguSt—nJ82 ,!-'-from hichoint .tIre -major aV'e'F8ges –….-I moved ahead to newall-tIme hIghs. scored as recently as 10 days ago. If the entire move is to be VIewed as the rIsmg phase of a sIngle major-market cycle. that cycle IS now in its 34th month, and historIcal precedent would suggest. first, that the advance is unlikely to contInue much longer in time and. second. that the bulk of the move. some 534 points on the Dow to date, has already been seen. That conventIOnal wisdom, in other words, would call for the recognItIon of a typIcal mature bull market. The problem hes In the Interpretation of the downSWIng WhICh took place between Fall, 1983 and July. 1984. If this relatIvely mild (in most stocks) correctIon IS to be viewed as a major bear market, the cycle which began in 1982 was completed at the end of that correction last Sum- mer, and we find ourselves currently in a bull market less than a year old. One mIght expect to be able to calculate prIce objectives from the existing chart patterns for the averages and deter- mIne which explanation was more hkely to be correct. Unfortunately, this is not all that easy, as the charts below ,Ii ' to ll1USIrIe I!!!, I \ I i ! I ! 'II i,I' ' !'! i ! i 1 I l !i'1 iiHil'HI,1Hi!mIHiIHiiHHH!Hf I' '1'1 I!! , II ii ,I I, i i l I I II 1'1 ,i,.co!Hl!f!IJij!Ht!t'iIH!iilttPil1\f'i!Il, jI I!I'i,Hmli,,'c'iiI Ii , The left-hand chart depicts the DJIA on a five-point-umt basis. If we are deahng with the termmal phase of a bull move, we should expect to read modest upside objectives from more re- cently formed bases and, it IS, mdeed, Just possible to do just this. The base at (C-D) between 1250 and 1280, formed between late March and early this month. proJects, as the chart shows, to 1360. A readmg of the base which preceded the year-end rally (A-B), formed in the 1160-1245 range between August, 1984 and late last year, yields a similar target of 1380. Modest price objectIves such as these appear to reflect the prevailing conventional wisdom in the fmancial community. An earlier base pattern between 1090 and 1180, from early 1984, is shown at (E-F) in the 10-point-unit chart at rIght above. This pattern also suggests a conventIonal sort of upside tar- get at the 1380 level . The dilemma arises from the fact that, if the extent of a major bull market, It would be proper to take a broader reading, centered around the bottom of that Dull market. That bottom must be taken to have occured in July of last year, and the best readmg of the pattern surrounding it comes from the S & P 500 rather than the Dow That index is shown on a two-point-umt chart at rIght, and, viewing June, 1983-January. 1985 as a head-and-shoulders pattern (G-H), –;. it IS pOSSIble to formulate a target as high as 236. The eqUIvalent figure on the Dow would be somewhere 10 the mId-1600's. Quite obVlously, the dIlemma remams unresolved although, as we have emphasized proper Investment policy, at thIS point. should tlt'l t recogmze that the course of least resistance IS upward, removed from current prIces the ultimate upsIde target may be. ANTHONY W. TABELL Jow-Jones IndustrIals (12 00 p. m.) 1307.57 DELAFIELD, HARVEY, TABELL INC. S & P CompOSIte (1200 p.m.) 187.93 CumulatIve Index (5/30/85) 2482.18 No statement or epreSSlon ot opmlon or any other matter herem contained IS or IS to be deemed to be directly or mdlrectly, an offer or the soliCitation 01 an offer to buy or sell any secullty referred toor mentioned The matter IS presented merely for the convenience 01 thesubsCflber While we believe the sources of our mlormatlon to be reltable wo In noway represent or guarantee the accuracy Ihereof nor 01 the statements made herem Any aCllon 10 bo taken by the subSCriber should be based on hiS own investigation and Information Delafield, Harvey, Taoell Inc, as a corporation and Its officers or employees, may now have, or may tater take, POSitionS or trades In respect to any secufltles mentioned In thiS or any lutufe Issue, and such POSition may be dilierent Irom any views nowor heleaf1er expressed m thiS or any other Issue Delafield, Harvey Tabell Inc whIch IS registered With the SECas an Investment adVisor, may give advice to ItS ,vestment adVisory and other customers Independently of any statements made m thiS or In any other ISSue Further InfOrmation on any secuflly mentioned herem Is available on reQuest