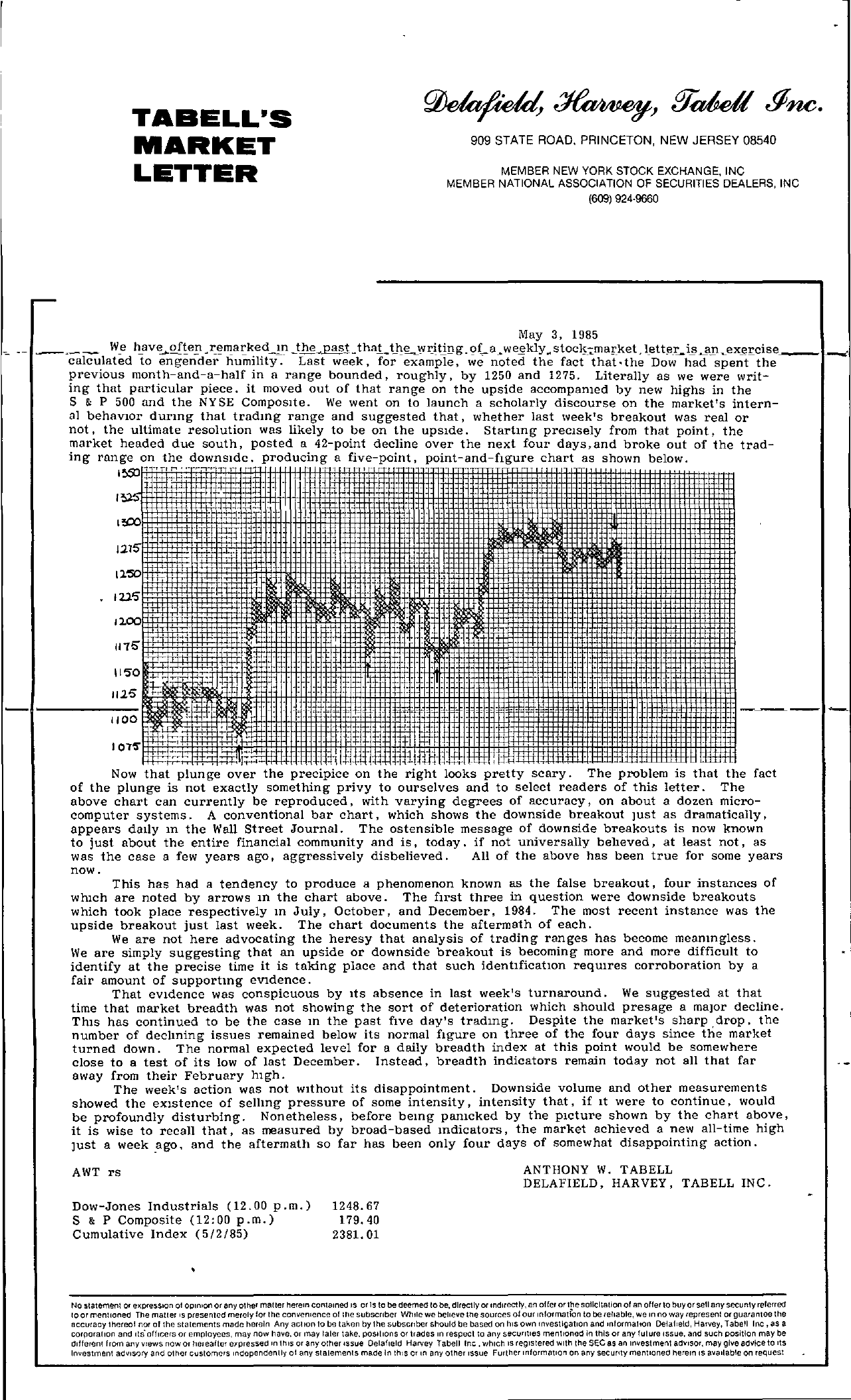 TABELL'S MARKET LETTER 909 STATE ROAD. PRINCETON, NEW JERSEY 08540 MEMBER NEW YORK STOCK EXCHANGE. INC MEMBER NATIONAL ASSOCIATION OF SECURITIES DEALERS, INC (609) 9249660 May 3, 1985 . . – . We hav….of1e!l !a;kedI1thel thaltl!wrliDg. 9\-.a – wekly.. stoc1smatket, letti–1iJlexe!,coS' I-,1 calculated to engender humility. Last week. for example, we noted the fact that-the Dow had spent the previous month-and-a-half in a range bounded, roughly. by 1250 and 1275. Literally as we were writing that particular piece. it moved out of that range on the upside accompanIed by new highs in the S 8 P 500 and the NYSE ComposIte. We went on to launch a scholarly discourse on the market's internal behaVIor durIng that tradIng range and suggested that, whether last week's breakout was real or not. the ultimate resolution was likely to be on the upsIde. Startmg preclsely from that point, the market headed due south, posted a 42-point decline over the next four days,and broke out of the trad- ing range on t,he downsidc. producing a five-point. point-and-figure chart as shown below. II i Now that plunge over the precIpIce on the right looks pretty scary. The problem is that the fact of the plunge is not exactly something privy to ourselves and to select readers of this letter. The above chart can currently be reproduced. with varying degrees of accuracy, on about a dozen microcomputer systems. A conventional bar chart. which shows the downside breakout Just as dramatically, appears dally In the Wall Street Journal. The ostensible message of downside breakouts is now known to just about the entire financial community and is. today. if not universally beheved. at least not. as was the case a few years ago t aggressively disbelieved. All of the above has been true for some years now. This has had a tendency to produce a phenomenon known as the false breakout. four instances of whIch are noted by arrows In the chart above. The fIrst three in question were downside breakouts which took place respectively In July, October, and December. 1984. The most recent instance was the upside breakout just last week. The chart documents the aftermath of each. We are not here advocating the heresy that analysis of trading ranges has become meanIngless. We are simply suggesting that an upside or downside breakout is becoming more and more difficult to identify at the precise time it is taking place and that such identIficatIon reqUIres corroboration by a fair amount of supportIng eVIdence. That eVIdence was conspicuous by Its absence in last week's turnaround. We suggested at that time that market breadth was not showing the sort of deterioration which should presage a major decline. ThIS has continued to be the case In the past fIve day's tradIng. Despite the market'S sharp drop. the number of dechning issues remained below its normal fIgure on three of the four days since the market turned down. The normal expected level for a daily breadth index at this point would be somewhere close to a test of its low of last December. Instead. breadth indicators remain today not all that far away from their February hIgh. The week's action was not WIthout its disappointment. Downside volume and other measurements showed the eXIstence of sellIng pressure of some intensity, intensity that, if It were to continue. would be profoundly disturbing. Nonetheless. before beIng panIcked by the pIcture shown by the chart above, it is wise to recall that. as measured by broad-based Indicators. the market achieved a newall-time high Just a week .ago. and the aftermath so far has been only four days of somewhat disappointing action. AWT rs Dow-Jones Industrials (12.00 p, m,) S & P Composite (1200 p.m.) Cumulative Index (5/2185) 1248.67 179.40 2381. 01 ANTHONY W. TAB ELL DELAFIELD, HARVEY, TABELL INC, … No statement or expresSion of OPInion or any other matter herein contained IS or Is to be deemed to be, directly or indirectly, an offer or the solicitation of an offer to buy or sell any secunty referred toor mentioned The matter IS presented merely for the convenience of the subSCriber While we believe !he sources of our Information to be reliable, we In no way represent orguafantee the accuracy thereat nor of the statements made herein Any action to be taken by the subsCriber should be based on hiS own Investllatlon and mformalton Delafield, Harvey, Tabell Inc, as a corporal Ion and lis officers or employees, may now hae, or may later take, poSItions or trades In respect to any securities mentioned In this or any future Issue, and such position may be dllferent from any views now or hCleafter eypressed In thiS or anyolher Issue Detafletd Harvey Tabell Inc, whIch IS registered WIth the SEC as an Investment adVisor, may give advIce to ItS Investment adVisory and other customers Independently 01 any statements made In Ihls Of m any other Issue Further mformatlon On any security mentioned herem IS available on request