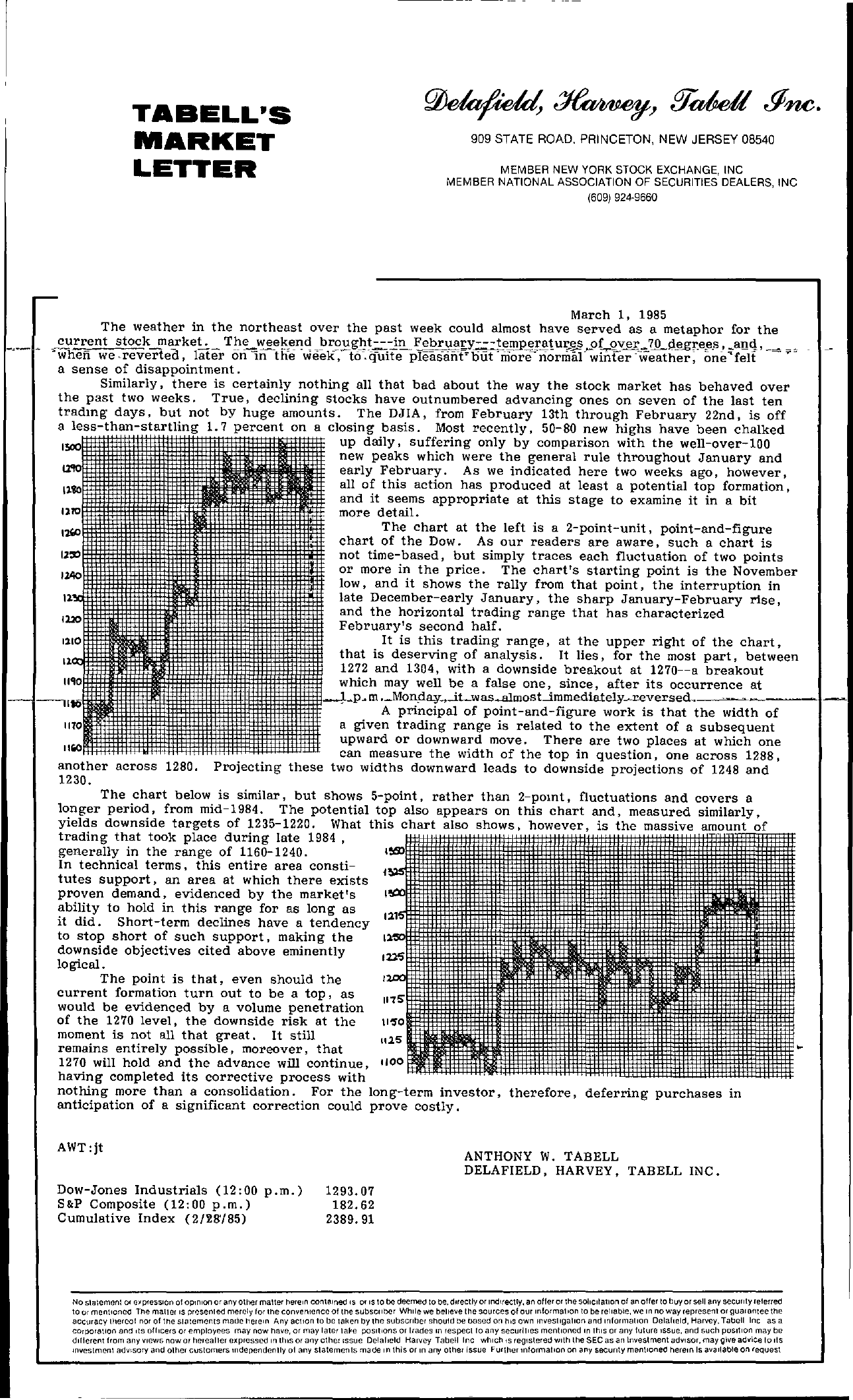 ———— —- TABELL'S MARKET LETTER 909 STATE ROAD. PRINCETON, NEW JERSEY 08540 MEMBER NEW YORK STOCK EXCHANGE, INC MEMBER NATIONAL ASSOCIATION OF SECURITIES DEALERS, INC (609) 9249660 March 1, 1985 The weather in the northeast over the past week could almost have served as a metaphor for the current stock21ke!.. T!tec! !r9J!gE,.! February—t-El.E!!.!Juz;. rof (YEIT'UL.p.!3.zres , an9-. i' when we ,reverted , later on -in Hie weeK. to-.cfuite pleasant'out-more-normal winter-weather, one felt a Sense of disappointment. Similarly, there is certainly nothing all that bad about the way the stock market has behaved over the past two weeks. True, declining stocks have outnumbered advancing ones on seven of the last ten tradmg' days, but not by huge amounts. The DJIA, from February 13th through February 22nd, is off a 1. 7 closing basis. Most recently, 50-80 new highs have been chalked up daily, suffering only by comparison with the well-over-100 new peaks which were the general rule throughout January and early February. As we indicated here two weeks ago, however, all of this action has produced at least a potential top formation, and it seems appropriate at this stage to examine it in a bit more detail. The chart at the left is a 2-point-unit, point-and-figure chart of the Dow. As our readers are aware, such a chart is not time-based, but simply traces each fluctuation of two points or more in the price. The chart's starting point is the November low, and it shows the rally from that point, the interruption in late December-early January, the sharp January-February rise, and the horizontal trading range that has characterized February's second half. It is this trading range, at the upper right of the chart, that is deserving of analysis. It lies, for the most part, between 1272 and 1304, with a downside breakout at 1270–a breakout which may well be a false one, since, after its occurrence at m .. 1.Monp.ay,jL…was……a.lmost..immediately….xeversed . A principal of point-and-figure work is that the width of a given trading range is related to the extent of a subsequent upward or downward move. There are two places at which one can measure the width of the top in question, one across 1288, another across 1280. Projecting these two widths downward leads to downside projections of 1248 and 1230. The chart below is similar, but shows 5-point, rather than 2-pomt, fluctuations and covers a longer period, from mid-1984. The potential top also appears on this chart and, measured similarly, mOliOlillllllytriaedldisngdothwantsitdoeoktaprglaectes doufr1in2g35l-a1t2e201.984W,hat this chart also shows. however is the generally in the range of 1160-1240. In technical terms 1 this entire area consti- tutes support, an area at which there exists proven demand, evidenced by the market's ability to hold in this range for as long as it did. Short-term declines have a tendency to stop short of such support, making the downside objectives cited above eminently logical. The point is that, even should the current formation turn out to be a top, as would be evidenced by a volume penetration of the 1270 level, the downside risk at the moment is not all that great. It still remains entirely possible. moreover, that 1270 will hold and the advance will continue, having completed its corrective process with nothing more than a consolidation. For the long-term investor, therefore, deferring purchases in anticipation of a significant correction could prove costly. AWTjt Dow-Jones Industrials (1200 p.m.) S&P Composite (1200 p.m.) Cumulative Index (2/28'/85) 1293.07 182.62 2389.91 ANTHONY W. TAB ELL DELAFIELD, HARVEY, TAB ELL INC. No statement Of 131preSSlon 01 oplnlOO Of any other mailer herem contained IS Of IS to be deemed \0 be, dIrectly or Indlreclly, an offer or the solicitation of an offer to buy or sell any seCUf!ty ret erred to or mentioned The mailer IS prcsented merely for the convenmnccof the subscnbor While we believe the sources of our information 10 be reliable, we In noway represent or guarantee the accuraCy tllercot nor of ttm slllements made tier em Any action to be taken by the subscf!ber should be blsed on hiS own investigation and information Delafmld, Harvey, Tabell Inc as a COrporation and Its officers or employees may now have, or may tater lae poSitions or trades !f) respect to any securities mentioned In thiS or any lulure ISSue, and such pOSition may be dillereni from any views nowor hereafter exprcssod!f) thiS or any othor Issue Dolaflctd Harvey Tabelt Inc whiCh IS registered With the SEC as an Investment adVisor, may gIve adviCe to Its lflvestment adVISOry and other customers mdependently of any statements made In this or In any other Issue Further mformatlOn on any secuflty mentioned herem Is available on request