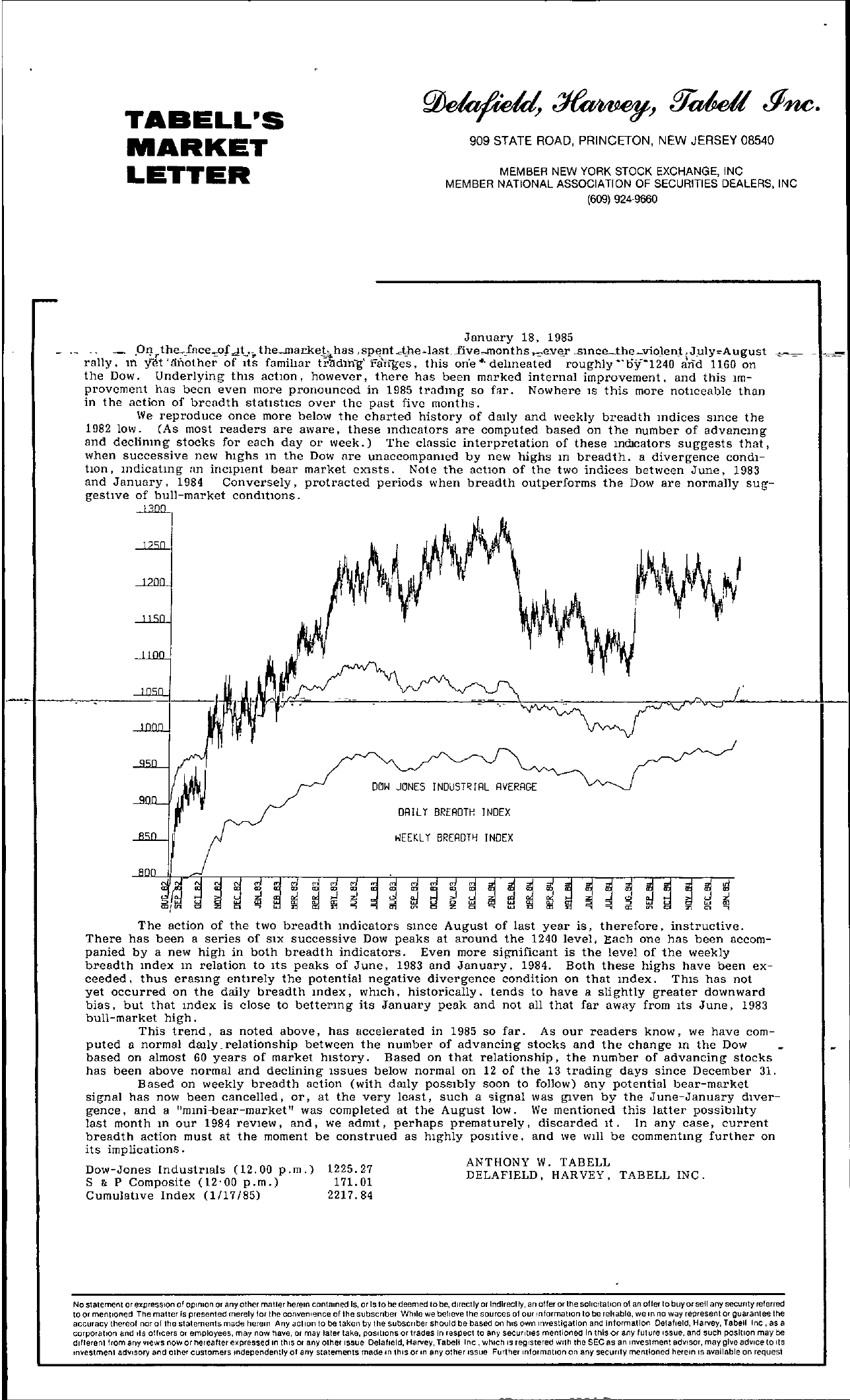 TABELL'S MARKET LETTER 909 STATE ROAD, PRINCETON, NEW JERSEY 08540 MEMBER NEW YORK STOCK EXCHANGE, INC MEMBER NATIONAL ASSOCIATION OF SECURITIES DEALERS, INC (609) 924-9660 January 18, 1985 — -.oI).,. theJflce.pf dt.,. the…..marke4 has ,spnt t,.-he …last fiv–'llonths —e..vr smcethevioJenJ. J .uly-A ugust rally. 11'1 yet'iIi.other of Its familIar trndlh'g' raffg-es. this on'e'delmeated roughly …oy.. 1240 rid 1160 on the Dow. Underlying thIS achon, however, there has been marked internal improvement, and this Improvement has been even more pronounced in 1985 tradmg so far. Nowhere 15 this more noticeable than in the action of breadth statIstIcs over the past five months. We reproduce once more below the charted history of dally and weekly breadth mdices SInce the 1982 low. (As most readers are aware, these mdIcators are computed based on the number of advancmg and declimng stocks for each day or week.) The classic interpretation of these mdIcators suggests that, when successive new hIghs In the Dow are unaccompanIed by new highs In bread1h. a divergence condItIon, mdicatmg an incIpIent bear market eXIsts. Note the actlOn of the two indices between June, 1983 and January, 1984 Conversely, protracted periods when breadth outperforms the Dow are normally suggestIve of bull-market condltlons. -L3illL 1 I M I DOW JONES INDUSTIAL AVERAGE DAILY BREADTM INDEX EEKLY BREADT INDEX The action of the two breadth mdicators smce August of last year is, therefore, instructive. There has been a series of SIX successive Dow peaks at around the 1240 level. Each one has been accom- panied by a new high in both breadth indicators. Even more significant is the level of the weekly breadth mdex m relation to Its peaks of June, 1983 and January, 1984. Both these highs have been ex- ceeded, thus erasIng entIrely the potential negative divergence condition on that mdex. ThIS has not yet occurred on the daily breadth mdex, WhICh. historically. tends to have a slightly greater downward bias. but that mdex is close to bettermg its January peak and not all that far away from Its June, 1983 bull-market high, This trend, as noted above, has accelerated in 1985 so far. As our readers know, we have com- puted a normal druly relationship between the number of advancing stocks and the change m the Dow based on almost 60 years of market hIstory. Based on that relationship, the number of advancing stocks has been above normal and declining Issues below normal on 12 of the 13 trading days since December 31. Based on weekly breadth action (with druly pOSSIbly soon to follow) any potential bear-market signal has now been cancelled, or, at the very least, such a '3ignal was gIven by the June-January dIver- gence. and a tl mmi-bear-market was completed at the August low. We mentioned this latter possibIlIty last month In our 1984 reVIew, and, we admIt, perhaps prematurely. discarded It. In any case, current breadth action must at the moment be construed as hIghly posItive, and we WIll be commentmg further on its implications. Dow-Jones IndustrIals (12.00 p.m,) 1225.27 S & P Composite (12'OD p.m.) 171. 01 ANTHONY W. TAB ELL DELAFIELD, HARVEY, TABELL INC CumulatIve Index (1117/85) 2217.84 No statement or eKpreSSlon of OJIln1on or any other matter herem contained Is, or Is to be deemed to be, directly or Indirectly, an oller or the soliCitation of an oller to buyor sell any security referred toor mentioned The matter Is presented merely tor Ihe convenience of the subSCriber While we believe the sources of our information tobe reliable, we 111 no way represent or guarantee the accuracy thereol norofthe statements made herein Any aCllon 10 be taken by Ihe subSCriber should be based on hiS own investigation and Information Delafield, Harvey, TabeH Inc, as a corporation and Its oltlcers or employees, may now have, or may later take, pOSitIOns or trades In respect to any securities mentioned In this or any future Issue, and such position may be dlnerent from any Ylews now or haleafter expressed In Ihls or any other Issue Delafield, Harvey, Tabell Inc, which IS registered With the SEC as an If'Ivestment adVisor, may give advice to liS Investment adVISOry and othel' customers mdependenlly of any statements made In thiS or m any other Issue Further mformatlon on any security mentioned herein IS ayallable on request