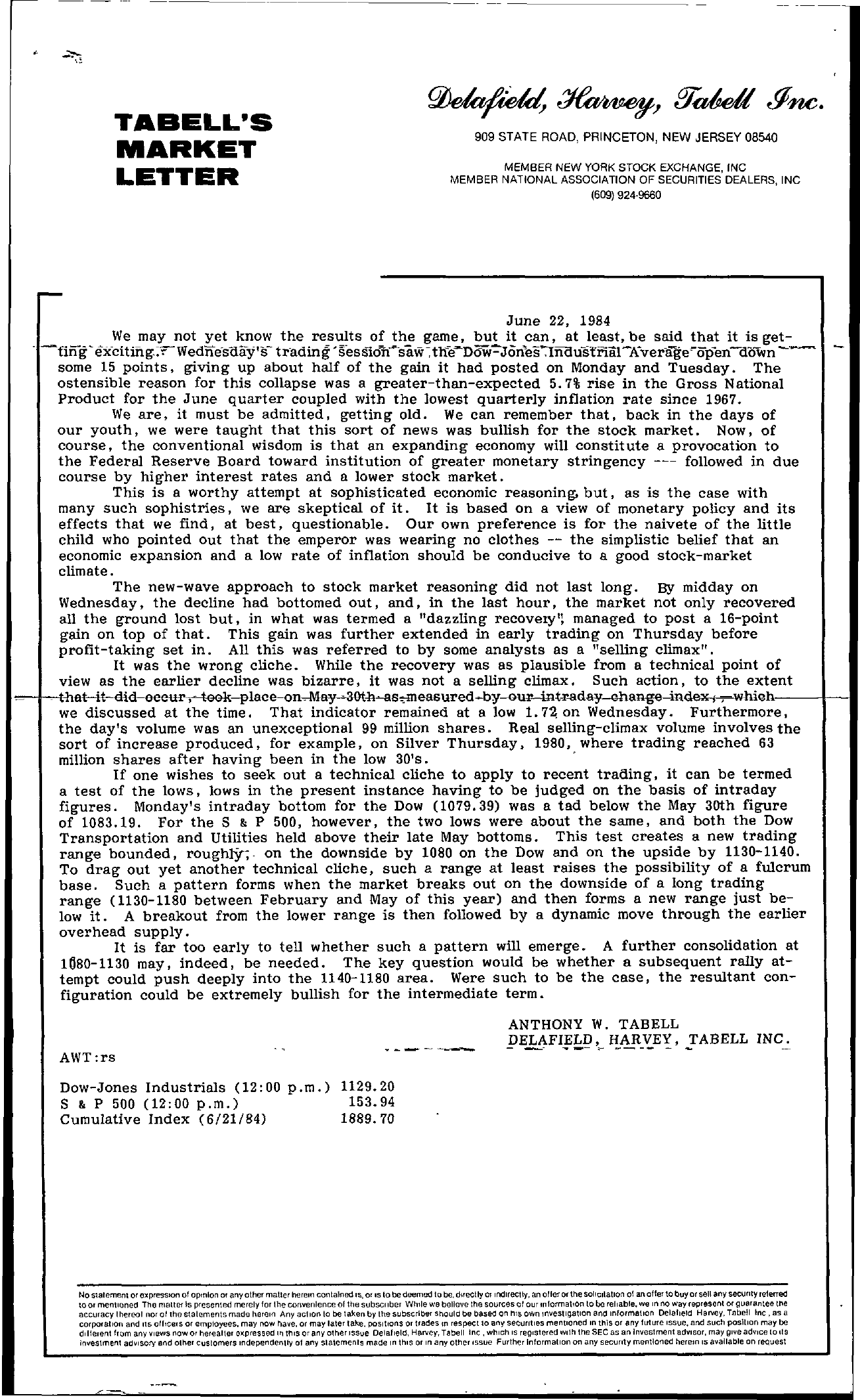 TABELL'S MARKET LETTER ——————– — —— 909 STATE ROAD, PRINCETON, NEW JERSEY 08540 MEMBER NEW YORK STOCK EXCHANGE, INC MEMBER NATIONAL ASSOCIATION OF SECURITIES DEALERS, INC (609) 924-9660 June 22, 1984 We may not yet know the results of the game, but it can, at least, be said that it is get- – -mrg -eJ(citifig3- Wednesoay'lr trading' resS-ion saw the-DOwJon'es–Inausti'iiil-Kverage-opEm-down – – some 15 points, giving up about half of the gain it had posted on Monday and Tuesday. The ostensible reason for this collapse was a greater-than-expected 5.7 rise in the Gross National Product for the June quarter coupled with the lowest quarterly inflation rate since 1967, We are, it must be admitted, getting old. We can remember that, back in the days of our youth, we were taught that this sort of news was bullish for the stock market. Now, of course, the conventional wisdom is that an expanding economy will constitute a provocation to the Federal Reserve Board toward institution of greater monetary stringency — followed in due course by higher interest rates and a lower stock market. This is a worthy attempt at sophisticated economic reasoning, but, as is the case with many such sophistries, we are skeptical of it. It is based on a view of monetary policy and its effects that we find, at best, questionable. Our own preference is for the naivete of the little child who pointed out that the emperor was wearing no clothes — the simplistic belief that an economic expansion and a low rate of inflation should be conducive to a good stock-market climate. The new-wave approach to stock market reasoning did not last long. By midday on Wednesday, the decline had bottomed out, and, in the last hour, the market not only recovered all the ground lost but, in what was termed a dazzling recovery'! managed to post a 16-point gain on top of that. This gain was further extended in early trading on Thursday before profit-taking set in. All this was referred to by some analysts as a selling climax. It was the wrong cliche. While the recovery was as plausible from a technical point of view as the earlier decline was bizarre, it was not a selling climax. Such action, to the extent –4.h,atG-eeeurk-place-onayseasured-by-our-4ntday-Ohang-indexwich——–II we discussed at the time. That indicator remained at a low 1. 7 on Wednesday. Furthermore, the day's volume was an unexceptional 99 million shares. Real selling-climax volume involves the sort of increase produced, for example, on Silver Thursday, 1980, where trading reached 63 million shares after having been in the low 30's. If one wishes to seek out a technical cliche to apply to recent trading, it can be termed a test of the lows, lows in the present instance having to be judged on the basis of intraday figures. Monday's intraday bottom for the Dow (1079.39) was a tad below the May 30th figure of 1083.19. For the S P 500, however, the two lows were about the same, and both the Dow Transportation and Utilities held above their late May bottoms. This test creates a new trading range bounded, roughly-;- on the downside by 1080 on the Dow and on the upside by 1130-1140. To drag out yet another technical cliche, such a range at least raises the possibility of a fulcrum base. Such a pattern forms when the market breaks out on the downside of a long trading range (1130-1180 between February and May of this year) and then forms a new range just below it. A breakout from the lower range is then followed by a dynamic move through the earlier overhead supply. It is far too early to tell whether such a pattern will emerge. A further consolidation at 1180-1130 may, indeed, be needed. The key question would be whether a subsequent rally attempt could push deeply into the 1140-1180 area. Were such to be the case, the resultant con- figuration could be extremely bullish for the intermediate term. AWTrs v — ANTHONY W. TABELL — — — -DELAFIELD, HARVEY, TABELL INC. – -.. — – – – Dow-Jones Industrials (12 00 p.m.) 1129.20 S P 500 (12 00 p. m.) 153.94 Cumulative Index (6/21/84) 1889.70 No statement or epresslOn of opinion or any other mailer herein contained IS, Of IS to be deemed to be, directly 01 indirectly. an oller or the soliCitation of an offer to buyor sen any secunty relerred toor mentioned The matter Is presented merely for Ihe convenience of Ihe subscriber While we believe the sources 01 ourrnformallon 10 be reliable, we In no way represent or guarantee tM accuracy theroot nor 01 the statements made hereM Any acllon to be taken by the subscriber Should be based on hIS own IrIvestlgatlon and IrIformallon Delafield Harvey, Tabell Inc, as a corporation and liS ofhcers or employees, may now have, or may laler take, positions or trades m respect to any secUrities mentioned m this or any future Issue, and such pos1\lon may be different from any views now or hereafter c)(presscd IIllhls or any other Issue Delafield, Harvey, Tabell Inc, which IS registered With the SEC as an Investment adVisor, may glyeadvlce to Its Investment adYlsory and olher customers mdependently 01 any statements made In thiS or In any other ISSue Furlher Information on any security mentioned herem IS available on reQuest