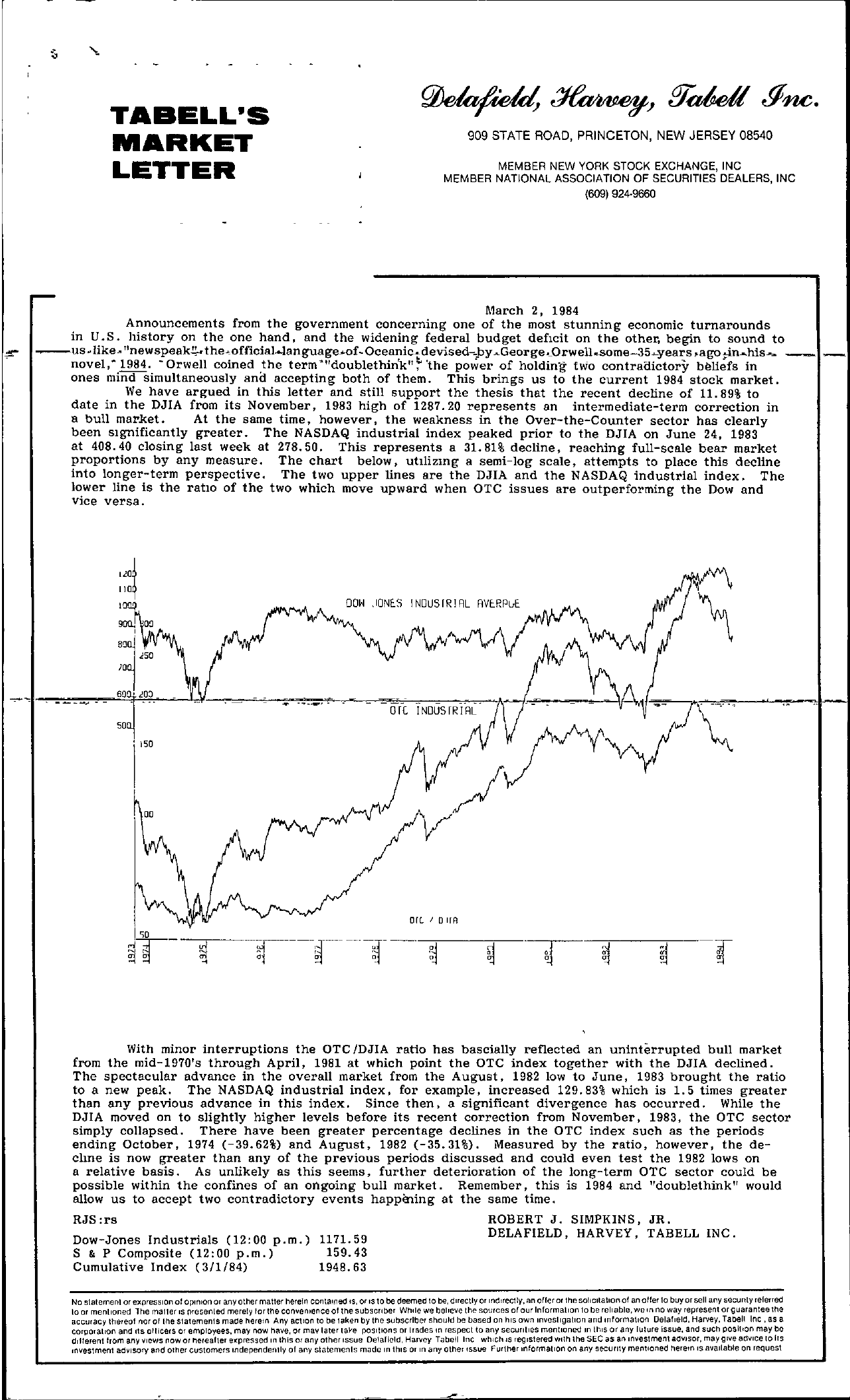 TABELL'S MARKET LETTER 909 STATE ROAD, PRINCETON, NEW JERSEY 08540 MEMBER NEW YORK STOCK EXCHANGE, INC MEMBER NATIONAL ASSOCIATION OF SECURITIES DEALERS, INC (609) 9249660 March 2, 1984 Announcements from the government concerning one of the most stunning economic turnarounds in U. S. history on the one hand. and the widening federal budget defIcit on the other. begin to sound to – u s .. like Tlnewspeak t he-'official…J.anguageof Oceanic.. devised-py ,,-George JO rwellsome-35-,-years ,.ago ;In–..his novel,' 1984. -Orwell coined ,the termtrdoublethin'kn 'the power of holding two contrailictory beliefs in ones mind Simultaneously and accepting both of them. This brings us to the current 1984 stock market. We have argued in this letter and still support the thesis that the recent decline of 11. 89 to date in the DJIA from its November, 1983 high of 1287.20 represents an intermediate-term correction in 8 bull market. At the same time. however. the weakness in the Over-the-Counter sector has clearly been sIgnificantly greater. The NASDAQ industrial index peaked prior to the DJIA on June 24. 1983 at 408.40 closing last week at 278.50. This represents a 31. 81 decline. reaching full-scale bear market proportions by any measure. The chart below, utIlizIng a semi-log scale. attempts to place this decline into longer-term perspective. The two upper lines are the DJIA and the NASDAQ industrial index. The lower line is the ratIo of the two which move upward when OTe issues are outperforming the Dow and vice versa. DOW ,IONlS INOUSIRIRL RVlRPGl 00 Oft/OIlR With minor interruptions the OTe IDJIA ratio has bascially reflected an uninterrupted bull market from the mid-1970's through April. 1981 at which point the OTC index together with the DJIA declined. The spectacular advance in the overall market from the August. 1982 low to June, 1983 brought the ratio to a new peak. The NASDAQ industrial index, for example, increased 129.83 which is 1. 5 times greater than any previous advance in this index. Since then, a significant divergence has occurred. While the DJIA moved on to slightly higher levels before its recent correction from November, 1983. the aTe sector simply collapsed. There have been greater percentage declines in the OTe index such as the periods ending October, 1974 (-39.62) and August. 1982 (-35.31). Measured by the ratio. however, the dechne is now greater than any of the previous periods discussed and could even test the 1982 lows on a relative basis. As unlikely as this seems, further deterioration of the long-term OTC sector could be possible within the confines of an ongoing bull market. Remember, this is 1984 and doublethink would allow us to accept two contradictory events happming at the same time. RJS rs Dow-Jones Industrials (1200 p.m.) 1171. 59 S & P Composite (1200 p.m.) 159.43 Cumulative Index (3/1/84) 1948.63 ROBERT J. SIMPKINS. JR. DELAFIELD, HARVEY, TABELL INC. No statement or expresSion of opinion or any other matter hereIn contained IS, or IS to be deemed 10 be, directly or indirectly, an offer or the soliCitation of an offer to buyor sell any secunty referred to or mentioned The mal1er IS prcsented merely forthe convenlenceot the subscriber While we believe the sources of our Information to be reliable, weln no way represent orguaranleethe accuracy thereof nor of the Statements made herein Any action to be taken by the subscriber Should be based on hiS own InveStigation and Inlormatlon Delafield, Harvey, labell Inc, as a corporation and Its officers or employees, may now have, or mav later taye POSitions or trades In respect to any seCUrities mentioned In thiS or any luture Issue, and such positIOn may be different from any views nower hereafter e)(pressed In this or any other Issue Oelafleld, Harvey labell Inc which IS registered With the SEC as an Investment adVisor, may give adVice to Its Investment adVISOry and other customers Independently of any statements made In thiS or In any other ISSue Further Information on any security mentioned herem IS available on reQuest