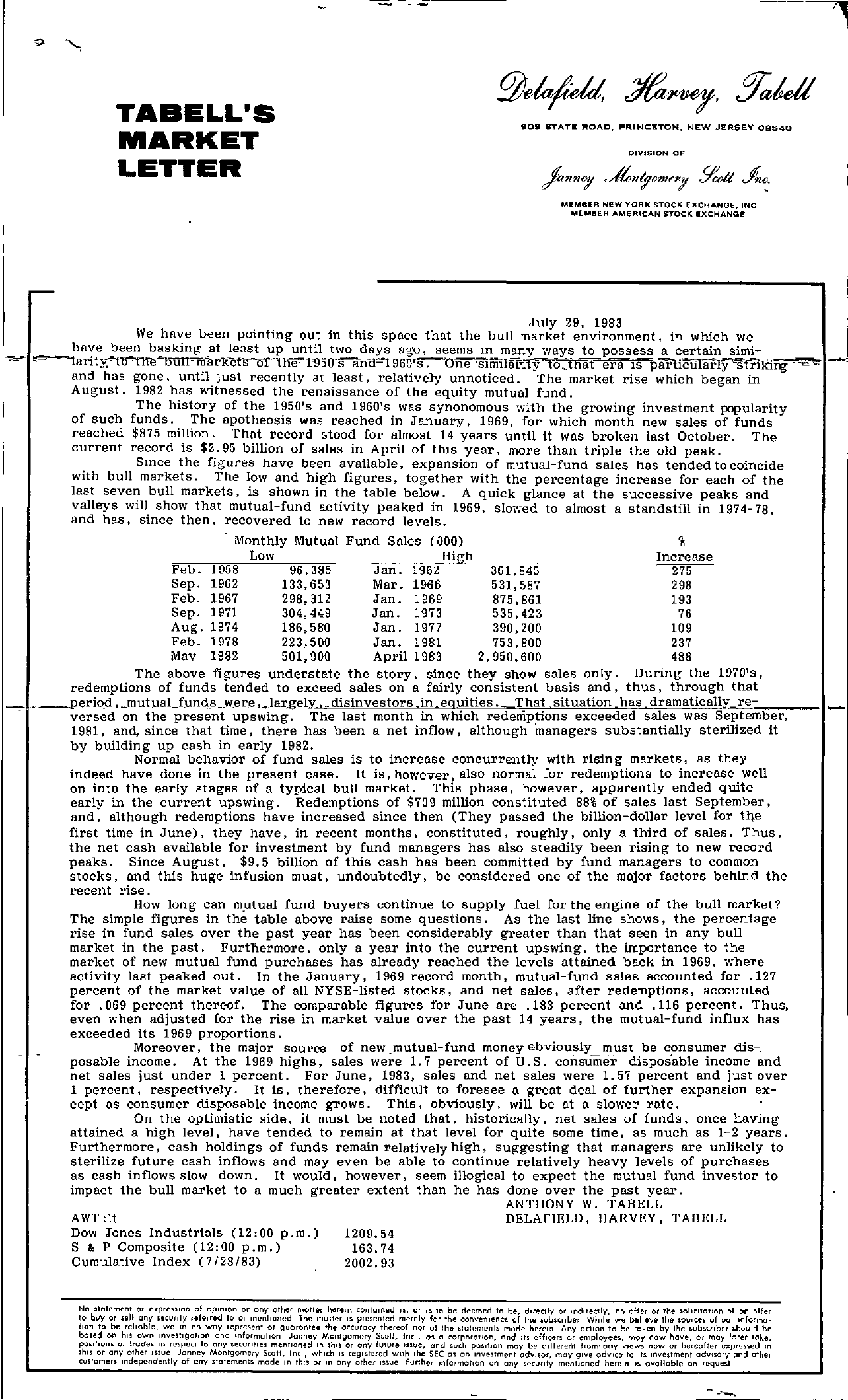 TABELL'S MARKET LETTER / 909 STATE ROAD, PRINCETON, NEW JERSEY 08540 DIVISION OF MEMBER NEW VORK STOCK EXCHANGE, INC MEMBER AMERICAN STOCK eXCHANGE July 29, 1983 We have been pointing out in this space that the bull market environment, ill which we hare been basking at least up until two days ago, seems In many ways to possess a certain simi—-1al'lty,'1ll11TeoUlI- .'Ketlrof-the' l'!r5WSilnaT96U'S;–One'Siiiiilantyt03hat era is-particularIy -stMRi'''rg.,….-…,…,l – and has gone. unhl Just recently at least, relatively unnoticed. The market rise which began in August, 1982 has witnessed the renaissance of the equity mutual fund. The history of the 1950's and 1960's was synonomous with the growing investment popularity of such funds. The apotheosis was reached in January, 1969, for which month new sales of funds reached 875 million. That record stood for almost 14 years until it was broken last October. The current record is 2.95 billion of sales in April of thIS year, more than triple the old peak. SInce the figures have been available, expansion of mutual-fund sales has tended to coincide with bull markets. The low and high figures, together with the percentage increase for each of the last seve bull markets, is shown in the table below. A quick glance at the successive peaks and valleys wlll show that mutual-fund activity peaked in 1969, slowed to almost a standstill in 1974-78, and has. since then. recovered to new record levels. Monthly Mutual Fund Sales (000) Low High Feb. 1958 96,385 Jan. 1962 361,845 Sep. 1962 133,653 Mar. 1966 531,587 Feb. 1967 298,312 Jan. 1969 875,861 Sep. 1971 304,449 Jan. 1973 535,423 Aug. 1974 186,580 Jan. 1977 390,200 Feb. 1978 223,500 Jan. 1981 753,800 May 1982 501,900 April 1983 2,950,600 Increase 275 298 193 76 109 237 488 The above figures understate the story, since they show sales only. During the 1970's, redemptions of funds tended to exceed sales on a fairly consistent basis and, thus, through that 1.,… lteriQli,.mutual funds were, largely, .disinvestors versed on the present upswing. The last month in in equities. That.situation has which redemptions exceeded dramatical!y re— sales was September, I 1981, and, since that time, there has been a net inflow, although managers substantially sterilized it by building up cash in early 1982. Normal behavior of fund sales is to increase concurrently with risin g markets, as they indeed have done in the present case. It is, however, also normal for redemptions to increase well on into the early stages of a typical bull market. This phase, however, apparently ended quite early in the current upswing. Redemptions of 709 million constituted 88 of sales last September, and, although redemptions have increased since then (They passed the billion-dollar level for the first time in June), they have, in recent months, constituted, roughly, only a third of sales. Thus, the net cash available for investment by fund managers has also steadily been rising to new record peaks. Since August, 9.5 billion of this cash has been committed by fund managers to common stocks, and this huge infusion must, undoubtedly, be considered one of the major factors behind the recent rise. How long can m.utual fund buyers continue to supply fuel for the engine of the bull market The simple figures in the table above raise some questions. As the last line shows, the percentage rise in fund sales over the past year has been considerably greater than that seen in any bull market in the past. Furthermore, only a year into the current upswing, the importance to the market of new mutual fund purchases has already reached the levels attained back in 1969, where activity last peaked out. In the January, 1969 record month, mutual-fund sales accounted for .127 percent of the market value of all NYSE-listed stocks, and net sales, after redemptions, accounted for .069 percent thereof. The comparable figures for June are .183 percent and .116 percent. Thus, even when adjusted for the rise in market value over the past 14 years, the mutual-fund influx has exceeded its 1969 proportions. Moreover, the major source of new mutual-fund money Ibviously must be consumer dis- posable income. At the 1969 highs, sales were 1.7 percent of U.S. consumer dispos-able income and net sales just under 1 percent. For June, 1983, sales and net sales were 1. 57 percent and just over 1 percent, respectively. It is, therefore, difficult to foresee a great deal of further expansion ex- cept as consumer disposable income grows. This, obviously. will be at a slower rate. On the optimistic side, it must be noted that, historically, net sales of funds, once having attained a high level, have tended to remain at that level for quite some time, as much as 1-2 years. Furthermore, cash holdings of funds remain l'elatively high, suggesting that managers are unlikely to sterilize future cash inflows and may even be able to continue relatively heavy levels of purchases as cash inflows slow down. It would, however. seem illogical to expect the mutual fund investor to impact the bull market to a much greater extent than he has done over the past year. ANTHONY W. TAB ELL AWT1t DELAFIELD, HARVEY, TABELL Dow Jones Industrials (12 00 p. m.) S & P Composite (1200 p.m.) Cumulative Index (7/28/83) 1209.54 163.74 2002.93 No statement or expression of opinion or ony olher motter herein contolned IS, or IS to be deemed to be, d,rectly or ,directly, on offer or the 501,cltotlon of on offer to bvy or sell any security referred 10 or mentioned The matler IS presented merely for the conVenlenCf. of the subscriber While we believe the sources of our Informa tion to be reliable, we In no way represent or guarantee the accurocy thereof nor of the STatements mude herein Any action to be tohm by the subscriber shovld be based on hiS own Invesllgo!ton and Information Jonney Montgomery Scot!, Inc, as 0 corporatIon, and lIs OfflCNS or employees, moy now have, or may later toke, pOlllons or trodes In respect to any seWfllles mentioned In th,s or ony futvre 1ssue, and svch POSitIon may be different from- ooy views now or hereafter expressed In rhls or any olher Issue Jonney Montgomery Soott, Inc, whICh IS registered WITh the SEC as on Investment adVIsor, moy give odvlce to lIs Investment odvlsory and othel customers Independently of any stotements mode In th,s or In ony other Issue Further information on ony security menlloned herem IS ovalloble on request