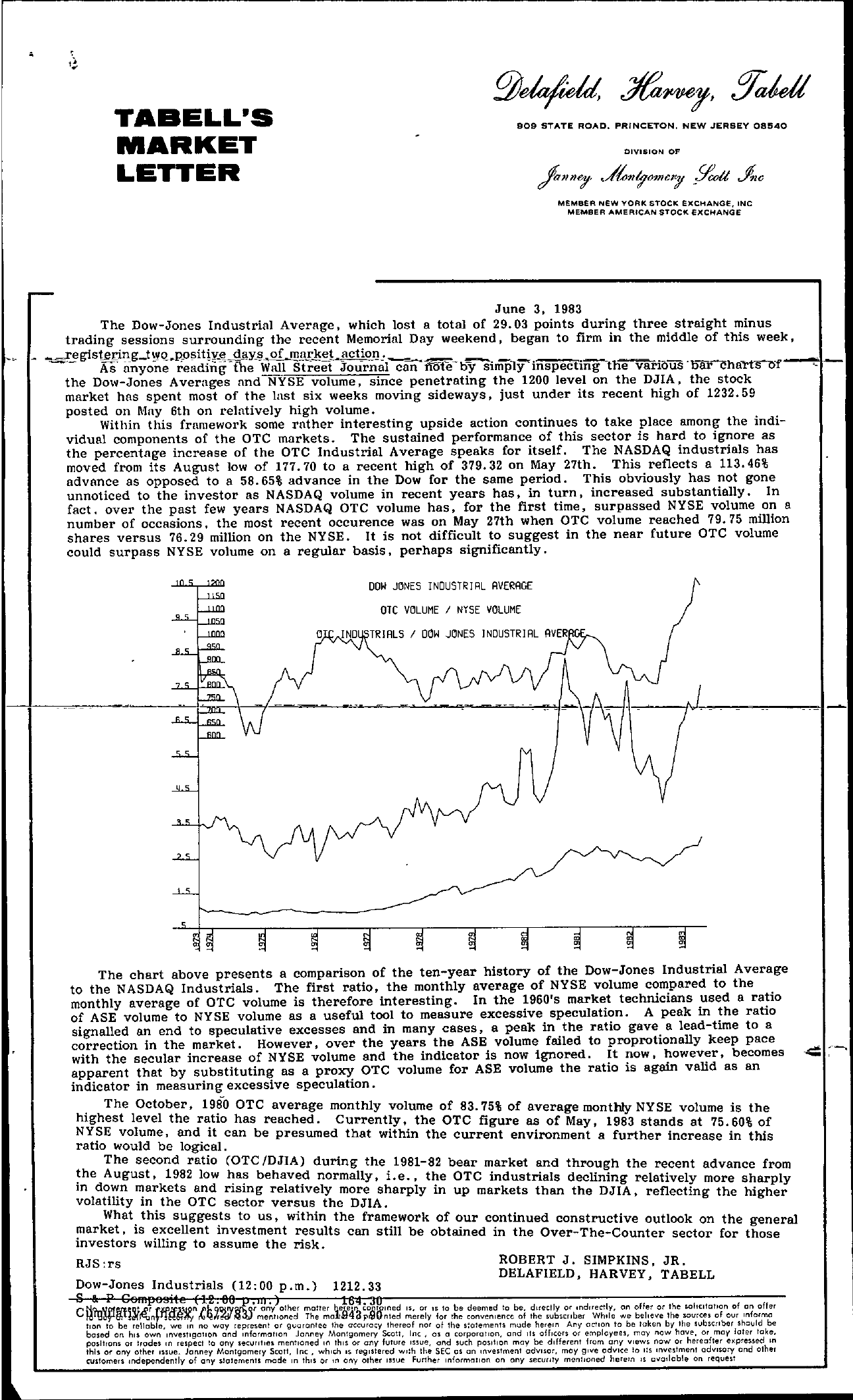 TABELL'S MARKET LETTER 909 STATE ROAD. PRINCETON, NEW JERSEY 08540 DIVISION OF MEMBER NEW YORK STOCK eXCHANGE, INC MEMBER AMERICAN STOCK eXCHANGE June 3, 1983 The Dow-Jones Industrial Average, which lost a total of 29.03 points during three straight minus trading sessions surrounding the recent Memorial Day weekend, began to firm in the middle of this week, –registedngt\Yo ..p9sitiye..s!1!Ys of IDtlrket – – As' anyone reading-the -wnnstreet action. Journal can'nofi,-bysimplyinspecling tne variomn5ar chartsof– the Dow-Jones Averages and NYSE volume, since penetrating the 1200 level on the DJIA, the stock market has spent most of the last six weeks moving sideways, just under its recent high of 1232.59 posted on May 6th on relatively high volume. Within this framework some rnther interesting upside action continues to take place among the indi- vidual components of the OTC markets. The sustained performance of this sector is hard to ignore as the percentage increase of the OTC Industrial Average speaks for itself. The NASDAQ industrials has moved from its August low of 177.70 to a recent high of 379.32 on May 27th. This reflects a 113.46 advance as opposed to a 58.65 advance in the Dow for the same period. This obviously has not gone unnoticed to the investor as NASDAQ volume in recent years has, in turn, increased substantially. In fact. over the past few years NASDAQ OTC volume has, for the first time, surpassed NYSE volume on a number of occasions, the most recent occurence was on May 27th when OTC volume reached 79.75 million shares versus 76.29 million on the NYSE. It is not difficult to suggest in the near future OTC volume could surpass NYSE volume on a regular basis, perhaps significantly. DOW JONES INDUSTRIRL RVERRGE OTC VOLUME I NrSE VOLUME The chart above presents a comparison of the ten-year history of the Dow-Jones Industrial Average to the NASDAQ Industrials. The first ratio, the monthly average of NYSE volume compared to the monthly average of OTC volume is therefore interesting. In the 1960's market technicians used a ratio of ASE volume to NYSE volume as a useful tool to measure excessive speculation. A peak in the ratio signalled an end to speculative excesses and in many cases, a peak in ,the ratio gave, a lead-time to a correction In the market. However, over the years the ASE volume fruled to proprotlonally keep pace with the secular increase of NYSE volume and the indicator is now ignored. It now I however I becomes apparent that by substituting as a proxy OTC volume for ASE volume the ratio is again valid as an -d .—., indicator in measuring excessive speculation. . The October, 190 OTC average monthly volume of 83.75 of average monthly NYSE volume is the hIghest level the rtlO has reached. Currently, the OTC figure as of May, 1983 stands at 75.60 of NYE volume, and. It can be presumed that within the current environment a further increase in this ratlo would be lOgIcal. The second ratio (OTC IDJIA) during the 1981-82 bear market and through the recent advance from he August, 1982 low ha behave normally, i.e., the OTC industrials declining relatively more sharply m d,,n arkets and rIsmg relatlvely more sharply in up markets than the DJIA, reflecting the higher volatllity m the OTC sector versus the DJIA. What. this sugges.ts to us, within the framework of our continued constructive outlook on the general arket, IS 7x.cellent mvestment results can still be obtained in the Over-The-Counter sector for those Investors wllhng to assume the risk. RJS rs Dow-Jones Industrials (12 00 p.m.) 1212.33 ROBERT J. SIMPKINS, JR. DELAFIELD, HARVEY, TABELL ScN'M&\'PmI;CQte.mRrpfe'sJittAe\l9n( 1I'2h.q8lX8rypQ.rI Ia ni .y)o t n e r motter 164.30 be.r.c4'r)..co.RWlned IS, or IS to be deemed to be, directly or ondrrectly, on offer or Ihe IICllotlon of on offer !-6''!jW6'rMntJo51t'1'y r\!Qredf!Q-bI mentioned The moLH iSrMUnted merely for the convenience of Ihe subscriber While we believe the sources of our Informa tlon to be reliable, we In na way represent or guarantee the accuracy thereof nor of the s;alemenlS mude herein Any actIOn to be token by the subSCriber should be based on hiS own Investlgallon and ,nformat,on Janney Montgomery Scott, Inc, os a corporar,on, and Its offICers or employees, may now have, or may later toke, posilions or !rodeS In respect to any securities mentioned In thiS or any future Issue, ond such POSition may be different from any views now or hereafter e)(pressed In this or any other Issue. Janney Montgomery Scott, Inc, which IS registered wllh the SEC as on Investment adVisor, may give odvlce to IS Investment adVISOry and other customers mdependently of any stolements mode In thiS or III any OTher nsue Further IIlformollon on ony secunty mentioned herem IS available on request