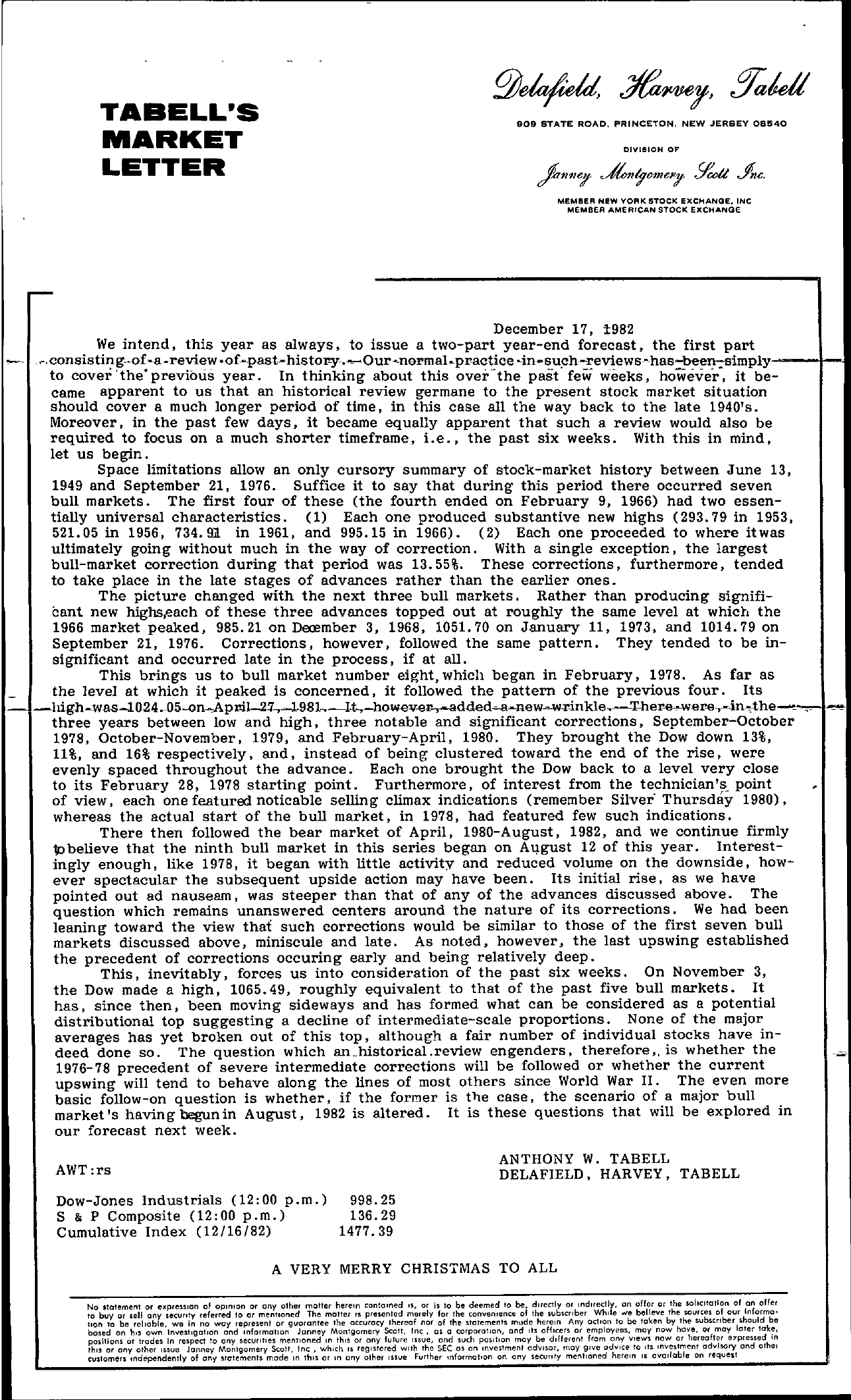 TABELL'S MARKET LETTER 909 STATE ROAD, PRINCETON, NEW JERSEY 08!540 DIYISION OF MEMBER NEW VORK STOCK EXCHANGE, INC MEMBER AMERICAN STOCI( EXCHANGE – December 17, 1982 We intend, this year as always, to issue a two-part year-end forecast, the first part – , consisti'.! g-ofa -reviw of-past-histol'y-.-Our-normalpl'actice -in-suh-reviws-'-has-been-simply–.\- to cover 'the' previous year. In thinking about this overthe past few weeks, however, it be- came apparent to us that an historical review germane to the present stock market situation should cover a much longer period of time, in this case all the way back to the late 1940's. Moreover, in the past few days, it became equally apparent that such a review would also be required to focus on a much shorter timeframe, i.e., the past six weeks. With this in mind, let us begin. Space limitations allow an only cursory summary of stock-market history between June 13, 1949 and September 21, 1976. Suffice it to say that during this period there occurred seven bull markets. The first four of these (the fourth ended on February 9, 1966) had two essen- tially universal characteristics. (1) Each one produced SUbstantive new highs (293.79 in 1953, 521. 05 in 1956, 734.91 in 1961, and 995.15 in 1966). (2) Each one proceeded to where it was ultimately going without much in the way of correction. With a single exception, the largest bull-market correction during that period was 13.55. These corrections, furthermore, tended to take place in the late stages of advances rather than the earlier ones. The picture changed with the next three bull markets. Rather than producing signifi- cant new highs,each of these three advances topped out at roughly the same level at which the 1966 market peaked, 985.21 on December 3, 1968, 1051. 70 on January 11, 1973, and 1014.79 on September 21, 1976. Corrections, however, followed the same pattern. They tended to be in- significant and occurred late in the process, if at all. This brings us to bull market number eight, which began in February, 1978. As far as the level at which it peaked is concerned, it followed the pattern of the previous four. Its lligJl–was1024.05-On…,ApciJ-2'7,…..J..981..It,howv.er-.-addd–neww.tinkle,-'f-hel'e—wl'e,-inthe-.4-….. three years between low and high, three notable and significant corrections, September-October 1978, October-November, 1979, and February-April, 1980. They brought the Dow down 13, 11, and 16 respectively, and, instead of being clustered toward the end of the rise, were evenly spaced throughout the advance. Each one brought the Dow back to a level very close to its February 28, 1978 starting point. Furthermore, of interest from the technician's. point of view, each one featured noticable selling climax indications (remember Silver Thursday 1980), whereas the actual start of the bull market, in 1978, had featured few such indications. There then followed the bear market of April, 1980-August, 1982, and we continue firmly 1) believe that the ninth bull market in this series began on Agust 12 of this year. Interest- ingly enough, like 1978, it began with little activity and reduced volume on the downside, how- ever spectacular the subsequent upside action may have been. Its initial rise, as we have pointed out ad nauseam, was steeper than that of any of the advances discussed above. The question which remains unanswered centers around the nature of its corrections. We had been leaning toward the view that such corrections would be similar to those of the first seven bull markets discussed above, miniscule and late. As noted, however, the last upswing established the precedent of corrections occuring early and being relatively deep. This, inevitably, forces us into consideration of the past six weeks. On November 3, the Dow made a high, 1065.49, roughly equivalent to that of the past five bull markets. It has, since then, been moving sideways and has formed what can be considered as a potential distributional top suggesting a decline of intermediate-scale proportions. None of the major averages has yet broken out of this top, although a fair number of individual stocks have indeed done so. The question which an.historical.review engenders, therefore is whether the 1976-78 precedent of severe intermediate corrections will be followed or whether the current – upswing will tend to behave along the lines of most others since World War II. The even more basic follow-on question is whether, if the former is the case, the scenario of a major bull market's having begun in August, 1982 is altered. It is these questions that will be explored in our forecast next week. AWTrs ANTHONY W. TABELL DELAFIELD, HARVEY, TABELL Dow-Jones Industrials (1200 p.m.) 998.25 S & P Composite (1200 p.m.) 136.29 Cumulative Index (12/16/82) 1477.39 A VERY MERRY CHRISTMAS TO ALL No stalemen' Of expression of opinion or any other matter herein conlolned IS, or Is to be deemed 10 be, directly or Indirectly, on offer or the SohCllotron of an offer to buy or sell any secvnly referred 10 or mentioned The mOiler rs presented merely for the convenlenCtl of the subscrrber WhIle we believe the s.ources of our Information to be relIable, we In no way represent or guarantee the occurOI;'( thereof nor of the statements mude hereIn Any action to be token by the subscrrber should be based on h,s own InVestIgatIon and information Janney Montgomery Scoll. Inc, as a corporallon, and lis offIcers or employees, may now have, or may later toke, positions or trades In respect 10 any securItIes mentlonl!d In thiS or any future Issue, and such pOSition may be different from any views now or hereafter eypressed In thiS or any other Inue Janney Montgomery Scott, Inc, which IS regIstered With the SEC os on Investment adVisor, may give adVice to Its Investment odvls.ory and othel customers Independently of any statements mode In Itlls or rn any other Issue Further Information on ony security mentioned herem IS aVailable on request