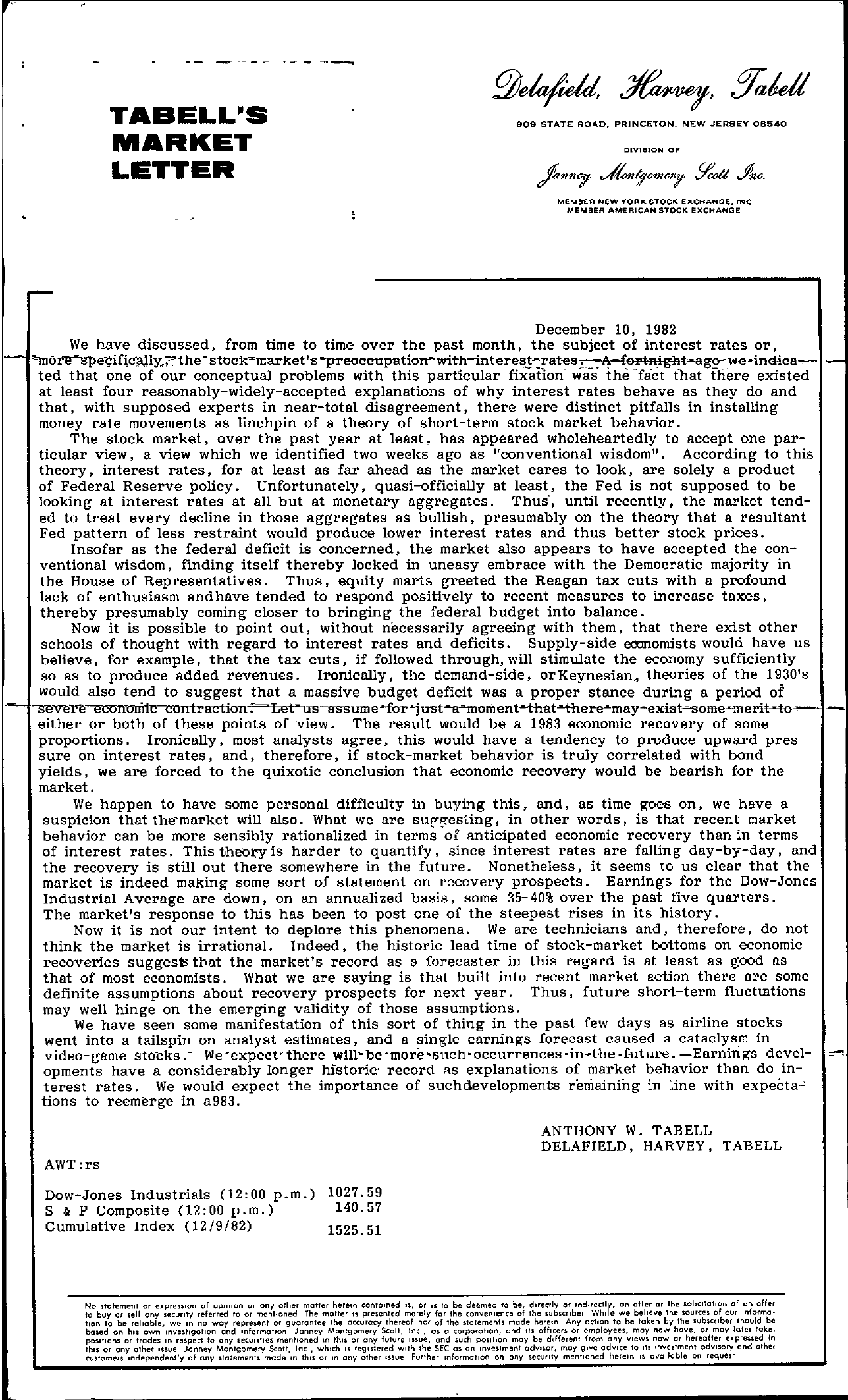 T TABELL'S MARKET LETTER 909 STATE ROAD, PRINCETON. NEW JERSEY 08540 DIVISION OF MEMSER NEW YORK STOCK EXCHANOE, tNC MEMBER AMERICAN STOCK EXCHANGe December 10, 1982 We have discussed, from time to time over the past month, the subject of interest rates or, morespeifcr!l.!IY.i''the-mock-market 's preoccupation-with-interefl!7ates !' A–f.gflt-aS!'-weindica- ted that one of our conceptual problems with this particular fixation was the fact fhat there existed at least four reasonably-widely-accepted explanations of why interest rates behave as they do and that, with supposed experts in near-total disagreement, there were distinct pitfalls in installing money-rate movements as linchpin of a theory of short-term stock market behavior. The stock market, over the past year at least, has appeared wholeheartedly to accept one par- ticular view, a view which we identified two weeks ago as conventional wisdom. According to this theory, interest rates, for at least as far ahead as the market cares to look, are solely a product of Federal Reserve policy. Unfortunately, quasi-officially at least, the Fed is not supposed to be looking at interest rates at all but at monetary aggregates. Thus', until recently, the market tend- ed to treat every decline in those aggregates as bullish, presumably on the theory that a resultant Fed pattern of less restraint would produce lower interest rates and thus better stock prices. Insofar as the federal deficit is concerned, the market also appears to have accepted the conventional wisdom, finding itself thereby locked in uneasy embrace with the Democratic majority in the House of Representatives. Thus, equity marts greeted the Reagan tax cuts with a profound lack of enthusiasm and have tended to respond positively to recent measures to increase taxes, thereby presumably coming closer to bringing the federal budget into balance. Now it is possible to point out, without necessarily agreeing with them, that there exist other schools of thought with regard to interest rates and deficits. Supply-side eomomists would have us believe, for example, that the tax cuts, if followed through, will stimulate the economy sufficiently so as to produce added revenues. Ironically, the demand-side, or Keynesian. theories of the 1930's would also tend to suggest that a massive budget deficit was a proper stance during a period of – – –seven–econlJlli1uontraution- L-et'us-assume-for-just-amOrfientthat–there-may-exist4!ome-merit–to….- either or both of these points of view. The result would be a 1983 economic recovery of some proportions. Ironically, most analysts agree, this would have a tendency to produce upward pressure on interest rates, and, therefore, if stock-market behavior is truly correlated with bond yields, we are forced to the quixotic conclusion that economic recovery would be bearish for the market. We happen to have some personal difficulty in buying this, and, as time goes on, we have a suspicion that the'market will also. What we are su,,)esting, in other words, is that recent market behavior can be more sensibly rationalized in terms of Ilnticipated economic recovery than in terms of interest rates. This theory is harder to quantify, since interest rates are falling day-by-day, and the recovery is still out there somewhere in the future. Nonetheless, it seems to us clear that the market is indeed making some sort of statement on recovery prospects. Earnings for the Dow-Jones Industrial Average are down, on an annualized basis, some 35-40 over the past five quarters. The market's response to this has been to post one of the steepest rises in its history. Now it is not our intent to deplore this phenomena. We are technicians and, therefore, do not think the market is irrational. Indeed, the historic lead time of stock-market bottoms on economic recoveries suggest'! that the market's record as 8 forecaster in this regard is at least as good as that of most economists. What we are saying is that built into recent market action there are some definite assumptions about recovery prospects for next year. Thus, future short-term fluctmtions may well hinge on the emerging validity of those assumptions. We have seen some manifestation of this sort of thing in the past few days as airline stocks went into a tailspin on analyst estimates, and a single earnings forecast caused a cataclysm in video-game stocks. – We 'expect' there will-be 'more 'snch'occurrences inAhe-future.–Earnings devel- opments have a considerably longer historic' record as explanations of market behavior than do interest rates. We would expect the importance of such developments remaining in line with expecta tions to reemerge in a983. AWT rs ANTHONY W. TAB ELL DELAFIELD, HARVEY, TABELL Dow-Jones Industrials (12 00 p.m.) 1027.59 S & P Composite (1200 p.m.) 140.57 Cumulative Index (12/9/82) 1525.51 No ,tatement or eXpreSSion of opinion or any other motler herem contolned 15, or 1 to be deemed 10 be, dlrettly or Indtrectly. on offer or the solICitation of an offer to buy o( sell any security referred to or mentioned The motter IS presented merely for the convenunce of the subSCriber While we believe the sources of our Information to be reliable, we In no way represent or guarantee the accuracy thereof nor of the slalemenh mude herein Any action 10 be token by the subscriber should be based on hiS own IOvestlgotlon and 1Oformotlon Janney Montgomery Scali, Inc, as a corporation, and lIs officers or employees, may now have, or may later toke, poSitions or trades 10 respect to any securities mentioned 10 thiS or any fu1\Jre 1Sl1fl, and such palhon may bl,l dlfferenl from any views now or hereafter elpressed In thiS or any other ISsue Janney Montgomery Scali, Inc, which IS registered Wllh the SEC as on 1Ovel1ment adVISor, may gIVe adVice to 115 Invcstment adVisory and olhel CUSlomeu Independently of any stalements made In thIS or In any other Issue Further information on any security menhoned herein 1 available on request