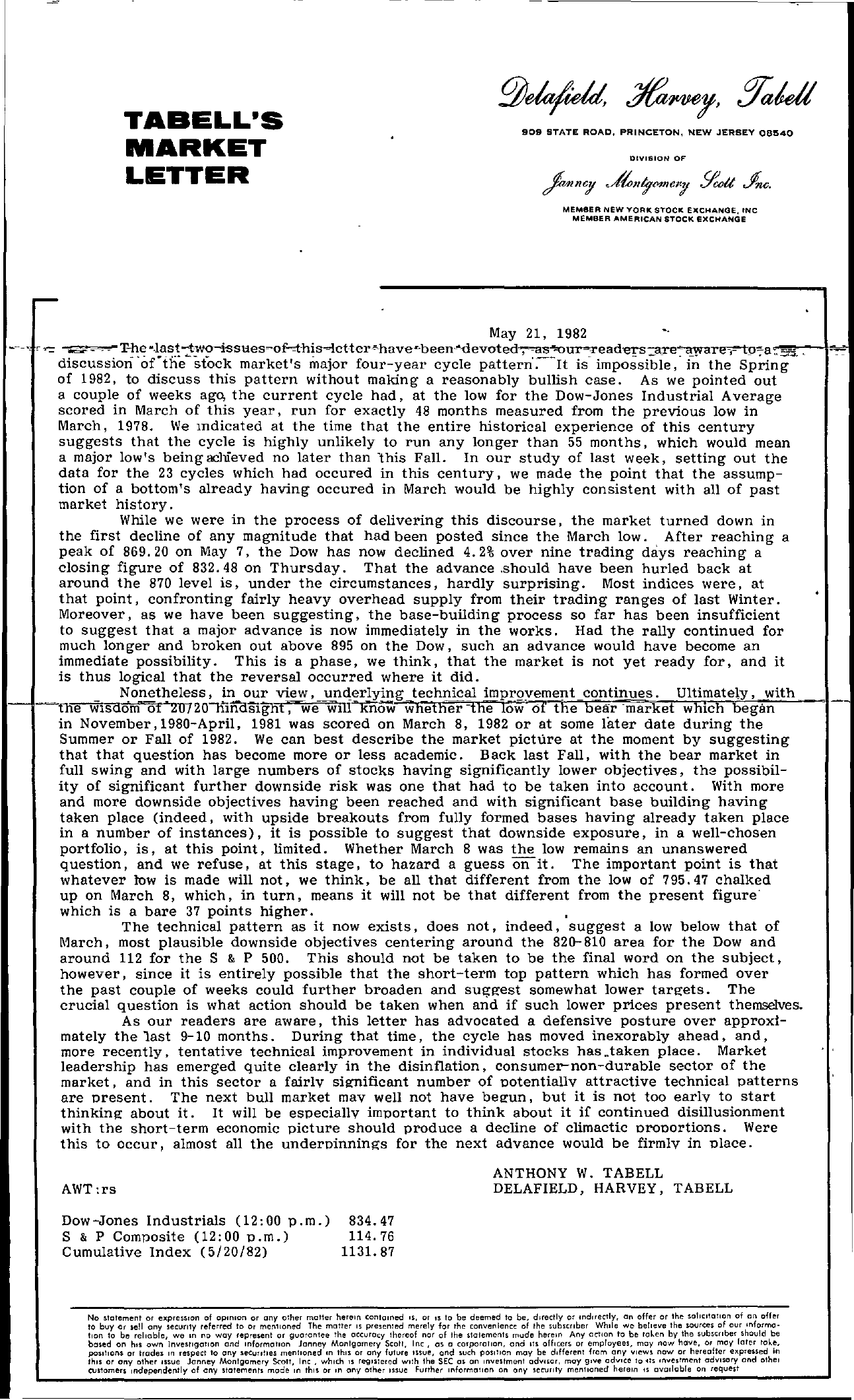 TABELL'S MARKET LETTER 909 STATE ROAD, PRINCETON, NEW JERSEY OB!54Q DIVISION OF MEMBER NEW YORK STOCK EXCHANGE, INC MEMBER ….MERICAN STOCK EXCHANGE May 21, 1982 4 – T-he ,last-two–iss1iesof-thiscHerhavebeen,'(jevoted-;-as'Our,readm-s-arearertoac–1… discussion 'oftiiitsock market's major four-year cycle pattern'—It is' impossible'- f;' the sprinit of 1982, to discuss this pattern without making a reasonably bullish case. As we pointed out a couple of weeks ago, the current cycle had, at the low for the Dow-Jones Industrial Average scored in March of this year, run for exactly 48 months measured from the previous low in March, 1978. We mdicated at the time that the entire historical experience of this century suggests that the cycle is highly unlikely to run any longer than 55 months, which would mean a major low's being achieved no later than this Fall. In our study of last week, setting out the data for the 23 cycles which had occured in this century, we made the point that the assump- tion of a bottom's already having occured in March would be highly consistent with all of past market history. While we were in the process of delivering this discourse, the market turned down in the first decline of any magnitude that had been posted since the March low. After reaching a peak of 869.20 on May 7, the Dow has now declined 4.2 over nine trading days reaching a closing figure of 832.48 on Thursday. That the advance .should have been hurled back at around the 870 level is, under the circumstances, hardly surprising. Most indices were, at that point, confronting fairly heavy overhead supply from their trading ranges of last Winter. Moreover, as we have been suggesting, the base-building process so far has been insufficient to suggest that a major advance is now immediately in the works. Had the rally continued for much longer and broken out above 895 on the Dow, such an advance would have become an immediate possibility. This is a phase, we think, that the market is not yet ready for, and it is thus logical that the reversal occurred where it did. Nonetheless, in our view, underlying technical improvement continues. Ultimately, with , – tne wisacirri ofU720mndsignt, we WIll K'now whether -the low' of the bear'market which began in November,1980-April, 1981 was scored on March 8, 1982 or at some later date during the Summer or Fall of 1982. We can best describe the market picture at the moment by suggesting that that question has become more or less academic. Back last Fall, with the bear market in full swing and with large numbers of stocks having significantly lower objectives, th2 possibil- ity of significant further downside risk Was one that had to be taken into account. With more and more downside objectives having been reached and with significant base building having taken place (indeed, with upside breakouts from fully formed bases having already taken place in a number of instances), it is possible to suggest that downside exposure, in a well-chosen portfOliO, is, at this point, limited. Whether March 8 was the low remains an unanswered question, and we refuse, at this stage, to hazard a guess on it. The important point is that whatever low is made will not, we think, be all that different from the low of 795.47 chalked up on March 8, which, in turn, means it will not be that different from the present figure' which is a bare 37 points higher. . The technical pattern as it now exists, does not, indeed, suggest a low below that of March, most plausible downside objectives centering around the 820-810 area for the Dow and around 112 for the S & P 500. This should not be taken to be the final word on the subject, however, since it is entirely possible that the short-term top pattern whiCh has formed over the past couple of weeks could further broaden and su;gest somewhat lower targets. The crucial question is what action should be taken when and if such lower prices present themselves. As our readers are aware, this letter has advocated a defensive posture over approxi- mately the 1ast 9-10 months. During that time, the cycle has moved inexorably ahead, and, more recently, tentative technical improvement in individual stocks has.taken place. Market leadership has emerged quite clearly in the disinflation, consumer-non-durable sector of the market, and in this sector a fairlv significant number of potentiallv attractive technical patterns are present. The next bull market mav well not have begun, but it is not too earlv to start thinking about it. It will be especially important to think about it if continued disillusionment with the short-term economic picture should produce a decline of climactic proportions. Were this to occur, almost all the underpinnings for the next advance would be firmly in place. AWTrs ANTHONY W. TABELL DELAFIELD, HARVEY, TABELL Dow-Jones Industrials (1200 p.m.) 834.47 S & P Composite (1200 p.m.) 114.76 Cumulative Index (5/20/82) 1131. 87 No tolement or eo;prCSSlon of opinion or any other matter herCln contained IS, or 15 to be deemed to be, directly or mdtrectly, on offer or the sollcllollon of on ofh!r to buy or sell any security referred to Or mentioned The matter IS presented merely for the convenienCE of the subscriber While NC believe the sources of aUf information to be reliable, we In no way represent or guorontee the accuracy thereof nor of the statements mude herem Any action to be talen by Ihe subSCriber should be bosed on IllS own investigation and Information Jonney Montgomery Scott, Inc, as a corporation, and III officers or employees, may now nave, or may later tole, POSitionS or trades In respect to any seCUrities mentioned In tnls or any future Issue, and such posilion moy be different from any views now or hereafter expressed In thiS or any other ISsue Janney Montgomery Scali, Inc, which IS regIStered With the SEC as on Investment adVisor, may gIve adVIce to ds ,nvestment advl!wry and athel customers Independently of any statements mode In Ihls or In any other Issue Further information on any scamty mentioned herein IS avolloble on request