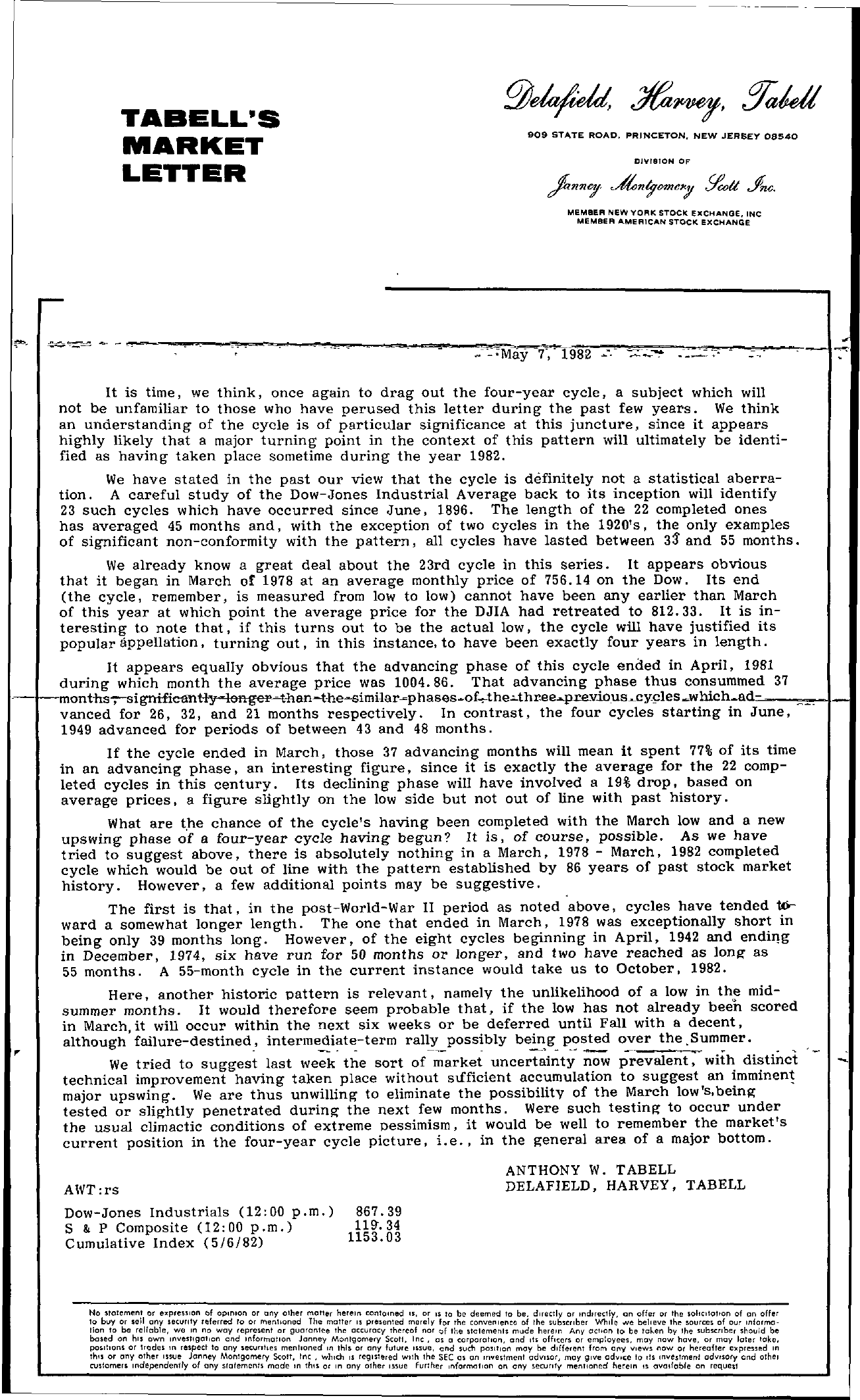 TABELL'S MARKET LETTER 909 STATE ROAD, PRINCETON, NEW JERSEY 08540 DIVII!IION OF MEMBER NEW YORK STOCI( EXCHANOE, INC MEMBER AMERICAN STOCK eXCHANGe ,,- It is time, we think, once again to drag out the four-year cycle, a subject which will not be unfamiliar to those who have perused this letter during the past few years. We think an understanding of the cycle is of particular significance at this juncture, since it appears highly likely that a major turning point in the context of this pattern will ultimately be identified as having taken place sometime during the year 1982. We have stated in the past our view that the cycle is definitely not a statistical aberration. A careful study of the Dow-Jones Industrial Average back to its inception will identify 23 such cycles which have occurred since June, 1896. The length of the 22 completed ones has averaged 45 months and, with the exception of two cycles in the 1920's, the only examples of significant non-conformity with the pattern, all cycles have lasted between 3l' and 55 months. We already know a great deal about the 23rd cycle in this series. It appears obvious that it began in March of 1978 at an average monthly price of 756.14 on the Dow. Its end (the cycle, remember, is measured from low to low) cannot have been any earlier than March of this year at which point the average price for the DJIA had retreated to 812.33. It is interesting to note that, if this turns out to be the actual low, the cycle will have justified its popular appellation, turning out, in this instance, to have been exactly four years in length. It appears equally obvious that the advancing phase of this cycle ended in April, 1981 during which month the average price was 1004.86. That advancing phase thus consummed 37 I–t-mont-hs.signifieanan-t-he-similarphases-of–the-threepreviouscyleswhichad,- 1 vanced for 26, 32, and 21 months respectively. In contrast, the four cycles starting in June, 1949 advanced for periods of between 43 and 48 months. If the cycle ended in March, those 37 advancing months will mean it spent 77 of its time in an advancing phase, an interesting figure, since it is exactly the average for the 22 completed cycles in this century. Its declining phase will have involved a 19 drop, based on average prices, a figure slightly on the low side but not out of line with past history. What are t,he chance of the cycle's having been completed with the March low and a new upswing phase of a four-year cycle having begun It is, of course, possible. As we have tried to suggest above, there is absolutely nothing in a March, 1978 – March, 1982 completed cycle which would be out of line with the pattern established by 86 years of past stock market history. However, a few additional points may be suggestive. The first is that, in the post-World-War II period as noted above, cycles have tended toward a somewhat longer length. The one that ended in March, 1978 was exceptionally short in being only 39 months long. However, of the eight cycles beginning in April, 1942 and endiI!g in December, 1974, six have run for 50 months or longer, and two have reached as long' as 55 months. A 55-month cycle in the current instance would take us to October, 1982. Here, another historic pattern is relevant, namely the unlikelihood of a low in the mid- summer months. It would therefore seem probable that, if the low has not already been scored in March, it will occur within the next six weeks or be deferred until Fall with a decent, although failure-destined, intermediate-term rally possibly being posted over the .Summer. – –…..- – —- We tried to suggest last week the sort of market uncertainty now prevalent, with distinct technical improvement having taken place without stfficient accumulation to suggest an imminent major upswing. We are thus unwilling to eliminate the possibility of the March low's,being tested or slightly penetrated during the next few months. Were such testing to occur under the usual climactic conditions of extreme pessimism, it would be well to remember the market's current position in the four-year cycle picture, i. e., in the general area of a major bottom. – AWTrs Dow-Jones Industrials (12 00 p.m.) S P Composite (12 00 p. m.) Cumulative Index (5/6/82) 867.39 119.34 1153.03 ANTHONY W. TABELL DELAFIELD, HARVEY, TABELL No talemenl or expre510n ()f opmlon or any other mOiler herein contolned IS, or IS 10 be deemed to be, dlredly or indirectly, an offer or the sohcltoltan of on offer to buy or sell any security referred to or menhoned The moiler IS presented merely for the convenlen!l of the subscriber While oNe believe the sources of our mformoIlon to be reliable, we ,n no way represent or guarantee Ihl! a'ura,y thereof nor of the stotements mude herem Any aClian to bl! taJ..en by the subscriber should be based on hiS own mvestlgatlon ond mformotlon Janney Montgomery SCOII, Inc, as a corporotlO, and Its officers or employees, may now have, or may later lake, pOSIIIOf\ or Irodes In respect 10 any secunhes menhoned In this or any future Issue, and such POSition may be different from any views now or hereafter expressed In thiS or any other Iue Janney Montgomery Scoll, tnc , which IS registered With the SEC as on Investment adVisor, may give adVice to Its Investment adVisory and othel customers Independenily of any statements mode In thrs or In any other Issue further ,nformat,on on any secuTify mentioned herein IS available on reque&,