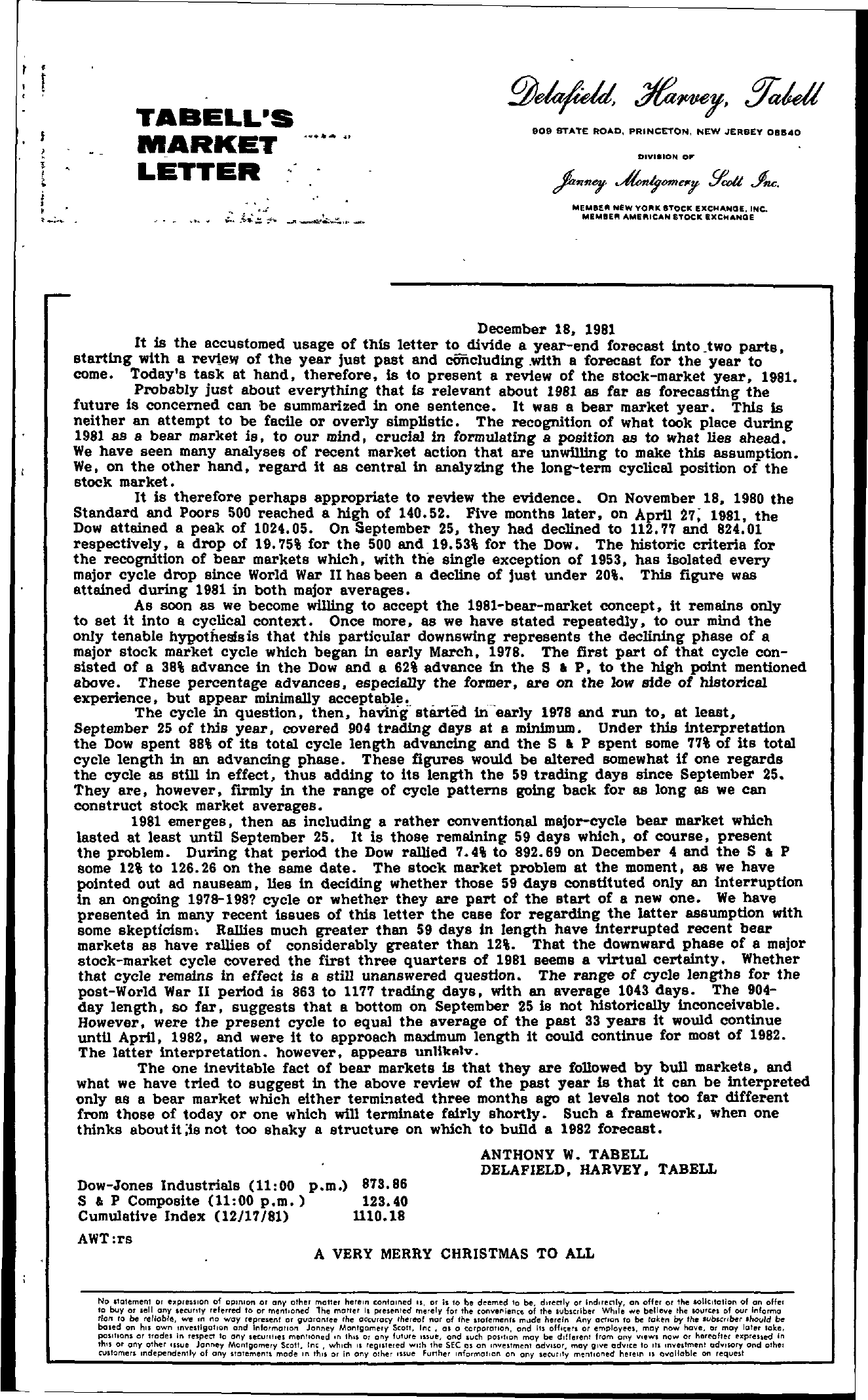 , r TABELL'S MARKET …….. , LETTER 909 STATE ROAD, PRINCETON, NEW JERSEY 08540 MEM.!fIII HEW VOflilK STOCK EXCHANGE, INC. MEMtlE,. AMUIICAN STOCK EXCHANOE December 18. 1981 It is the accustomed usage of this letter to divide a year-end forecast into .two partS. starting with a revtew of the year just past and cOncluding with a forecast for the year to come. Today's task at hand. therefore. is to present a review of the stock-market year. 1981. Probably just about everything that is relevant about 1981 as far as forecasting the future is concerned can be summarized in one sentence. It was a bear market year. This is neither an attempt to be facile or overly simplistic. The recognition of what took place during 1981 as a bear market is. to our mind. crucial in formulating a position as to what lies ahead. We have seen many analyses of recent market action that are unwilling to make this assumption. We. on the other hand. regard it as central in analyzing the long-term cyclical position of the stock market. It is therefore perhaps appropriate to review the evidence. On November 18. 1980 the Standard and Poors 500 reached a high of 140.52. Five months later. on April 27; 1981 the Dow attained a peak of 1024.05. On September 25. they had declined to 112.77 and 82401 respectively. a drop of 19.75 for the 500 and 19.53 for the Dow. The historic criteria for the recognition of bear markets which. with the single exception of 1953. has isolated every major cycle drop since World War II has been a decline of just under 20. This figure was attained during 1981 in both major averages. As soon as we become willing to accept the 1981-bear-market concept. it remains only to set it into a cyclical context. Once more. as we have stated repestedly. to our mind the only tenable hypotfteslsis that this particular downswing represents the declining phase of a major stock market cycle which began in early March, 1978. The first part of that cycle consisted of a 38 advance in the Dow and a 62 advance in the S P, to the high point mentioned above. These percentage advances. especially the former, are on the low side of historiCal experience. but appear minimally acceptable. The cycle in question. then. having'- started in early 1978 and run to. at least. September 25 of this year, covered 904 trading days at a minimum. Under this interpretation the Dow spent 88 of its total cycle length advancing and the S P apent some 77 of its total cycle length in an advancing phase. These figures would be altered somewhat if one regards the cycle as still in effect, thus adding to its length the 59 trading days aince September 25. They are. however. firmly in the range of cycle patterns going back for as long as we can construct stock market averages. 1981 emerges, then as including a rather conventional major-cycle bear market which lasted at least until September 25. It is those remaining 59 days which, of course, present the problem. During that period the Dow raIUed 7.4 to 892.69 on December 4 and the S P some 12 to 126.26 on the same date. The stock market problem at the moment. as we have pointed out ad nauseam, lies in deciding whether those 59 days constituted only an interruption in an ongoing 1978-198 cycle or whether they are part of the start of a new one. We have presented in many recent issues of this letter the case for regarding the latter assumption with some skepticism, RaIUes much greater than 59 days in length have interrupted recent bear markets as have raIUes of considerably greater than 12. That the downward phase of a major stock-market cycle covered the first three quarters of 1981 seems a virtual certainty. Whether that cycle remains in effect is a still unanswered question. The range of cycle lengths for the post-World War II period is 863 to 1177 trading days. with an average 1043 days. The 904day length, so far, suggests that a bottom on September 25 is not historically inconceivable. However, were the present cycle to equal the average of the past 33 years it would continue until April. 1982, and were it to approach maximum length it could continue for most of 1982. The latter interpretation. however, appears unlikAlv. The one inevitable fact of bear markets is that they are followed by bull markets. and what we have tried to suggest in the above review of the past year is that it can be interpreted only as a bear market which either termbated three months ago at levels not too far different from those of today or one which will terminate fairly shortly. Such a framework. when one thinks aboutit ;is not too shaky a structure on which to build a 1982 forecast. Dow-Jones Industrials (1100 p.m.) 873.86 S P Composite (1100 p.m. ) 123.40 Cumulative Index (12117181) UI0.IS ANTHONY W. TABELL DELAFIELD, HARVEY. TABELL AWTrs A VERY MERRY CHRISTMAS TO ALL No Qlement or e;llpreUlon of OPinion or ony other matter hereIn c.onlolned U, or is 10 be deemed 10 be, directly or Indirectly, on offer or the OlIe,lotlon of on offer to buy or lell any security referred to or mentIoned Tne motter I, presented merely for the convefllen. of the subscriber wtllie we believe Ihe lOurces of our Informo tlon to be rellobl, we In no way represent or 'JIIClranfee the occurocy theren! flO! ot the Iforemenr. mude herein Any OC'f,on 10 be taken by the subscrtber lhoi.Jld be based on hiS own Inveulgot,on and informatIon Jonney Montgomery Scot!, Inc, 010 (orporOllOn, and Its offlters or employees, mey now have, or moy loter toke, posItIons or trodes In respect to ony securitIes mentIoned In thIS or any future luue, and such POS',on rn.ay be dIfferent from ony vIews now or hereafter expressed In thIS or ony other 'nue Janney Montgomery Sea!!, Inc, whIch IS regIsTered WIth rhe SEC 0 on ,VestmenT adVISor, may gIve adVICe to lili Investment adVISOry ond othel C'Ustarners Independen11y of any OTemen mode In th or In any other sue Funner InformatIon on any ecunly ment.oned hereIn IS ovolloble on request