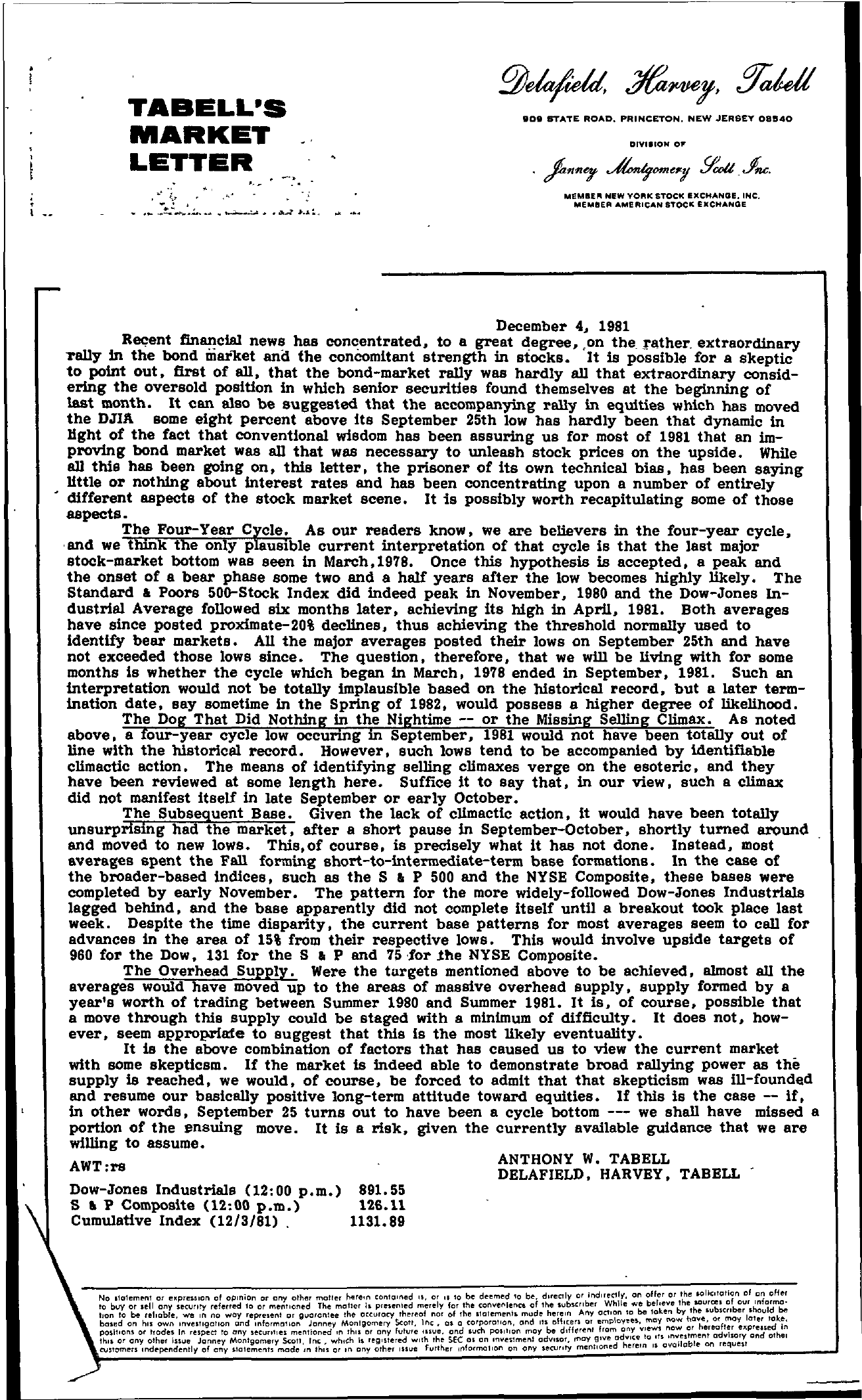 TABELL'S MARKET LETTER . ……….. ' …. i. -…. ,, ,,.. …. … 808 STATE ROAD. PRINCETON. NEW JERSEY 08540 MM8 NEW VOAI( STOCK EXCHANGE, INC. MEMBEA AMEAICAN STOCK EXCHANQE December 4, 1981 Rent finm.cial new has concentrated. to a great degree, ,on the. .rather. extraordinary l'ally in the bond marKet and the concomitant strength in stocks. It is possible for a skeptic to point out. first of all. that the bond-market rally was hardly all that extraordinary consid- ering the oversold position in which senior securities found themselves at the beginning of last month. It can also be suggested that the accompanying rally in equities which has moved the DJIA. BOme eight percent above its September 25th low has hardly been that dynamic in Hght of the fact that conventional wisdom has been assuring us for most of 1981 that an im- proving bond market was all that was necessary to unleash stock prices on the upside. While all this has been going on. this letter. the priBOner of its own technical bias. has been saying Httle or nothing about interest rates and has been concentrating upon a number of entirely different aspects of the stock market scene. It is possibly worth recapitulating some of those aspects. -and we The Four-Year think the only Cpfa.culsei.bleAscuorurer readers know. we are believers nt interpretation of that cycle is in the four-year cycle, that the last major stock-market bottom was seen in March.1978. Once this hypothesis is accepted. a peak and the onset of a bear phase some two and a half years after the low becomes highly likely. The Standard. Poors 50o-Stock Index did indeed peak in November, 1980 and the Dow-Jones In- dustrial Average followed six months later. achieving its high in April, 1981. Both averages have since posted proximate-20 declines, thus achieving the threshold normally used to identify bear markets. All the major averages posted their lows on September 25th and have not exceeded those lows since. The question. therefore. that we will be living with for BOme months is whether the cycle which began in March. 1978 ended in September. 1981. Such an interpretation would not be totally implausible based on the historical record. but a later term- ination date. ssy sometime in the Spring of 1982. would possess a higher degree of likelihood. The Dog That Did Nothing in the Nightime — or the Missing Selling Climax. As noted above. s four-year cycle low occuring in September, 1981 would not have been totally out of line with the historical record. However. such lows tend to be accompanied by identifiable climactic action. The means of identifying selling climaxes verge on the esoteric. and they have been reviewed at BOme length here. Suffice it to say that. in our view. such a climax did not manifest itself in late September or early October. The Subsequent Base. Given the lack of climactic action. it would have been totally unsurprising had the market. after a short pause in September-October, shortly turned around and moved to new lows. This.of course. is precisely what it has not done. Instead, most averages spent the Fall forming short-to-intermediate-term base formations. In the case of the broader-based indices. such as the S P 500 and the NYSE Composite, these bases were completed by early November. The pattern for the more widely-followed Dow-Jones Industrials lagged behind. and the bsse apparently did not complete itself until a breakout took place last week. Despite the time disparity. the current base patterns for most averages seem to call for advances in the area of 15 from their respective lows. This would involve upside targets of 960 for the Dow. 131 for the S P and 75 -for ihe NYSE Composite. The Overhead Supply. Were the targets mentioned above to be achieved, almost all the averages would have moved up to the areas of massive overhead supply. supply formed by a year's worth of trading between Summer 1980 and Summer 1981. It is, of course, possible that a move through this supply could be staged with a minimum of difficulty. It does not, how- ever. seem approp.riafe to suggest that this is the most likely eventuality. It is the above combination of factors that has caused us to view the current market with BOme skepticsm. If the market is indeed able to demonstrate broad rallying power as the supply is reached. we would. of course. be forced to admit that that skepticism was ill-founded and resume our basically positive long-term attitude toward equities. If this is the case – if. in other words. September 25 turns out to have been a cycle bottom — we shall have missed a portion of the ensuing move. It is a risk. given the currently available guidance that we are willing to assume. AWTrs ANTHONY W. TAB ELL DELAFIELD. HARVEY. TABELL – Dow-Jones Industrials (1200 p.m.) 891. 55 S P Composite (1200 p.m.) 126.11 Cumulative Index (12/3/81) 1131. 89 No 1101em&nt or expreSSion of opmion or any other motter I-tere.n contolned IS, or 10 be deemed 10 be, dIreCTly or IndlreC1ly, on offer or te 50llelloll,;n of If I to buy or sell any secuflly referred 10 or mentIoned The motler II, presented merely for the converlena of Ihe subsCriber While we belkeve eturb\o ursho d tlon to be rehable we In no way represent or guarantee Ihe accuracy Thereof nor of Ihe statemenh. mude hereIn Any based on hl own'lnvestlgatlon and InformatIon Jonney Montgomery Scott, Inc, as a corporatIon, ond Its oHlcen or dposillons or trades In respect to any secunhes mentioned In thIS or any fulure nIue, and such pOSItIon moy be dIfferent aC1lon 10 be to efmropmloyeneys,v;meway en now nOheee''urofteroIr(lpotreeuetodkei ns;ent advisory and othe, th or ony other Issue Janney Montgomery 5011, Inc, whuh Is regIstered WIth the SEC as on Investment adVISor, may gld hln, saalloble on request customers ,ndependently of ony ,Iolements mode 111 Ihls or In any olher Issue fvrther 1r'lIOrmallon on ony secuflty mer'lllO