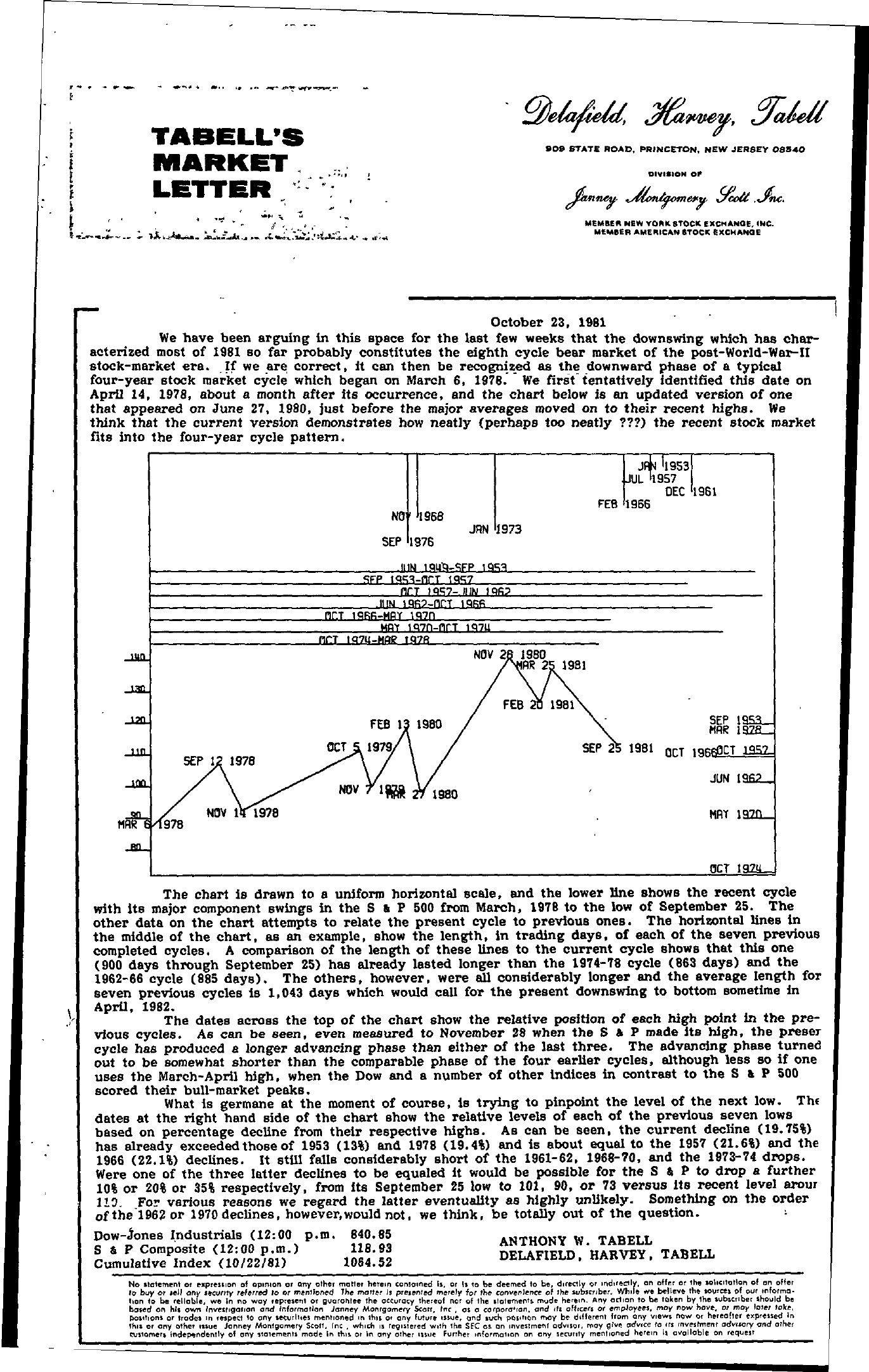 f TABELL'S i MARKET … -..,' I LETTER I 809 STATE ROAD, PRINCETON. HEW JERSEY 08540 MEMBE' NEW YO STOCK EXCHANGE. INC. ME'BEA AMEfIlICN iIlTOeK f!ItCHAfrtOE October 23. 1981 We have been arguing in this space for the last few weeks that the downswing which has characterized most of 1981 so far probably constitutes the eighth cycle bear market of the post-World-War-II stock-market era. . f we .ar correct. it can then be recognz.ed as the downward phase of a typical four-year stock market cycle which began on March 6. 1978. We first tentatively Identified this date on April 14. 1978. sbout a month after its occurrence, and the chart below is an updated version of one that appeared on June 27. 1980, just before the major averages moved on to their recent highs. We think that the current version demonstrates how neatly (perhaps too neatly) the recent stock market fits into the four-year cycle pattern. NO 1968 SEP 1976 JRN 1973 J 1953 UL 1957 DEC 1961 FEB 1966 SEP 1 MAR 1 SEP 2 1961 OCT 196CT OCT 1 The chart is drawn to a uniform horizontal scale, and the lower Une shows the recent cycle with its major component swings in the S P 500 from March, 1978 to the low of September 25. The other dsta on the chart attempts to relate the present cycle to previous ones. The horizontal Unes in the middle of the chart, as an example, show the length, in trsding days, of each of the seven previous completed cycles. A comparison of the length of these Unes to the current cycle shows that this one (900 daya through September 25) has already lasted longer than the 1974-78 cycle (863 days) and the 1962-66 cycle (885 days). The others, however, were all considerably longer and the average length for seven previous cycles is 1,043 dsys which would call for the present downswing to bottom sometime in April, 1982. The dates across the top of the chart show the relative position of each high point in the pre- vious cycles. As can be seen, even measured to November 28 when the S P made its high. the preseT cycle has produced a longer advancing phase than either of the last three. The advancing phase turned out to be somewhat shorter than the comparable phase of the four earlier cycles, although less so if one uses the March-April high, when the Dow and a number of other indices in contrast to the S P 500 scored their bull-market pesks. What is germane at the moment of course, is trying to pinpoint the level of the next low. Th. dates at the right hand side of the chart show the relative levels of each of the previous seven lows based on percentage decline from their respective highs. As can be seen, the current decline (19.75) has already exceeded those of 1953 (13) and 1978 (19.4) and is about equal to the 1957 (21.6) and the 1966 (22.1) declines. It stU! falls considerably short of the 1961-62, 1968-70, and the 1973-74 drops. Were one of the three latter declines to be equaled it would be possible for the S P to drop a further 10 or 20 or 35 respectively, from its September 25 low to 101, 90. or 73 versus its recent level arour 11'. .Fo!' various reasons we regard the latter eventuality ss highly unlikely. Something on the order of the 196 or 1970 declines, however,would not, we think, be totally out of the question. Dow-Jones I,ndustrials (1200 p.m. 840.85 S 6 P Composite (1200 p.m.) 1l8.93 Cumulative Index (10/22/81) 1064.52 ANTHONY W. TABELL DELAFIELD, HARVEY, TAB ELL No clement Of eJq)reulon of opinion or any other motter here.n contolned b, or Il to be deemed to be, directly or ,ndtrectl'l, on offer or the 1011(11011011 of on offer to hl.Jyor noll anr. leoJflty referred to or menlioned The molter If pre.enled merely for 1M- convleme of Ine Subscnber, Willie He believe the source, of OUf .nformation to be lellob e, we in no way ,epreSl,' or guorol\lee the C1'UrOty thereof nor of the Iloteroel'lh. mude here.n. Any action to be token by the lubCTlber should be bOled on hi' own invetlgaflon ond /nformollotl jann1Y MOlHgomery ScOtf, Inc. 0 (I corpora'ron, and III a/hee or mpJoyeeJ, may ow hov, or mol' loter tDkt!', poSItions or trodes In respett to emy leeulihes mentloed In thIS DI ony fUlure Issue, and Ivth pCSITlon IT'oOy be different from any views nC)W or hereafter expressed In thIS or any OfheI ,uue Janney Montgomery Scooff, (nc , which II registered w.th Ihe SEC OJ on Investment adVisor, may give odvlCe to IfS (fTvestment odw'Ory ond othCr !Vstomer, ITldendently of ony slOlementl mode In thn 01 In ony other .uue FUrlhet ,iormohon on ony setunty mentioned here, I, ovolloble on request