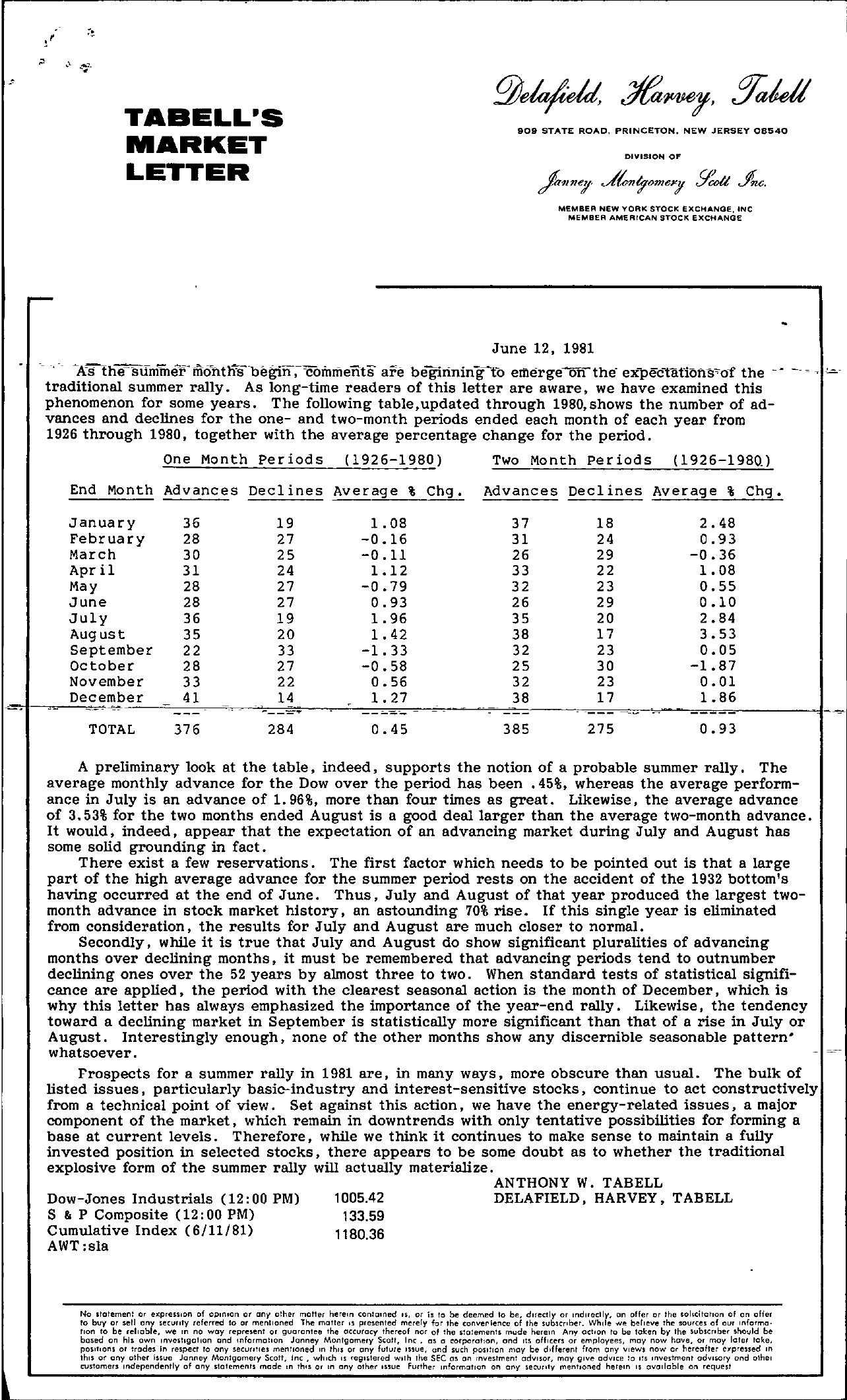 ., TABELL'S MARKET LETTER 909 STATE ROAD, PRINCETON. NEW JERSEY 08540 DIVISION OF MEMBER NEW VORK STOCK eXCHANGE, INC MEMBER AMERICAN STOCK EXCHANGE June 12. 1981 -As the-surrifuer montnsbegin .–comments are beginning-to emerge()flthe ex-pectlltins'o-f the traditional summer rally. As long-time readers of this letter are aware. we have examined this phenomenon for some years. The following table.updated through 1980.shows the number of advances and declines for the one- and two-month periods ended each month of each year from 1926 through 1980. together with the average percentage change for the period. One Month Per iods (1926-1980) Two Month Periods (1926-1980.) End Month Advances Declines Average Chg. Advances Declines Average Chg. January February March April May June July August September October November December 36 28 30 31 28 28 36 35 22 28 33 41 19 1.08 27 -0.16 25 -0.11 24 1.12 27 -0.79 27 0.93 19 1. 96 20 1. 42 33 -1. 33 27 -0.58 22 0.56 14 1. 27 – – TOTAL 376 284 0.45 37 18 31 24 26 29 33 22 32 23 26 29 35 20 38 17 32 23 25 30 32 23 38 17 385 275 2.48 0.93 -0.36 1.08 0.55 0.10 2.84 3.53 0.05 -1.87 0.01 –1. 86 — 0.93 A preliminary look at the table. indeed. supports the notion of a probable summer rally. The average monthly advance for the Dow over the period has been .45. whereas the average perform- ance in July is an advance of 1. 96. more than four times as great. Likewise. the average advance of 3.53 for the two months ended August is a good deal larger than the average two-month advance. It would. indeed. appear that the expectation of an advancing market during July and August has some solid grounding in fact. There exist a few reservations. The first factor which needs to be pointed out is that a large part of the high average advance for the summer period rests on the accident of the 1932 bottom's having occurred at the end of June. Thus. July and August of that year produced the largest twomonth advance in stock market history. an astounding 70 rise. If this single year is eliminated from consideration. the results for July and August are much closer to normal. Secondly. while it is true that July and August do show significant pluralities of advancing months over declining months. it must be remembered that advancing periods tend to outnumber declining ones over the 52 years by almost three to two. When standard tests of statistical significance are applied. the period with the clearest seasonal action is the month of December. which is why this letter has always emphasized the importance of the year-end rally. Likewise. the tendency toward a declining market in September is statistically more significant than that of a rise in July or August. Interestingly enough. none of the other months show any discernible seasonable pattern' whatsoever. Frospects for a summer rally in 1981 are. in many ways. more obscure than usual. The bulk of listed issues. particularly basiindustry and interest-sensitive stocks. continue to act constructively from a technical point of view. Set against this action. we have the energy-related issues. a major component of the market. which remain in downtrends with only tentative possibilities for forming a base at current levels. Therefore. while we think it continues to make sense to maintain a fully invested position in selected stocks. there appears to be some doubt as to whether the traditional explosive form of the summer rally will actually materialize. ANTHONY W. TAB ELL Dow-Jones Industrials (12 00 PM) 1005.42 DELAFIELD. HARVEY. TABELL S & P Composite (12 00 PM) 133.59 Cumulative Index (6/11/81) AWTsla 1180.36 No statement or expressIon of opinIon or any other matler herem contOlned 1, or is 10 be deemed to be, directly or indirectly. on offer or the sollcitotlon of on offer to buy or sell ony security referred 10 or mentioned The molter ,s presented merely for the converlencc of the subscrIber. While .ne believe the sources of our Informa tlon to be reliable, we In no way represent or guarantee the accuracy thereof nor of the statements mude herem Any action to be token by the subscriber should be bosed on his own Investigation and Information Janney Montgomery Scott, Inc, as a corporahon, and lIs officers or employees, may now have, or may later take, poslhons or Irodes In respect to any SeCUrities mentioned In thiS or any future Issue, ond such POSition moy be different from any views now or hereofter e1pressed In thiS or any other Inuc Janncy Montgomery Scott, tnc, which IS registered With the SEC os on mvestmenl odvlsor, may give adVice to Its mvestment adVisory ond olhel customers Independently of ony statements made m Ih.s or In any other ISsue Further information on al'ly seC\Jlty menhoned herein IS ovoiloble on request l