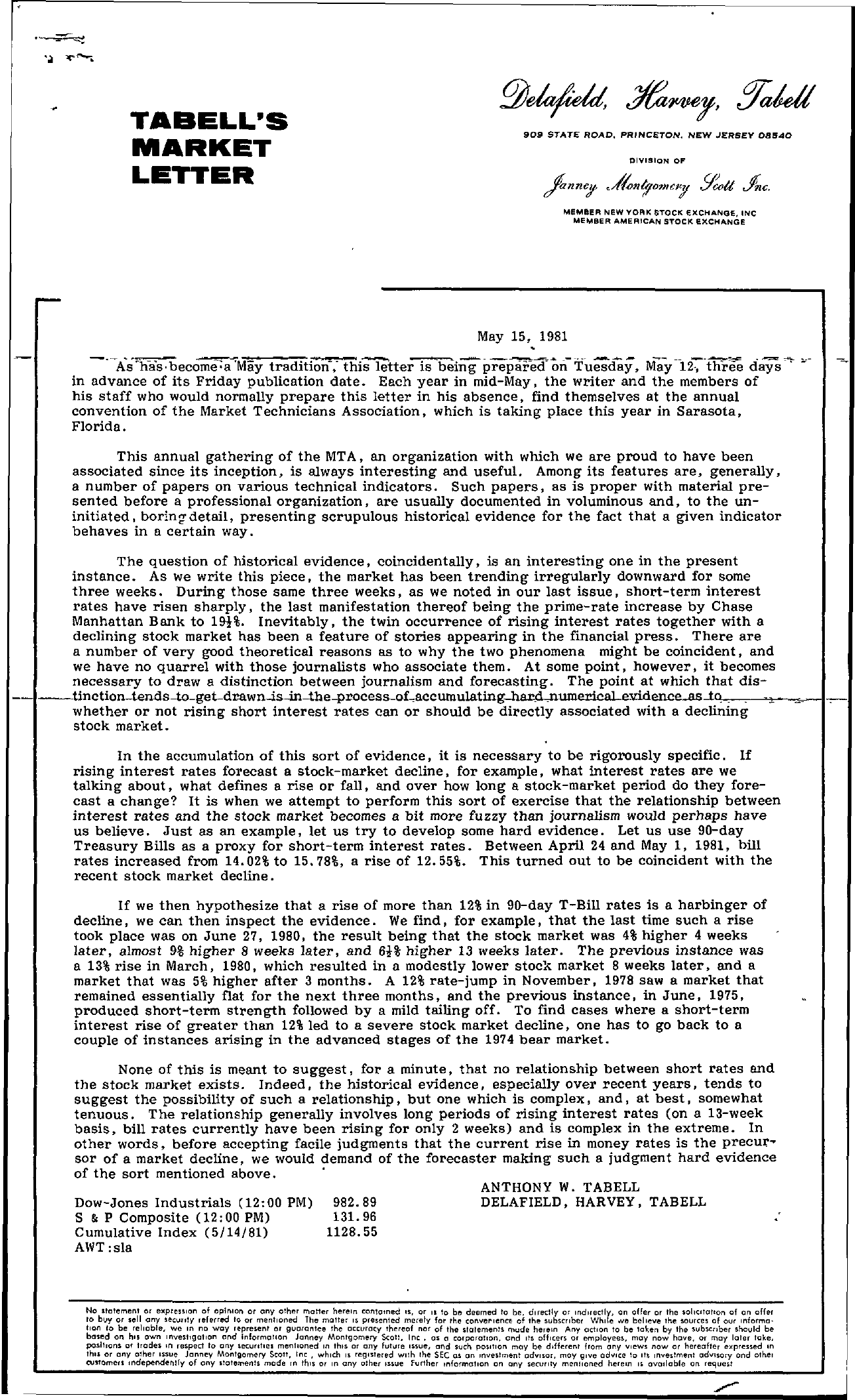 TABELL'S MARKET LETTER 909 STATE ROAD, PRINCETON, NEW JERSEY 08540 DIVISION OF MEMBER NEW VORK STOCK eXCHANGE, INC MEMBER AMERICAN STOCK eXCHANGE May 15, 1981 – – – – .- — — –.-As .h-a.s' b.ec-om.e;-a 'May tradition; this letter is being p- -re–p-a-r—e-d-' on -T—uesday, May 12, three days–.-,, — ;.- in advance of its Friday publication date. Each year in mid-May, the writer and the members of his staff who would normally prepare this letter in his absence, find themselves at the annual convention of the Market Technicians Association, which is taking place this year in Sarasota, Florida, This annual gathering of the MTA, an organization with which we are proud to have been associated since its inception, is always interesting and useful. Among its features are, generally, a number of papers on various technical indicators. Such papers, as is proper with material presented before a professional organization, are usually documented in voluminous and, to the uninitiated, boring detail, presenting scrupulous historical evidence for the fact that a given indicator behaves in a certain way. The question of historical evidence, coincidentally, is an interesting one in the present instance. As we write this piece, the market has been trending irregularly downward for some three weeks. During those same three weeks, as we noted in our last issue, short-term interest rates have risen sharply, the last manifestation thereof being the prime-rate increase by Chase Manhattan Bank to 19H. Inevitably, the twin occurrence of rising interest rates together with a declining stock market has been a feature of stories appearing in the financial press. There are a number of very good theoretical reasons as to why the two phenomena might be coincident, and we have no quarrel with those journalists who associate them. At some point, however, it becomes necessary to draw a distinction between journalism and forecasting. The point at which that dis- – –tinctiontendstogetd1Swn-is-in-theprocess-of.accumulating-hsrd ,nllmericaLeY.idenceas.iuQ,1 whether or not rising short interest rates can or should be directly associated with a declining stock market. In the accumulation of this sort of evidence, it is necessary to be rigorously specific, If rising interest rates forecast a stock-market decline. for example, what interest rates are we talking about. what defines a rise or fall. and over how long a stock-market period do they forecast a change It is when we attempt to perform this sort of exercise that the relationship between interest rates and the stock market becomes a bit more fuzzy than journalism would perhaps have us believe. Just as an example. let us try to develop some hard evidence. Let us use 90-day Treasury Bills as a proxy for short-term interest rates. Between April 24 and May 1, 1981, bill rates increased from 14.02 to 15.78, a rise of 12.55. This turned out to be coincident with the recent stock market decline. If we then hypothesize that a rise of more than 12 in 90-day T-Bill rates is a harbinger of decline, we can then inspect the evidence. We find, for example, that the last time such a rise took place was on June 27, 1980, the result being that the stock market was 4 higher 4 weeks later, almost 9 higher 8 weeks later, and 6H higher 13 weeks later. The previous instance was a 13 rise in March, 1980, which resulted in a modestly lower stock market 8 weeks later, and a market that was 5 higher after 3 months. A 12 rate-jump in November, 1978 saw a market that remained essentially flat for the next three months, and the previous instance, in June, 1975, produced short-term strength fOllowed by a mild tailing off. To find cases where a short-term interest rise of greater than 12 led to a severe stock market decline. one has to go back to a couple of instances arising in the advanced stages of the 1974 bear market. None of this is meant to suggest, for a minute, that no relationship between short rates and the stock market exists. Indeed, the historical evidence, especially over recent years, tends to suggest the possibility of such a relationship, but one which is complex, and, at best, somewhat tenuous. The relationship generally involves long periods of rising interest rates (on a 13-week basis, bill rates currently have been rising for only 2 weeks) and is complex in the extreme. In other words, before accepting facile judgments that the current rise in money rates is the precuJ- sor of a market decline, we would demand of the forecaster making such a judgment hard evidence of the sort mentioned above. ' ANTHONY W. TAB ELL Dow-Jones Industrials (1200 PM) 982.89 DELAFIELD, HARVEY, TABELL S & P Composite (12 00 PM) 131. 96 Cumulative Index (5/14/81) 1128.55 AWT sla No stclement or expreulon of opinion or any olher matter herein CaT1lomed IS, or II to be deemed to be, directly or Indirectly, on offer or Ihe sOllCltOtion of on offer to bvy Of sell (lny security referred 10 or mentioned The malter IS presented mNely for the converlenn of Ihe subscriber While oNe believe the sources of our Informo lion to be reliable, we In no way represent or guorontee the occurocy thereof nor of the stotements mude herein Any action to be token by the subSCriber should be oo1ed on hiS own Investlgotlon ond Informohon Jonney Montgomery Scott, Inc, as 0 corporation, and liS officers or employees, moy now have, or may later toke, poslhons Of trades In respect to ony U!CUrllie1 menlloned In thiS or on.,. fulure Issue, (lod such POSition may be different from ony views now or hereofter expressed In IhlS or ony olher Issue Janney Montgomery Scoll, Inc, which IS registered wllh the SEC as on Investment odvisar, may give odvlce to It Investment adVISOry ond othel (USlomC!rs Independently of any statements mode In Ihls or In (lny other Issue further Informolion on any security mentioned herein IS available on request