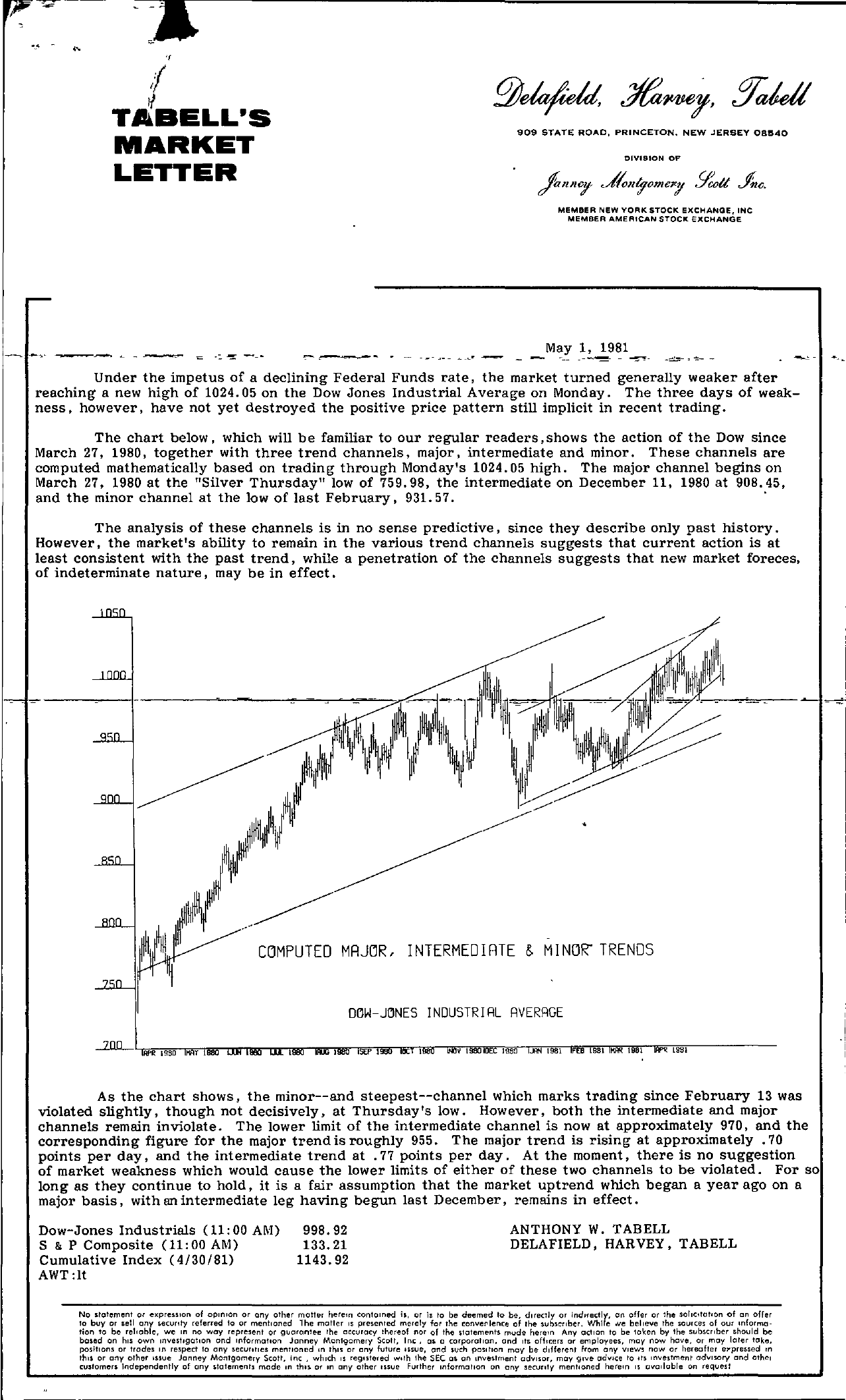 'f / TA'BELL'S MARKET LETTER 909 STATE ROAD, PRINCETON. NEW JERSEY 08!S40 DIVISION OF MEMBER New VORK STOCK EXCHANGe, INC MEMBER AMERICAN STOCK EXCHANGE May 1, 1981 r -! . -……. – Under the impetus of a declining Federal Funds rate, the market turned generally weaker after reaching a new high of 1024.05 on the Dow Jones Industrial Average on Monday. The three days of weakness, however, have not yet destroyed the positive price pattern still implicit in recent trading. The chart below, which will be familiar to our regular readers,shows the action of the Dow since March 27, 1980, together with three trend channels, major, intermediate and minor. These channels are computed mathematically based on trading through Monday's 1024.05 high. The major channel begins on March 27, 1980 at the Silver Thursday low of 759.98, the intermediate on December 11, 1980 at 908.45, and the minor channel at the low of last February, 931. 57. . The analysis of these channels is in no sense predictive, since they describe only past history. However, the market's ability to remain in the various trend channels suggests that current action is at least consistent with the past trend, while a penetration of the channels suggests that new market foreces, of indeterminate nature, may be in effect. COMPUTED MRJOR, INTERMEDIRTE & MINO TRENDS DOW-JONES INDUSTRIRL RVERRGE As the chart shows, the minor–and steepest–channel which marks trading since February 13 was violated slightly, though not decisively, at Thursday's low. However, both the intermediate and major channels remain inviolate. The lower limit of the intermediate channel is now at approximately 970, and the corresponding figure for the major trend is roughly 955. The major trend is rising at approximately .70 points per day, and the intermediate trend at .77 points per day. At the moment, there is no suggestion of market weakness which would cause the lower limits of either of these two channels to be violated. For long as they continue to hold, it is a fair assumption that the market uptrend which began a year ago on a major basis, with an intermediate leg having begun last December, remains in effect. Dow-Jones Industrials (11 00 AM) S & P Composite (11 00 AM) Cumulative Index (4/30/81) AWT It 998.92 133.21 1143.92 ANTHONY W. TABELL DELAFIELD, HARVEY, TABELL No tolement or expressIon of opinion or any olher mOIler herein contolned is, or 1 10 be deemed to be, dHeC1ly or lndlfettly, on offer or Ihe sollc.tot.on of on offer to buy or sell ony security referred 10 or mentioned The motter IS presented merely for the convef'lence of the subscriber. While Ne believe Ihe sources of our information 10 be relloble, we In no woy represent or gvarafltee the accvracy thereof nor of the statements mude herein Any action to be token by the subscriber should be based on hiS own Investlgotlon ond Informallon JOnfley Montgomery Scott, Inc, os a corporation, ond Its officers or employees, may now have, or may later toke, position, or trades In respect to any securities mentioned In Ih,s or any future lSue, and luch POSition may be different from any views now or hereafter elpressed III thl or any other Issue Jonney Montgomery coII, Inc, whICh 15 registered With the SEC os on Investment adVisor, moy give adVice to Its Investment adVISOry ond othlll customers Independently of any statements mode ,n tnn or III any other ISsue Further information on any secvroty mentioned herein IS availoble on request